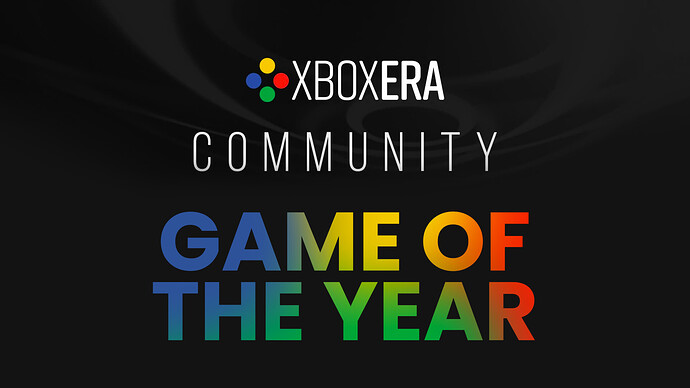 This means we can look back at the games we’ve played and enjoyed. To celebrate the year 2022 in gaming we’ve created a XboxEra Community Game of the Year Awards vote. At XboxEra we enjoy all platforms and all games. So, all platforms are eligible. If you enjoyed an amazing Stadia exclusive (RIP), include it in your list!

If there aren’t 10 games you’ve played or enjoyed enough to put on your list, then it’s fine to nominate less than 10 titles. You need to put at least 1 2022 game in your list for your vote to be eligible.

Oh, and we’d love to see some explanations why you’ve picked what you’ve picked. It’s fun to read! And if you’re lucky we’ll include it in the Game of the Year thread. Like we did for 2021.

1: Elden Ring: Not the biggest Souls fan, but it had been a while since I’ve played a Souls game and therefore it felt fresh. Had a lot more fun with this game than I originally expected and the art design is beyond excellent. I have some minor issues with the game, but not enough to displace it from my number one spot.

2: Yu-Gi-Oh! Master Duel: Great tcg with perhaps the best online tcg client yet. Love card games, but rarely have the time to play them in real life and Master Duel is therefore the ultimate solution.

3: Rogue Legacy 2: Great “one more run” game. Didn’t really click with the gameplay at first, but when I did I was addicted.

And that’s basically all the games I’ve played that were released this year lol. Carved a chunk out of my backlog and spend a lot of time reading.

An amazing survival game with friends. Even for people who aren’t that much into survival games. A friend of mine recently bought an Xbox. And we’ll be playing more of this for sure.

The F1 games are just great. I suck at them though. But they’re fun ways to forget about work when I get home. One day I’ll become decent in one of 'm… right!?

A cute 2D zoo builder with a dark twist. Did lack some depth though.

My game of Q1 2022. Played this a lot. Sadly haven’t had the time to play these past few months. Will join a LAN-party where we’ll play this… so I think I need to get some practice in.

The amount of content in this game is just insane. Every time I launch it I see new stuff.

Even though the plaza’s and promenades DLC wasn’t amazing, it is a great direction to the game for me. I’ve always thought it was a bummer how it’s hard to build less car dependent cities in Cities Skylines. If they polish this DLC a little more, this could be a next step in city building games.

Didn’t play many new games this year. (Did play some which weren’t great, so not putting those in my list

OGG1. Elder Scrolls Online, love this game but there are some serious problems with it currently that I hope to see fixed in the future.

Does Persona 5 Royale count ? Cause that would be my #1 lol.

Just started the last mission, Rubble and Ruin, and let me just say, this level is breathtaking. Just the ambiance created by the smoke, darkness, bombed out buildings, and atmospheric music is enough to make you realize you’re playing something special.

But then when you reach the trees on fire, with glowing embers blowing in the wind… Hands down the most beautiful game I’ve played this year.

After spending 72 hours completing the campaign in single player, and another dozen messing around in co-op, I don’t hesitate even a little bit in declaring this my Game of the Year.

Does Persona 5 Royale count ? Cause that would be my #1 lol.

5.Nobody Saves the World

I’ll see if I can knock out a few more games from 2022 first before I put my list in.

I think there should be a rule change to ports since these games are new to the Xbox ecosystem. Every year I can’t include so many games in my Xboxera GOTY list because of this rule. In fact my real GOTY are never mentioned because of this rule and i end up choosing games I liked but didn’t love for my top 5-10. For example. 2020 I’d pick Yakuza 0, 2021 Dragon Quest Builders 2 and 2022 Persona 5 Royal.

This year the only 2022 game i played and beat and loved was Elden Ring so I can’t really contribute since so many games that i played and loved this year were ports that came to Xbox for the first time in 2022, Danganronpa, nonary games, persona 5 and so on.

***13 Sentinels Aegis Rim would be high up if ports were ok.

Noticed earlier that SotS again was my most played game of the year with 200+ hours.

Guess 2022 was not a great gaming year for me as I couldn’t even think of 10 games I liked. The other 22 releases I played have too many issues to be in a GOTY list.

I think there should be a rule change to ports since these games are new to the Xbox ecosystem.

Agreed. Especially since Deathloop is included in the Staff Top 10 list, and several staff also included older games in their individual picks. Even 1997’s Blade Runner made one list.

I’m assuming those lists aren’t included in this community award, so I guess in that sense it doesn’t matter, but I just don’t understand this discrepancy of logic.