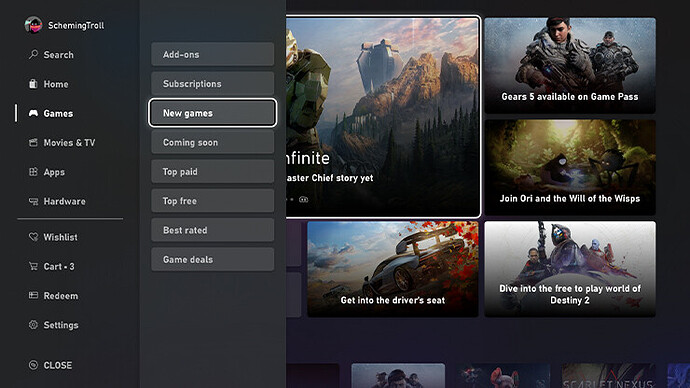 A few things to note

•Grade A Sucker for sales

I’m probably alone on this one but hear me out. You can’t actually see every game in the store. You can only search the last 930 newest releases and thats constantly changing, so if you aren’t checking the store alot you may miss a hidden gem or a game that’s completely your jam because it’s too far down the list or completely pushed off. Even if you search by genre, that only brings up a handful of AAA releases that have barely changed, same with the ‘id@Xbox spotlight’ for me its been the same games for months now. I find this to be completely unacceptable.

I want it to be like the Backwards Compatibility section because I’m pretty positive it shows all of those. The “Games We Picked For You” is a great tool but sadly only shows 500 games. I do use the wishlist feature to keep tabs on games I want but that’s already a complete mess because it’s 100+ and always growing. It’s disappointing I have to use TrueAchievements to see every game that’s available to me on this platform.

My Wishlist for the store

Thank you for dealing with my rant.

I want it to be like the Backwards Compatibility section because I’m pretty positive it shows all of those.

Not even that section it’s complete, I checked last year and it’s definitely not. Anyway, I agree discoverability is a big issue within the store, the new refreshed ui introduced with Series consoles has improved its fluidity and some options (like the one through which you choose the game different versions), but the search function is still severely limited and if you don’t search specifically for a title, you are very likely to miss it.

I don’t have many complaints, even though it’s far from perfect. But there really should be a normal way to find demos. I can’t believe I have to search for the word demos and then choose free demos.

For the most part I think the store is pretty good, if the main problem is that is not showing all games/discoverability, both released and up coming games. I think a the solution could be to give us a link to the store on the browser which list 2619 games available to Xbox although that only goes to a max of 200 games per page(and have it go back to the console store when we need to pay). Or make pages similar to the browser store so that we can browse 930 games at a time.

I think the store on console is fine, but the app and backend on PC still needs a lot of work. Lots of bandaids, but it’s still not good enough sadly.

I only use the wishlist from the store. I check every week if there is a sale for one of the games on the list. No other interaction necessary anymore.

I don’t have any problems with the store. I don’t like the PC store though.

The store is generally fine, but there are some inconsistencies that drive me up the wall, as documented in this old post.

Edit: I’m gonna change “generally fine” to “good” just because I suddenly remembered by experience with the PlayStation store last gen. Fucking thing totally refused to accept any new payment method because I had an expired credit card in there, and it refused to remove the expired credit card because then there wouldn’t be any payment method. The only way I managed to buy things was by buying PSN gift cards and redeeming them, costing me more money than what the game was worth.

Addressing your points one by one:

Also holy cow you have a lot of games.

i legit just order through the desktop website. the app, especially, needs improvement.

I think the store works well enough for my needs. I check sales thats about it lol.

I think the store on console is fine, but the app and backend on PC still needs a lot of work. Lots of bandaids, but it’s still not good enough sadly.

Have you tried the windows 11 store yet? I have been testing it in a dev environment at work so it’s not tied to my personal windows account which somewhat is limiting but it seems a lot better than windows 10. The gaming section looks a lot better/cleaner it denotes gamepass and the search services work as you would expect. I like that they have checkmark and blurb stating if the device should work or not for your PC. Most enthusiasts probably don’t need it but a lot more casual people i can see a good benefit there.

Since its a test dev environment for work I have not installed any of the games so can’t speak to if the install process is improved as i do know some people have had issues with that on windows 10 from the store. i personally haven’t had any install issues from the store in windows but i do know they exist.

The store could definitely use some improvements, especially on the PC.

The Xbox store is great on Console even though I barely use it now because of Game Pass.

If you think the Xbox store is bad don’t get a switch.

I think it’s improving. Could be more refined categories but still

I think the store works well enough for my needs. I check sales thats about it lol.

Yeah same. And games I want I know what they are.

I personally mainly just use the web store to buy things I know I want then push it to the console. I rarely actually go into the store on the console itself

I find the functionality of the store itself on console to be pretty good. It’s snappy and easy to use on Series X. I add games to my wishlist and check for discounts periodically.

What really sucks is the relatively limited roster of games on sale. Compared to competitors’ storefronts - I’m thinking Steam and Switch eShop here - there seems to be a much narrower variety of titles on sale. Right now there are 1089 games on sale on Switch, 1767 on Steam, and 208 on Xbox. It ain’t great.

The sales seem to be heavily curated too. Unless I’m mistaken, there’s a single time of the week that a new batch gets discounted (Tuesdays at 1am UK time), usually with some pointless theme (currently ‘DC FanDome Sale’ - who cares? Just discount a bunch of random games), whereas on Steam, Switch, GOG etc games go on sale throughout the week. And this is conjecture, but on Switch, I suspect publishers have much more control over when they discount their games and by how much, given some of the wild discounts (100% off some shovelware title on a random Sunday) which I’ve never seen happen on Xbox.

OK, mostly I’m just salty that some cool little indie games I’ve had on my wishlist for over a year have yet to go on sale, despite getting discounts just about everywhere else. Bah.

Which is extremely odd, since we know from the infamous Platform X (Playstation) rants, that developers have substantially more direct control over prices and sales on Xbox than PlayStation. Wonder why the developer didn’t run a promotion there.

Theres an expansion to Outer Wilds??? What on earth for. Game was perfect as it was.