Where and when did you buy your Xbox One from?

I was just curious when and where everyone got their console.

I got mine in 2016 and it was the Forza Edition of the Xbox One. 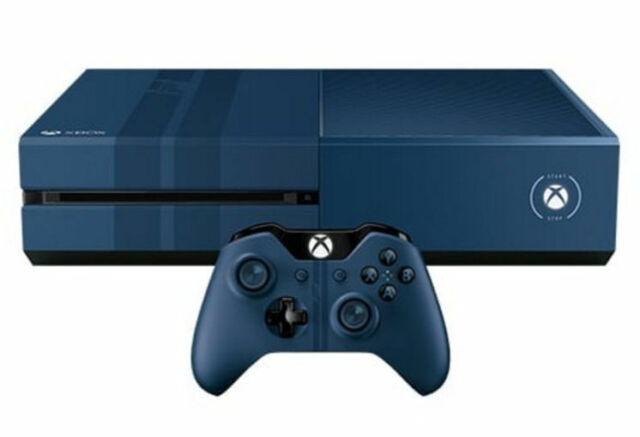 I live in Fiji so it was nearly impossible to get it. Hence my brother-in-law helped fetch one fro me from Australia. Luckily our power plugs and everything are the same so it works like a charm.

My console is still going strong with occasional power downs for no reason recently. I have gone ahead and cleaned it so that has helped.

Luckily it was the 1TB model and I haven’t had a need for more space because I cycle through my installs.

My favourite thing about my console, besides te racing stripes, are the custom engine sounds for when the console starts or shuts down.

Looking forward to hearing from you guys!

p.s. the controller that came with it had rubber grips which are amazing but have since worn off a bit and my RB button gets stuck so I have gotten this as my new primary controller. 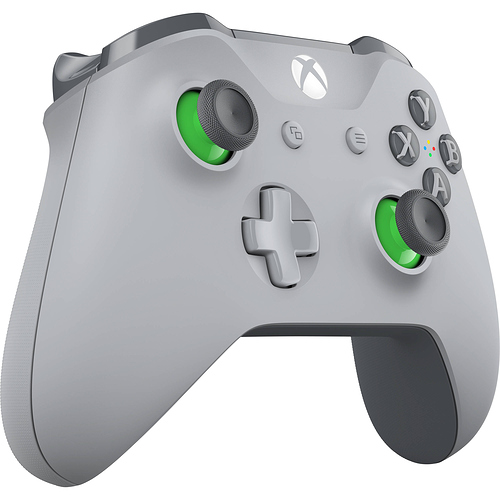 I got mine in 2014, when the Kinect-less Sunset Overdrive bundle came out at 399 Euros. Didn’t have a lot of money back then so I used the chain’s (Unieuro) offer to pay 39.90 for 10 months straight. I did already have a bit of a back catalog as earlier that year I managed to snag Ryse, Forza 5 and Dead Rising 3 for 10 Euros each at the Milan Games Week, plus some free codes, GWG games, upgrade deals like the 5 Euro Minecraft one, and so on.

I got mine in 2014, when the Kinect-less Sunset Overdrive bundle came out at 399 Euros. Didn’t have a lot of money back then so I used the chain’s (Unieuro) offer to pay 39.90 for 10 months straight. I did already have a bit of a back catalog as earlier that year I managed to snag Ryse, Forza 5 and Dead Rising 3 for 10 Euros each at the Milan Games Week, plus some free codes, GWG games, upgrade deals like the 5 Euro Minecraft one, and so on.

Series X will also release immediately in the Netherlands so I already pre-ordered mine here.

I bought the xbox one without kinect in 2014 in Mexico, at the start i wanted the white one with sunset overdrive but i couldn’t find it, so i bought the one with ac black flag + unity.

I preordered the console in Brazil, but in the end turned out to be a exercise of patience.

They charged the console right away in the preorder, around 6 months before launch. With the promise to deliver on launch day.

In the end, the console launched, and my unit wasn’t shipped. Even the local physical store of the store I purchased had one and I couldn’t pick it up despite having already paid for it. They ended up sending to me 2 weeks after launch, and only arrive 3 weeks later.

I stood in line at Best Buy and got mine at launch.

Summer of 2014. Bought it in-store at Best Buy with Battlefield 4 and Metal Gear Solid: Ground Zeroes as my first two games. My system did not come with a kinnect. While I have an Xbox One X now, I still have my original on display. Lots of good times.

I got it from a store called Liverpool here in Mexico

Got the OG VHS One at the start of 2015 when the price was 400€ including some Assassins Creed games from a online notebook shop together with a Surface Pro 3. The build quality between those two hardware products from Microsoft could not have been more different.

I picked up the Titanfall bundle when they added a game also @TK-421 – I got Thief with it, instantly traded it and picked up something else I’ve totally forgotten now.

That was not long after launch.

I actually had a few. First one was with the Assassin’s Creed Unity and black flag bundle (with Kinect). Bought from Microsoft store and got xbox rewards points I think (before that was merged).

Then later Gamestop had a deal for trading in a 360, so I got another console, which I then sold off.

Won one of the gold PS4s bundles from Taco Bell, but sold it as I didn’t want it.

Ended up buying a Ford GT Forza bundle, though I actually never used it

Got the Battlefield One S because I wanted something differently colored. Think that was from Best Buy I think. Sold my original xbox one to a coworker for his son when I got this.

Bought the One X about a year and a couple months after it released from antonline through eBay for about 150 off, was very upset when I got it as both the shipping box and the box the console was in were damaged due to poor packaging and the box just bouncing around inside the shipping box. Thankfully no issues with the console though. I had to contact Microsoft support because the warranty was off by about 8 months due to the seller not updating when it was sold. Support were pretty cool abut fixing that for me. Sold my One S for about what I paid for the X.

Did get my hands on one of the Cyberpunk One X consoles when they came out, sold it off pretty much right away for a small profit.

Got the Series X last fall, and now have that and my One X which we moved to the exercise area.

Never quite understand why people are selling consoles 2-3 months after they buying them, but I’ve benefitted twice.

Black Friday 2014. Went to GameStop in the middle of the day and bought a used one. My nephew has it now so it still lives.

Black Friday 2019, bought a One S All Digital Edition for 115 euros to have Game Pass. It was my first Xbox and I have been on the ecossystem ever since

Amazon Prime Day 2016 - was chuffed at the time as I thought (and still think) it was a pretty good deal. Came with Kinect which I didn’t use for games but still use weekly to let my kids talk to my parents on skype (easier than crowding round a little screen).

Have a Series S now but still have the XB1 hooked up for the aforementioned Skyping and it now doubles up as the kids console so I don’t have to share my SSD with them! Its now filled with Lego games I got free with GWG. 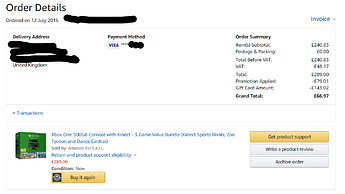 Amazon preorder for launch day in 2013. They didnt deliver it until 2 days later because Amazon hasn’t been able to deliver packages on time in nearly a decade, even though I live in normal area suburb of Cleveland Ohio.

For the OneX edition I pre-ordered from Microsoft to get it for launch day in 2017.