What is your favourite Bethesda IP? 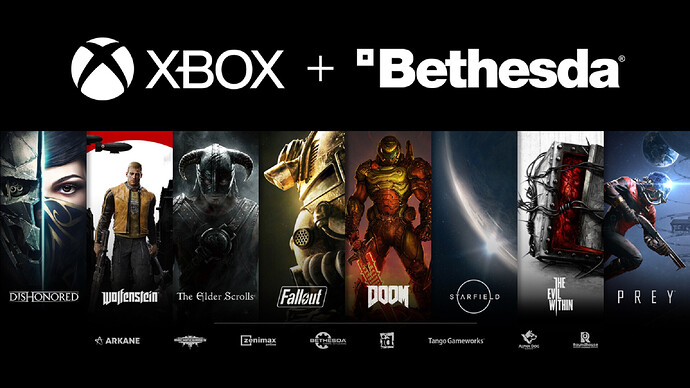 image1920×1080 342 KB
Very curious. I’ve been diving deep into the Bethesda back catalog these past few years, especially once I was able to become used to and enjoy first person games. I thoroughly enjoy the majority of their output, and while Fallout, Wolfenstein, Prey and Dishonored are great contenders, it still has to be Elder Scrolls for me. Skyrim quite literally changed my life, and I loved my time with the others as well (particularly Oblivion). In all fairness though, I still need to play Evil Within and Rage.
Favourite Bethesda IP

I love The Evil Within a ton, hoping for a 3rd game in the future!

Loved Doom 2016 yet to play Eternal

I love The Evil Within a ton, hoping for a 3rd game in the future!

Loved Doom 2016 yet to play Eternal

Eternal is on gamepass

Eternal is on gamepass

Series X patch is coming too so I might aswell wait

Series X patch is coming too so I might aswell wait

I really need to give most Bethesda/Zenimax games another run through or a second chance. Usually I end up getting busy with something else and dumping them.

So far I’ve 100% completed Skyrim, got most of the base game achievements in Fallout 4 (need to do the DLCs still), got most of DOOM 2016 finished up for achievements, need to clean up DOOM Eternal some more, and have barely played much of New Vegas. I was pretty far in Fallout 3, but then lost 3 hours of save data and never went back…

In the case of Dishonored, I’m not a huge stealth person, but those games give me such Bioshock vibes that I’m going to keep going back. I know you can decide to not play stealthy, but the achievements really make you play both ways. I’ve only played the first game, both on 360 and One.

The Evil Within I got a little bit further in a few weeks ago, but dropped it again for other games. Haven’t tried the second.

I bought Prey and am excited to finally try it out, but just haven’t gotten around to it yet. The original game I got a few hours into, enjoyed, but then set down.

I own Oblivion, but still have yet to play it. ESO I tried on a free weekend and just didn’t get into. I love the ideas of MMOs, but they just never work out for me.

I’m like halfway through Wolfenstein: The New Order and (surprise) dropped it because I got busy. Will be going back to it (and I will try 100% it).

I remember loving the demo for Rage, but haven’t played it since then. lol

Elder scrolls. Been playing since Arena. Yes, I am that old. As far as a game world goes, that is one that I just enjoy spending time in.

“Patrolling the Mojave almost makes you wish for a nuclear winter”

I have been in love with the Fallout franchise since I was a child, I remember 15 year old me actually crying tears of happiness that we we were finally getting a sequel for a franchise that I thought was gone forever. Fallout isn’t my favourite Bethesda franchise, it’s my favourite in gaming full stop.

I guess Wolfenstein, but I’m not in love with any of them really. I’d probably be into Dishonored if I carved out time for it. Deathloop probably will be the answer, once I get to try it on Game Pass in May 2022.

I pick Dishonored love the stealth and traversal gameplay of it.

For me TES is the best IP. Played since Morrowind and love the lore and music. When I’ve got the Sheogorath Quest in Skyrim and he began to talk about Martin Septim, fox, blood and head I’ve got chills from it. This confirmed that your hero from Oblivion is the new God of madness.

I pretty much love them all, but Elder Scrolls is def on top

Seconded. Could not be doing with that.

I am looking forward to Deathloop.