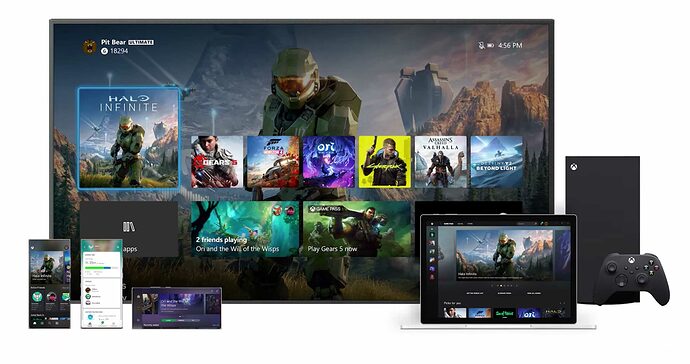 I’ve created this thread to bring light in a positive way to small features users feel Xbox needs to improve.

Personally, there are some things I wish were improved:

What are everyone’s suggestions?

Edit: Oh and i forgot the biggest and most embarrasing thing: FIX THE F***** STORE on PC! Seriously, how can Microsoft fail at delivering paid software to their users?! And this goes on for years?

I know it is partially getting fixed in April but the entire network throttling thing when games are suspended or in quick resume REALLY needs to be thrown out the window.

I do not want my downloads to slow down to a trickle when I’m playing games. I also want to see what game are suspended or in quick resume mode.

Sometime I’ll play a game waiting for a download to finish, and now I can’t do that. I’d like the option to turn that off completely

Just fix the damn sharing system on the console so its non intrusive on the experience. PS5 has this nailed down and there is no reason that xbox cant copy this.

I agree with the events, years ago (many, many years ago) there were xbox events in my city, when there was still blockbuster, with the technology we have now I would like there to be online tournaments and even offer prizes, for example, last year I participated in a CoD Mobile tournament, it was very easy to participate and a lot of fun, just for participating they would give you skins and game things, but if your team qualified for the next round they would give you cod points and the more your team advanced , you got better prizes.

MS could give memberships, store credit, game codes, limited edition consoles and controls, things like that.

They could even go beyond first party games, partner with Activision or EA to do CoD, Fifa, NBA tournaments, etc. Imagine: “Official FIFA tournament exclusively for Xbox.” I think a lot of people who like competition would switch to Xbox just to participate in official tournaments.

I agree, some more control over Quick Resume would be nice. It’s always nice when it works, but I just can’t rely on it working if I want to avoid losing progress.

More achievement stuff would be nice, of course.

Can you automatically upload your captures to your OneDrive? I’d really like to have that feature. Please clue me in if I overlooked it

…p something that I will try to solve later this month once I complete Outriders but in general, there shouldn’t be any hoops. The console should have an internal month/day/year that can’t be accessed which would be for Game Pass subscriptions so it knows when your expiration is.

Folders for the dashboard or allow me to move/adjust the top line. I don’t like that I have 6 games on the list with settings and the store at the end only to see the 6th game get removed every time. It’s annoying. Please give me folders so I dump the stuff I don’t care about in it. Also, I do wish the main tiles for the games didn’t include “settings” when clicking on it. It should be separate and that line should just be your games and that’s it. Settings should not appear on that list every time you access it.

The PS5 shows having the dash in HDR is a bad idea! Unless you allow switching to true SDR for SDR content but that means you lose the benefit of the dash being in HDR anyway.

The PS5 shows having the dash in HDR is a bad idea! Unless you allow switching to true SDR for SDR content but that means you lose the benefit of the dash being in HDR anyway.

The crisp “pop” look of the PS5 dashboard is actually one of the few positives I have for it. I don’t like the layout as they should have kept it the same as PS4/PS4 Pro and just made it 4K/HDR. I only use the LG CX for gaming and thus far, I haven’t played a single game without HDR so the only switching to SDR that I encounter is when I go to the dashboard on Series X.

I’m sure they could always add the option to switch HDR on/off like they’re doing with Auto HDR.

I’d like to see a controller where the triggers and bumpers are a little bit soft touch. My fingers can really start to hurt if I’ve been playing a long time. The issue is finding a way to do it that doesn’t make the controller feel imprecise, and finding a way to have the materials not separate… But something so it wasn’t hard plastic with a ridge that kind of cuts into the side of my finger would be nice.

I’d also love dual screen support so I can hook up 2 displays natively. Would be awesome for racing.

Lots of good ideas mentioned so far. 4K dashboard and improvements to the app are at the top of my list. Also a return of system-level look inversion setting.

Including a gyro sensor in the next controller iteration couldn’t hurt.

To be able to see (picture-in-picture) what my friend’s screen is doing when I click on his name. Would be awesome for him to say “check out this area I just reached on XYZ game”, and you can just have a quick stream from them in the corner of your screen

Automatic updating needs some work. It never quite seems to work correctly and even the manual update queue takes forever to load and only works sporadically.

I hate the sharing System, its so pointlessly byzantine compared to PS4 / PS5.

I don’t want to wait for things to “maybe” get updated to one site or other in the next “n” hours, I don’t want to have to download everything I have taken one at a time while reviewing. Let me move them on mass to a USB stick, or if I have setup a USB stick have them “eventually” auto upload from there as well.

As someone who uses screenshots a lot its baffling how daft the system is compared to PS.

Agree with other suggestions about quick resume, and the apps. Or being able to set which games do not quick resume ever would be good. Division 2 suffers from Slow resume since QR always takes you back to where you were, which by later is an error screen you have timed out, so then you need to load up again as usual.

Achievements. I seriously can’t believe we don’t have a way to show how many completions we have to friends. PlayStation Platinums are awesome and being able to look at someone’s PSN profile and see how many Platinums they have is awesome. These days gamerscore has been so devalued that it doesn’t even mean anything. I’m debating if MS should allow every game to have a “Platinum” or curate who can and can’t have one. Theres so many easy completion’s that could easily devalue that system too.

Yes, auto uploading all screenshots to OneDrive would be very welcome.

hate the sharing System, its so pointlessly byzantine compared to PS4 / PS5.

I dont care that it sends it to mobile but the upload process sucks and the in console sharing stinks.