What Banjo & Kazooie game would you like to see on Xbox Series X? 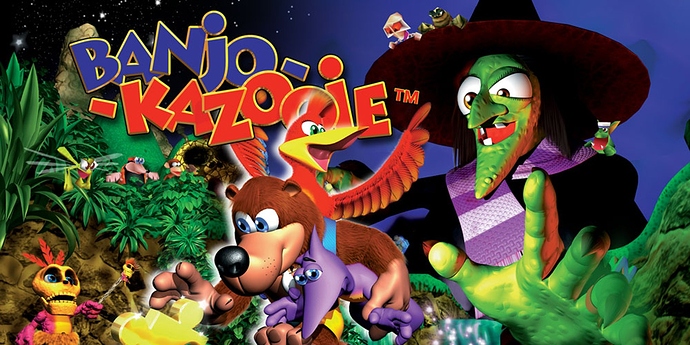 I really really hope a Banjo & Kazooie game is coming to XSX sooner or later. As well as Rare partnered with Dlala studios to give Battleatoads a new lease of life, they could join forces with Playtonic or another small studio for the purpose of creating a new Banjo game. Were I in charge of it, I would have looked like crazy for a studio for the game after seeing the reception of the addition of Banjo and Kazooie in Smash Bros Ultimate. This chance can´t be missed!

Well, back on topic, we would have the following options:

What do you guys think? Could also Game Pass represent a great chance for new gamers to get to know this series with this new game?

This is really difficult. I would be very happy about a new banjo game, but I don’t think Microsoft or even Rare are interested in it. A remake of the first two parts, or even part one, will probably not interest anybody anymore. Again, I would be very happy if they would do something with Banjo again, but I don’t believe in it anymore. Nuts and Bolts broke the franchise’ neck. It wasn’t a bad game, but not a banjo game at all. That’s why it would be another slap in the face for the fans if they would bring out a game that is not a jump n run. I think we should keep Banjo and Kazooie in good memory. We can play parts one and two trough BC and enjoy it.

First Banjo remade from the ground with some nuances etc It’s SUCH an easy win for MS. Baffles me they haven’t done this yet.

Sometimes I think there are parts of the Xbox team that are so deaf to their audience. But then they purchased Obsidian etc and began to see where the real demand/enthusiasm is for games!

I’m not sure I could trust many companies to be able to make a Banjo-Threeie. Like Microsoft would actually have to put effort into this game in order for it to live up to the brand in my opinion.

I’m kind of leaning toward a Banjo-Kazooie/Tooie HD remake collection in the vein of Crash/Spryo collection. Maybe throw Nuts and Bolts on there just for the hell of it. Like I really want new Banjo content badly. Really wish Phil Spencer would at least address this IP and let us know if we can ever expect any new games or not.

I have no desire for a remake. Game remakes in general are not really my thing. A new platforner would be great, given the right team, although I would prefer to see a modern day big budget take on Nuts & Bolts. I adore that game.

Please don’t rake me over the coals for this. Lol.

With Microsoft’s cross-play and multiple devices approach I believe it’s time for a low barrier racing game in a cartoony style. And they could use the Banjo-Kazooie name to market it. See if it can stand up against Mario Kart, Team Sonic Racing and Crash Team Racing.

Could introduce guest characters from other non-Rare IP as DLC or free content.

With guest characters like Master Chief, Ori or Razputin from Psychonauts. …Please don’t rake me over the coals for this. Lol. I’d like to see a Rare karting game by Sumo Digital called Banjo & Friends Kart. Though it could be Conker & Friends Kart too. With Microsoft’s cross-play and multiple devices approach I believe it’s time for a low barrier racing game in a cartoony style. And they could use the Banjo-Kazooie name to market it. See if it can stand up against Mario Kart, Team Sonic Racing and Crash Team Racing. Could introduce guest characters from other non-Rare IP as DLC or free content. Characters

With guest characters like Master Chief, Ori or Razputin from Psychonauts. I’d dig that.

there’s nothing to object, this would be AMAZING. You really think Rare under Nintendo today wouldn’t have made this thing already and selling tens of millions of copies? MS is just sleeping on a goldmine of Rare IP, it’s ridiculous. Battletoads was probably a test in the waters, but Banjo Kart and a new Viva Pinata would be most welcome as mainstay Party Game franchises.

Banjo-Redooie by Playtonic (as they exprimed interest in working on Banjo) and Rare.

Full remake (new graphics and musics remade by Grant Kirkhope) of Banjo-Kazooie and Banjo-Tooie with a new world for each game (iirc, Rare had several worlds cut during development, they could use these ideas). This would have 19 worlds which is huge.

And make Banjo and Kazooie meet Yooka and Laylee somewhere in the game or at the ending. And make Kazooie and Laylee fight

I seriously don’t know what MS is waiting for since Playtonic said they would love to work again on Banjo. This is baffling.

Gamepass reduces the risks and offers a wider audience for the game, there is a lot of nostalgia (Banjo in Smash proved it) and they still could release the game on Switch later if they want more sales.

Maybe throw Nuts and Bolts on there just for the hell of it.

“Just for the hell of it”

I think it’s unlikely to happen but Nuts N Bolts getting a sequel would be just about the only Banjo game I’d be interested in.

Add in a bigger set of parts to create with and make it possible to make larger constructions too and it would be practically essential, imo.

I know most people’s affection for BK comes from the old platform games but N&B was truly one of the most unique, interesting and fun games of it’s time and a real shame it doesn’t get the respect it deserves.

I would like a from the ground up remake of the first game to start with.

Launch a F2P kart racer with cosmetic karts, skins, antennas, and whatnot like in Rocket League. Use the money made on that for a proper Banjo-Threeie.

But yeah, if we ever get that it will be a looooooooong wait.

I think best route to go will be a banjo 1&2 remake, but modernize the game. I think there has been a renaissance for platformers. Then Microsoft can see if there’s still a market for series based on sales, and then can plan accordingly from there.

I’d be happy with them doing a 1+2 remake similar to how Activision did with Crash and Spyro. If that does well with sales and Game Pass downloads, then move on and make a true sequel.

Part of me finds it hard to believe MS doesn’t have plans for the franchise considering Banjo and Kazooie both appearing in Smash, but then again they didn’t have to put any actual effort into that, and it was essentially free marketing.

A remake of the first two games, ala Spyro or Crash, is the best route.

These types of remakes are making bank right now, and a Banjo 1+2 remake with next-gen graphics would be a huge hit. It’d also allow them to bring Banjo back into the public eye, and possible set up a Banjo Threeie follow up.

What about Danish studio Gears for Breakfast developing a new Banjo? They are not very experienced having only released A Hat in Time but with the right funding and support

I’d like to see Playtonic or a new studio work on the Banjo-Kazooie series. Ideally, they would do what Activision did with Vicarious Visions for the Crash Bandicoot series and start with remasters of the old games before doing an original title.

Xbox needs more all ages games, and it’s really a failure in their portfolio that they don’t have them. In my mind, a great way to bring new fans into the Xbox eco-system is by attracting young fans. Also, young gamers is one of the biggest justifications/selling points for a console instead of a PC rig.

To me, Banjo-Kazooie is the “crown jewel” in that strategy. Re-establish B-K, and then they can bring back Banjo Pilot, they can spin off Mumbo-Jumbo into his own series, or even use it to launch new SabreMan or Kameo games.

Don’t have as much love as most other Xbox or Nintendo fans do for Banjo . But in my opinion , whenever he comes back, and I do believe he will , It should absolutely be a new game . There is no need of “testing the waters” for this , and we’ve seen over the year with Crash, spyro and even some else specific revivals of games in other genres that there is high demand for returning characters and franchises .

If we see remakes it should at best only be to get a developer up to speed on how to make this type of game in the modern era . But i do believe they should just get a developer to make a brand new title that’s a traditional 3D platformer and a “reboot” of the franchise.