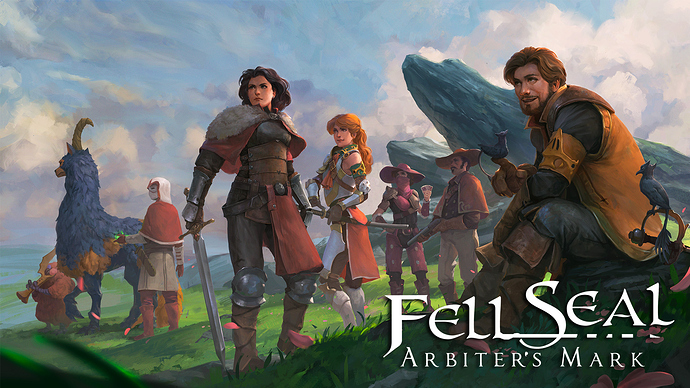 So here I am with another thread for another game that’s not well-known. Went with my clickbait-like title that worked well for my Nexomon thread :p. So here we go!

Fell Seal: Arbiter’s Mark is an amazing SRPG! If you like Final Fantasy Tactics or SRPGs like it, you’re almost guaranteed to like this game. It’s the exact same format pretty much. Turn-based Strategy RPG where your characters have certain amounts of squares they’re able to move based on their class and equipment. You also have Height that can be increased by equipment and classes as well to get to higher up places. Some maps have Chests that are only accessible if you have the right Movement/Height to get to them. There’s shoes that teleport you to areas, so you can get over water, lava, get passed trees, etc. Also, Side Attacks and Back Attacks do do more damage. There’s also Elemental Resistances to look out for as well.

There’s a ton of classes to level up and unlock for each character, all with their own special skills and passive traits. (~19 I think, plus the 4 Special Jobs, and if you get the DLC it adds 3 more Jobs and Monster Classes/Jobs) 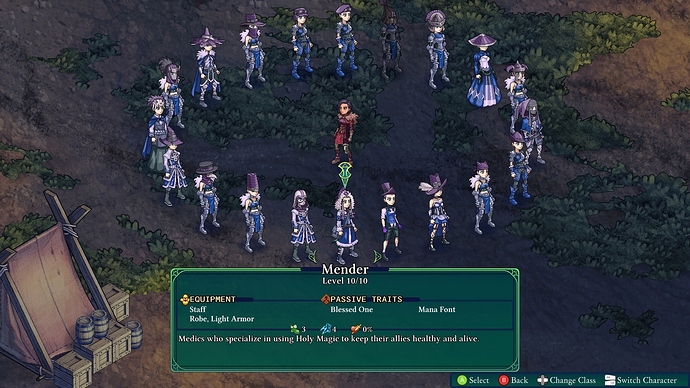 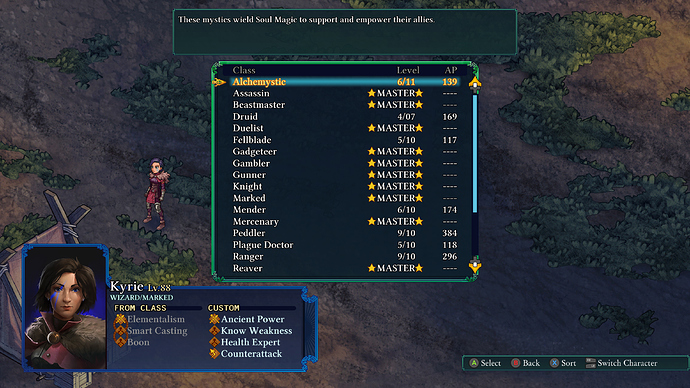 Each Job/Class has their own equipment and weapons they are allowed to use, as is typical with most RPGs. The cool thing is you can set any Job you’ve unlocked as a “Custom Class” so that you’re able to use all of the abilities you’ve unlocked for them, while leveling up another job that has its own Skills plus two Passives. 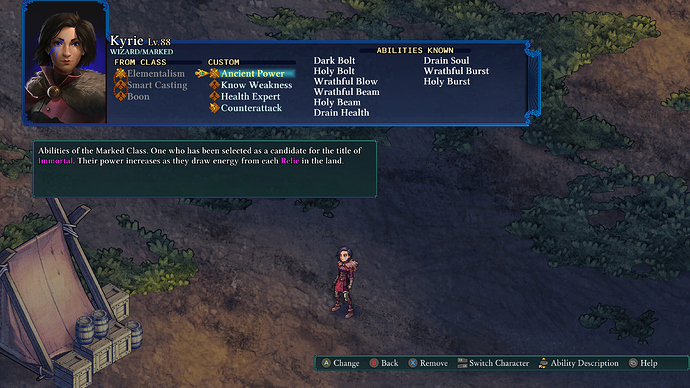 FellSealCustomClass3840×2160 2.31 MB
So once you Master a class, it becomes extremely useful. You also get two Passive Abilities you can equip the character with from any Job Skill you’ve unlocked, as well as a Counter trait. (All these are shown under “CUSTOM” where I have “Know Weakness”[Increases Crit chance by 25%] and “Health Expert” [Increases Max HP by 25%] and the obvious “Counterattack”). Counters can be anywhere from a simple Counter attack/magic attack, to getting a buff, to healing yourself, to stealing an item, to teleporting your enemy away from you. There are a TON of Counters to pick from, it’s awesome. This helps immensely when you’re starting a new Job from scratch so you still have some skills/magic to fall back on. There are also 4 Main Characters that have Special Jobs that only they get. The “Marked” class that I show is the main character’s special job. Demon Knight, Spymaster, and Anatomist are the other Special Jobs you get.

There is a World Map where you travel to your different quests/battles. (This is not complete) 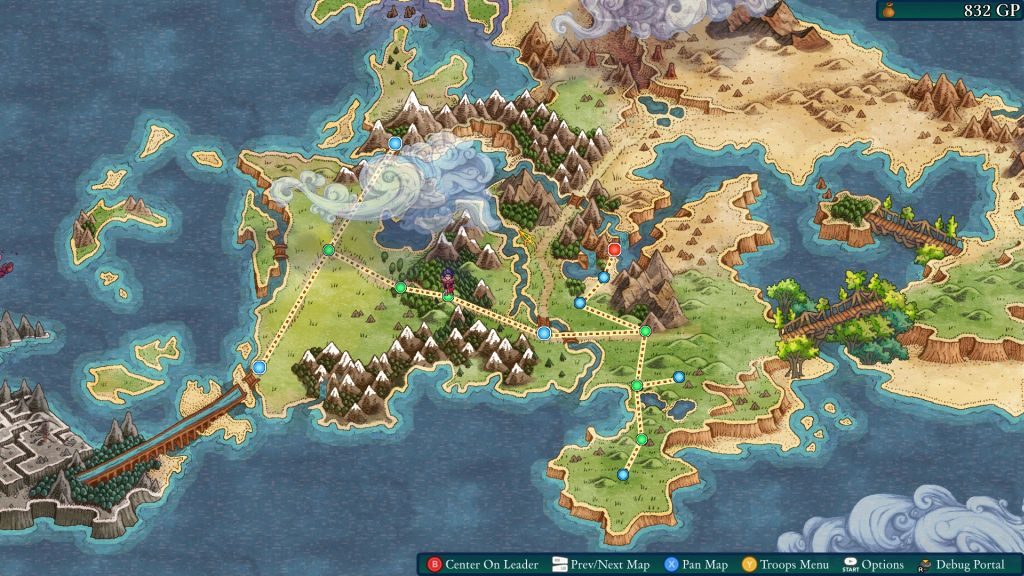 1024×576 165 KB
You can replay every place that lets you battle, and there are towns to buy new equipment from. This is also where you get access to the Guild. The Guild is where you can hire new recruits, change a character’s appearance, take Missions (This is part of DLC and I’ll explain later), and stuff like that. There’s a Troops Menu that is accessible from the World Map at any time where you Level Up, Assign Skills, Change Jobs, Craft Items, Check Inventory, and Change Difficulty. 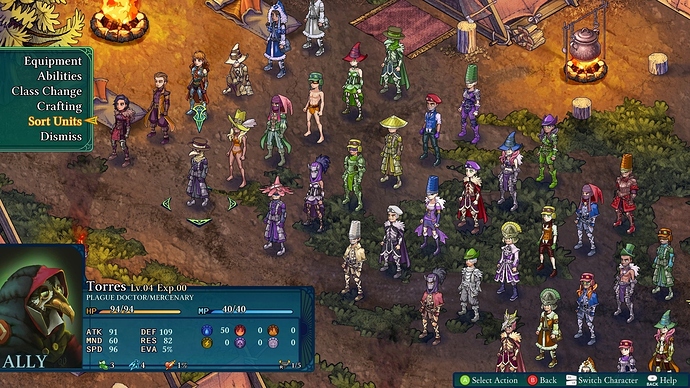 My favorite part about this game is the Difficulty Options it lets you select. You can make this game as easy, or as hard, as you want. It is extremely friendly and doesn’t mess with achievements if you wanna switch mid-game. Also you can change the speed of battle to make things faster. It’s a must imo, lol. It moves far too slow at normal speed. 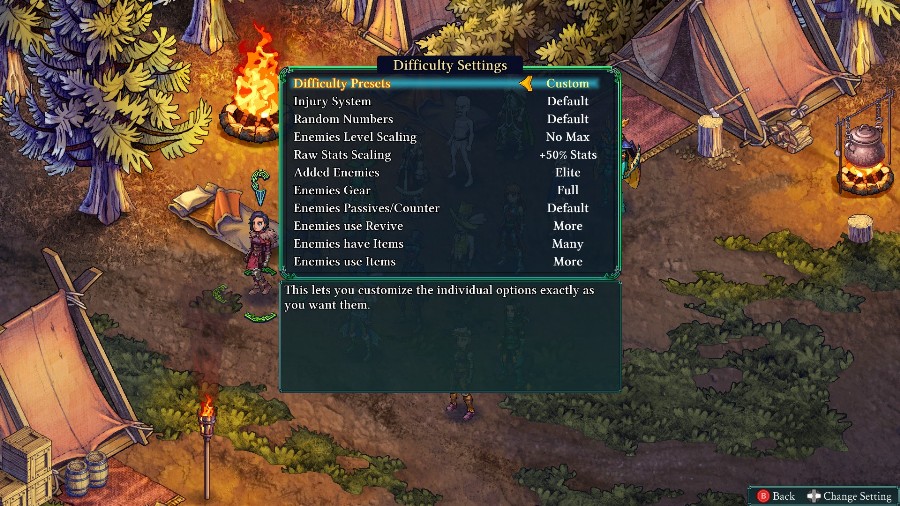 Difficulty Presets - These have the standard Easy, Medium, Hard, type settings that they think are right for the game. You can choose Custom and set everything yourself!

Injury System - There are penalties when a character falls/dies in combat. You can turn this on or off.

Random Numbers - The game will use a randomizing system either in the Monster’s Favor, nobodies favor, or the Player’s favor. (Think crit chance, hit chance, etc.)

Enemies Level Scaling - Each map has a minimum and maximum level for enemies but they will always scale with what difficulty option you select. If you select No Max, enemies have no maximum level (good for when you level up really high)

Raw Stats Scaling - Enemies have X% added or subtracted to their stats.

Added Enemies - You can choose to have less, the normal amount, or more enemies added to each battle.

Enemies Gear - Enemies can have more or less gear/equipment depending on the difficulty you select.

Enemies Passives/Counter - Enemies have a chance of spawning without passives or counters if you want them to.

Enemies use Drowning - Enemies can or cannot use Drowning. So if the enemy uses a skill that pushes you into water and your character can’t swim, they “Drown” and die.

Enemies use Revive - Enemies can or cannot use Revive

Enemies have Items - Enemies start with items or not. I think they will always still have items to steal regardless of difficulty.

Enemies use Items - This is the chance that the enemies actually use the items, if they have them. 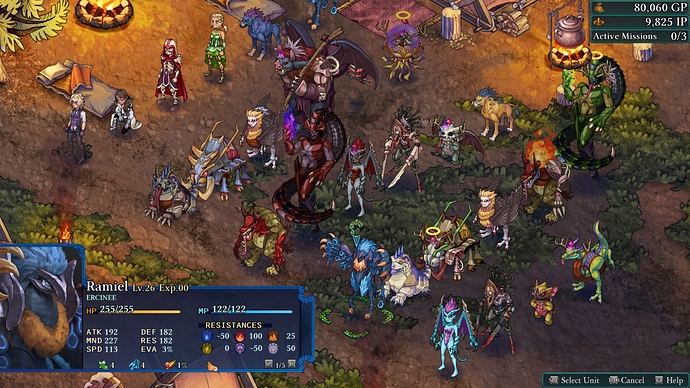 2560×1440 691 KB
There is a separate DLC (that I think is FULLY worth it if you enjoy the game) to buy that allows you to capture and tame all the monsters you fight, as well as add more features to the Guild. You can send Recruits/Monsters out on “Missions” to gather crafting materials, gain Experience/AP, etc. There is also a section where you can make Areas on the map have certain features like Higher Crit Chance, Higher Tame Chance, More EXP/AP, etc. Check out the Store Page for more info on it! 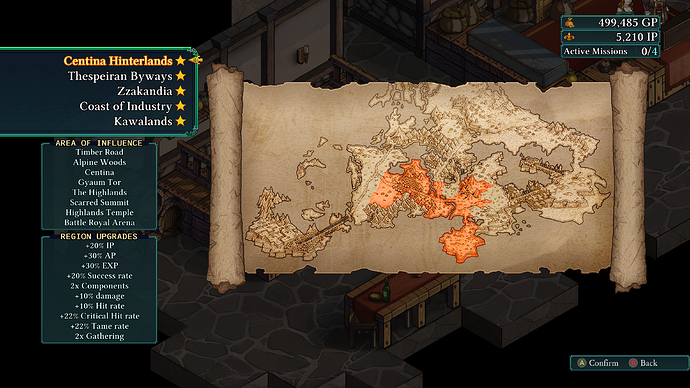 I’m sure there’s more that I’m missing, but I want ppl to not just see this is a massive thread and “nope” out lol. This is one of my fav games this gen, and I put 35+ hours into it to do mostly everything. Still a few achievements left to unlock, but I really did most of what I wanna do. Forewarning, I skipped literally every single Cutscene, so I have no clue about the story, sorry :p. I play games for gameplay and if you’re looking for a great SRPG to scratch that FF Tactics itch, look no further. If you’re not put off by the art style, then this game should be an instant classic for you.

I have no clue why this game doesn’t get more praise. It’s an easy 9/10 if not a 9.5/10 for me. I’d have to really think of things that I didn’t like, but I can’t think of anything off the top of my head. Between the amount of classes/jobs you get to pick, to the varied difficulty options, to the amazing customization you can give each character with their skills, this is easily one of the best SRPGs I’ve ever played. Best part is, IT’S ON SALE! This can be yours for only $15 right now! PLEASE check this out.

Missions and Monsters is the first expansion to Fell Seal: Arbiter’s Mark and brings several new additions to enrich the gameplay.

Thx Sik! Took me ~40 mins to make lol. Got tired of screenshots taking forever to upload, so I yanked a few that I found off Google.

It’s def not like Xcom, but I think it’s similar to Fire Emblem? I haven’t played Fire Emblem tbh, but going from videos it looks similar-ish. You don’t actually get to fight out the battles. You choose a command from where your character is and they do the Attack/Skill/Magic, etc. right there. If that makes sense?

I’ve had this on my wish list waiting for a sale. I’ve got a lot of other stuff in my backlog but I should probably jump on this. Maybe someone can chime in on the story impressions because FFT was strong there.

It’s a turn-based strategy (RPG) game. I suppose the combat would be like Xcom and Fire Emblem, moving troops around, taking turns, leveling characters, picking skills, etc… I believe FFT was the benchmark for this game, but they are all similar in how they play I guess.

I’ve had this on my wish list waiting for a sale. I’ve got a lot of other stuff in my backlog but I should probably jump on this. Maybe someone can chime in on the story impressions because FFT was strong there.

It’s a turn-based strategy (RPG) game. I suppose the combat would be like Xcom and Fire Emblem, moving troops around, taking turns, leveling characters, picking skills, etc… I believe FFT was the benchmark for this game, but they are all similar in how they play I guess.

that sounds similar to fire emblem if you can level up units and choose skills. That sells me on the game, and for $20CDN it won’t hurt to check out

Same thought! Love threads like these, even though turn-based RPGs are really not my style.

I had no idea this was a thing but ff tactics is an all time fav of mine. Will check it out

I had no idea this was a thing but ff tactics is an all time fav of mine. Will check it out

I’ve been itching for something to come close to Tactics and this is the closest thing I’ve found. I hope you enjoy it if you do buy it. I absolutely loved it!

Enjoying it so far

Enjoying it so far

Awesome! Pretty sure it just gets better from there. The more classes you get to unlock, it just gets addictive trying to level/Max them out. At least for me, lol.

That’s the one thing I can’t tell you about the game, I’m sorry lol. It’s why I can’t review games, cuz I just skip story when I can (and this game lets you just literally skip entire scenes, so I never saw a blip of story). Maybe somebody else here will be able to tell you, but I just play for gameplay in most games :).

Awesome! Pretty sure it just gets better from there. The more classes you get to unlock, it just gets addictive trying to level/Max them out. At least for me, lol.

It’s been on my radar for awhile, the story was my concern mostly.

It is okay so far. Just like the game mechanics, the story feels like it is inspired by FFT too. The dialog isn’t as serious and the bad guys are more straight forward “fu fu fu we’re bad guys” but the overall theme of a normal MC caught up in some political/power struggle is there.

Game is great. Got the 1000/1000 for it. Highly recommended if you liked FFT back in the day. Story isn’t as good but it’s still fine. Can’t recommend enough if you like SRPG’s.

I’m mildly ashamed I haven’t played this yet, as I helped back the Kickstarter for it (I sometimes try to do so on indie games that are coming to Xbox and look interesting). There are some interesting concept drawings / animations etc on the Kickstarter page. 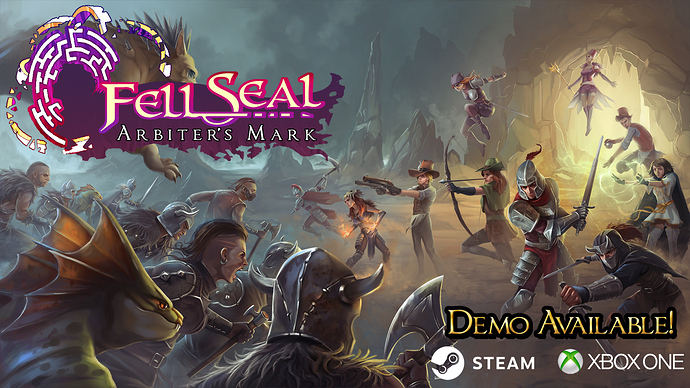 I’ve had this on my Steam wishlist for a bit now because of the comparison to FFT. I’ll probably pick it up on Xbox instead in a future sale.

FUCKING AWESOME !!! FF Tactics Advance is one of my favorite games, will definitely check this one out

Purchased this game on the current sale. I’ve only played for about 30 minutes and I’m not sure on it yet. I played FF tactics in the past, but didn’t make it too far.

Will play another few hours and then check in here again.