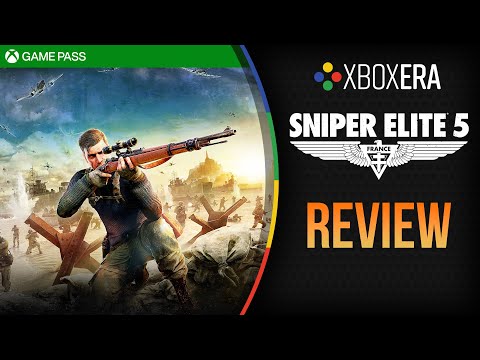 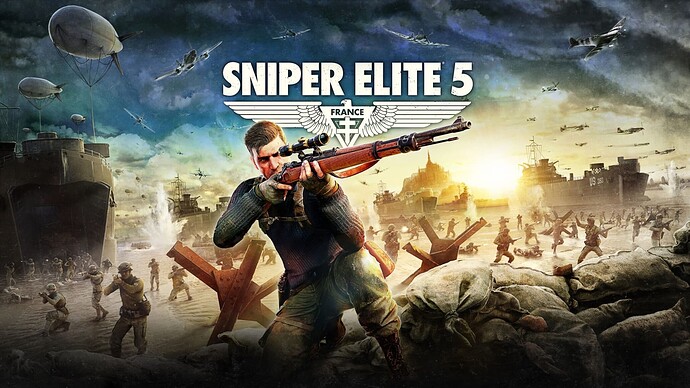 Dark clouds loom over Europe.  Freedom itself is in peril as Nazis once again carve a murderous and destructive path through a formally peaceful land.  What we need right now is a hero, a real hero like Karl Fairburne ‘Sniper extraordinaire’.  Last seen kicking his heels after working his way through Sniper Elite 4, developers Rebellion have decided that it is time to unleash his ‘very particular set of skills’ once more in the fifth installment of this award-winning series.  Join me as I get tooled up in an overfamiliar cliché montage and set out to liberate 1944 France, in the XboxEra review of Sniper Elite 5. 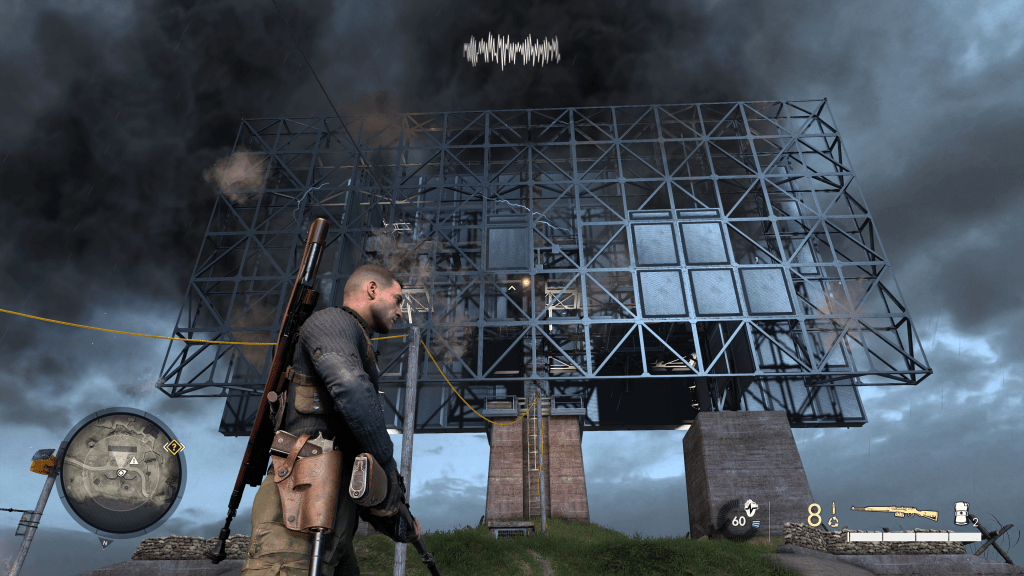 The game is set around D-Day and begins with our hero softening up ‘Atlantikwall’ German defences around the coast of Brittany just before the beginning of the allied invasion.  After coming across intelligence concerning a dastardly new Nazi plot known as ‘Operation Kraken’, Karl needs to find as much information as he can about a new superweapon and then close down the project before it can be unleashed.

Players familiar with the series will have a general idea of what to expect graphically from this title but this has to be the best looking Sniper Elite yet.  Something called ‘Photogrammetry’ has been used to capture real-world locations and allow them to then be stunningly recreated in game form.  The fine detail on screen is also pretty impressive and caused me to stop and marvel at it on several occasions.  For example, after landing on a beach in a dingy rather than getting straight into my usual routine of tagging enemies with my binoculars and then killing everyone in a grey uniform, I spent a minute or so just marveling at the motion of the waves, the pebbles, the rocky cliffs and my wet clothing as the rain poured down on me.

At the start of each chapter, it is possible to pull up a map of your local environment and a list of the main objectives that need to be completed before you can exfiltrate and finish the mission.  As more information is discovered from sources such as locked safes and overheard enemy conversations more objectives are added to your to-do list.  Multiple side missions are also available ranging from sabotaging enemy defences to tracking down and eliminating named targets.  Eliminating these targets in the way specified in the mission brief unlocks special weapons to be used in-game.  On one occasion I failed to poison an officer and missed out on unlocking a rifle but I soon got over the disappointment by rather satisfyingly blowing him up with a ‘Panzerfaust’ anti-tank weapon. 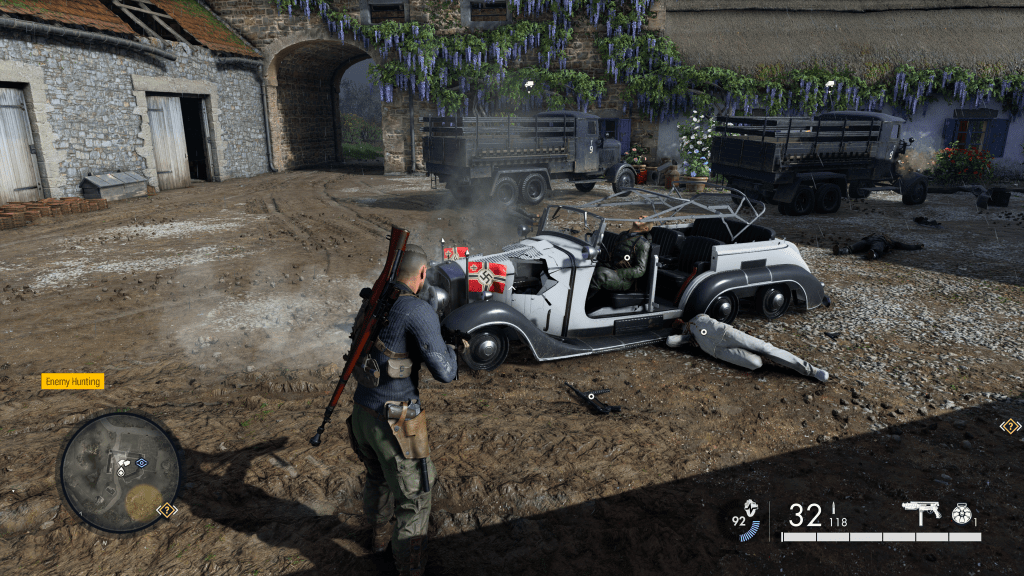 The level of immersion is much greater than it was in the last game, to the extent that I even discovered events taking place while exploring my surroundings that were never mentioned in my mission brief or side mission list.  A meeting between Japanese officers and their Nazi counterparts was very enjoyable to disrupt (killing everyone obviously) but was only signposted by a few Japanese flags that I had spotted flying around the area.

Some of the larger objectives can be completed in two different ways bringing a welcome level of flexibility to proceedings, there is no set order in which to fulfill any of your goals and there are even multiple exfiltration points this time around.  The ability to climb in certain areas is refreshing as it makes it much easier to traverse to the perfect sniping spot or hidden weapon upgrade bench.

An Assassin that’s second to none

You can choose to play in a completely stealthy manner, be an all-out killing machine, or mix and match the two playing styles.  It is great fun to set yourself up in an elevated position and snipe enemies ‘ghost style’ until there is no one left standing but it is also possible to just run and gun your way across the map. 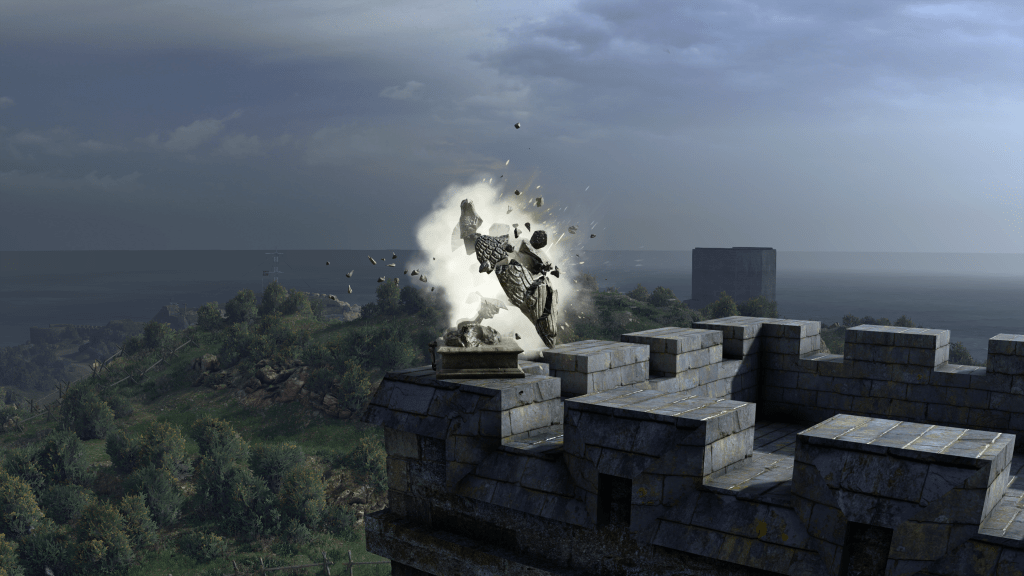 It is important to remember that a sniper’s rifle is not of much use when fighting at close quarters or inside buildings.  Your secondary weapon (a submachine gun), pistol, and knife can be wielded more efficiently in those situations.  The Spy Academy mission which involves breaking into a heavily guarded fortress to eavesdrop on a secret meeting took me about three hours to fully complete and was the perfect illustration of how both of these play styles have to be combined to succeed.

I tended to survey my surroundings with binoculars first to tag as many enemies as possible and then took out any alarm systems before I did anything else.  Obviously, it is not always that simple with multiple alarm points being hidden from view and numerous sentries or harder to kill ‘Jaeger’ soldiers patrolling the whole area.  A certain amount of planning is necessary to move around the map without being spotted and coming under attack from all sides.  Vantage points marked on the map are always worth using to work out a route with a higher chance of successful evasion.  Skilled enemy snipers are positioned high up around maps and are best avoided until you are in a position to neutralise them.

He’s got a powerful weapon

Weapons can be picked up from your victims and used until they run out of ammunition, there is a range of different bullet types including ‘wooden non-lethal’ (which I had no use for) and Subsonic which are great for stealthy long-distance killing without giving away your presence.  The usual selection of anti-personnel mines, grenades, TNT, etc. are available and can also be used to wreak carnage on an unsuspecting enemy.  Vehicles such as armoured cars and tanks turn up at tactical pinch points on many of the maps and require an extremely careful approach as well as particular types of weaponry to take advantage of their weak spots. 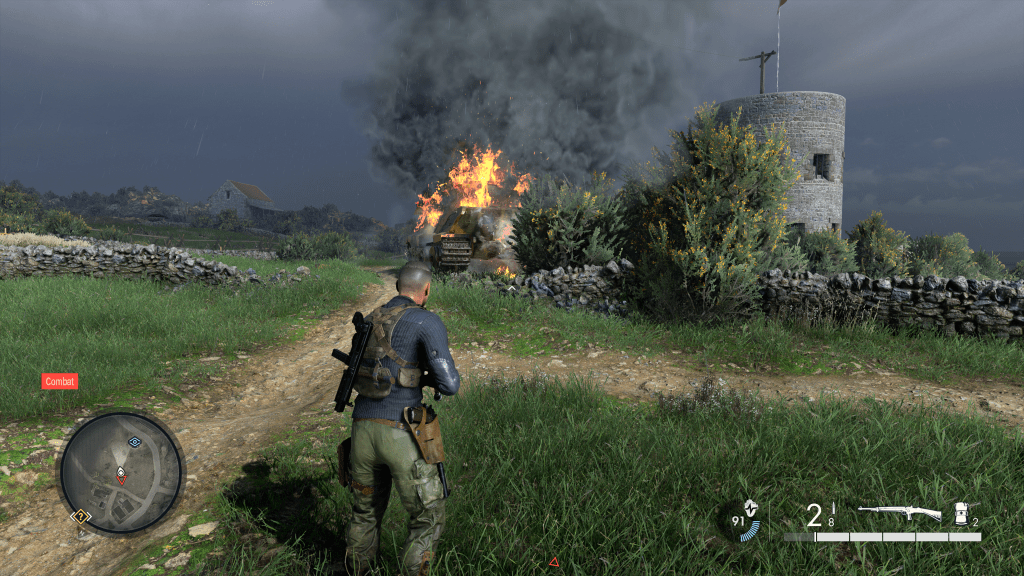 It is not possible to complete certain aspects of missions without gaining access to locked areas so it is a requirement to search the bodies of those you have slain (particularly officers) for keys.  Some alternative courses of action are however available to you if you have discovered a crowbar, bolt cutters, or satchel charges somewhere on the map.  Searching bodies and your surroundings is also necessary to keep your ammunition and bandage supply topped up.  Being wounded by certain enemies not only depletes health Bars but will also cause you to continue to bleed out until you apply a single bandage to stop the bleeding.  I recommend always having at least one bandage on your person in case this occurs.  Skill points are earned during gameplay which allows you to modify your sniper abilities and loadout as you see fit.

Cut scenes are cinematic in scope, particularly the glider sequence from the D-Day landings, and my old favourite the ‘Kill Cam’ has been enhanced to be even more grisly than ever before.  Up close knife takedowns, pistol, and sub-machine gun kills can now all kick off kill cam animations as well as the sniper rifle.

Or crouched on a rooftop somewhere

A new feature of Sniper Elite 5 is the ability to enter another player’s campaign as an ‘Axis Jaeger Sniper’ via ‘Invasion Mode’ to try and eliminate them for big rewards.  The other player gets rewarded if they can stop you.  As well as the main campaign the game package also includes Adversarial Multiplayer and the ability to play Co-Operatively. 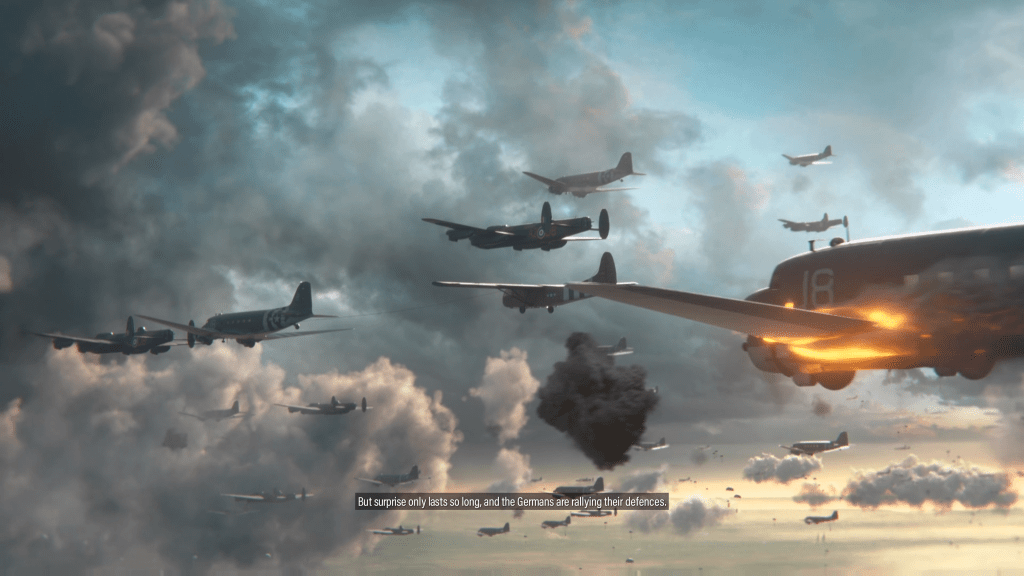 The game ran well on my Xbox Series X although I did experience a few slight glitches such as falling through the map when crossing a beach, getting stuck in one spot, and being unable to fire or reload my rifle even though I had ammo on two different occasions.  In the grand scheme of things, these were relatively minor issues though and I have reported them to the developer in case they were unaware of them.

There is added depth and complexity to this title that elevates the experience above the solid game that went before it.  Too many series continuations just recycle the same old tropes but in this instance, I can gladly state that this is not the case at all.  If you are a fan of Sniper Elite 4 you will certainly enjoy playing this game.  Available to play from day one via Xbox Game Pass, this is not (in my opinion) an experience that you can afford to miss. 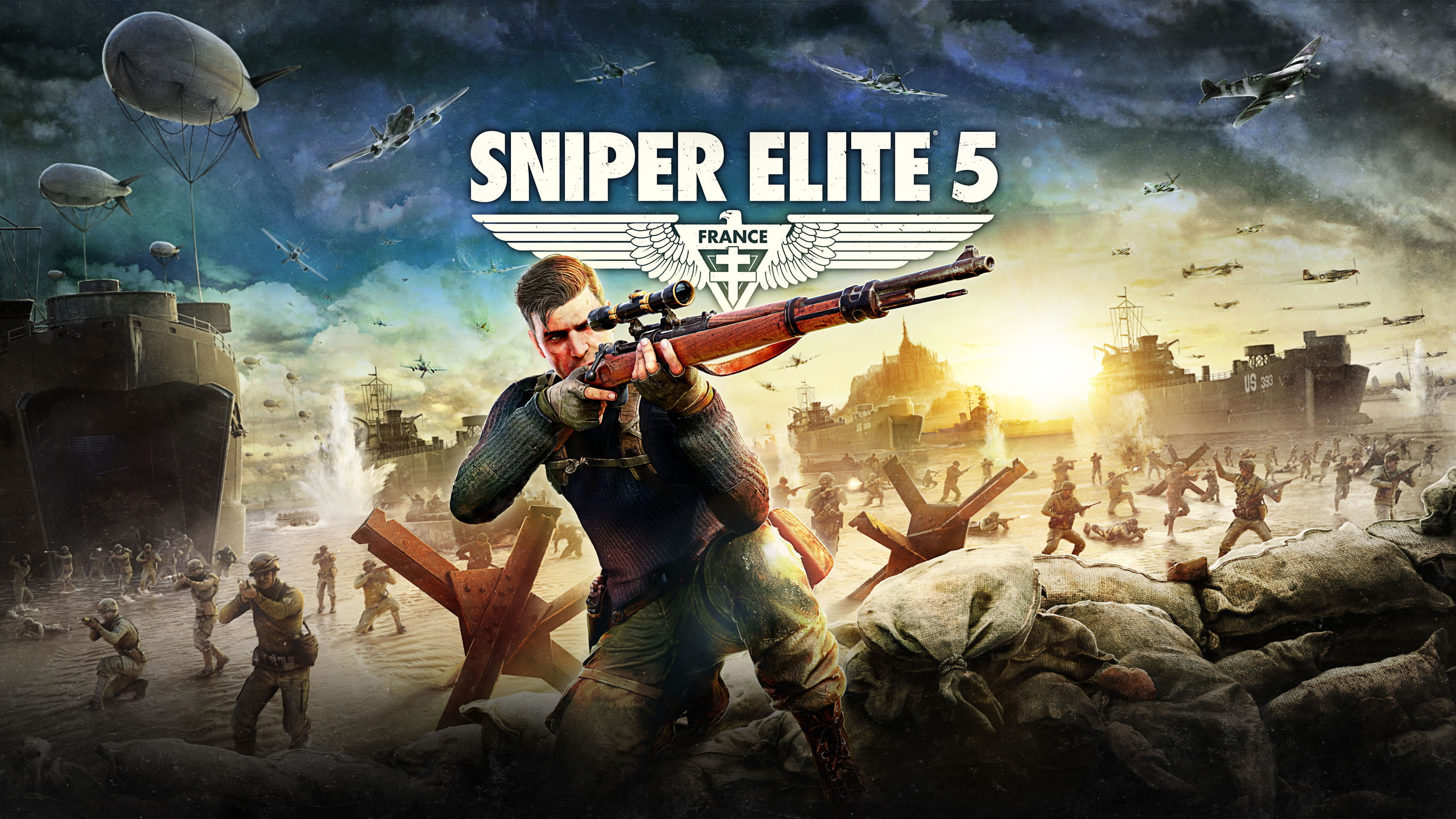 Sniper Elite 5 is rated 'Strong' after being reviewed by 16 critics, with an overall average score of 80. It's ranked in the top 17% of games and recommended by 75% of critics.

80 on OpenCritic so far.

Saw the video review, great review. Looking forward to trying this. I was pleasantly surprised to learn that you can completely stealth through, wiith multiple options, targets, and appears it has somewhat Hitman-like map freedom and structure

80 on OpenCritic so far.

Up t0 81. Seems like a good Game Pass addition.

I saw the complaint about grenade throwing, can you still turn on the option to make them stick where it’s thrown? I do love how they seem to have increased stealth options, that’s something I loved about the previous one as well. Also glad they’ve added more tool options like the cutters and knife

Maybe this will be my first game in the series… Looks fun.

I saw the complaint about grenade throwing, can you still turn on the option to make them stick where it’s thrown? I do love how they seem to have increased stealth options, that’s something I loved about the previous one as well. Also glad they’ve added more tool options like the cutters and knife

The grenade throwing is not terrible but a bit off. You sometimes seem to throw it backwards over your head and it is easy to hit the edge of doorways instead of throwing it into a room.

I’m not sure about the sticking option to be honest.

The grenade throwing is not terrible but a bit off. You sometimes seem to throw it backwards over your head and it is easy to hit the edge of doorways instead of throwing it into a room.

I’m not sure about the sticking option to be honest.

OK, I can definitely see that being a tad annoying. And for sticky grenades, it used to be in your equipment menu when you select each thing there was an alternate option, and you could turn it on so you could (for example) throw a grenade and have it stick to someone’s head.

I’ll have to check the video and I definitely will be playing this one too.

Will give this one a go, for sure, this weekend

Maybe this will be my first game in the series… Looks fun.

Yeah, boy. Shoot them Nazi’s right in the reindeer balls

It’s crazy how each game has improved. V2 is a classic but shows its age now.

4 was really pushing forward the series on becoming a template for the stealth action genre with more open environnement.

It seems like 5 is embracing it and I can’t wait to play it.

Yeah, the improvements between v2, 3, 4, and what I’m seeing so far here are amazing.

Will give this one a go, for sure, this weekend

Yeah, boy. Shoot them Nazi’s right in the reindeer balls

Hey don’t use my secret real nam…wait…carry on

@xboxera
It's some evening#CoffeeWithCabesa as#SniperElite5 has just launched into#XboxGamePass and we're playing it maxed out on PC! Join us, won't you? twitch.tv/thexboxera
1 Like
Doncabesa (Jesse Norris) May 26, 2022, 2:47am #15

Holy crap, two hours to do the first mission and I’m in love, that was so fun. Very much feels like an action-focused Hitman. 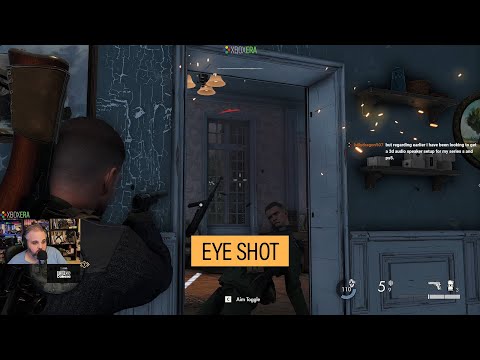 My VOD will be up here, full first mission for 2 hours. Will take a while to upload but if you check it tomorrow it should at least be 1080p (will be 1440p eventually)

Holy crap, two hours to do the first mission and I’m in love, that was so fun. Very much feels like an action-focused Hitman.

is it in xcloud?

is it in xcloud?

excellent, will play it tonight then