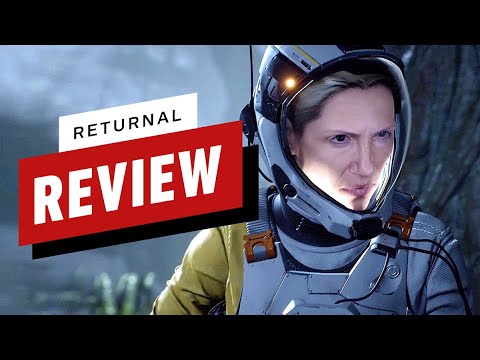 Its roguelike runs are too long and it needs a way to save in the middle of them, but Returnal’s third-person shooter action, clever story, and atmosphere are excellent. Returnal in my opinion is an exploration of madness and perhaps the genre itself. As I was playing the game I couldn’t help think of Albert Einstein and his belief in insanity: "“The definition of insanity is doing the same thing over and over again, but expecting different results.” When a game can get me thinking of such heady topics, I know I’m onto a winner. Returnal is something spectacular and as one of the first titles for the PlayStation 5, it will cement the console as a must-have. If there are any issues it would be that I have noticed people have been turned off by the price of Returnal. Checking in at €79.99, Returnal will turn away many potential buyers. However in my personal opinion this game, this story, this experience is well worth the cost. Housemarque has delivered the PS5 promise with Returnal. All the console’s bells and whistles enhance the experience, making this a real showpiece for the hardware. But more than that, the game is a force to be reckoned with; the breathless combat, super slick gameplay, and the subtle but unsettling story combine for an experience of surprising scale. Rogue-lite aspects mean it won’t gel with everyone, but for those looking for a challenging, addictive arcade shooter, this comes highly recommended.

Returnal is constantly unsettling and consistently challenging. Its mysterious story and demanding action feel intense, urgent, and fresh. The fast-moving combat manages to appear incredibly daunting, bordering on overwhelming, without ever actually becoming insurmountable. Every moment is a rush, either because you just barely evaded a giant purple laser or because you have no idea why there’s an Apollo-era astronaut following your every move. Do you need to be a little brave to play Returnal? Yeah. Do you need to be glutton for punishment? It helps. They say that anything worth doing should scare you at least a little bit. I’m not sure if that’s always true, but Returnal makes a strong case.

“Barring a sci-fi horror tale that doesn’t quite nail the slow building reveal, Housemarque has absolutely succeeded with their fusion of third-person shooting and roguelike elements in Returnal, one of my personal favorite PlayStation 5 titles so far.” …

It will get a lot of 9s from those that like rouguelikes but the meta will settle at around 80 because of a good portion of 7s and 8s and the odd 5 and 6s.

I remember gears5 was also really hyped up and did get a lot of 9s but some 7s lowered it,

I would not be surprised if it goes below 80s, it will be divisive lol.

I believe it will be around the mid 80s, previews have been very positive so far from what I’ve seen. I think it’ll get a lot of 8-9-10s but a bunch of reviewers who don’t like roguelikes and/or hard games will drop the average.

Voted 85-89 based on intuition and what I’ve been hearing from the previews.

Will probably settle at 86 methinks.

From reading previews I believe it will get 85-89, and the game does look pretty good

Returnal looks like a fun game but Im not gonna bite at the launch price.

Weather or not I get the game depends if the game is tedious or not. Often in games Im just playing it to finish the story and the actual playing part is just to unlock the next bit of the story. This is not the case in some games though where the gameplay is fun but they break it up with platforming, puzzels, exploring etc

This is all a gross overestimation based on previews and released gameplay.

82 is my guess. Housemarque is an excellent studio with an average of 80 on MC over 18 games including PC ports.

Very excited for Returnal. It is right up my alley. My guess is mid 80s, which would be really good considering this game is much larger in scope than Housemarque has ever made before, along with it being a new IP.

I have no idea how a rogue like game that’s 70$ can review high 80’s like people think.

It seems well deserving of a 9/10 for me, but I wouldn’t adjust a score based on price tag, game length (within reason), and similar “value” elements. The question is how journos few those factors and the difficulty.

It seems well deserving of a 9/10 for me, but I wouldn’t adjust a score based on price tag, game length (within reason), and similar “value” elements. The question is how journos few those factors and the difficulty.

Don’t know why you’re assuming I’d give Inside a 10/10, but I also don’t know how you missed the “(within reason)” either.

Bad faith exaggerations aside, I think when a game is good, I’m a lot more lenient on moving my meaningless review score based on price. There have definitely been $60 games I’ve beaten in one sitting or weekend that I’d score highly.

I’ve already said I’m worried I’ll have a quick run through of this game that’s great and then be done with it forever. Hoping I’m wrong.

I have no idea how a rogue like game that’s 70$ can review high 80’s like people think.

It’s definitely gonna get that “Sony review bump”. Kind of like when I go to a local restaurant that got 5 stars on Google(for being a local place) and the food is mediocre or not very good.

Personally, I have never reviewed/scored a game based on the cost/price which honestly, isn’t even a factor for me. I review a game based on the game itself. I know a lot seem to have an issue with the $70 price tag and while I know that the game is much more in other regions, I bought Chrono Trigger new and sealed back in 1995 for $80 U.S. for SNES so seeing a $70 game 25+ years later considering how much is spent on these games and the tech involved doesn’t factor in to my personal score and if anything, im getting a steal. Plus, the vast majority of SNES games back then were $60 day one so $70 now isn’t a big deal in my eyes.

I simply go based on the quality of the game and how much I like/dislike the game. Price has never made me like/dislike a game more or less because it’s up to each individual if the game is worth buying and that should be determined on if you want to play the game.