How much more would you pay for Xbox Game Pass Ultimate, if the service got big 3rd party games at launch?

Pretty straight forward - we pay more for Game Pass Ultimate, but get big 3rd party AAA games at launch. How much are you willing to spend on the subscription in this scenario?

I would pay $20 for Game Pass in general as I don’t play on PC and have zero interest in X-Cloud. I’m hoping that 3rd party announcement is Ubisoft and that their games go on Game Pass day one because that would be huge.

I don’t see EA being huge unless their games are on Game Pass day one. If it’s anything less than that (regardless of the 3rd party publisher), then I honestly don’t even see the point because what am I getting as part of this deal?

Honestly, I’m not interested in paying more than I currently am. If we got some really big 3rd party games day one, and if it was frequent, then I would play slightly more. But I don’t really care for all this day one talk. I’d rather we got recent games often, i.e. six months after the launch, but keep the same price, but I’m well aware many others would be extastic to get big games day one.

It would depend on the games.

I’m pretty happy with gamepass how it is now especially with the addition of xcloud, signed up for it for first party games and that will likely stay the primary reason I’m subscribed (whenever i need to renew anyways). I’ve been playing RDR 2 on gamepass for xbox and was more than willing to wait the year and a half for that and lots of things have been coming earlier than that lately. In fact because of gamepass there’s very few things I want or need to play day one, at least not that’s AAA.

£20 I would pay if it had third party day one games. The pricing is going to be a big issue and yes PS5 will sell - but GPU and the console is easier to get into next gen, more than a PS5 and £60 games you will need whatever the console pricing

I don’t think $30 would be attractive to people. It has to be low for people to want to subscribe. A lot of people don’t even buy 10 games a year. Those people were happy with the few games they got a year and if game pass costs something like $30 I don’t think they would subscribe 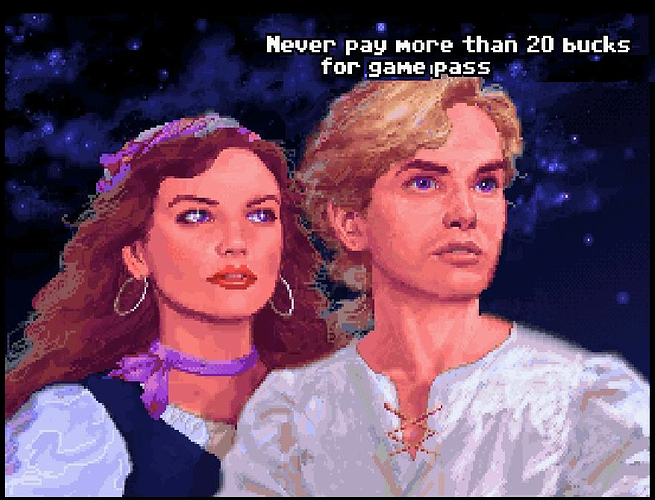 Honestly, none. $15 is a good sweet spot for the service, especially to promote growth. They would have to have multiple 3rd party publishers committing to releasing day one on the service for it to make sense to up the price for me.

Depends on the library, but I would honestly would pay $30+ a month for a service that let’s me play every single game available on the console.

I wouldn’t pay more just because of that. My gaming time is limited, and GP already has way more content than I can handle. In addition to that, most of my gaming time is spent on MS games and indies. With the growth of XGS, I don’t see that changing anytime soon.

Depends, is DLC included? Even then probably not much more as I’ve laid off a lot of newer releases and am playing a lot more service based games lately.

30 euro a month would be my limit for what I get offered now even. It’s half of a full game and I game more than one full game a month.

However if they would crack up the price to that level I would appreciate if you can pauze your subscription for a month. Like if I want to travel to Botswana or whatever, where i do not even want to game I would not want to pay for that month of subscription.

But for that amount they have to add a couple of extra features.

I promised myself to never pay for FIFA again. But if it is on gamepass… I’ll be cornered.

They unfortunately already took the name ultimate, cause how would the super all in package be called. Xbox gamepass super ultimate eXtreme.

A bit unfair as I have 3 years prepaid, but depends on the games. If they have new games from Private Division/EA/Ubisoft/Square Enix/Bethesda I’d be willing to pay more than say, EA Sports/Call of Duty/2K Sports if that makes sense.

Depends both on the quality and frequency of new 3rd party releases.

From “not more than I already pay” to “Up to 30 bucks” my range of possible answers is big.

Ideally I would not want to spend over 15-20 Euros per month on it, but to be fair I spend far more on cable as it has a lot of the sports, TV shows and movies I like at their release (or live, in case of live events). In a crazy scenario in which, say, Game Pass offers all EA, Ubisoft, Activision and T2 games day one, I could see myself spending twice or beyond what I’m currently paying because the value skyrocketed. But one of the reasons Netflix and Spotify boast the numbers they have is because the vast majority of people in developed countries can easily “forget about” 10-15 bucks a month. 30-40 is a different deal.