Welcome to the XboxEra E3 “Betting” and Bingo Thread

Obviously, we aren’t betting for real, but there are two games we can play. I’ve built some Bingo Cards, and a game where we can bet. Click on which game you’d like to play… you’ll find more info there.

They will live stream in footage of crowds at the fanfest. 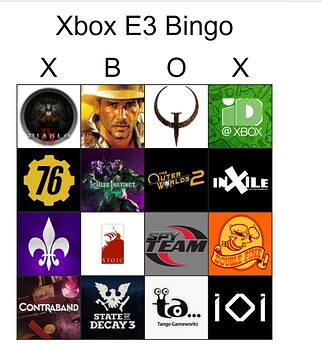 Create your own bingo cards with words and images, or choose from hundreds of existing cards. Print them or play online. It's easy. 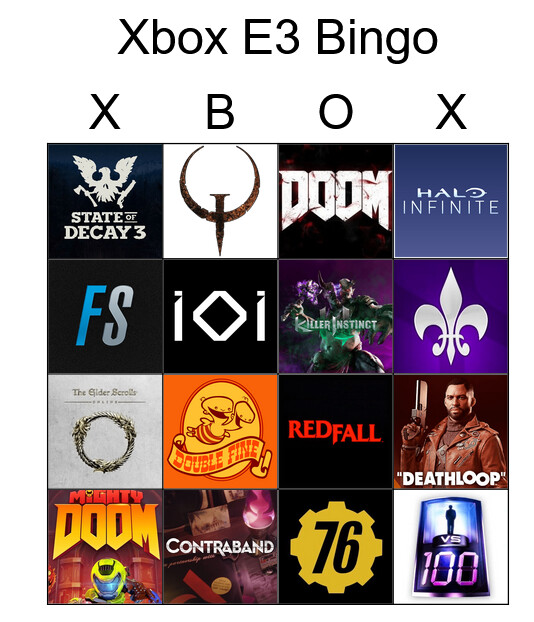 How do we change a box ? I can just mark or unmark it.

I wish I had your guys’ confidence

can the mods have the winner get a title like “the predictor” or “Mr E3”. Something like that to spice it up. They will hold the title until the next E3

1. What will open the Xbox + Bethesda Games Showcase?
Starfield
2. What will close the Xbox + Bethesda Games Showcase?
Avowed
3. Will all games shown at the Xbox + Bethesda Games Showcase be day one on Game Pass?
No
4. Will Xbox announce a first-party/second-party (through Global Publishing) Japanese-developed game during the show?
Yes
5. What announced titles will re-emerge this year (Pick up to 5, 1 point for each)
Starfield, Redfall, Avowed, Forza Motorsport, Contraband
6. Will Starfield get a release date? (Double Down Eligible)
No, double down
7. Will Redfall get a release date? (Double Down Eligible)
No, double down
8. Will Todd Howard’s E3 presentation on Starfield be over or under 20 minutes long?
Under
9. Which Xbox/Bethesda Studios will announce new games? (Pick 5, 1 point for each correct answer. No Global Publishing. Double Down Eligible).
MachineGames, ZeniMax Online, Compulsion Games, inXile Entertainment, The Coalition
10. Will Xbox announce an acquisition during the show?
No
11. Will Redfall have more than 4 playable characters? (Leaks imply possibly, PR implies no way!)
Yes
12. Will Forza Motorsport release in 2022?
Yes
13. Will Deathloop be a part of the show?
Yes
14. Will Xbox announce a new game with a Disney IP (Star Wars, Lucasfilm, etc.)? (Double Down Eligible)
No
15. Will Activision-Blizzard have a presence at the show (i.e. Diablo 4 trailer?)
Yes
16. Will we see a AAA third party title announced for Day One Game Pass?
Yes
17. Will we see an unannounced Xbox moneyhat? (Double Down Eligibile)
No, double down
18. Will the show score above a consensus B on the Keighley Twitter Poll?
Yes
19. Will the Keighley pre-show feature people oblivious about Xbox?
Yes
20. Make a bold prediction about the show! (Double Down Eligible)
Not really bold but there’ll be more FPS boosted games announced
2 Likes
peter42O (peter42O) May 25, 2022, 4:39am #10

At least 75% of the games shown/revealed will be gameplay trailers.

Starfield - get it out of the way so people aren’t thinking about it the whole show.

No. I think if that is happening that other shows would be better for it.

An exact date? No, it will get a window.

No it will just get a window. Maybe a beta date will be announced.

No. The Xbox showcase will be 100 percent games.

Yes this is pretty much the only showcase that makes sense to show it.

Nope. Xbox hasn’t really shown much desire to build up other corp’s IPs. There could be collaborations though like the Sea of Thieves + Pirates of the Caribbean.

No. I guess maybe if it’s day one Game Pass, but I don’t think that is too likely. Also it may not even come this year.

By moneyhat, do you mean an exclusivity deal for a AAA project? No. I think that money gets used for Game Pass day one deals.

Yes. Last of Us Factions.

Not necessarily. The cloud puck thing or the Game Pass family plan will be there with a teaser of Xbox exclusives.

New IP? I will bet no. There could be some interesting video game adaptation of a film or book property that hasn’t gotten a game before but not new IP.

Create your own bingo cards with words and images, or choose from hundreds of existing cards. Print them or play online. It's easy. 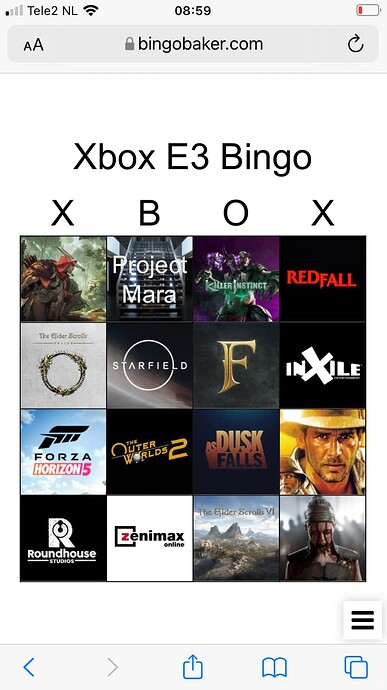 Also yes 8. Will Todd Howard’s E3 presentation on Starfield be over or under 20 minutes long?

Slightly under, with a promise of a deeper dive later

Not on original release. Borderlands style character dlc are likely, but not at this E3.

I could see a Diablo 4 trailer, so yes

The will be a cool new Xbox publishing game announced.

Geoff bragging about the line-up

Geoff bragging about the show

Yes. In the form of a Starfield teaser 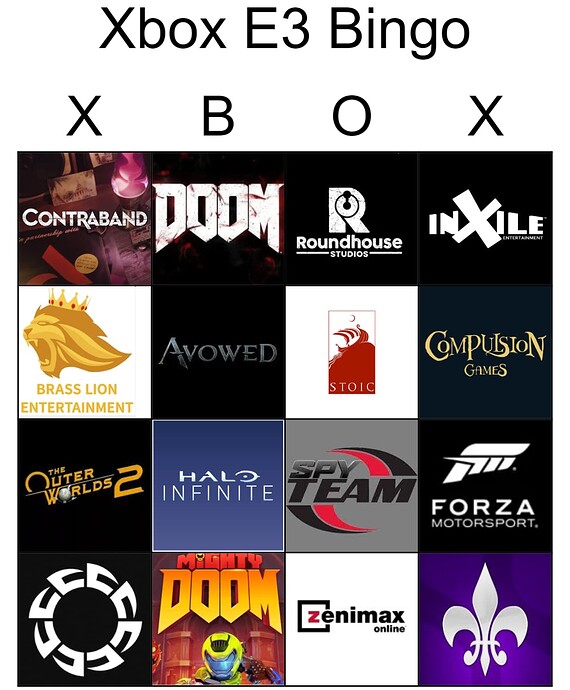 Phil has a Starfield shirt on

No (but the vast majority will)

No (due to Sony marketing deal still being in place)

Xbox will announce a major game for 2022 that is not Forza Motorsport, Pentiment or Belfry. That game will be Wolfenstein 3.

Yes, but not the type of AAA that some people would prefer

Everything shown will be on Game Pass

Banjo, KI, and Phantom Dust arnt on this so theres a good chance all will be hit. Lol

3.Will Kojima make an appearance?

4.Will Xbox first-party have a presence? (No technicalities: ABK showing up does NOT count… yet. Similarly, Double Fine hosting Day of the Devs after also does not count.).

8.Will we get a tease for The Game Awards?

9.Will Marvel’s Midnight Suns show up? 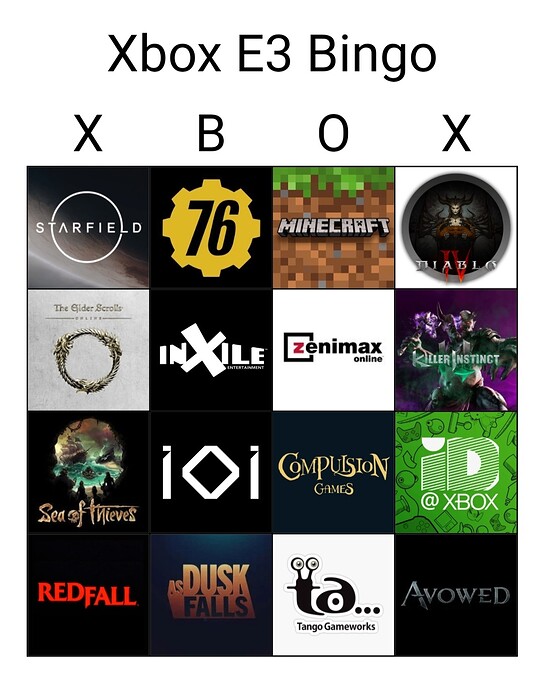 An Xbox portable console will be revealed.

How do we change a box ? I can just mark or unmark it.

Boxes are randomized. You can go to the link and reroll though.