Do you think Starfield, Fallout, The Elder Scrolls, Doom, and all other Bethesda IP will be Xbox/PC exclusive? Why or why not? 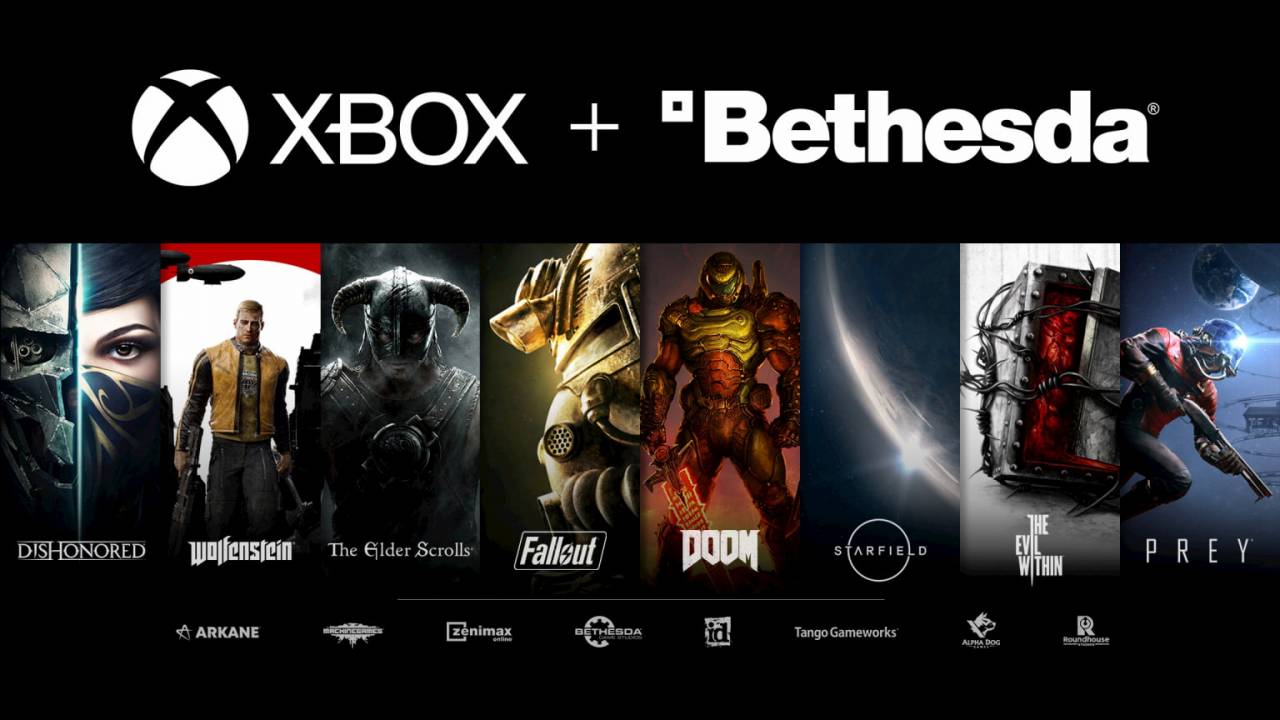 There has been a lot of debate about this topic, so I’m curious where everyone stands a few days after the acquisition.

Here’s my case why Xbox will keep these games exclusive

Why Bethesda's Games Will Be Xbox and PC Exclusive - XboxEra

MS is all in on Gamepass and growing that subscription. You don’t grow your subscription by putting your games on PS5. Doesn’t make sense. The only way I see them putting their games on PS5 is if Sony allows Gamepass on their system.

Also when Phil talks about having people play their games everywhere, hes not talking about PS like some people pray and want to believe. He’s obviously talking about XCloud on your Android device or whatever other devices they put XCloud on. They can reach more people that way more than any game on PS ever will.

The generation starts at zero so this is the perfect time to get people into your ecosystem. Not give them a reason to stay on theirs.

Permanent. They can reach Playstation players with the games on xCloud, which should be a SmartTV app and a PC app by the time Starfield is ready.

They finally got system sellers. I can’t see Phil being that dumb to release them on the other console. Nintendo, sure release all of them on there if you can. What drives people to playstation? Ask yourself that and you answered the question.

None of those games have the massive appeal of Minecraft, so yes they will be Xbox/PC exclusive.

You don’t spend $7.5billion to have games on non Microsoft platforms. I believe Microsoft end game is to drop a platform exclusive every month, and truly become netflix of gaming. Plus, I do see in the near future that xcloud app will be on smart TVs, so wouldnt make sense to put games on other platforms

If the ultimate goal is to push gamepass subs and to attract people into the xbox ecosystem, then keeping these titles exclusive would be the best way to do it. Although i do have a feeling that MS may release some Switch ports from time to time. However, I definitely don’t see them coming to Playstation consoles.

If they solely spent that money for Game Pass and some sales (which barring Fallout 4, ESO and Skyrim have been on the decline for Bethesda) they would have signed an EA Access type deal and put the rest of their savings into partner studios.

This is a move based on IP, merchandising, tech and, of course, exclusives.

They have no reason to pull support for GAAS titles like Fallout Shelter, Fallout 76 and ESO. Otherwise, I think we’ll see XCloud/PC/Xbox concurrent launches for exclusives and maybe ports to Nintendo down the line. Also possible ports of niche titles if Game Pass doesn’t justify the cost (which it should. It’s about engagement and keeping people subbed, not pure sales).

They will fulfill their obligations which are lessened as Bethesda has only comitted two games to PS5 but all of their other titles have no platforms attached (a tactic PlayStation took advantage of when moneyhatting Deathloop and Ghostwire ironically enough). The only way I see them giving big exclusives to Sony is if Sony allows a tit for tat deal and/or Sony allows them to put Game Pass and they get 100% of the revenue or close to, with Xbox live integration. At least with Steam and Switch they allow Xbox Live, and with Steam they also keep people in the MS ecosystem by requiring Windows 10. Switch is never day and date barring Minecraft.

The generation starts at zero so this is the perfect time to get people into your ecosystem. Not give them a reason to stay on theirs.

I think this is something I hadn’t considered before. PS5, as of now, doesn’t have a sizeable customer base. Additionally, it’s not unreasonable to think that Xbox, with the right portfolio of exclusives for the broader Xbox platform (console, PC, xCloud), could even the playing field to the point where more people choose Xbox as their primary platform.

People wanted exclusives and were bashing Xbox for not having true Xbox exclusives.

Here they are now…System sellers like they were asking

In fact these same people just don’t want Xbox to have exclusives, that’s the truth

They wont be on the PS5, for a few reasons. Sony allowing the games on thier platform means they would have to cede to MS demands, and MS won’t allow due to Sonys anti consumer attitude

I think permanent exclusive to Xbox and PC. These are insane exclusives to have and that is exactly what drives people to your platform and/or service.

But the one argument I keep seeing that makes people strongly believe all announced games, at least will definitely be multiplatform is what Pete Hines said

But the key point is we’re still Bethesda. We’re still working on the same games we were yesterday, made by the same studios we’ve worked with for years, and those games will be published by us.

They keep hanging onto that and in their mind that would include Starfield and TES VI, since they’ve been working on these games for a while now.

I’m not sure it’s any indication at all that this means multi. At the same time I do wonder why Bethesda felt the need to say that.

Timed or total exclusive. Aside from everlasting games like Minecraft and Fortnite, games have hype cycles on the Internet. What Microsoft wants is that you’re in an Xbox ecosystem when the next viral game like Halo Infinite or Elder Scrolls arrives, be that on Windows 10, Game Pass, retail, digital or Game Pass. While the value proposition of Game Pass is inviting, it’s not necessarily enough to sway folks over from other consoles, but having the follow-up to Skyrim not land on PS5 or Switch is. If they were only interested in offering the same as others but cheaper, they would have just gave Bethesda a large sum and secure all their titles day one on the pass. Would have been cheaper, too. Them taking over the entirety of Bethesda tells me the games will be PC/Xbox exclusive at launch surely. Will they bring them to PS5 a year or two later? Will smaller games come to Switch some months later? It’s possible. But the games’ main hype cycle will happen when Xbox is the only console to play it on.

The big-hitters like Elder Scrolls, Fallout, DOOM, Dishonored, etc (especially any new IPs) are going to be Xbox | PC exclusives.

From a business point of a view, it doesn’t make any sense for Microsoft to release them on PlayStation. Why would they do that? Their goal is clear. They want MORE GamePass subscribers. Many more. By releasing these games on PlayStation they are going to lose big time.

No new GamePass subscriptions, they are going to give Sony a cut from any sales on PS5 and they are not going to get any revenue from hardware sales. Why spend 7.5 billion dollars to give your rival more money? It doesn’t make sense.

I mean its case by case basis. I heard interesting discussion on the videogamer podcast - their view was why wouldn’t xbox start out with the games exclusive and see if it pushes people to the xbox ecosystem - they can always down the line pivot and put them on PS5 or Switch at a later date…

But I think Xbox will use things like Starfield to try and break down Sony’s walled garden - so let Sony have the game IF Xbox gets some Sony exclusives…quid pro quo.

After having read comments on this by several people on several sites, forums etc…

Permanent exclusive when it comes to BGS, Doom, Wolfenstein with the possibility of smaller games to other systems. And TESO and Fallout 76. This shows MS’s full confidence in Game Pass.

Day one for all systems for these games. That way MS still reaps profits from PS copies sold and if people hate spending 80 euros on the games…they might flock to GP.

Release first on Xbox and PC, see how it does, a few months or year later it comes to PS as well.

How would it look like to other Xbox Studios if Bethesda games got special treatment? InXile, Obsidian and Playground (to name a few) are hard at work making big RPGs for Xbox, but the sister studios from Bethesda get special treatment and can release on all platforms? I know they have massive IP, but that treatment would look weird to me.

How would it look like to other Xbox Studios if Bethesda games got special treatment? InXile, Obsidian and Playground (to name a few) are hard at work making big RPGs for Xbox, but the sister studios from Bethesda get special treatment and can release on all platforms? I know they have massive IP, but that treatment would look weird to me.

This is also a good point. Could sew discontent at Double Fine or Ninja Theory or whoever if they can’t release games on PS5.

PlayStation gets Fallout when Xbox gets Uncharted. So, never.