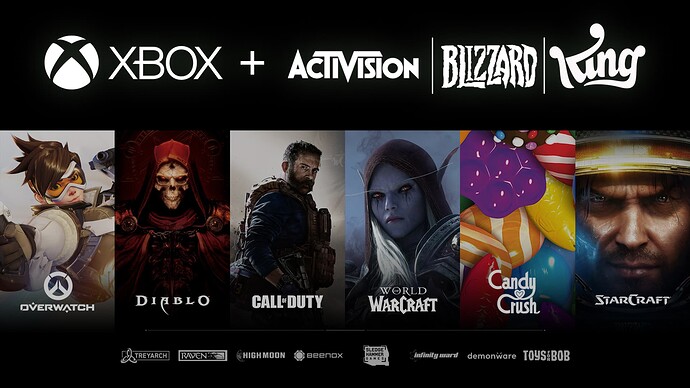 In your opinion, will all future Activision-Blizzard be exclusive to the Xbox platform? All but CoD?

This thread is about to go on

Probably everything except COD.

Yes, you don’t spend 7.5… I mean 70 billion dollars to not have games exclusive.

Every person who said “these IPs make too much money to be exclusive” for Zenimax were 100% wrong; it’ll be interesting to see who wants to die on that hill again.

Activision Blizzard games are enjoyed on a variety of platforms and we plan to continue to support those communities moving forward.

What IPs do they own again?

What IPs do they own again?

Honestly I don’t care. Most of those games are Multiplayer games and to secure a big playerbase you should release it on all platforms. With that being said, and I’m a little petty, I hope they do the same stuff that Sony did. 1 year exclusivity on certain DLCs, weapon loadouts and so on.

My own opinion is that I think all future games, even CoD, will be exclusive. Same thing with Bethesda, support legacy games and communities, everything onward full-on exclusive.

Future COD titles apart from Warzone? I don’t know. Maybe this is the time to transition the franchise away from yearly releases, go all-in on Warzone for the multiplayer aspect and the “main series” releases become something different. We’ll see.

Activision Blizzard games are enjoyed on a variety of platforms and we plan to continue to support those communities moving forward.

I can understand why people would think CoD might stay multiplat

But there would be zero reason for things like Crash, Spyro or Diablo to still release on Playstation

I think Warzone as a platform will remain everywhere but other MAIN CoD’s? idk. Overwatch seems like something that remains multiplatform and I dont think anybody will complain if Blizzard can pump out content for it on a consistent basis unlike how they handled the first game.

The rest will never smell a Playstation.

The biggest question is how will this fix the japanese support tho?

warzone remains multiplat, i think going forward everything else is up in the air.