XboxEra Games of the Generation - Your Results! 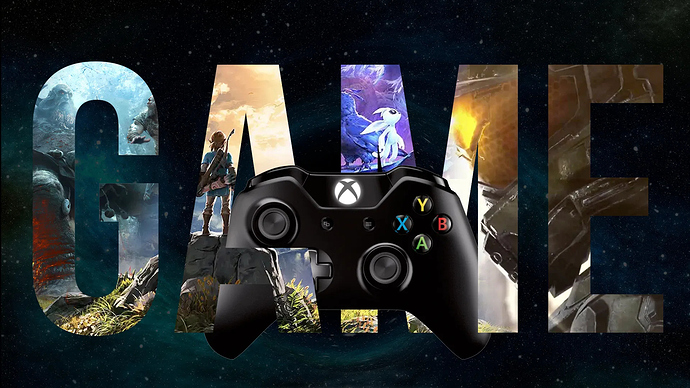 Hello friends, your results were updated and included in an article at the following link.

Xbox Era Fans Voted for the Game of the Generation!

As a new generation begins to rise, let's step back for a brief moment to celebrate seven years of creativity and community by recognizing your favorite games as voted on by the XboxEra community.

Currently these dashboards are built to be viewed on computer rather than mobile. Use all 6 tabs at the top to see different views of the data. One of the tabs includes your own votes and you can see how your favorite games stacked up to everyone else. If anyone here needs help navigating or interacting with them, feel free to ask here.

What are your feelings on the top choices? Any surprises? Would you like to do more of these types of projects in the future?

Great job on this @OneBadMutha

Funny how the XboxEra crowd doesn’t really seem to play the popular online franchises such as Call of Duty, FIFA or even Rocket League.

Thanks for including me in there! Really interesting to see the results, with all the graphs and data.

I can die in peace Sea of Thieves made it

This was very interesting! More, please.

Also, I was quoted! Awesome.

Forza so close to witcher😱

Glad Wolfy got some rep in the runners up for FPS.

Well at least until Forza Horizon 5.

Thanks @OneBadMutha for putting together such a great idea. I can imagine it took a bit of time to collate all the data.

Well at least until Forza Horizon 5.

Thanks for putting together such a great idea. I can imagine it took a bit of time to collate all the data.

Hey friends, thanks for the feedback and participation! Have some other ideas coming up so be on the lookout!

Forza and Witcher ran neck in neck. In fact over the last few ballots, I had to change to Forza 4 winning game of the gen, then back to Witcher 3 (as I was writing while the last votes were still coming in). Few things I found interesting was:

On that note, dashboards were a little rushed. I need to go back and put instructions there. Also there’s opportunities for more insights. For example, as I was typing this, I thought about favorite devs. Playground and Moon won the mindshare there. Two devs we didn’t think about during the 360 era. 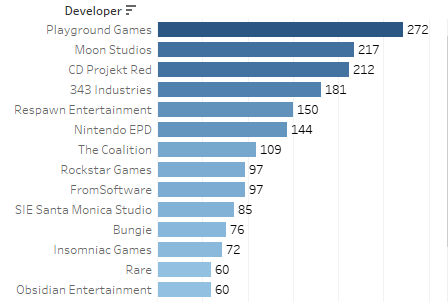 Also now that you’ve all had a little time to read the article, here’s the spoilers. 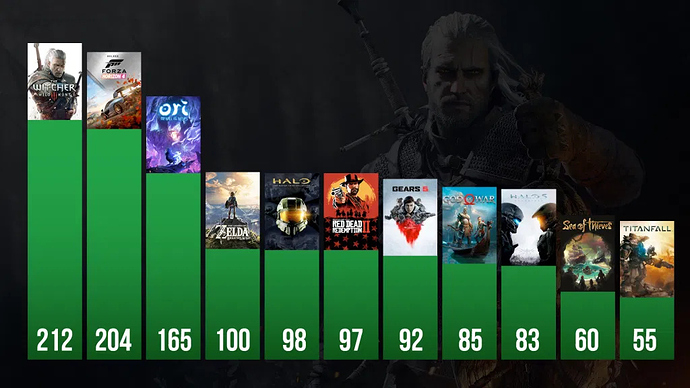 I think you should. This was an interesting article and I would be glad to have one for Game of the Year as well.

And yes please I love those polls!

No, that would be great!

I’d be on board with that, possibly include a category for hidden game pass gems or something similar. Played something indie in PC Game Pass that was hilarious and deserves a vote somewhere. Category for games we played that didn’t live up to our expectations COULD be interesting also.

I jumped into the generation a little late as I tend to do. Got my son and myself the Elite bundle Christmas 2015. The first game I really immersed myself into was probably Alien Isolation, and to me that is still my favorite gaming experience of the generation. I’m sure it helps that I was already an avid fan of the Alien franchise, but that game was incredible to me.

And of course a close second to no one’s surprise I’m sure would the The Witcher 3. Easily one of the greatest games I’ve ever played.