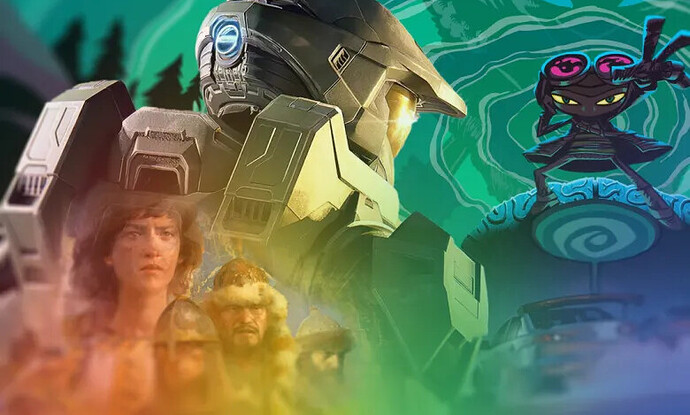 At XboxEra we care about the community. That’s why we’re happy to once again have you vote on your favourite games of 2021 in our XboxEra Community Game of the Year.

Let’s get into it!

My Game of the Year: Little Nightmares II

My Game of the Year is not Halo Infinite. I know, you’re all shocked. You see, while it is most assuredly up there, I usually go with a game that made me feel things, and this year, that has to go to Little Nightmares II. What could have been a run-of-the-mill sequel that tightens some of the loose screws of the first outing instead became a sublime, fresh experience with an ending that had me jumping out of my chair, my face a mixture of shock, awe and anger. It came out so early in the year that sadly it seems to have been forgotten, but the adventures of Mono and Six remain one of the highlights of my gaming year.

My Independent Game of the Year: Artful Escape

It was a close call between this and Death’s Door, but the Artful Escape had me grinning from ear to ear the whole way through. Arguably more an experience than a game, it nonetheless took me on an incredible audio and visual ride, a journey of self discovery across the cosmos. As always, the really good games made me feel different emotions this year, but the journey of Francis Vendetti was full of a range of incredible highlights, and even dredged up feelings of my own childhood dreams of rock’n’roll stardom.

My Game of the Year: Metroid Dread 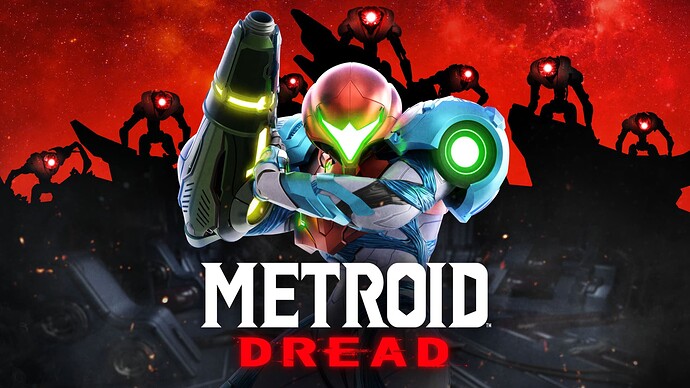 This was a close call but I just had to give the nod to Metroid Dread. As a fan of both the franchise Metroid as well as the genre it helped spawn, Dread was basically everything I could have wanted from a new 2D Metroid game in 2021. It was the first game in a long time that had me thinking about playing it anytime I wasn’t. The sense of discovering something you weren’t meant to is still unrivalled. The visual charm, the boss fights, the upgrades, it’s all just so fantastic. Even the story (something I normally never care about) too had an incredible meta twist that I honestly never expected and it was both hilarious and amazing. People who don’t normally like Metroidvanias or games that don’t hold your hand may not be swayed by Dread, but fans simply shouldn’t skip it. It’s incredible.

My independent Game of the Year: The Artful Escape

Honestly there isn’t a lot that needs to be said about The Artful Escape. So much of its charm lies in its simplicity. It’s quite simply one of the most beautiful and relaxing games I’ve ever played. A charming, interactive coming of age story where you play your guitar across the cosmos to become the rock god you were born to be. I can’t recommend it enough. Be sure to check out the video above.

This one goes without much saying, but a game I gave a 10/10 for the campaign that also happens to have one of my favorite multiplayer offerings ever as well is my top game for 2021. I’ve spent over 100 hours playing it since receiving the review code roughly a month before writing this and it’s still my top choice to play every single time I turn on my console. The story, music, and gameplay are as good as ever but the biggest surprise for me was how hard the script and voice acting hit. Jen Taylor and Steve Downes absolutely nailed it with every single line they delivered.

I might have given The Ascent a higher score, but so much of that came from my incredible co-op experience with my brother, Travis. Death’s Door has stuck in my head longer though, and its soundtrack is truly one of my favorite pieces of music released in a while. It tells a simple but moving story. The combat is both methodical and well balanced. It all serves to add up to a massive surprise hit for me, and I can not wait to see what this incredible two-man studio (with lots of partner help) is working on next.

As someone who’s been part of the Halo community since it became my favorite franchise 20 years ago, I can’t imagine another studio put in a more daunting situation than 343. With a community split between those wanting a game that resembled Bungie’s original trilogy and others wanting a more ambitious re-imagining, I thought 343 threaded a needle here that is a greater accomplishment than its respectable Metacritic score by reuniting a divided base while grappling its way to gameplay mechanics that will feel fresh to newcomers. Infinite takes the things that made Halo beloved and modernized them without losing the identity of the originals. I’ve already put in over 200 hours between two campaign runs and the excellent multiplayer and believe this sandbox, music, and multiplayer balancing are best in class in the industry. With Halo Infinite, 343 has restored the franchise to its healthiest position since Halo 3.

2021 has been a really good year for Independent Games so the fact that this choice came easy speaks to how special I thought Acid Nerve’s first game is. Normally it’s effortless for me to nitpick opportunities or list gameplay aspects I hope a developer can improve upon with a sequel. With Death’s Door, I struggle to recall any glaring issues. An imaginative world, magnificent art, challenging yet fair gameplay, tight controls, and a consistent gameplay experience that found a strong balance between exploration and combat left me wanting to play more games like this after I binged this one.

My Game of the Year: Lost Judgment

As a huge fan of the Yakuza franchise I was quickly hooked into the follow on from the popular title Judgment. The sequel Lost Judgment launched in September of this year and whilst I haven’t quite finished it in entirety (it’s a huge game), I absolutely would say this was my most memorable experience in 2021. Whilst the storyline has mixed criticism, the narrative is dark, gritty and engaging. It achieves this whilst adopting what the Yakuza games are great for, side quests, mini games and more. Lost Judgment is my game of the year for 2021.

My independent Game of the Year: Knockout City

I’ve played so many fantastic indie titles in 2021. Deaths Door, Rustler, The Artful Escape to name a few. Whilst these are all worthy contenders, Knockout City gets my vote. A fun accessible dodgeball game that is super fun and competitive at the same time. I love that the developers decided to bring something unique, vibrant and exciting to the gaming world. On launch it had a surge of engagement and kept players going with its seasonal updates.

My Game of the Year: Forza Horizon 5

I am somewhat surprised that my favourite game this year (and the one I have put the most time into) is Forza Horizon 5. Being a big fan of Forza Horizon 2 I was not overly taken in by the last two titles in the series but this one is amazing. It grabbed me from the superb opening sequence when my cars were dropped out of a plane straight into the different types of racing that the game has to offer and nearly two months on it is still my ‘go to’ game. Mexico has been stunningly recreated in all its picturesque glory and the whole experience runs like a dream on my Xbox Series X. There are a huge amount of fun challenges to be taken on as usual, but this time they are not presented in as overwhelming a manner as they have been in the past. This is the perfect example of what a next generation game can be.

My independent Game of the Year: It Takes Two

Being the resident XboxEra indie game specialist I have played a fair few this year, but the hands down winner for me is It Takes Two. The sheer scope of the project is mind boggling. Name a game type and it has been included somewhere in this tale of an unhappy couple being magically transformed into dolls and having to work together to repair their relationship while surviving the multitude of dangers that surround them. The game swaps genre with little to no warning so the player never knows what to expect next, such as when Cody is flying a plane with May acting as a gunner and suddenly May has to fight a Squirrel on top of the plane Streetfighter style. In a few other examples of the genre shifting that occurs, you work through a top down dungeon crawler, a diablo style section and a chase sequence running towards the camera in full screen while being chased by ferocious Moles. The real achievement here is that although different sections of the game are based on completely different game types they are all perfectly executed. I cannot remember ever playing a game with such a sense of eager anticipation for what is going to come next. For me this is undoubtedly the best two player game of all time.

Considering just how many great indie games release unto gamepass, it was a surprise that my favourite one of the year didn’t. Death’s Door is, quite frankly, a phenomenal game. Even disregarding how small the development team was, the game has top tier level design, tight combat, good visuals and an awesome score. It’s a very rare occurrence for me to get so engrossed into a game that I have trouble putting it down. Usually I try a game for a few hours and switch over, or at the most I complete a game and forget about “100%ing” it. With Death’s Door I started my second playthrough almost instantly after my first. I think this alone shows just how much I enjoyed it.

My Game of the Year: Age of Empires IV

The return of the emperor. Age of Empires IV wasn’t a homerun – or the perfect sequel – but nonetheless an amazing game in this long-running series. It has been the game I’ve spent the most time on, both in singleplayer and multiplayer. Let’s hope Age of Empires IV has a bright future, as I’m certainly not done playing it yet.

My independent Game of the Year: Before We Leave 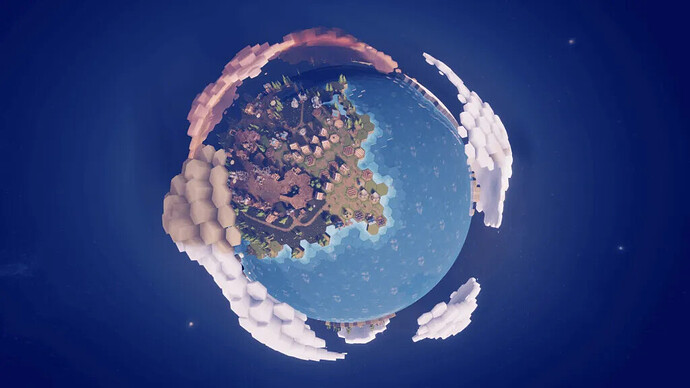 While 2021 didn’t allow me to play as many indie games as I had hoped, I did get to play some amazing games in various genres. First off I’ll mention the games that I enjoyed a lot this year that just fell short from being my pick for independent game of the year. Townscaper is a beautifully crafted project to play when you need to relax from a stressful day at work. It isn’t really a game (but the 1000 gamerscore is an easy get!), but a tool to make art. The other independent games I want to mention are Islanders and Last Stop. It shows what independent games can be and how they can vary in scope.

But, my pick for independent game of the year is Before We Leave. Combine Ubisoft’s Anno games with a tile based puzzle mechanic buildin game and you’ll get Before We Leave. A cute little game that deserved more attention.

You can now vote for the XboxEra Community Game of the Year!

Yes, it’s that time of the year again. You can now vote for the XboxEra Community Game of the Year. Post your list on our forums and we’ll include your vote!

You can participate in our community game of the Year vote right here!

Yeah, sometimes that plugin just doesn’t work as well as it should!