Xbox: It was an honour to be included in one of the biggest game collaborations ever. Thank you Sakurai 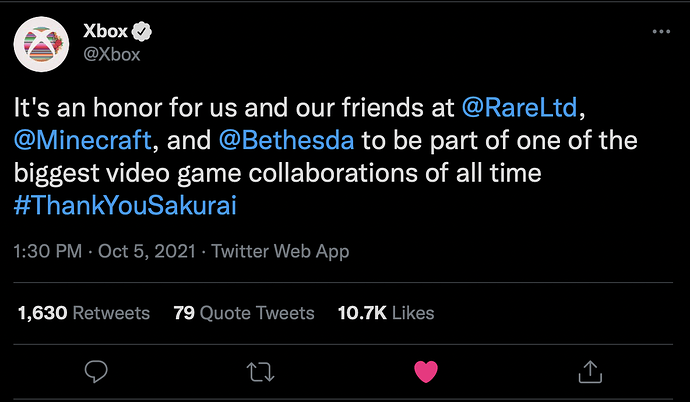 Man, tweets like this really go on to emphasize just how monumentally and staggering of a big achievement Super Smash Bros. Ultimate really was, don’t they? In some way or the other, the game ended up reaching almost all corners of the games industry. Yes, there are many areas where it could have been better, but after 89 characters, it was a hugely expansive effort that is representative of a surprising part of video gaming in one package.

As a collection and a Nintendo celebration package…yeah its the Ultimate of all games. But Smash has literally become for me a Character Hype game with no real added content to the games modes or mechanics. It still has a boring single player and there’s still no Target test in sight. They added home run which was good but its just a game to showoff new ridiculous characters that barely anyone uses.I literally use about 4-5 of the same characters I have been for years a lot of the new ones just aren’t good.

I don’t know, maybe the Melee fanboy inside me is a bit strong but nothing will top that game as far as gameplay.

But hey we got some stuff in there, and Xbox might have the most representation… outside of Nintendo of course.

Banjo and Steve in Smash, Banjo on NSO etc etc.

Doom Slayer was always more likely than Chief, I never understood why anyone bought Chief was gonna happen.

Which Bethesda character is in Smash?

Which Bethesda character is in Smash?

Oh wow, I had no idea that was in the game lol

Oh wow, I had no idea that was in the game lol

It was announced yesterday, still isn’t.

It was announced yesterday, still isn’t.

Ohhh ok thanks for clarifying.

Banjo and Steve in Smash, Banjo on NSO etc etc.

Banjo should have been in ages ago. Steve is sort of pointless.