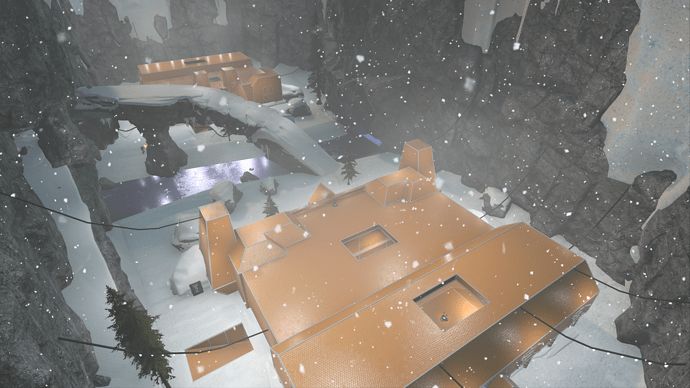 I wanted to work on something quick and small for Christmas and knew I wanted to have decorated houses as the central idea -I know there’s already some well made remakes of Battle Creek floating around but it was too perfect for what I wanted to do. I also considered using one of the other remakes as a starting off point but I figured I would just end up replacing everything anyway so I started completely from scratch. It ended up taking a lot longer than I expected! I would have been tempted to keep tinkering away and adding more detail for another week or two but yeah, Christmas was a pretty hard deadline on this one and I got cocktail sausages to wrap in bacon so I can’t take any more time on it right now.
At the moment it’s suited for FFA modes and 4v4, it’s set up for CTF and Oddball objective modes and bots are mostly functional (it REALLY did not want to work for some reason, I was genuinely on the verge of just uploading without a nav mesh but was finally able to get it working. It’s not perfect but again, I was outta time on this one! I might update it for next year if the nav mesh system is a bit more stable).
2 Likes