Who here has the 1TB Expansion for Xbox Series X|S?

I’ve got it; never had more than 1TB storage before, but 2TB seems like a really comfortable amount where if I ever need to make space, there are obvious games I haven’t touched in a while to delete.

I have it, works great

I’ll get a larger card when they make it, for right now I can manage fine with the internal + external card and then a 5TB external USB drive for BC and Xbox One games

Best money I’ve spent very recently. It was expensive to be sure, but in the long run it was SO worth it.

I mean with MLB The Show 21 on Series X being 72 GIGS, Outriders Series X being 50 gigs, other games like Valhalla ballooning up, Watch_Dogs Legions being 30, Halo MCC being 100 GIGS, Gears 5 beings massive, it’s just worth it.

I keep mine organized in a weird way though. Most of the 1st Party Microsoft stuff I keep on the Internal SSD because I know it’s never leaving, so it’s safe to keep it there, along with the physical Series X games I own (Y: LaD, Watch_Dogs). The smaller GamePass stuff that’s under several gigs I also keep on the Internal because they’re so small (Tetris, The Touryst). Most of the other Series X / Series X GamePass games I keep on the Storage Card because they could came and go, and it’s useful to know where each of those GamePass titles are.

The only Series X game I own digitally that’s not on the Internal is COD: BO CW because it’s fucking Call of Duty and it’s fucking gigantic WTF Activision.

I have one and honestly I’m so happy I bought it. I have a bunch of 3rd party games on it.

And it has been explained that this is the cost of going with SSDs that can be guaranteed to run at a certain speed, there isn’t much that can be done about it yet, but prices for storage are coming down so it won’t always be this expensive.

In the meantime Microsoft has given you the option of cold storing your games onto a mechanical hard drive if you are not happy spending the amount of money on a 1tb hard drive - I am waiting for 2tb cards to become available because I also feel it is too much for 1tb. It is not ideal but it is a temporary stop gap.

Yea MS gave alot of great options right from launch for storage and also the internal drive has more storage then the PS5 by default.

Prices will come down on the expansion cards and when they introduce a 2TB card that costs the same as the 1TB card right now I’ll get it.

Yeah but that’s a lot to pay for storage. I’m hoping by the end of the gen they’re cheaper

You only buy if you need to buy. And if the price is too steep, then we have the option of clearing out old games onto a regular HD.

Don’t really see the need with cold storage being able to hold SX games. And when you can just queue up something to be transferred and play other stuff.

I’d rather buy an even larger external SSD and have everything there.

I got it on sale because my SX SSD was close to full and frankly I don’t have time for longer loads. Funnily enough since buying it I haven’t actually needed it yet but guess I will soon. Gamepass really is the culprit.

I do since launch and it’s been great

I mean you either pay that or you’re stuck with it. Ipbone memory cannot be upgraded. On series x you can wait for cheaper options in the future. I’m just saying if I’m gonna spend that much I’d rather go all in. I know for a fact if I buy the 1tb I’ll end up buying a future card as well. If I buy a 2tb. That’s it. I’m done for the generation

I get that it’s not an attractive option for everybody and that some will want to wait for larger expansions as price drops, but, current Xbox is all about giving people choices. They had two options here wait until 2tb is financially viable to release an expansion meaning there was no way to expand storage usable for series games or release a 1tb for those that want it now. A good move from my perspective as I have one and am using it. 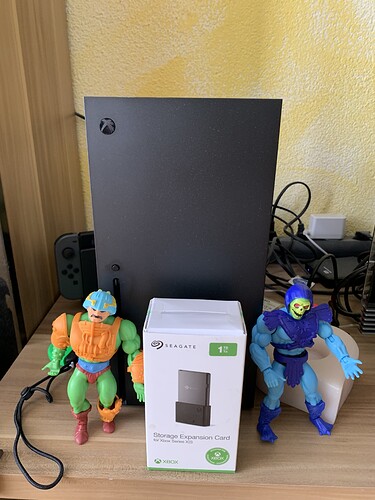 Target had a deal for 10% off a gaming accessory, along with the 5% for using their credit card so I splurged. Really glad I did, nice to have the extra space to work with, and it works well. I may consider a larger one at some point, or one of the other solutions they hinted at, but I’m enjoying the space. I don’t play one game at a time but bounce between several, and try Game Pass stuff as well so it’s handy.

I do and its the easiest decision I have made.

same here. it’s been worth every penny. will still probably end up buying a USB SSD for X1 games as more series games come out

Im making do with the internal on the seriesX, fits around 20 games, so its fine. Will get the seagate ssd pack when its £100.

I bought one recently and I’m quite pleased with it. I love having a very compact storage device, with no cables or wires, and of course not having to worry about what games are stored where.

I also recently bought a Series S for another room in my house, so the 1TB card makes it so easy to move games from one machine to the other.

I feel the same way. I’ll pay more for a larger capacity drive than the 1tb available now. I’ll wait until they get around to 4tb.

I got one day one. Really glad I did. I have lots of games ready to play and never have to worry about space.

Moving games from the internal drive and visa versa is also lightning fast so it is a joy to watch.

me. works as expected. no issues. this normally the best you can say about storage.