Ubisoft says they are moving away from AAA games starting 2022. Which franchises will disappear and which turn more into AA, Live service, or mobile? 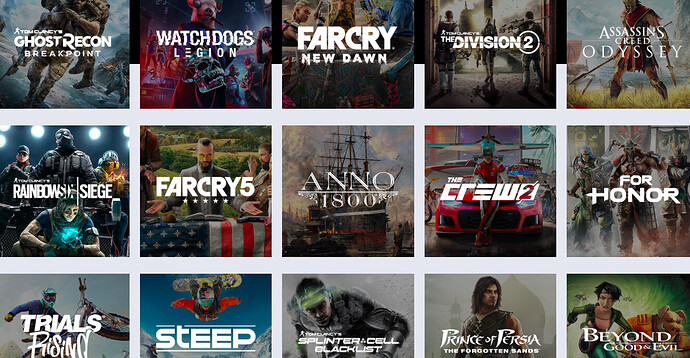 In the recent earnings call Ubisoft said they would be moving away from relying on AAA games and move more towards live service and mobile. Which franchise to you think will change/disappear or stay the same. I think Assassins Creed will stay the same, its there most successful franchise and is in my opinion what’s kept them afloat. Maybe Far Cry cause they seem to perform pretty well and Just Dance. I could see For Honor and the division relaunching as free to play games if at all. I’m curious what they will decide to do with “Beyond Good and Evil 2” and “Skull and Bones” since they don’t seem close and seem have had a large amount of investment in them already.

I think that’s more like reducing the number of AAA releases per year than moving away from AAA.

Like, instead of releasing one AC every year they center about an AC for the next X years that receives regular content.

Honestly only Division and For Honor are the candidates for f2p. The rest of their games sell like 7-10 million range so those arent going anywhere.

I dont think Beyond Good and Evil 2 is coming out any time soon and I dont think anybody beyond a handful of people really care same with skulls and bones.

I honestly don’t think I could continue playing Ubisoft games if they all become like Valhalla.

I love Ghost Recon Wildlands, but that was another game with too much ass content that I eventually stopped playing. Valhalla is becoming the same. IT’S JUST TOO MUCH GAME.

Ubisoft, you can’t keep releasing games like Valhalla because I’ll never finish them.

They say they are moving away from relying of AAA games. So they still will have AAA games but as they mention how they rely on the realease of 3-4 AAA games a year for financial success, they are in going to diversity to include more F2P games in there development plans and mobile games.

Apparently mobile games make up almost 10% of there revenue comes from mobile… and I dont even know what they do on mobile.

Didn’t Ubi call most of their games GaaS a while ago? I remember the outrage on RE when that happened. Ubi sure did call AC Oddysey a live service game.

When Ubi talks about their games being “live service” they’re referring to stuff like Reda’s shop in Assassin’s Creed Valhalla, which is otherwise a 100% offline single-player game. I don’t think we need to worry about Assassin’s Creed, Far Cry, or Watch Dogs becoming F2P multiplayer titles or whatever people are worried about. They seem to be doing just fine with the current formula.

IT’S JUST TOO MUCH GAME.

Its JUST TOO MUCH bloated uninteresting content. I will continue to stand that no assassins creed game should take over 35-40 hours (still long but this is Origins like length) to beat the main story.

I thought after the change of leadership recently they’d actually explore more creative avenues like they used to with Child of Light, Rayman, Valiant Heart, so on. Hopefully they aren’t sleeping on Immortals Fenyx Rising success either. We want less of these live service type games, not more. We want less of these bloated big budget AAA, more AA projects that aren’t all open world with lite rpg and Stealth mechanics cuz I’m getting tired of them. It’s like superhero fatigue. Bring what Wandavision did to marvel, not another fucking tiresome big blockbuster.

Hopefully they aren’t sleeping on Immortals Fenyx Rising success either.

Thing is this is just a the Assassins Creed template with a different art style. I honestly cant force myself into other type of Ubisoft games like this.

Im surprised I did enjoy Legions because surprisingly its not 80 hours.

Thing is this is just a the Assassins Creed template with a different art style. I honestly cant force myself into other type of Ubisoft games like this.

Im surprised I did enjoy Legions because surprisingly its not 80 hours.

I was referring to Immortals in more of a sense of something that is tonally fresh from Ubisoft and is not going for being the biggest budget cutting edge most expansive open world game out there. But definitely, it’s still a Ubisoft game haha.

Rainbow Six Siege will probably be free to play, at least a version with some of the operators, with others pay to own.

I mean, live service games are as AAA as a game can be. I guess what they mean is that they are moving away from those cinematographic, single-player games.

Even Ubisoft single-player games have microtransactions now, like Assassin’s Creed and Immortals.

Probably meaning that for a game like Division, Siege or For Honor its better to do f2p with good monetization.

Awesome news for me…Ubisoft will still release AAA games but instead of just being a one and done or wrapped up in a six month span, they will support these games with new content for a few years until the next new game in the series is ready.

Absolutely loved Immortals Fenyx Rising and hoping it becomes a franchise as it’s the BOTW killer for me. Currently replaying The Division 2 on Series X and two years later, I still love this game. Far Cry 6 should be great as the voiced protagonist thankfully returns with a great antagonist in Giancarlo Esposito. As long as they eliminate the RPG shit from New Dawn, this game will be on par with Far Cry 3 and 4. Assassin’s Creed will stay as is but most likely have more expansions.

As for the live service aspects, most games are that already and I would much rather keep playing a game I love and enjoy for a longer period of time instead of having to find another game to play if I don’t have anything else that I actually 100% want to play.

This is what I would do if I were Ubisoft, they need a long-term strategy:

4 - Make AAA games like Assassin’s Creed and Watch Dogs much shorter and with less content and bloat, save money that way.

5 - Reboot Watch Dogs with a focus on narrative and simulation (like GTA), and with a preset character, call the new game simply Watch Dogs: Random Subtitle.

7 - Cancel Skull and Bones, that genre is completely dominated by Sea of Thieves and that game will flop.

8 - Cancel Rainbow Six Quarantine and simply add all that content to Siege. Siege could become the next CSGO but it needs to become a long-term platform, all resources need to go to making new content for it. They should not split their time, employees, studios and resources into two games that are so similar, it’s dumb. Quarantine could actually slow down Siege’s growth.

10 - Launch Ubisoft+ on consoles and make a new lower tier service called Ubisoft+ Lite or Ubisoft+ Mini - which only includes games that are +2 years old, something similar to EA Play’s vault, no new games at launch - that is included with Xbox Game Pass Ultimate or maybe even a new Game Pass tier that is more expensive that Ultimate - like 20 or 25 dollars a month - and includes both that service and EA Play.

12 - Have more time between your games, it’s dumb to launch Watch Dogs Legion, Immortals and Valhalla in the spam of around only 15 days. Those three games are similar and appeal to the same people - fans of open world games - , they won’t have time and money to get all those three games in such a short amount of time and they will buy only one (which is why Valhalla is being very succesful while Immortals and Legion both underperformed). Don’t have a new IP like Immortals launch in December. Watch Dogs Legion should have launched in March of 2021. Immortals should have launched in April of 2021.

Similar to how Activision and their three COD studios operate. Don’t make people tired of your big AAA games.

17 - Have the people and the studios that were working on Hyper Scape, Skull and Bones, The Crew and other stuff - that I would cancel, as I said - develop smaller and cheaper AA games with AAA production values, games with a narrative focus that are 10 or 12 hours long and don’t have any bloat. Take a note or two from games like A Plague Tale: Innocence and make new AA/AAA IPs similar to something like that in terms of scope. Those games are cheaper to make than stuff like AC or FC.

18 - Riders Republic has potential but it’ll flop like Steep if it costs 70 dollars, sell it for 40 dollars. It’s a new IP that doesn’t have an established community and it’s an extreme sports game, you can’t have high expecatations for it at a 70 dollar pricepoint. Make sure it launches on Switch on day one. Launch it in early September - before FIFA comes out - or late August of 2021.

19 - Make a full remake of the fist Far Cry game, like the Resident Evil remakes Capcom is making now. Make full remakes of older games like the old 3D Rayman games - they could make a remake collection of the original trilogy like Activision did with Crash N’Sane Trilogy - , old Prince of Persia games, etc.

20 - Change the logo of the company- yes, I know they changed it in 2017 - to reflect their new business philosophy and their new way of making games.

Ubisoft is getting stale and they need to take advantage of platforms and services they don’t fully support yet - Steam, Switch, Game Pass - . They also need to make new kinds of games - AAA games with less bloat and less content, smaller and shorter AA games with AAA production values, F2P games, remakes, Switch ports - while they should also drop games that are clearly going to flop like Hyper Scape.

7 - Cancel Skull and Bones, that genre is completely dominated by Sea of Thieves and that game will flop.

Nah, redo it into a AAA Singleplayer storydriven pirate game. I would be all over that!