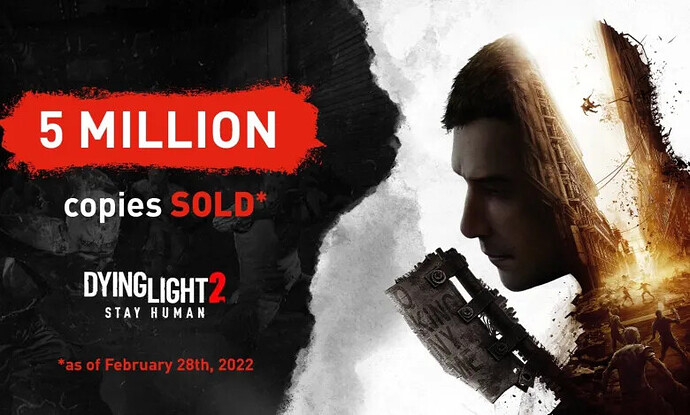 The critically acclaimed, and genre-defining flagship game from Techland, Dying Light 2 has had a hugely successful start. As of February 28th 2022, they have announced that five million copies have been sold across all platforms and the numbers are significantly growing every month. The other milestone Techland is celebrating is 20 million copies of the original Dying Light in lifetime sales. The CEO of Techland had the following to say:

“The success of the Dying Light franchise is a great example of the unforgettable experiences we create for our players.”
– Paweł Marchewka, Techland’s CEO

Absolutely love Dying Light 2!! Best freaking melee combat I have ever played in a first person game. Such an excellent freaking game!! Looking forward to their expansion in June!!

I’m confused, why are they announcing a number that’s 6 weeks old. Is that normal?

I’m confused, why are they announcing a number that’s 6 weeks old. Is that normal?

Most likely had to verify the numbers.