By my fuzzy math, Warhammer 40.000: Shootas, Blood, & Teef is the 300th Warhammer game to release this year. It’s a 2D co-op-focused shooter featuring a fun, albeit brief campaign, a handful of competitive multiplayer modes, and a sense of over-the-top chaos that I couldn’t help but smile at. 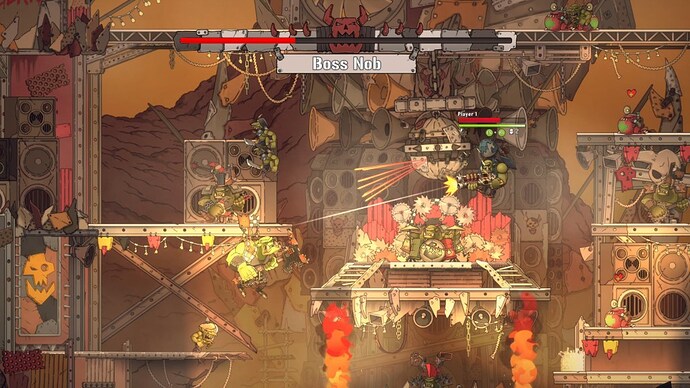 Story-wise the campaign begins with a quick cutscene full of shooting, yelling, betrayal, and it’s all very silly. The game has a light-hearted tone, which is matched by its basic but clean graphics, and excellent heavy metal soundtrack. Either alone or with up to four players total you will take on all manner of enemies pulled from the Warhammer 40,000 universe. As a big, dumb, angry Ork you’ll fight rats, men, orks, tanks, sewer monsters, and more across a campaign that took me roughly four hours to clear. It was good, quick fun and I could see coming back to it at least a few times in co-op but it is very short.

A lot of the replay value will come in grinding out the Teef currency you can find in missions to unlock different weapon variants as well as outfit pieces for your character in the Mek Shop. This can be accessed at any checkpoint in the game or from the main menu. Weapon-wise you have a pistol, shotgun, machine gun, flamethrower, and missile launcher which you quickly unlock throughout the first few levels. Each of these weapons has multiple variants normally focused on fire or electrically charged shots. Unlocking most of the guns is easy in a single playthrough. For the various cosmetics though, there are so many that it may pull you back in if you’re the type that loves unlocking everything in a game before putting it down.

Once you’ve completed the campaign there are a few PVP modes on offer. As I only had a single review code I wasn’t able to test them out that well, but fighting myself while using two controllers it seemed like a decent distraction. It’s not the next Towerfall but it feels like more than just a last-second value add-in. There is both local and online for the PVP as well. 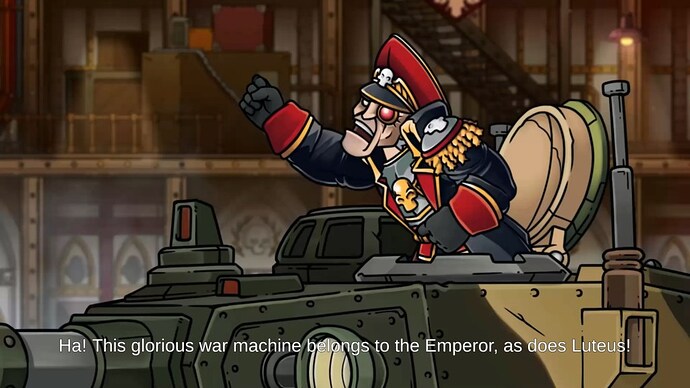 The controls in the game feel pretty good in every department except for fine aiming. The left trigger is your jump button, with a double jump available by default. The right trigger is for firing your weapon, while the Right Bumper is your melee attack. Melee attacks vary per class, which I’ll hit up in a bit. Left Bumper is to use your currently equipped grenade, while Y opens up your Weapon Wheel when held and is a quick swap for weaponry when tapped. X reloads, A interacts with the environment, and both sticks being pushed in at the same time actives your “WAAAGH!”. The WAAAGH is your super meter, tied to hitting enemies with shots (which you control by aiming with the Right Stick). Depending on the weapon equipped you’ll get a few seconds of non-stop high damage output which can help you tear through the tougher crowds of enemies quickly. The class system is pretty basic with archetypes built around their unique melee and grenade attacks. You have your spell caster, big brute, and so on.

The game controls well on the whole, with movement feeling great. My only issue is that fine aiming at enemies in the distance with weapons like your rocket launcher can be massively frustrating. There seems to be an odd acceleration on the right stick and even with a mouse aiming didn’t feel great. It wasn’t bad enough to be a deal breaker, but it did lead to frustration in bigger fights. Most levels are capped off with a boss fight, and you’ll take on Tanks, Mutants, very large humans, and more. Most felt well-balanced though the last few kicked my ass pretty hard on Normal difficulty while playing solo. If you die you go back to your most recent checkpoint, and you’ll come across those often.

Graphically I think the game looks great. It’s not pushing any technical limits but it’s well-drawn, and the animations are smooth. I did review this on PC for the most part, and it ran at an average of over 200fps on my rig. I did have a few crashes when tabbing out and back in though. It’s the type of game people look at and say “that looks like a flash game” because they don’t remember how stiff and awkward-looking flash games were. It’s not Gears 5, but I dug the art style.

One of the best parts of the game is the music. Heavy Metal riffs, and even a decent vocal track during one boss fight, will power you through each level. It fits perfectly with the game’s never-serious voicework which is full of war cries and big British accents yelling about revenge and their lust for Teef. The sound effects are decent though things sounded muffled during certain larger fights in my headphones. 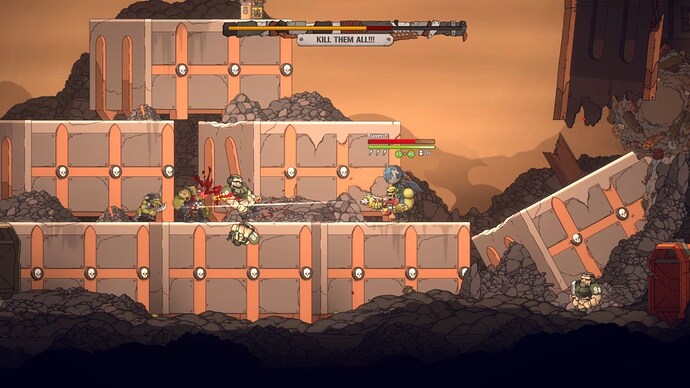 Warhammer 40,000: Shootas, Blood, & Teef is a hilarious, fun, and joyous game. It knows what it is, and it leans heavily into being dumb and fun. The soundtrack kicks serious ass, and I have no clue exactly how much it will cost as the store page isn’t live on Xbox and you can only Wish List it on Steam. If this one is $20 or so then I say go for it, especially if you can play co-op. WAAAGH!

Thanks for the review.

I hadn’t heard of this game until now. I wasn’t expecting this to be a 2D side-shooter going strictly off the Warhammer 40K name. It looks interesting to be on my list of should play, though as you said in the review it will depend a bit on the price as to when I pick it up.