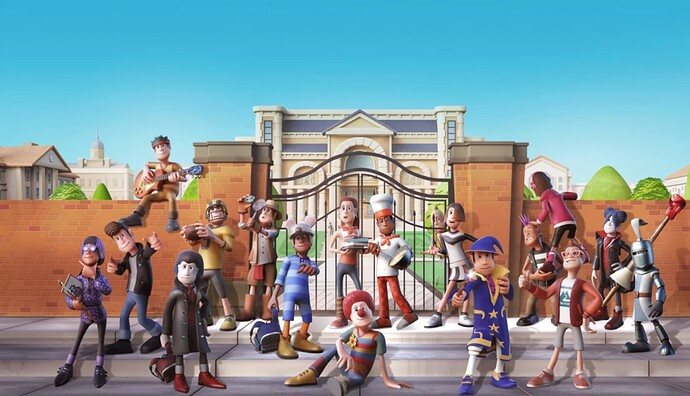 Do you remember attending college? I do. And while my time there was filled with memorable and odd moments, it doesn’t compare to what I just experienced at the many universities I’ve built in Two Point Campus. Not in the slightest.

Two Point Campus is a simulation and building game by Sega’s Two Point Studios. Born from developers who worked at Lionhead Studios (of Fable fame) and Bullfrog, this game and the previous title from the studio – Two Point Hospital – just breathe Theme Hospital. But this time we’re not building a hospital. No, we’re building a University.

The universities we’re building in Two Point Campus contain – but aren’t limited to – a clown school, a culinary school, a magic school (Yay, Harry Potter), and a school where we’re training students to become knights. So they can fend off knights from rival universities. 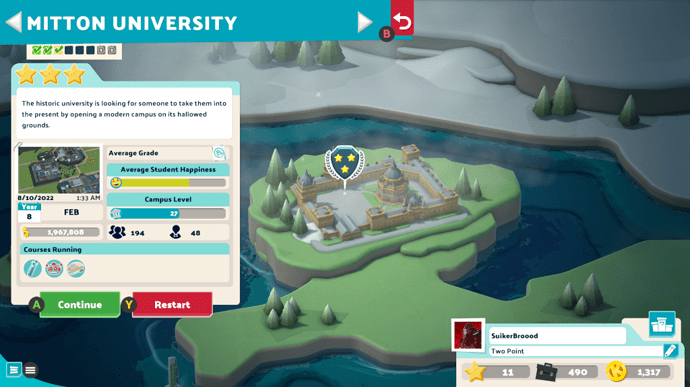 Compared to Two Point Hospital building in this game is more advanced. The developers have given the player more freedom to change the layout and size of the buildings. Additionally, the space outside is used a lot more too. While in a hospital basically, everything of note is happening inside a building, on a university campus the grounds between buildings can be just – or in some cases even more – exciting than the inside of the buildings themselves. For example, when building a university where you’re training knights the parks in front of the university building become a jousting field or a training ground. And that’s not all. You can also use the space in between buildings to create a festival-esque atmosphere, with food stands and outdoor activities.

In terms of creating classrooms, dormitories, bathrooms, and the university library the system is similar to Two Point Hospital. A room has a minimum size which is required, but other than that you are free to create a room as big as you like. It sometimes pays off to be a little more gracious with plotting out your university, as you’ll notice rooms will require a lot of additional furniture down the road.

We want our universities to be as efficient as possible. So it’s wise to group certain types of classrooms together and have certain rooms appear in every building (such as dormitories, libraries, showers, and bathrooms) so students won’t have to cross the entire building to find a book or to take a shower. You can even adjust the schedules of your students to make them more efficient. Don’t want clown lessons in certain lecture theatres, but instead want a culinary lesson in there? Swap those around so your university becomes more efficient. I didn’t bother much with this, as I was too busy expanding my university and fulfilling all the needs of my students and staff. 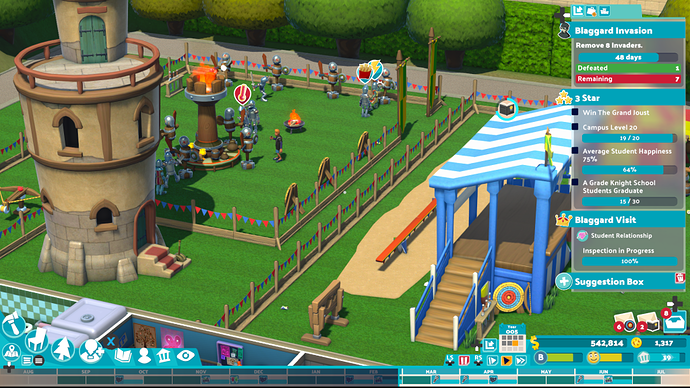 Students like love benches more than books.. at times

Students are needy. Very needy. They don’t just require drinks, food, a bed, and a toilet. No, they require all kinds of things. From clubs to join, to a student union building, from love benches to specialized learning equipment. This means you are constantly balancing your income and other points that you’ll accumulate with progressing your university in terms of expanding with new buildings and rooms.

Clubs for example. At some point, your students will want to join a club. There are clubs for speed walkers, which make your students travel faster. Or a club for power-napping, which gives students more energy. But these clubs need their items which have to be dotted around campus.

The end goal for every university you create is to get three stars. You can continue playing with the universities after you’ve gained three stars, but by obtaining those three stars you’ve completed a level. For players with less patience, it’s possible to continue to the next university, as you’ll unlock those with one or two stars. Which makes the game more accessible. Players who want the extra challenge can play till they get their university to three stars. But if you just want to know what the next university will be, then it’s fine to quit working at a certain university after having obtained one or two stars. 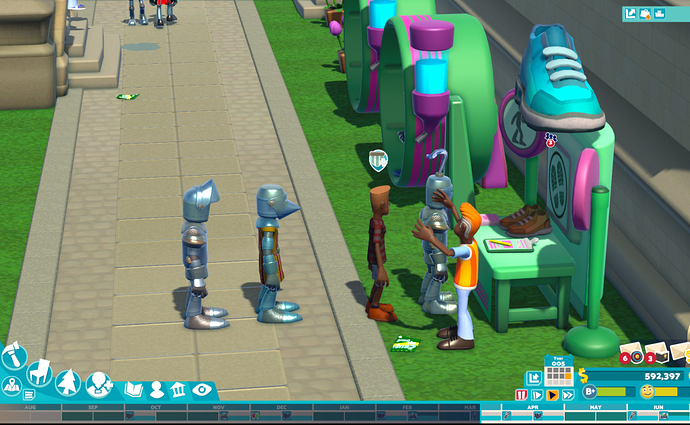 At the end of the day, the key to success is having happy students. Achieving this in a smaller university isn’t the hardest task you’ll get to do in a video game. But, having to juggle the needs of hundreds of students is hard work. After all, this isn’t just a building game with fantastic (and corny) humour. It’s also a simulator. Making your university as efficient as possible is part of the charm.

What made me as a player happy was the combination of aspects within the game. The relaxing sim-type music, the quirky but very effective art style, and the outstanding (British) humour. The announcer uses the university speaker for quotes such as ”Teachers are reminded dogs do not eat homework” or ”Friendly reminder, I am not your mum” is what makes or breaks this game. The developers know what they’re going for and they’re exceeding their goals. And it makes me wonder how far they can take this franchise. I hope we’ll find out in the future.

Overall Two Point Campus is an improvement over Two Point Hospital. For some people creating a hospital where patients are treated for a wide variety of strange diseases will be more enticing, but Two Point Studios has done a very good job at blending the humour of the previous game with the atmosphere of a university campus. The result is a great simulation game that builds and improves on the strength of the previous title. And by doing so it has nestled itself at the top of the genre.

Completely forgot to post this one on the forums. We published this review 4 days ago

Completely forgot to post this one on the forums. We published this review 4 days ago

I had missed it, haha. Good review!

I would have been more interested in it if it was a more realistic sim, that could actually have been fun. I don’t care much for the silliness tbh.

Finding Year 2 to be the trickiest part! Like, year 1 is fine, but finding the cash to fund the upgrades to go to Year 2 can be a pain. After that the place is making cash hand over fist. Funny little difficulty blip