Tribes of Midgard hit Playstation and PC in 2021. It’s a big co-op-focused Viking sandbox that is launching into Xbox at the start of its third season of new content. Your mighty immortal character will chop down trees, pickaxe rocks, and slay creatures of legend in an up to 10-player co-op title that has grown a lot since it first launched. Let’s get into it. 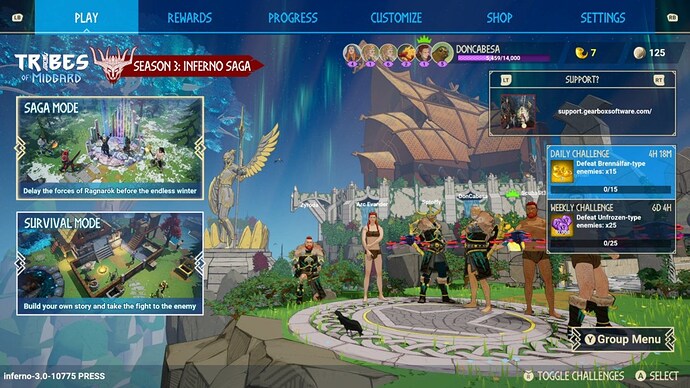 Survival of the Fittest

The premise for the game is simple. You are sent down from Asgard to protect Midgard, aka Earth, from the denizens of Hel. Two modes are on offer the first of which is the Sagas. This has been the main mode of the game since its launch and is the big focus on the marketing for Season 3 and the game’s launch on the Xbox platform. Sagas have you protecting part of the World Tree which resides in a town. Multiple NPCs are there to help you craft items for gathering resources, forge weapons and armor for fighting, and gain potions or food to replenish your health.

The main goal of a Saga is to defeat the world boss and there are three available now. You can choose to go after one, two, or all three now if you’re feeling up for it though I’d recommend only pushing that if you have a big group of friends to help with. Cooperative play is the main focus of the game, especially in Saga mode. I was lucky enough to get to play with 6 of the dev and pr members working on the game as we worked our way through the brand-new Saga. Each new run starts at the same point in a procedurally generated world. You’ll begin by finding sticks and flint to craft your first axe and pickaxe. After getting enough wood, stone, gems, and minerals of various qualities you can use those resources to upgrade your vendors and craft more and more powerful gear.

In the town is a community chest, something recently added to the game, that lets you combine all of your player’s resources into one big pile. While the game does offer up matchmaking, I would say focus on finding a friend group of at least three or four people for this one if you plan on getting it as you want to play with people you can trust. It makes things a heck of a lot easier and less frustrating. The resource gathering aspect is helped by the fact that every node only takes one hit to gather, no matter the size. Your initial saga runs will be learning experiences where you figure out the most optimal routes and strategies as you attempt to defend your city from the nightly enemy raids while gaining more and more power so that you can take down the various camps and targets that litter the very large map. 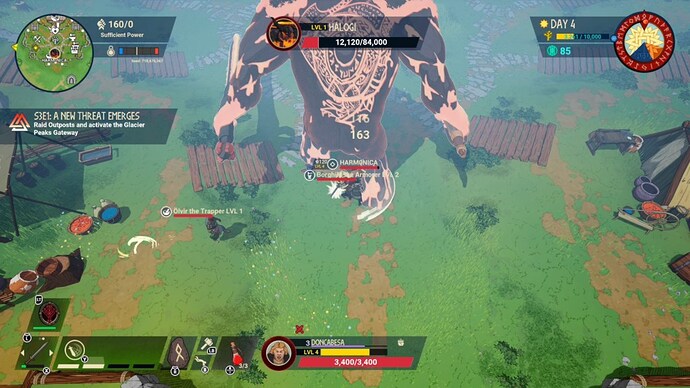 In the Saga mode, there are multiple unlockable class archetypes, though you’ll start with only the Ranger and Warrior available. The Ranger is both safer to play as and more challenging due to its higher skill ceiling. The Warrior is exactly what you’d think and was my choice as I just like smashing things. Controls are fairly simple with X being your main attack, B being a dodge with a short cooldown, Y, Right Trigger, and Right Bumper being your various mana-using abilities, and A being your interact button. The D-pad is used to go through your potions/consumables, and the left trigger is for locking on to enemies and using your shield.

Controls work well, though the combat can feel a bit loose at times. With this being a light-MMO feeling game focused on co-op though I get it. When 10 people are all hitting the same mob it wouldn’t make much sense if they could constantly stun-lock it. Health is a constant worry as you can only carry a limited number of potions and food consumables, but a trip back next to the piece of the World Tree in the middle will heal you whenever it pulses. Clicking in the right stick is your runestone which transports you back to the base where you can grab various per-person quests which reward you with rare resource items. There is a lot of focus on resource gathering both from the land and enemies as you defeat them. Chests are everywhere and as long as you’re close to them when they’re opened everyone gets a shower of loot out of each one. The later game builds can focus on different elements which are stronger/weaker against certain foes so it’s worth having a few built up per run once you know what you’re doing. 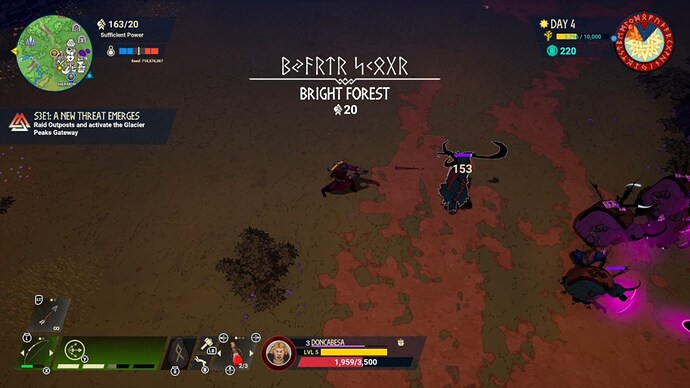 The other mode, and my personal favorite for solo play, is Survival. This is a new take on the previous Survival mode that was in the game. Instead of being a variant of the saga mode where you are still focused on protecting a town you now find yourself in something not timed and that can’t really end. Instead of NPCs, you use the Allforge to create various crafting stations that you slowly empower up to unlock more and more items. I can see myself playing this mode of the game a lot more than the Sagas because I hate timers and being rushed, and the new Survival mode is a far more relaxed of an experience.

It can be played solo or alone and you can allow matchmaking if you want, though that opens up the possibility that people come in and destroy all the various stations and full buildings that you can create. I didn’t have enough time to unlock most of the blueprints during this review phase but the options here seem quite large for the base building side of survival and it works well enough on a controller. The main focus on Survival is to, much like the Saga mode, build yourself up strength-wise enough so that you can go and slay a selection of bosses. The key difference is you don’t have to worry about defending a town and losing if the tree within is destroyed.

For most people who are interested in this game but might not have a big group of friends to play with (and don’t like the thought of matchmaking) this mode is a huge selling point for me. I had a lot of fun in the Saga with the dev team, but I doubt I’ll have a big friends group to play with once the game launches in full so having this survival mode will keep the game installed and played frequently on my Series X. 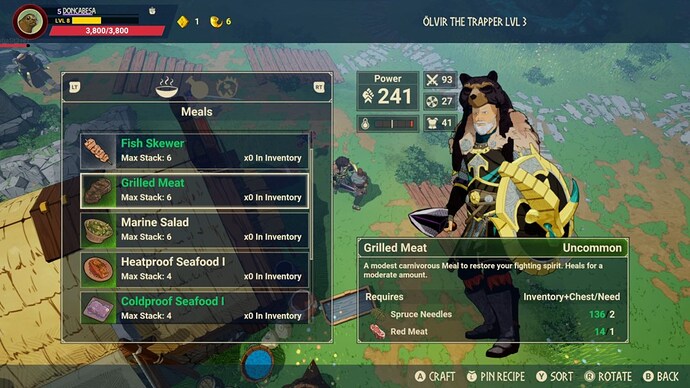 Graphically the game uses a cel-shaded look that holds up well. It ran at a steady 60 frames-per-second and the resolution was high enough to keep things clean looking. It’s not a great-looking title but some of the enemy designs for the frost giants and Saga bosses looked fantastic. The music fits the Viking theme appropriately enough and the sound effects did their job without getting the way at all. I did run into a lot of bugs but I was on a special build of the game made only for the press. We’ve been assured by the dev team that the launch build will have had a couple of months of extra work put into it so the minor bugs such as being unable to move without dodging have been fixed.

The metagame outside of each run is tied to a battle pass style progression system. You’ll have challenges along with in-game drops that net you season experience. As you level up through the season you’ll get a mix of starter kits, cosmetics, and social interaction unlocks. There does appear to be a real money cosmetic-only shop for some of the crazier looks in the game, but it wasn’t turned on in the press build so I’m unsure of the pricing.

The only game-affecting items were the starter kits which can let you have low-level armor and weapons to start a saga or a couple of useful runes. They were easy to get and added a small amount of convenience. There was no “pay to win” behind any of it, and it felt more like an RPG leveling mechanic than any type of microtransaction. 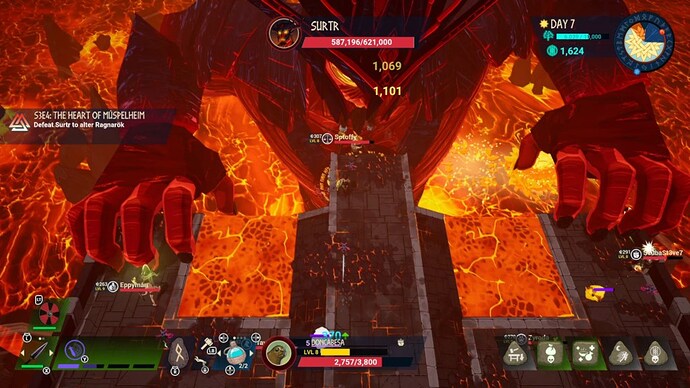 Tribes of Midgard is a large number of simple systems that work well with their co-op focus. The new survival mode makes solo play a Hel of a lot more appealing, as well. Retailing for a very reasonable $20 US this one is worth checking out if you have a group of friends interested in it.