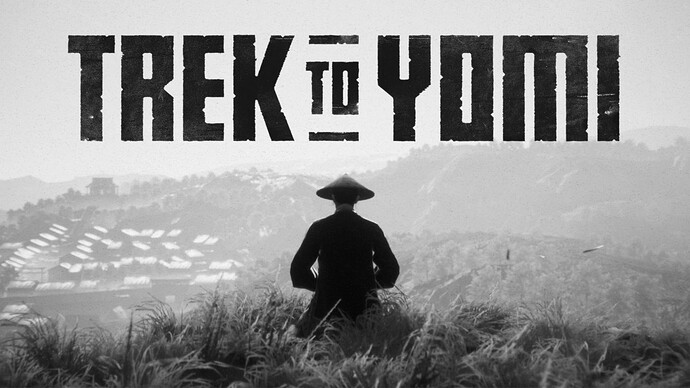 Akira Kurosawa was a legend in Japanese cinema.  His Samurai films of the 1950s and 60s have had a massive influence on western cinema ever since.  ‘Star Wars’ for example was heavily influenced by ‘The Hidden Fortress’, ‘Yojimbo’ was remade as ‘A Fistful of Dollars’, and ‘Seven Samurai’ was adapted to become classic western ‘The Magnificent Seven’.  I have always wanted to play a Samurai game inspired by those stylistic greats and now I can, thanks to Polish developer Flying Wild Hog.  Join me as I attempt to Kill bad people skilfully, with nothing but a pure heart, honour, and a very sharp Katana, in the Xbox Era review of ‘Trek To Yomi’. 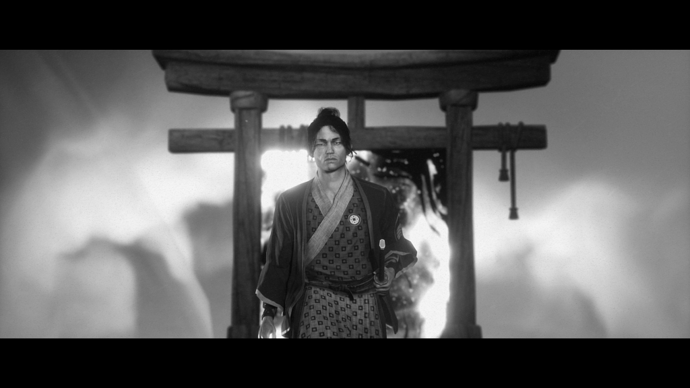 After beginning the game as a trainee Samurai and learning some basic combat, I soon disobeyed direct instructions from my mentor and left the dōjō during a bandit attack.  Things looked like they were going well initially but after testing my swordsmanship skills a few times, I could do nothing but watch while my master died in the act of saving me from the bandit leader.   Many years later (as a grown man) bandits were again on the loose and I was required to set out with the other local men to protect not only my village but also the love of my life.  Let’s just say that from that point onwards things did not work out quite as planned.

The visual design of this game cannot be praised enough.  Looking like something straight out of a black and white Kurosawa classic, the visual design wears its heart on its sleeve and mimics filthy celluloid film at certain times, while the limits of combat arenas are designated by what looks like the vertical border of a film strip.  No attempt is made whatsoever to hide where the game’s main influences are coming from.  Dust motes drift down through rays of sunlight in a dark forest, fire crackles menacingly from Torii gates set intentionally ablaze, and intricately constructed buildings of various types bring Edo period Japan to life.  Cut-scene facial close-ups are not quite as impressive as the environmental design but are still good and remind me of the Swiss horror game ‘Mundaun’ from last year. 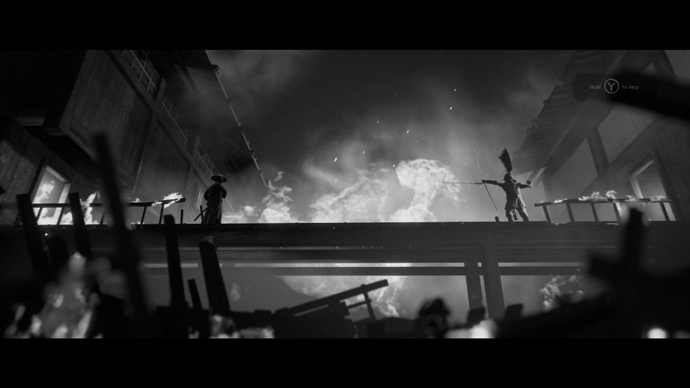 My Series X had no issues presenting all of this to me with the game running flawlessly.  Jesse played through the title on PC and reported that “Performance on PC was surprisingly tough.  With 5800x and 6700xt framerates on Ultra, quality hovered between 80 and 120 depending on how many particle effects were on screen.  Lowering things down to high, gained a lot of performance without much if any drop in the quality of most visuals.”

The musical score was impressively created from scratch using instruments in common use during the Edo period in Japan and the sound design was also top-notch.  Every clash of Katanas (and there were a lot of them) reminded me of the ‘Wu-Tang Clan’ track “Da Mystery of Chessboxin” which was sampled by The Prodigy for their classic track ‘Breathe’. 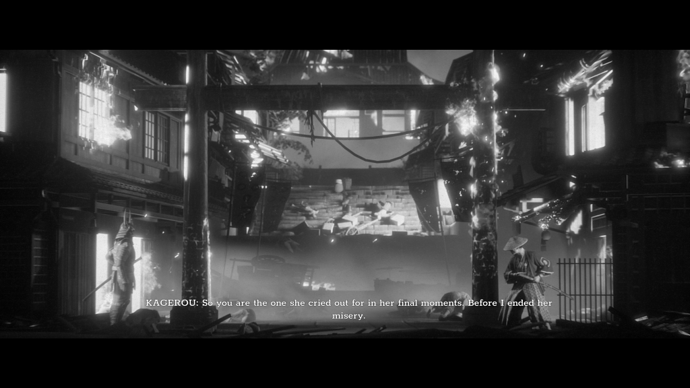 Combat is generally of the classic sword-fighting variety but when greatly outnumbered or fighting some of the harder opponents, ranged weapons prove to be very handy.  These take the form of Bo-shuriken, a Bow and Arrows and a type of gun called an Ozutsu but are not all available at the start and have to be earned as you make your way through the game.

Sword fighting starts fairly simply but becomes more complicated as you learn different combos and come up against enemies with different fighting styles, increased levels of armour, and more powerful weapons.  I cannot express enough how important maintaining your stamina level is while attacking.  Overuse of heavy attacks for example will soon drain your stamina and put you in the precarious position of being too tired to defend yourself.  Finding a moment to drop your guard allows your stamina bar to increase more rapidly, but this is easier said than done when you have multiple enemies both in front and behind you.  After beating all of the enemies on one screen it becomes good practise to let your stamina level recover fully before moving onto the next screen, as quite often you come across even more enemies. 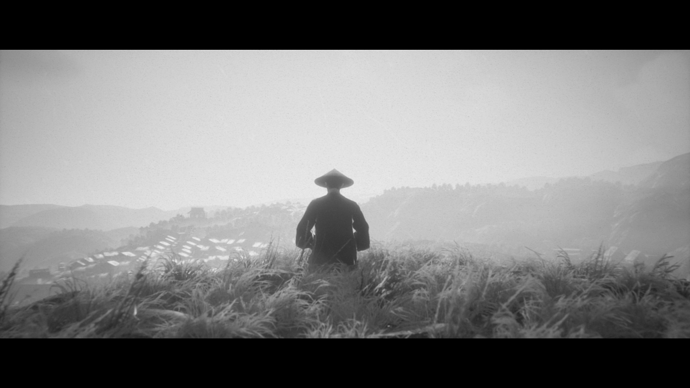 Combat makes up the bulk of the gameplay and is generally an enjoyably balanced experience however it does have its faults.  When playing on the second hardest difficulty (as recommended) the combat pacing can at times be very uneven.  I get frustrated when I have to battle the same group of opponents over and over again and at times I did far too much of this.  Clearing three successive screens of opponents only to be killed by a heavily armoured individual and returning to the start of the section gets old really fast.  Camera distance also changes for different fights meaning that when fighting multiple enemies, you have a zoomed-out perspective whereas one on one duals are presented in Mortal Kombat style.

In a game where you are constantly outnumbered and fighting off foes from all sides, the controls need to be somewhat tighter than they are, particularly when rolling or changing direction.  Playing through on the Cinematic difficulty this is not a problem at all, so personally, I think that the standard difficulty should really be set somewhere between the first and second options.  As for the one-hit-kill difficulty unlocked upon game completion, I shudder to think about attempting that for fun.  It is also possible to accidentally hit up on the Dpad when pulling down on left stick to change the style of light attack.  This is not ideal when deep in combat as it opens up your journal drawing you away from the moment. 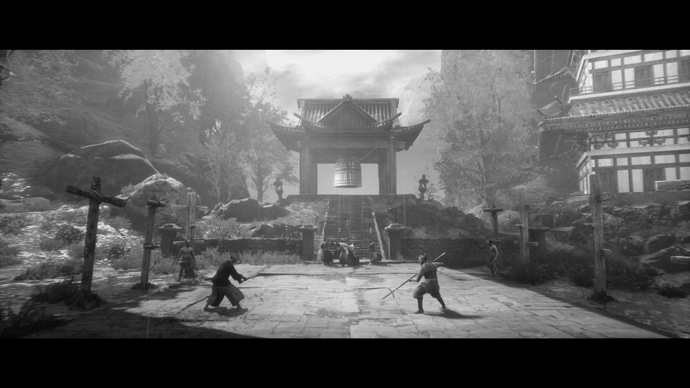 Under bosses are a bit harder to beat than usual bandits, requiring more hits to kill as expected but Bosses can be brutal.  As usual, it is a matter of working out the pattern of their attack and then timing yours to be most effective.  I was happy with the way this was presented but was left feeling somewhat cheated when a boss on his last legs pulled off a previously unseen move and blew me straight off the platform we were fighting on.

Environmental kills are satisfying ways to kill multiple bandits but I found one which glitched when I destroyed a small dam.  The first time I used it water cascaded onto the sentries and washed them down the river.  After being killed and respawning I attempted the same thing again but cut the ropes in a different order.  This rewarded me with the same sound effect and the bandits being washed away by absolutely nothing as no torrent of water was generated. 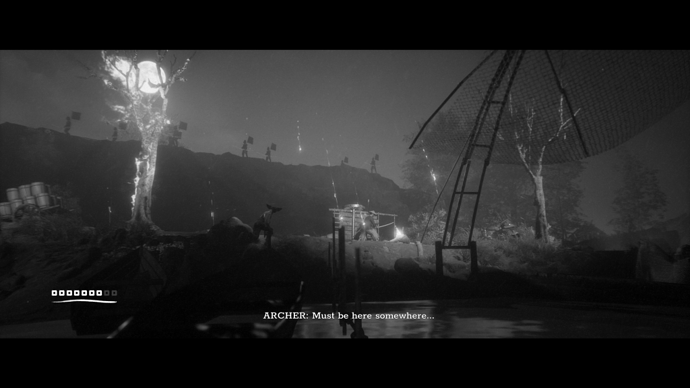 Shrines act as a one-off save and refill point for both health and stamina, unfortunately, these tend to be abundant in some of the easier sections of the game and ‘rarer than hens’ teeth’ in the more difficult parts where they are needed most.

It’s up to you

As the story progressed, I was required to make four choices to choose my path through the adventure.  This I assume will present players with different cut-scenes and endings depending on the combination chosen.  There are fairly straightforward puzzle elements, timed sections, and all manner of creepy interactions including giant spiders, ghost horses, and skeletal flag bearers, once you enter the supernatural realms of the underworld.  Getting in is easy, leaving the place is a bit of a mission.  The graphics once again are a joy to behold in this part of the game as the environment collapsed and recreated itself repeatedly around me. 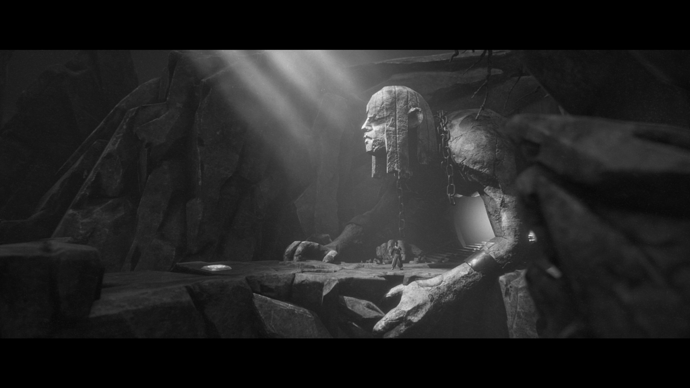 All in all, the game is impressive and an apt tribute to its cinematic roots.  Blood spurts satisfyingly as you strike enemies down, burning arrows soar overhead ominously and supernatural sections are sufficiently eerie yet intriguing.  Personally, I found certain sections of combat to be punishingly tricky due to the lack of nearby save points so I would recommend playing through using the Cinematic difficulty if you want a relaxed experience. 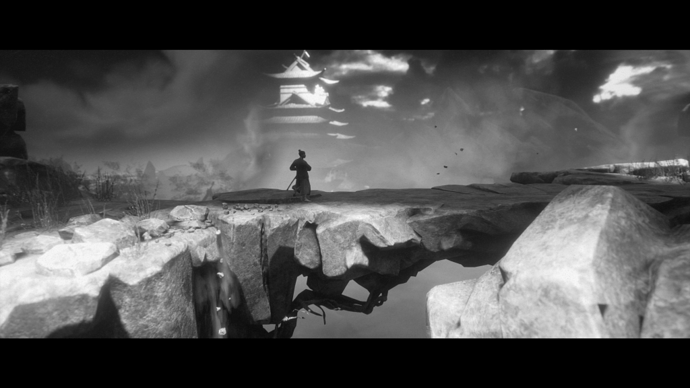 Trek To Yomi is yet another title being released day one on to Xbox Game Pass. Why not check it out for yourself? 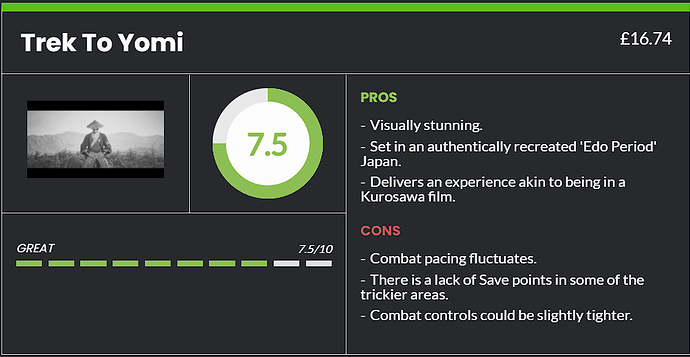 Oh yes, definitely playing this! The perfect game for me to switch it up with RDR2.

Won’t be until Saturday evening that I get to check it out though, cause I got my nephew of 10 over. I doubt this is suitable for him, haha.

Thank you. If you want a chilled gaming experience play on the first difficulty… Or play on the second and let the rage run free.

Thank you. If you want a chilled gaming experience play on the first difficulty… Or play on the second and let the rage run free.

Good review! I might actually have to play this… Not my type of game maybe, but the Kurosawa influence and look is very intriguing indeed.

I’ll put it on my palette-cleanser-between-games-list!

i think it has a story mode

I played some of this tonight, and it is awesome! That whole Samurai movie vibe is great, and I was having fun just slashing enemies up too. I will definitely be finishing this one.

You can skip the cut-scenes.

Played a bit yesterday too and it was really fun, I’ll start this one after Tunic (which is incredible btw!).

The only sure thing is that Trek to Yomi looks absolutely amazing…kinda looks like the god-tier pre-rendered backgrounds of the PS2/GC era (REmake/RE0 and Onimusha 2 come to mind) but it is actually real time now, really impressive stuff.

The first is Cinematic. The second gets harder.

Has anyone experienced any video problems with this game? Getting weird video drops that make it impossible to really do anything in it.

Not me. What are you playing on?

Series X. I don’t have this problem with any other game I’ve played. It’s weird.

That is odd. I had no issues at all.

Must have been a cabling issue. Fiddled with my HDMI cables and it got right all of a sudden.

Must have been a cabling issue. Fiddled with my HDMI cables and it got right all of a sudden.