Review | The King of Fighters XV 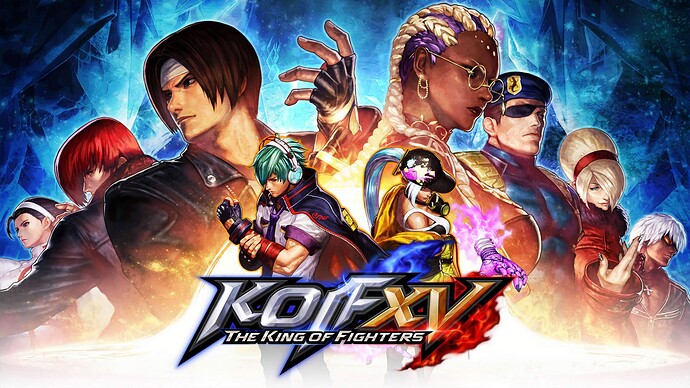 The King of Fighters franchise started back in 1994 bringing multiple SNK fighting games together in an all-out team-based brawl. 28 years and 14 sequels later we have the latest and potentially greatest iteration of the beloved franchise. It’s been six long years since the well-liked (though quite ugly) “return to form” that was KOF XIV released on PS4 but not Xbox. The series is back and looks-wise it is a massive improvement over its fellow 3D predecessor. How does the rest of this rather large fighting package hold up? Let’s find out.

It’s Time for Another World Tournament

First things first, I love fighting games, but I am not an expert at them, so I’ll be giving a casual friendly look at this title. The King of Fighters franchise was one of my favorite fighters after I found it on the Dreamcast. Bringing together multiple fighters from various SNK fighting game franchises it was an incredible and dense game that was fun to play but hard to master. That’s still the case here in KOF XV as things felt familiar but within a few matches against tougher and tougher CPU opponents I quickly found out just how deep the combat system here can be.

Sadly while the online servers are available I was unable to find an online match during the short 4 day period I had between receiving the review code and the review embargo hitting. Keep an eye on this page in the future and I’ll update the review with my online experience as soon as possible. I did check in with players of the open beta that occurred pre-launch and was assured that the game’s rollback net code felt great if you were in a match with a 4 or 5-star connection rating.

Getting back to the premise of the game. There is always a tournament with a story you’ll need to google if you want to have any idea as to what is going on. It is filled up by a multitude of teams from various SNK properties. The roster here is at 39 to start with 12 more characters coming in 4 player passes throughout the rest of 2022. The deluxe edition of the game will run you an extra $25 US and offers up the 1st two-character passes along with some cosmetics. The launch roster consists of:

The announced DLC characters feature two more teams of 3 each. Pack 1 consists of the Garou Team consisting of Rock Howard, Gato, and B. Jenet. Pack 2 has Rock’s father Geese Howard, Billy Kane, & Ryuji Yamazaki and are known as the South Town Team.

To match this large roster of familiar and new faces are a decent number of modes. None of them are unique or new but everything I hoped for personally is on hand here. The game’s modes are:

Next up is the Online section of modes which is the largest in the game:

There is also a tutorial mode that breaks down both the basic and advanced combat and movement abilities in the game. It’s easy to complete and gives you an achievement for 10 minutes of work. The DJ station allows you to play through all the music of KOF XV, KOF XIV, and KOF ’94 that you have unlocked and was great for making the video of this review. The Mission mode has you attempt to complete 6 progressively difficult combos with each character and is a legitimately good way to learn the tougher parts of the game as you try to perfect your mains. The Gallery features any videos and voice clips you have unlocked, and the game has a rather small number of overall options. One thing I was asked during the review process is can you turn off Rush Mode and I did not see any way to do that. What is Rush you may be asking?

The Art of Kicking Ass

In an attempt to be more approachable to the masses Rush mode was introduced in KOF XIV, and it is The King of Fighters version of auto combos. Each combo starts with the Light Punch button three times and then depending on your meter level you can use different attack buttons to use different moves automatically. It’s fun for the more noobish out there like myself, though being able to turn them off is something the more hardcore out there had hoped for. I could not get into a ranked match, but I do wonder if perhaps they might disable auto combos in there? It would make sense, but I won’t be able to know until the game hits early access after this review is out.

This is a four-button fighter. X is your Light Punch & Y is your Heavy Punch. A is Light Kick and B is Heavy Kick. Pressing X and A together and holding either left or right will have you do an invincibility dodge, but it does leave you open for a split-second to an attack. The game features all the returning advanced mechanics such as Dashing, Hops, Hyper Hops, Hyper Jumps, a five-level meter, MAX mode, Climax & Hyper Climax super moves, and the Blow Back attack. There is a lot here and the advanced tutorial will be your best bet in trying to begin grasping it all if you’re new to the series. Thankfully with a ranking system, the online should hopefully face you again players of your level should you choose to fight the online masses. There is a new Shatter Strike ability using the familiar Quarter-Circle-Forward movement followed by Heavy Punch and Heavy Kick that severely quickly incapacitates opponents at the cost of your meter. This is a dense, well-balanced, and incredibly satisfying fighter.

At least at the start. During the game’s open beta the best of the best had already found out 100% hit combos and various other issues, but in my time with the game (entirely against the CPU at various difficulties) it felt fair at the very least. The CPU on hard is relentless and excellent at countering but after working with my favorite Fatal Fury team enough I was able to beat the end boss of the story mode and level 5 CPU opponents at a 50/50 clip.

Graphically things are a massive step-up over KOF XIV’s initial take on the 3D version of these characters. Long one of the most beautiful 2d sprite-based fighting games out there this is a far better-looking game. Texture work, shading, lighting, and the general art direction are massive improvements. One areas where things are a bit over the top are the outfits and breast sizes of the female characters. I know most of the community out there won’t care, but I just had to mention how unbelievably horny this game can be with long shots of breasts and butts for pretty much every female character in their pre and post-match animations.

Every character has a nice selection of color swaps, and various versions of the title come with extra outfits for a few fighters as well. Image quality is crisp, and everything ran at 60 FPS on my Series X with no noticeable drops during the most intense effect-filled super moves. Certain characters have interesting pre-match conversations when they face each other with unique animations & and the endings feature a mix of pre-rendered and lightly animated scenes. Audio-wise things are excellent in every area, that is as long as you turn off the “excited” announcer and go with the standard one. I found the more subdued take a lot easier to handle. Voice acting is as iconic as ever and it’s a classic mix of good and hilariously cheesy. The music on offer from KOF XIV, KOF ’94, and of course the new tracks for KOF XV are fantastic. Being able to set what you listen to each match is a nice touch as well if you have a particular favorite you’re fond of fighting to.

Awesomely sauce! Now I just need to actually get my hands on a Series console

Awesome review! I wish more fighting games had online training. The jukebox thing of being able to change music is cool too, hopefully they’ll add music from XIII later.

Now I just have to hope they add it to XCloud sometime so I can actually play it lol.

Heads up, they have music from all previous games, they just need to be unlocked through playing story mode with specific team compositions.

Heads up, they have music from all previous games, they just need to be unlocked through playing story mode with specific team compositions.

I thought that might be the case but it’s really not clear at all through the UI.

I thought that might be the case but it’s really not clear at all through the UI.

True. Also wondering if there is some day one patch that might not be out yet.

Nice review, I’ll pick it up in a few months, still on MK11, SFV, and SC6 at the moment. Sucks about the last boss being a slog, but the rest sounds great, especially the jukebox mode.

It’s just trying to do progressively harder combos, good learning tool but not much else.

It’s just trying to do progressively harder combos, good learning tool but not much else.

They might add stuff later. Fighting games always upgrade as they go on. The actual fighting is where its at though. Hopefully this game has an active community on Xbox. Going to be difficult at the start as its not on Xbox One. But over time with support and marketing it will do well

Hopefully MS gets this on Gamepass soon. Simply because its new generation Fighter and Xbox shouldn’t be left out in the cold like last gen with fighters(no SFV, poor Tekken 7 port etc…)

Ooof. PS5 version is the worst version in terms of lag. Not that it matters greatly. Still fast Update: The King of Fighters 15 still reportedly has more input lag on...

Update: Noodalls has now released his findings for The King of Fighters 15's input latency on Xbox Series X and Xbox Series S, which have been added to the original story below.The PlayStation 5 began garnering itself something ... 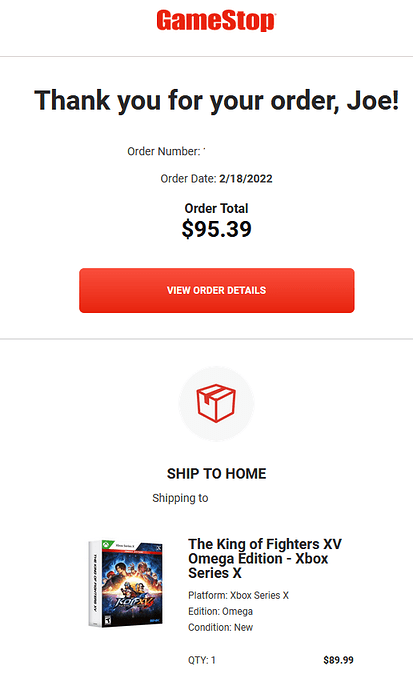 did you get this? my Gamestop order took 1 week to arrive. Never ordering Xbox games from Gamestop again. Useless.

did you get this? my Gamestop order took 1 week to arrive. Never ordering Xbox games from Gamestop again. Useless.

I ended up canceling lol. Gonna buy it digitally if anything

I ended up canceling lol. Gonna buy it digitally if anything

Anyway I love this game. PLay it regularly 20-30 mins everyday before a long Elden ring sessions. This might be the first Fighting game I’ve played where I enjoy using more than 2-3 characters.

This game got its first sale and so maybe a few more of us will check it out now at its $45 sale price. I have to say the game is better than expected. The gameplay feels good and the graphics are clean and stylish. Definitely recommend this game. 9.5/10

This game got its first sale and so maybe a few more of us will check it out now at its $45 sale price. I have to say the game is better than expected. The gameplay feels good and the graphics are clean and stylish. Definitely recommend this game. 9.5/10

Bought it at launch for 60 and dont regret it. I play it sparadiclaly but love it.