Review | The Dark Pictures Anthology: The Devil In Me

Originally published at: Review | The Dark Pictures Anthology: The Devil In Me - XboxEra

Having enjoyed all of the previous titles in the Dark Pictures Anthology I have been waiting with bated breath for this newest instalment which marks the climax of season one.  The rumours regarding this title being set within the modern-day British political establishment have turned out to be false but let’s face it, no one would want to play a game that horrific.

The Dark Pictures Anthology has incredibly high production values and can accurately be described as a series of ‘interactive films’.  Split-second decisions made by players can make a huge difference to how the story develops and also mean life or death for the characters.  Making decisions within games that have true consequences is something that I always enjoy so let’s pack our bags and head off to a truly unique hotel in the XboxEra review of The Devil In Me. 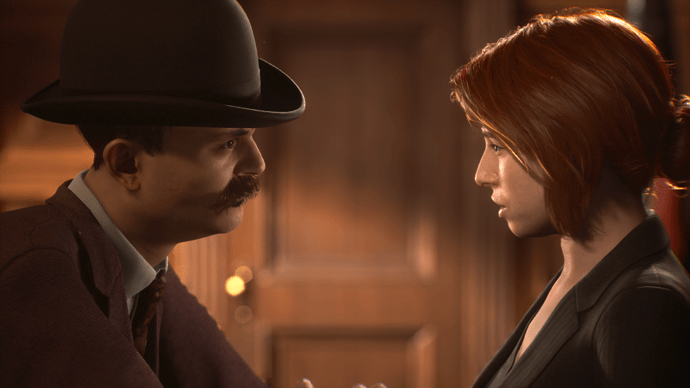 This review will be as spoiler free as possible but the general premise of the story is that a production team working on a series on serial killers is invited by mysterious stranger Granthem Du’Met to film at his reconstruction of the World’s Fair Hotel on a remote island on Lake Michigan.  This is not just any hotel as its nickname the “Murder Castle” implies.

Originally designed by America’s first serial killer H. H. Holmes the building is a labyrinth of specially designed killing rooms.  The maze-like corridors contain numerous locked doors, bricked up exits and moving walls that can be manipulated to disorientate those trapped within, funnelling them into potentially ingenious demises.  Du’Met is soon spotted running to and sailing away on the only ferry back to the shore much to the bemusement of the guests.  After a dinner consisting solely of wine someone dressed as the aforementioned Holmes starts stalking the visitors, tension mounts and things get very interesting. 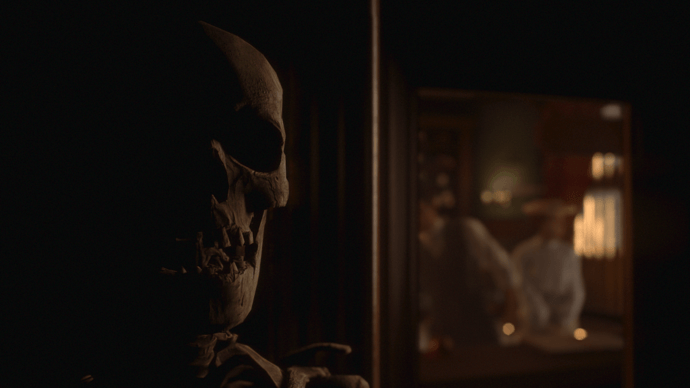 Being based mostly within the confines of a large building this is the most enclosed entry in the series so far.  Immersive soundscape, lighting and map design have been skilfully used to create a tense and claustrophobic atmosphere.  Each character has a different type of light source ranging from a camera flash to a cigarette lighter.  The usefulness of each device as a torch makes a vast difference to what each protagonist can see as they navigate the building.  This premise has been combined with some inspired booby traps to create more jump scares than any of the previous games and these are quality jump scares.

Every breath you take

Some slight changes have been made to the standard Dark Anthology controls and game mechanics for this title.  Players can now crawl under objects, are required to hold their balance to gain access to areas at height and have a limited inventory system.  Tool-based puzzles have been introduced and the classic ‘hold your breath’ sections have been improved immensely.  In past games, it was too easy to hit a button as soon as it appeared on screen due to the muscle memory and speed required to beat quick time events, resulting in instant failure to hold your breath.  Mercifully, this has been recognised by the developer and subtly improved to prevent accidental failures. 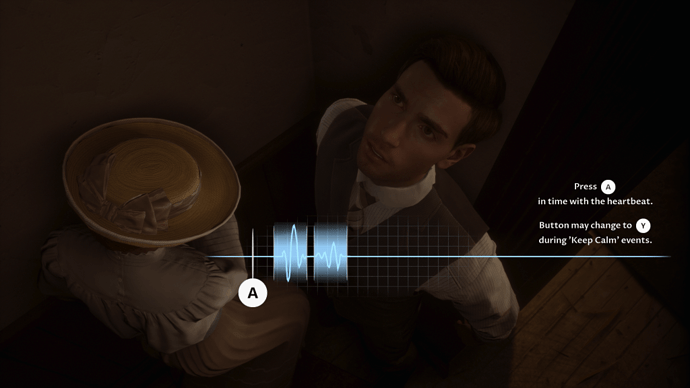 A puzzle platforming element is also present that has been expanded on from the previous entries in the series.  Climbing up and clambering down to move an object to allow access to another area is also used to a greater extent than previously.  Grabbing a heavy object and moving it is a very easy process that Adobo Studio could certainly learn from after the nightmare equivalent in A Plague Tale: Requiem.

A far higher level of exploration is possible than in any of the other anthology entries so it is a good job that the location is so intriguing and worthy of investigation.  Standard QTEs and button mashing moments are still part of the experience for fans of the series as are the hidden premonition pictures and collectible objects which fill out the very detailed story background.  In particular, discovered dictation machines present the player with exceptionally high-quality explainer cut scenes. 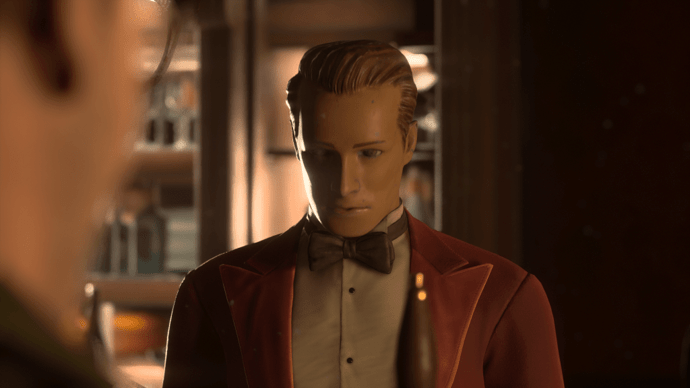 Players can manipulate the relationships between each character through conversational choices which seems unimportant early on but can make a big difference later in proceedings.  For example, if you are put in a position where you have to choose between two people who should live and who should die it makes a big difference if one is your friend.  It is certainly worth keeping this in mind when choosing to be sarcastic or nice to one of the other characters.

Decisions that change the direction of the narrative are the best ones.  Although being based on either the head or the heart they are generally required at such a speed that you never think about that aspect.  I will admit to killing someone by mistake by pressing the opposite choice to the one I had decided on but that is all part of the fun.  To get all five characters to the end of this game on a first-attempt basis would be a miracle considering what they are faced with.  Choices presented give no indication of what could happen next and can rely on the correct chaining of previous decisions so there is always an element of luck involved in successfully navigating your way through them.  Run or hide? relax or investigate? The choice is yours but be prepared for the result of your decision. 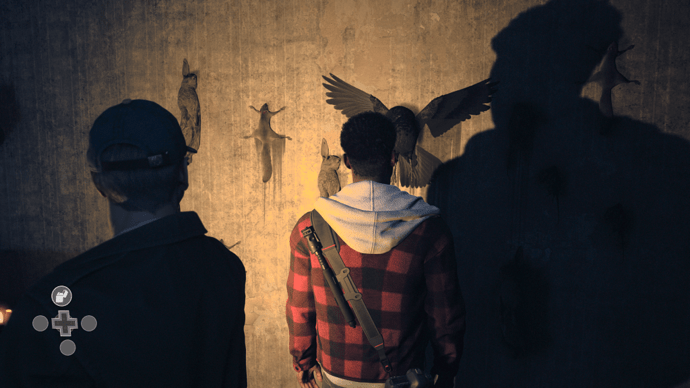 While I do not generally like games or films set in dark environments, I loved this game.  Exploring in dim areas is not a chore as the game design is so well thought out.  Due to the use of discordant snatches of music, creepy animatronic mannequins, jump scares and top-class atmospherics the tension and sense of malice ratchets up and stays at that level.  I was sitting on the edge of my seat for hours at a time and finally concluded that this is not something to be played late at night if I want to get any sleep.

The villain of the piece is so well realised that they are genuinely terrifying, coming across like a Victorian Michael Myers on steroids.  I can honestly say that no other game I have ever played has caused me to shout “Oh f****” every time the killer made an appearance on screen. 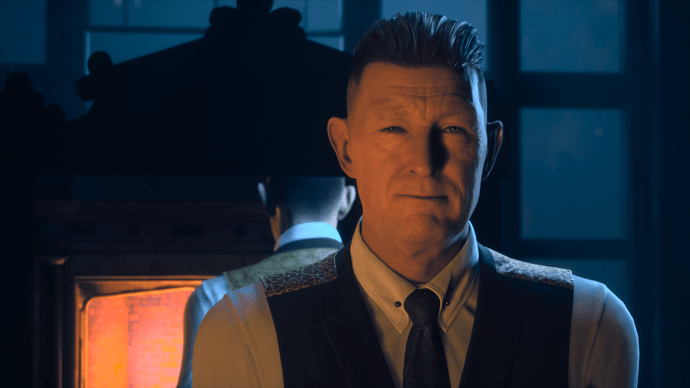 In conclusion, without a doubt, this is the best Dark Anthology game so far and a true climax to season one.  Not only fans of the series but fans of the genre will love playing this.  The acting, visual detail, sound design and writing could not be bettered here.  Series mechanics have not only been improved but also extended delivering an extra level of depth to a fantastic experience.  In short developer, Supermassive Games has delivered a horror classic that will keep players on the edge of their seats for hours.

Who Lives and who dies?  You can try to decide!

Watched the review on YouTube, and of course liked it. Good stuff man. This game seems surprisingly good! I personally did not enjoy Man of Medan much, didn’t play the other games yet. Will I still like this you think?

Watched the review on YouTube, and of course liked it. Good stuff man. This game seems surprisingly good! I personally did not enjoy Man of Medan much, didn’t play the other games yet. Will I still like this you think?

Definitely a good chance you will like this. Man of Medan is by far the weakest entry.

It starts slow but once it gets going it is great.

I know I’m in the minority, but I actually didn’t care for the “gameplay” changes they’ve made to this. The inventory system was pointless (and actually caused me to lose a character to death), the constant amount of shimmying towards the end was infuriating, and the moving the big objects (like a big ass book shelf that he moves with such ease lol) was eye-rolling. I think the taking pictures of certain things was about the only thing that maybe added something to it, but I still felt it was useless. I really wish they would’ve put more focus on the Saw-like traps. This is easily the best premise of all their games and I really wanted to love it, but there was just so much tedious gameplay parts, that it bogged it down for me. I still highly suggest ppl check this one out tho, especially if they like the Dark Pictures games. It’s my 2nd fav one behind Little Hope. My order for the Dark Pictures games:

My order for the anthology would be:

Thanks for the review. Only started it but Im enjoying it so far.

Thanks for the review. Only started it but Im enjoying it so far.