Originally released back in September of 2021 on Xbox, Tainted Grail: Conquest is a unique take on the roguelike deck builder. The game features a fully 3D world, well-modeled enemies, a few friends, and lots and lots of mist. This is set in Avalon after all, the mythical area from the legends of King Arthur. Mystery abounds as you enter a world destroyed where time itself is broken, and you must traverse the Wyrdness to try and piece it back together. It is available now on Game Pass for console and PC and it is darned fun. 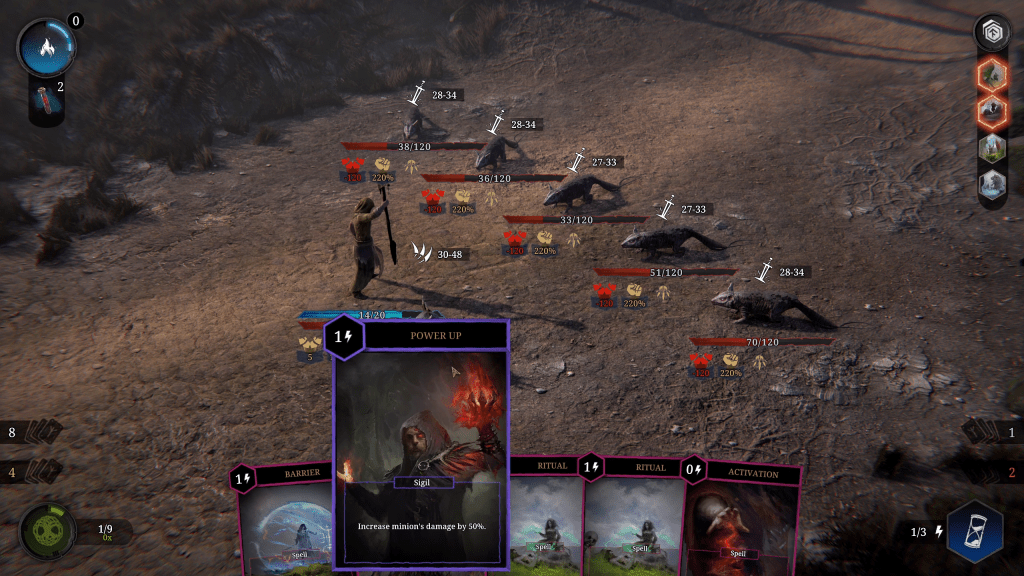 You Broke the Universe Again, Merlin!

One key way that developer Awaken Realms Digital differentiates this game from the rest is the focus on being a story-rich RPG alongside the roguelike deck-building action. There is a large, well-written, and manageable amount of text as you play. Your runs rarely get bogged down by this text, instead, you get hits whenever you complete an area, recruit a new member to your village, or find a special NPC/Area on the map. The story is about Merlin and Arthur’s voyage to the mystical island of Avalon going horribly and resulting in a world/time destroying calamity that the player character needs to fix by beating four progressively more difficult beasts of legend. To do this you have nine… well more like three classes at your disposal. A warrior, a summoner, and a ranged focus archetype that each have three variants to them. I found the summoner to be my go-to playstyle and I used him throughout much of my time with the game.

After an introduction with a horned creature, a large number of candles, and a city in disrepair the game begins. Multiple paths branch from this small town and a successful run sees you clearing all four. This is a roguelike, so each area is procedurally generated, rather small, and is dotted with various helpful and combative items throughout. It is a fun system in comparison to the more text/2d based ones seen in titles I have reviewed such as Slay the Spire and Monster Hunter (both on Game Pass as well). Moving around and avoiding particularly nasty fights was a fun twist on things and the graphics look darned nice for the genre and price ($19.99 in the US). The bread and butter of any game like this though is that deck-building combat and the persistent upgrades you can acquire to hone that meta-breaking build to your heart’s content. 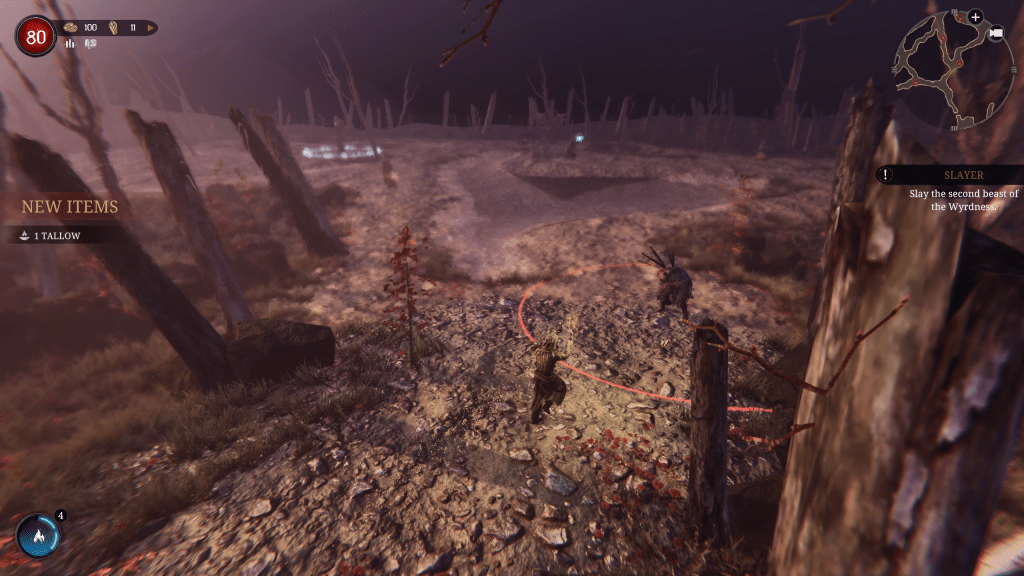 Tainted Grail uses a similar energy system to other games of its kind. Each card has a set base cost, but various per-run buffs can change that. Each run will see you level up with randomized perks and cards becoming available as you progress. Finding the right class, cards, and perks is the carrot-on-a-stick that makes these games so damned fun for me. I struggled mightily to beat the first boss with the initial warrior class, but on my second run with the summoner I not only beat him, but I destroyed them, and it felt incredible. You can be at the mercy of that random nature but figuring out what works best in each situation can be so damned fun and the run-based nature with it is always available “save & quit” so that I can come back later makes this the type of game I will always have installed.

One substantial difference here is the block system. Instead of blocking a set amount of damage a block will completely negate all damage. To counteract this most creatures can attack multiple times in one move. Stacking blocks or adding in the barrier cards helps counteract this in a never-ending balance. The same goes for your attacks and enemies. You will need to level up as much as possible in each area to be ready to take on the legendary beast that is your main target, which encourages you to push as far as possible so that you can maximize your build. Alongside this per-run leveling is an overall account-based system tied mainly to classes as well as finding residents to build up your town. There are seven to find in total and they offer key services such as blacksmithing, man-at-arms, and perhaps the most important is the candlemaker.

To go anywhere in this game, you need light to pierce the deadly mist. The town is a haven and certain parts of the map have stones that offer brief respite around them. When not in those areas you will rely on your Wyrdcandles which are limited in supply and duration at first. As you progress through the game, you will earn various currencies that help you permanently upgrade the items you take on runs, such as the runes you can find and slot into your gear for per-run benefits. The mix of per-run and account-based upgrades feels great and encourages you to try out diverse types of builds as nothing ever goes to waste. You are always earning something, and things rarely feel pointless. One main issue for me is it never felt quite as deep as Slay the Spire or even Monster Train to me. The nine classes are just three with a little bit of variety for each and the overall card count felt a bit wanting at times with the same 5 or 6 cards being used in many of my runs. 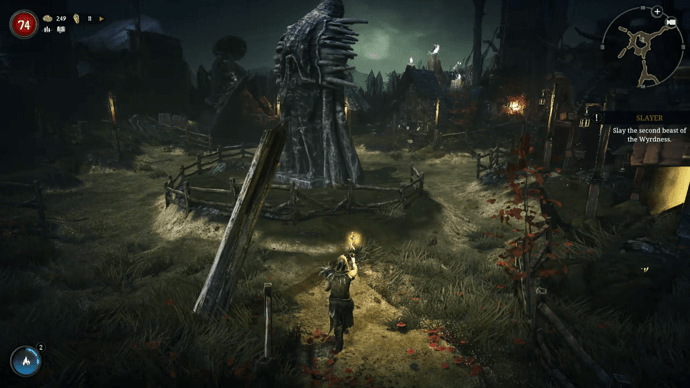 The Sites & Sounds of Avalon

As stated previously Tainted Grail: Conquest is far better looking than the average game in this genre. A mix of 3D models, well-drawn art, and effects during combat help keep this dreary hellscape from ever looking dull. The control while moving around your character in-between fights is a bit stiff but it is still so much more than you normally get. At the start of the game, you are met with a competent character creator that saw my inner pink demon come out to play, and the artwork in the cutscenes is solid across the board.

Sound-wise the music is ok if a bit forgettable, but the voice acting is damned good. Featured during cutscenes and when you interact with NPCs much of the game is fully voice acted. The writing allows the actors to build up the deep mystery of what is going on in this fractured world in a way that elevates things. The story of Monster Train for instance is a few lines in an opening and then you never think about it again. Having something fleshed out to this degree added to keeping my interest quite a bit. 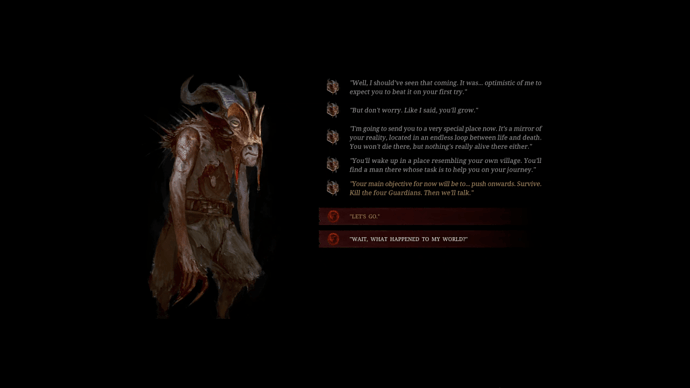 If you enjoy deckbuilding roguelikes, and the thought of one with a competent and voiced story excites you then this is the game for you. Available on both console and PC with Game Pass there is no excuse to not at least try it. While it may not reach the highs of others in the genre tactically during its combat it makes up for it with its competency in everything else. So, pick up your Wyrdcandle, traverse the mists on the broken Isle, and start cleaning up that kook Merlin’s mess in the Mists of Avalon.

I liked it quite a bit, but as with every roguelike deck-builder, it got to a point where I was wondering why I wasn’t playing Slay The Spire instead as I’m at ascension level 5 with 3 characters…

Definitely worth a try though for StS and strategy fans in general, good review.

Your first and second run against the boss is exactly what happened to me when I played this awhile ago. Playing the summoner character just seems to work out better than the warrior.

You mentioned Slay the Spire but I haven’t played Monster Train yet. I’ll have to try that one out. Thanks for the review!