Soulstice is a stupidly fun, great-looking title that came out of nowhere for me. It’s a Devil May Cry/Bayonetta-style action title that has an intriguing plot, great music, fantastic combat, and an occasionally stunning art style. Let’s break down why this is one of my biggest surprises of the year, and absolutely worth checking out. 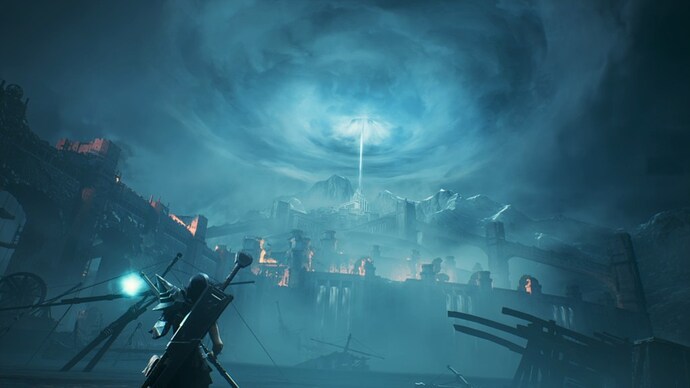 Briar and Lute are sisters tied together in death. Briar is alive but corrupted by darkness, and Lute is dead but her soul lives on in bond to her sister. You work for “The Order” as part of the Holy Kingdom of Keidas. Lute’s death came as a sacrifice to create the “chimera”, The Order’s servants who fight against the evil pouring in through the Veil. It’s complicated, a bit convoluted, and a little cheesy at times but I ended up really digging the story. It is always serious, with little to no humor, but thanks to solid voice acting and writing I ended up finding myself heavily invested in where things were going.

The game takes place in the massive city of Ilden. A portal has opened above it allowing scores of Wraiths to enter, destroying and possessing all they come across. The possessed and wraiths comprise the majority of your enemies, especially early on. The game is roughly 15 hours long in total and after a slow start the combat and enemy variety picked up significantly about 5 hours in and it was balls-to-the-wall action from there. Soulstice is a high-octane action slasher with an emphasis on the bond between the sisters, both voiced excellently by Stephanie Joost.

The story mixes in mystery and intrigue well, slowly dishing out the plot through a series of flashbacks both in cutscenes and playable sections. None of this matters though if the gameplay can’t keep up, and after an initial slow start it very much does. 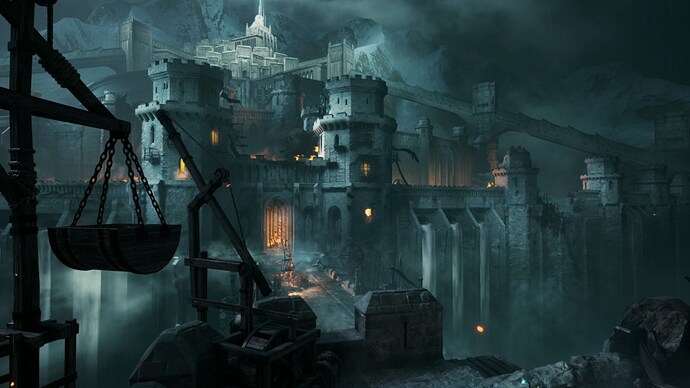 She Is My Knight

The combat starts out feeling basic, but quickly you’ll unlock abilities that make it feel great. You are a pair, one a massively powerful and fast knight and the other a ghost with magical powers. The upgrade tree for both is large with Briar’s focused entirely on her weapons and Lute’s on four separate paths of abilities. For the most part, Lute does things on her own while you mainly control Briar, as you unlock more of Lute’s tree however you can use the B button as your main counter for enemy mobs. Depending on the mob and attack type this may be a parry or freeze the enemy in place. Successful hits and defensive abilities will add to your unity meter. Being hit or time will lower it, but if you’re able to max the meter out you’ll eventually unlock a plethora of super moves that are tied to overly long (though thankfully skippable) animations.

These super moves and even basic attacks work in unison with the entropy meter. Early on you’ll unlock the abilities tied to both triggers. Basically speaking if you see ghostly blue then you use the left trigger, if you see scary looking red then you use the right trigger. While these abilities are active you build up entropy, and if you max out Lute vanishes for five or so seconds at which time Briar is vulnerable to enemy attacks. Finding ways to balance this out is key to the combat, and as you get more and more upgrades from the various red and blue crystal currencies that constantly drop you can eventually become so powerful that entropy is barely a concern. It feels great, the power ramp is expertly balanced, and I freaking loved the combat systems here. B is your dodge button, and you can do three in a row before getting stuck in a recovery animation.

Briar has a series of different weapons each with a specific use case that best suits them. From a giant axe that is great for crowd control to a huge iron fist that can break enemy armor more quickly. You’ll even get a bow for ranged attacks that is not unlocked until 8 or so hours in. They all feel great to use in conjunction with your main weapon: the sword. You will use the d-pad to choose between your weapons which are bound to the X button. Your sword is on the Y button and is a quick hitter with a small number of combos to unlock being available for each weapon. There is a ton to the combat and unlock system and the game does a decent job of explaining it all, but in the middle of things, it can feel spam heavy. 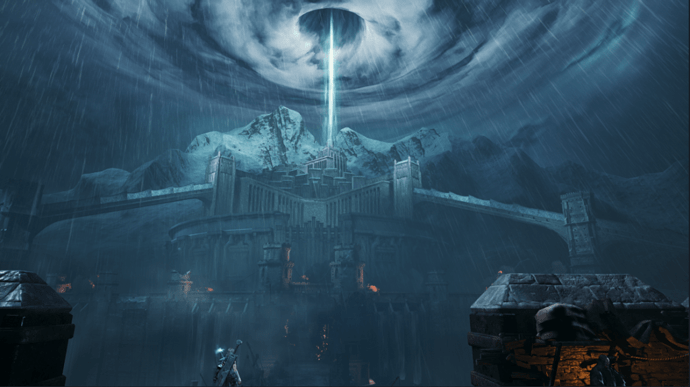 Graphically the game is a slightly mixed, mostly great-looking bag. Outside of combat, the game uses a set camera perspective that you have a light amount of play with. During combat, things move to a behind-the-back view with enemy locking making things easier to keep up with. There are a few graphical modes on offer with the typical 30fps resolution and 60fps performance options paired with a nice to-see unlocked framerate one that mostly held to 60 from what I could tell. There are parts of the game that look a bit rough, mainly in the textures but for the most part, I think it looks fantastic. For a large portion of the game, you can see the main part of Ilden in the background with its swirling vortex in the sky and it can be jaw-droppingly gorgeous.

The game has a very lightly cel-shaded look to it with good-looking character designs and some truly horrific-looking enemy ones. There isn’t a ton of variety early on in the enemy types but around the halfway point, much like with the combat, the amount of variety on display picked up significantly, and by the end, I loved how the game looked. Performance did have a large number of hitches before a pre-launch patch hit, but things felt a lot better post-patch though I didn’t have much of the game left to play at that point.

The voice acting for the main characters ranges from good to great with the lead characters being really well done. Some of the cutscene side characters are weak but the main storyline is done damned well. The music is awesome when it kicks in. Each fight is treated as its own graded level and if you don’t choose to continue the battle music will keep going. I found myself sitting there and listening to it for minutes at a time often because I loved it so much.

I didn’t run into any bugs while playing the game on a Series X and utilizing the Quick Resume functionality on the system. Accessibility wise there are multiple difficulty options as well as various gameplay toggles to help out those who need it. There are multiple options for the in-game subtitles to make them easier to read, and a series of gameplay assists. You can have the game automate combat or field usage (the trigger abilities), toggle whether you have to hold down buttons for UI elements if activating the inventory pauses the game, and more. It was awesome to see, especially for such a new and seemingly small development team. 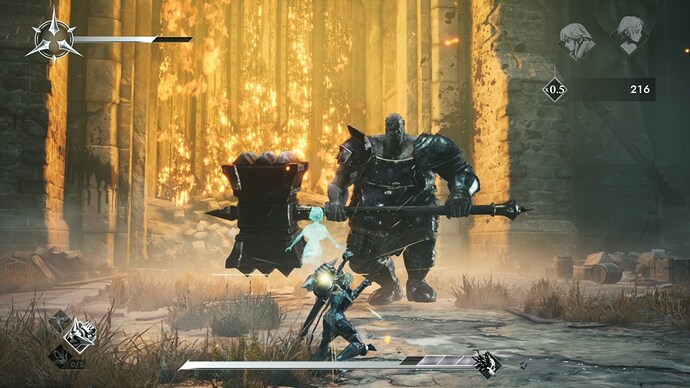 Soulstice came out of nowhere for me and it is fantastic. Its mix of brilliant combat, an intriguing plot, great music, and occasionally gorgeous graphics had me hooked instantly. This could be the beginning of a great series and one excellent title you do not want to miss.

Thank you, @Doncabesa! I would not have known about this game without this review and it sounds pretty awesome. It’s going on my wishlist.

It looks really cool to me and thankfully not soulslike. Will keep an eye for it on discounts, it’s $40 so should be $20 or less later.

I get the impression from this review that Soulstice is a step in that direction?

I had played a few free weekend or demos of souls like games before and I dispise the one (maybe two?) hit deaths. I had to cheese magic for all it was worth in Elden Ring. I don’t see the joy in regular insta-death scenarios. It gets very tedious. It feels “cheap” (to me). I don’t have the time or patience to memorize every move set for every enemy large and small. It begins to feel more like a chore to me. As soon as someone describes a game as souls-like, I lose interest no matter the genre.

It’s a DMC/Bayonetta-type, nothing Souls-like about it.

It’s very nice to see it is NOT Souls like. After I saw that name for this game at E3 I immediately thought it was one, haha.

This game looks awesome, happy to see a AA character action game as cool and as polished as this one. Combat looks fun and the game looks surprisingly good, also the semi-fixed camera angles (a la Devil May Cry) throwback when not in combat is fuckin’ cool. I’ll definitely check this out soon.

This would have been a great Game Pass addition too, even if the second half of this month is already quite crowded.

This game looks awesome, happy to see a AA character action game as cool and as polished as this one. Combat looks fun and the game looks surprisingly good, also the semi-fixed camera angles (a la Devil May Cry) throwback when not in combat is fuckin’ cool. I’ll definitely check this out soon.

Game is decently long. Was tough to get through it once. Bosses were unique, higher difficulties were quite challenging.

This would have been a great Game Pass addition too, even if the second half of this month is already quite crowded.

Maybe in the future in a drier month. Hopefully theres more content added by then and a bit more polished. Game is definitely up my radar. I love the OG god of war games.