Originally released back on October 21st of 2021 by developer Southpaw Games, Skul: The Hero Slayer is a fun take on the ever-popular rogue-lite genre. Featuring well animated 2D pixel art, wry humor, and a wealth of different playstyles the game is now out on Game Pass for Console, PC & Cloud. How does it stand up to the big boys in the genre such as Dead Cells? Pretty darned well! 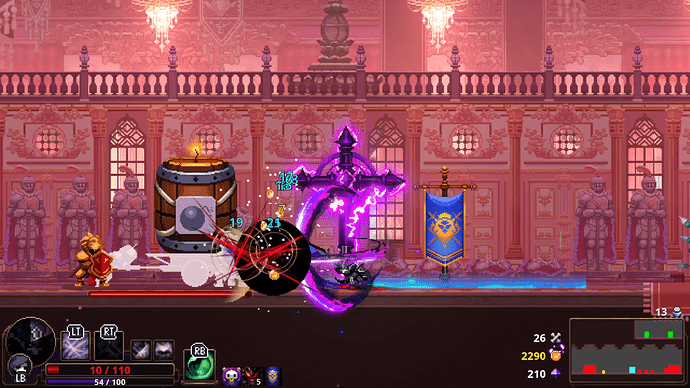 You begin your journey as the cute little skeleton demon, Skul. Your kingdom has been sneak-attacked by the evil humans who are using some sort of crystal to mind-control your once allies. The main goal to start is reaching the Demon King at the top of his castle and saving him from the “First Hero”, an incredibly powerful human. To do this you’ll “borrow” the heads of your fellow demons each coming with a unique set of powers and attacks. This is where the game shines as it is quite slow to start and the early common and rare skull types are basic to use and a bit boring. Once you start finding Legendary and Unique skull types though things take off.

My favorites so far were the prisoner from Dead Cells who had all the attacks and sound effects you’d hope for, and a fiery biker clearly inspired by Ghost Rider who uses his flame trail leaving motorcycle to smash through the games many opponents like a madman. Skull types can have a left and right trigger ability which are randomly chosen from a small pool unique to each skull. Adding to this build variety are your items of which you can have 9. The variety on these is impressive and I found myself experimenting constantly to push just a bit further with each run. Let us get more into the way things control, which thankfully is quite well.

The control layout is standard for the genre. X is your main attack which stun locks most smaller enemies. A jumps, and thankfully you have a double jump right from the start. B is a dash of which you also have two available in quick succession, and Y is your main interact button. Left Bumper is used to swap between your two current skull types on the fly and using it will unleash a unique ability depending on which skull you’re changing to. Right Bumper is tied to your quintessence which can be a wide variety of spells and abilities that vary from giant hands punching down or small slugs that attach to faces and amplify damage taken. Left and Right Trigger as previously mentioned are your two ability attacks which vary greatly with each skull type. Controls aren’t nearly as tight as Dead Cells but few games have reached that level of greatness. Each room is a mix of light platforming and large enemy counts. To proceed you must kill every enemy in the room, after that you can grab your reward and choose 1 or 2 doors with different looks. Green Skulls on the door mean you can find a new skull to use, while red ones adorned with jewels and gold mean you’ll gain a lot of the per-run gold currency at the end. You use that gold currency at the in-run vendor to boost your current run with various items, spells, and health gains. There is also a bone currency that is only per-run. This is used to power up your various skulls into greater forms for as long as that run lasts.

The permanent upgrades for Skul are tied to the dark crystals you acquire from defeating enemies. These are used on upgrades at the starting area that stay forever and massively power you up so that after a few hours of playing you’ll be clearing the first few areas incredibly quickly compared to how long runs can be at the beginning. Unlike many roguelites health drops and regeneration is rather frequent, which is good as you will be getting hit a lot from the sheer numbers thrown at you. This is not a short game either, you can expect a solid 25 hours or so before you’ll roll end credits with upwards of 40 hours if you want to see all the game has to offer.

I’ve Got A Bone to Pick With You

Graphically things look great. Attacks are easy to read, and effects rarely obfuscate what is going on around you. Enemy attacks are well-choreographed in general, and I rarely felt cheated when I was hit. The action gets hectic and it’s all well animated. Image quality is crisp, and I really enjoyed the art style. It’s not a serious game, and the style matches that tone well. Music-wise it’s a mix of OK and excellent. A few of the cutscenes are voiced, though not in English, and are well done. The majority of the game is text-only and the writing pushes cheesy jokes without being over the top about it.

The options are rather limited but there is a rookie mode that allows you to lower incoming damage by 50% if you are having a tough time and want a more casual experience. I didn’t run into any bugs but I was sad to see that the game does not support Quick Resume as of yet, and since it came out nearly 4 months ago I’m not sure if it ever will.

Skul: The Hero Slayer has been a pleasant surprise for me. It’s charming, plays great, and has real legs. The devs understand what makes roguelites so popular. That “one more run” mentality where those runs aren’t too long, feature a lot of variety that you can control, and they feel good to play. As this is finally on Game Pass it’s an easy recommendation no matter where you can play. Unlike Indiana Jones fans, this is one skull you shouldn’t avoid

I played a little of this last night before hoping onto Skyrim. Changing different heads which give you new attacks and abilities is a neat mechanic. There was some ninja skull in the trailer which I thought looked cool. I’ll have to jump back on this later.

I played a little of this last night before hoping onto Skyrim. Changing different heads which give you new attacks and abilities is a neat mechanic. There was some ninja skull in the trailer which I thought looked cool. I’ll have to jump back on this later.

There are some great ones, including characters from other indie games that are super fun to play as.

Nice review from the roguelite expert!

Looked nice, but not my jam so to speak.