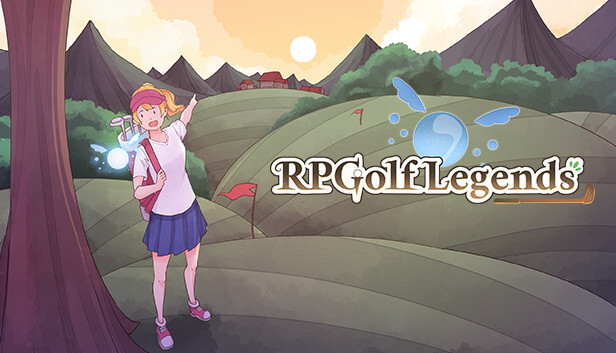 The following game was reviewed on an Xbox Series X and Windows PC.

In gaming, it is not too uncommon to find weird mashups of genres. As a matter of fact, I welcome them with open arms, because that is how new gaming niches and very popular franchises are born. RPGolf Legends, developed by ArticNet and published by the gaming veteran KEMCO, serves to do just that: by merging RPG gameplay mechanics alongside golfing. A combo that works better than you would think, but also does not quite hit the mark.

The story sets up the genre mash-up in a reasonable and unsurprisingly JRPG-ish way. In the land of RPGolf Legends, the player assumes control of Aerin, a young lady who, like the masses, wishes to golf freely. Yes, everyone is a golf-obsessed maniac in some way, but no one has been able to golf at the many courses throughout the land, ever since an ancient evil has sealed them off. That is until Aerin meets Clubby, a golf club-fairy thingy, that is set on restoring balance to the world and opening the golf courses back up for the world to enjoy once more.

There is not much to write home about with the story, or its characters for that matter. But it does the job of giving the player a reason to use their golf club as a weapon. The gameplay loop is fairly simple: beat up enemies until Clubby’s power meter is full, unlock and play the golf course, rinse and repeat. There will be things that occasionally get in your way, such as boss fights or quests, but that’s how the game will play for most of its playtime. There are some side things to do, such as fishing or quests given by townspeople, but doing them is not necessary. They exist to make gameplay just a bit easier when facing enemies or golfing.

As far as genre mashups go, this is not too shabby. The golfing mechanics are simple yet surprisingly well-thought-out. You will have to take into consideration where to hit, how hard, and the angle at which you swing at the ball. But you also need to keep an eye on wind speed and direction as well as the type of ground that you are standing in, meaning that hitting the ball as far as possible is not always the best decision to make. Throw in unlockable tournaments and this is easily the best part of the game.

Unfortunately, I cannot say that about the rest of the game. Regarding the combat, it is simple enough that even the most casual gamer can understand. One button to hit, hold it to use an ability, and another button to block. Battles are ARPG in nature, and all I can say is that I did not find this fun. Combat is not difficult, but it did feel like it got in the way of the one thing I liked about the game. There are other classes the player will unlock as they progress through the game, changing combat up a bit, but it really did not do much for me.

I felt this way with most of the game’s mechanics to be honest, as I did not find much of the questing nor the exploring to be very interesting or rewarding. I also felt the game’s overworld to be uninteresting and larger than it had to be, with not much to be found besides coins, enemies, and breakable grass slash crates. You can rent a golf cart to get around faster, but four wasp stings will break the thing and, disappointingly, it cannot be used to attack the enemies in your way.

Despite that, the game’s visual is quite nice. The color palette is bright, grass and water sprites animate to make for a very visually pleasing 32-bit 2D gaming throwback. The music is quite nice too, and I quite liked much of the town and overworld ambiances. Sadly, there is not much audio to the game, such as town ambiances or enemy sound effects, and the game can feel empty as you traverse the world.

There are multiple language options, and both the combat and golf have settings to aid you just in case you are struggling. The game is also Play Anywhere enabled and runs on even the weakest of laptops, such as those with integrated Intel graphics chips. Easily a game you can take anywhere with you for some golfing fun. Although I would consider rebinding the PC controls as I personally found them to be a bit unintuitive.

RPGolf Legends is a fun golfing game, but during my time with it, I wished it was just that. I do not think the genre mash-up is bad, mind, but the execution could have been better. I did feel that, had the combat been turn-based, I might have engaged with it more. And maybe if the towns and overworld had more characterization and offered loot of sorts, I would have spent more time questing and roaming about. For the 2D RPG enthusiast, I would recommend this game, but at its current price point, I would have to do a double bogey.