Police Simulator: Patrol Officers is a weird fever dream of what Europeans seem to think being a police officer in America is like. It’s an ugly, broken, infuriating slog of a game that takes the serious act of upholding the law and turns it into a series of meters to worry about.  This is one of the worst things I’ve ever experienced on my Series X or on any system for that matter. 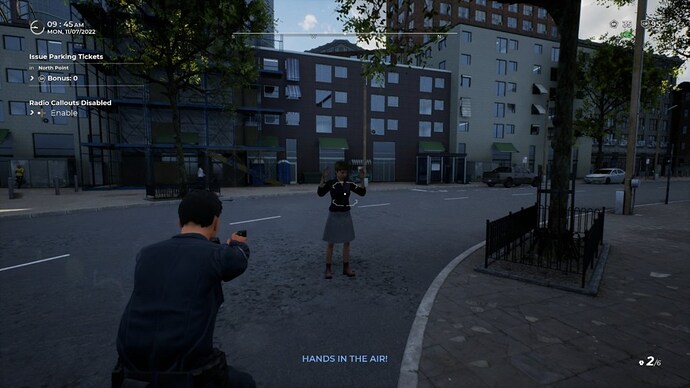 Police Simulator takes place in the fictitious American city of Brighton. It doesn’t look or feel at all like an American city, though. If anything, the layout and look of the city remind me of any generic layout in an Original Xbox or PS2 game. It’s really ugly, has a constant haze that obscures your vision at certain times of day, and is home to an incredible number of drunk drivers. First things first though, you’ll begin the game by choosing from a preset of Officers and choose either casual or hardcore mode. Casual lets you mess up and just “have fun” a lot more, with hardcore mode being a much tighter and lawful affair.

Things start out slow with you on foot and choosing to either give verbal warnings or tickets to people littering, jaywalking and the like.  Controls are as basic as it gets for movement, and you toggle between run and walk. This toggle leads to hilarious running-in-place animations if you just slightly move the analog stick while in run mode. For all policing actions, you’ll use a radial selection menu which was easy enough to grasp after a short while in-game. As you progress more and more serious crimes will present themselves. A short while in I had my first runner which required me to pull out my taser and point it at the suspect to get them to stop. Sometimes even this isn’t enough, and you have to shoot them otherwise they’ll run out of your area of patrol, and you’re immediately fired if you chase after them, fun!

You do have a pistol and can pull it out at any time. Using it though is reserved only for life-threatening situations and as far as I can tell will instantly end your career and force you to restart the day when used otherwise. None of this gameplay ever feels good. Movement feels more like skating, aiming is a chore, and whenever you’re talking to someone on the sidewalk you can expect dozens of the same-faced NPCs to constantly walk straight through you. It’s just an enormous mess all around though you do have the option of playing in co-op to laugh at it all with a friend. 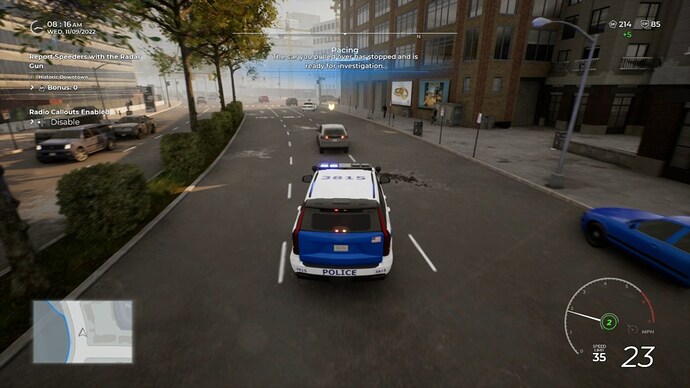 It’s All So Janky

Each shift allows you to set a timer and at the end you’ll earn experience points. Every part of the city has its own experience system tied to in-patrol challenges and the more experience you get the more you can do. It is the heart of the game, going through each section of the city and running through the exact same crime scenarios dozens of times per shift. There isn’t a large number of criminal offenses with many of them all looking the same but with slightly different reasons. Being told “the suspect is looking nervous” can mean they have drugs or maybe illegal weapons on them. “The suspect is red-eyed” often means they’re either drunk or high and so on.

After not very long you’ll get your patrol vehicle which controls terribly like everything else. This opens up the driving under the influence part of the game, and Brighton is a city full of drunkards with a need for speed.  In one shift I found and correctly arrested 15 drunk or high drivers in 35 minutes. After handcuffing the suspect, you can call in for backup to bring them in while you call for a tow truck. The pathing system for vehicles in the game is terrible and routinely broke so that 15 or 20 cars were just stuck in the road blocking the way for the tow truck.  The game has a solution for this though as the tow truck’s car lifting crane will simply stretch 50 feet in complete defiance of the laws of physics as it snatches the offender’s car. The jank is real in Police Simulator: Patrol Officers. In fact, it’s the only part of the experience that made me have any type of fun. Eventually, it became a game of just how much I could break everything with any thoughts of upholding the law being far down on my list of priorities.

Graphically nothing looks good, though it in general does seem to run around or at sixty frames per second. In certain areas like the bigger police stations, the framerate can drop to a crawl. There are randomly selected times of day for each of the city’s areas and the hazy fog-filled ones felt terrible in comparison to the bright sunny days. It’s all butt ugly, from the dollar asset store-looking character models to the road textures, buildings, and road signs. I would believe if you told me this game was running in back-compatibility mode and was originally on the 360 with an uncapped framerate.

Sound-wise it’s no better. Your officer and the NPCs are all voiced and sound like robots. There is little to no music and the ambient noise barely exists. Nothing about the game is competent. It’s all either subpar or truly terrible. Bug-wise most game systems broke often with only the radial choice menu seeming to be stable. Cars would often disappear as would people, and the pop-in on objects in the environment was a never-ending thrill ride of “will that trash disappear once I’m 10 feet away or 15!?!? 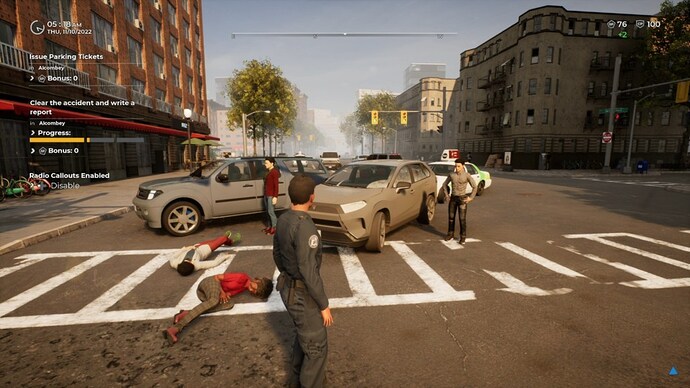 Police Simulator: Patrol Officers has zero redeeming qualities. It takes a serious position, which has had a lot of public issues since its inception in America, and makes a truly awful game out of it. If you love the idea of playing hall monitor and giving people tickets for jaywalking, find something else. There is no fun to be had here in this ugly broken mess of a game.

Heh, why is crap like this even made? Good review!

Ooof. I’ve seen other recent reviews sharing the same critiques of this title.

I’m curious as to how this game made the rounds to the console sites. I can’t imagine this was on anyone’s ‘should review’ list.

I find it very odd that there are plenty of ‘very positive’ Steam Early Access Previews. I know everyone has their own tastes and all, but I have to question the legitimacy of those Steam ratings [graph shown below].

Game of the year right there, folks!

Yeah, for who exactly is this made and especially…why?

…Ooof. I’ve seen other recent reviews sharing the same critiques of this title. I’m curious as to how this game made the rounds to the console sites. I can’t imagine this was on anyone’s ‘should review’ list. I find it very odd that there are plenty of ‘very positive’ Steam Early Access Previews. I know everyone has their own tastes and all, but I have to question the legitimacy of those Steam ratings [graph shown below].

I got an email from the PR company the publisher uses asking if we wanted to cover it. I felt compelled after looking at the trailer.

I actually bought the game as something fun to do drunk on weekends. If you come into with low expectations it is kind of fun.

Game of the year right there, folks!

**Yeah, for who exactly is this made and especially…why?**

There was a surprisingly decent series of police car games for 360 after the famous German tv series ‘Alarm für Cobra 11’. I think they were called Crash Time in other countries. Lower budget games but they looked rather good and had better crash physics than most modern switch games like Police Simulator 2.