Late into the PlayStation 2’s lifespan came an onslaught of titles that are still talked about today. From hardware crunchers like God of War and Final Fantasy XII to unique offerings like Ōkami and Shadow of Colossus, Persona 4 would sit up as one of 2008’s best releases for the console. Improving on the mechanics offered in Persona 3 and offering a cast of fun characters, ATLUS would spin off this particular game for the next several years. One of them would be Persona 4 Golden (“P4G”), an expanded release of the original game exclusively for the PlayStation Vita before later being ported to PC and now on the Xbox platform.

Additions to P4G, like Persona 5 Royal, come bundled into the main game and include alterations to the story, a new character and dungeon, gameplay balance changes, and a lot more. This version of the game is the definitive version of Persona 4 which I already consider a fantastic game in its own right. Starting off the game, you come to the town of Inaba to live with your uncle for a year, and not at the best of times, either—a series of murders have been rocking this little town and you find yourself smack-dab in the middle of it all when you find a whole ‘nother world behind the confines of TV.

Clear the goop off the ‘change channel’ button cuz you’re gonna need it.

Persona 4 Golden, like other games in the series, are part life simulation and turn-based dungeon crawlers. What players do in the former will impact the latter, such as forging bonds with the locals and your party members to strengthen yourself and better outcomes of getting stronger Personas to do battle with. The core of this turn-based game is to build yourself an array of Personas to protect against and exploit the Shadows’ weaknesses—the enemies you’ll be running into a lot. Do that and you’ll get free turns, because letting the enemy have their turn can mean a total party wipe.

You can’t just forge bonds willy-nilly either because you are on the clock. Between school life, self-improvement sessions, and mandatory story beats, you’ll need to plan out how you go about your days if you want to see the stories of your favourite characters or better yourself for future battles. This is also a primary way to level your social stat, which will allow you to do particular actions or meet up with specific people if you meet their conditions. It’s also important that you complete the main scenario in time: by saving the person from the ‘Midnight Channel’ for reasons you’ll need to see for yourself. You’ll have the opportunity to explore alternative endings as well, so keep an eye out for potential junctions.

The dungeon crawling is done by entering the world of the TV, where whoever is starring on the Midnight Channel molds the dungeon to their desires and, most importantly, who they really are but keep repressed. These locations are more personal than the floors found in Persona 3’s Tartarus as they reflect the person stuck within, but floors are still mostly randomised unlike Persona 5’s palaces. Battles take place once you’ve caught up with an enemy (or if they’ve caught you) and rewards can yield you plenty of valuable assets through shuffle time. I definitely prefer Persona 4’s implementation over Persona 3’s as you can select a handful of cards as opposed to timing a button press.

Oh, and in these dungeons, you can also call for help with the SOS function. I’ve tried to use it but I’m not sure what it does and frankly speaking, you’ll never need it. The game isn’t difficult and custom difficulty is supported and can be changed whenever you like. But as long as you keep fusing Personas you collect, you’ll be alright. Heck, you’ll be right at home if you enjoy monster slash demon collection. 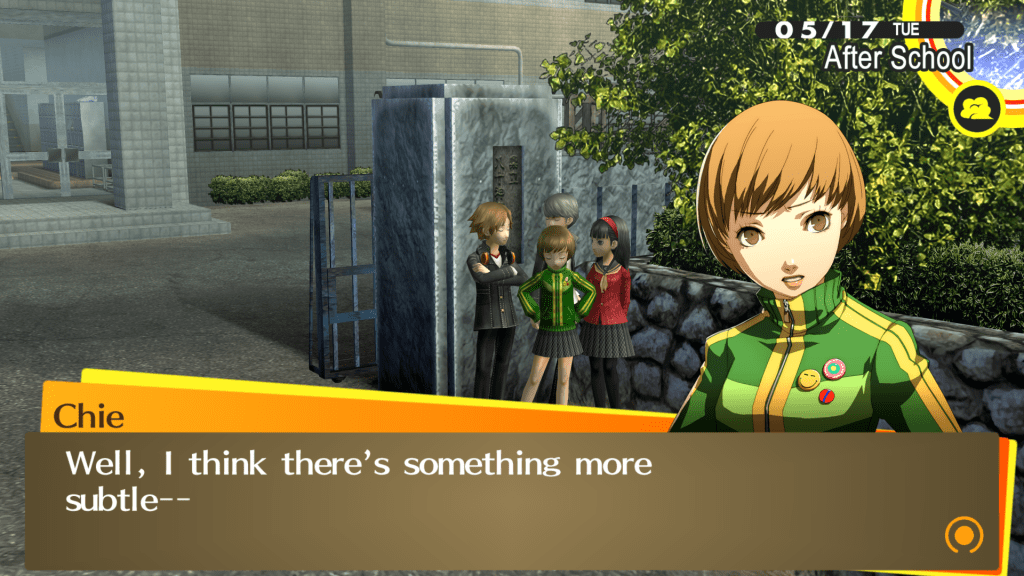 Be True to Yourself

As I alluded earlier, Persona 4’s main shtick is taking characters with desires and frustrations they are embarrassed of and putting them on full display. As you progress through the game’s story, you’ll learn more about the dinky little town of Inaba and its residents and I did enjoy learning of their plights and could sympathise. Learning about the Midnight Channel with the colourful cast of characters is really fun, even if I feel that Golden’s additional character Marie and her dungeon aren’t worth the effort to get to. The setting is also very comfortable, and I just love that backwater town feeling that oozes out of Inaba and its residents. And although I wasn’t impacted by the narrative as much as I was by Persona 3’s, it’s still an enjoyable romp within the context of its world.

Over the years I’ve had folks tell me that this game has added more bloat to the original, but I disagree—I feel the content is justified and you’ll end up clocking in well over 50 plus hours anyway. You’ll find the mystery intriguing, but if you don’t, you’ll have plenty of interactions between party members and townspeople to keep you interested. And if that doesn’t interest you, the gameplay loop of dungeon crawling, Persona collecting and fusing, and weakness exploitation (and fun boss fights) will keep you coming back. Especially when all this is accompanied by Meguro Shoji’s energetic and fast-paced pop score—nearly 15 years later and it’s still a treat to listen to.

It’s also worth mentioning that you can now choose between English and Japanese voice acting, which as far as I’m aware, wasn’t available on the original Vita release. The game also hits a smooth 60 frames per second (and beyond!) and visuals are significantly sharper than they were on handheld. This is the definitive way to play one of ATLUS’ best games and Play Anywhere ensured smooth save transitions between my Xbox and PC. For twenty whole dollars this game is simply a fantastic deal, and one I can easily recommend to any Xbox player, JRPG fan or not. It’s launching on Game Pass too, so there’s no excuse.

After all these years, this game still holds up. Hold the lattes for a few days and pick up Persona 4 Golden—you won’t regret it.

Just wondering if you know whether or not the Steam save files are compatible.

Just wondering if you know whether or not the Steam save files are compatible.

Haven’t tested it though. 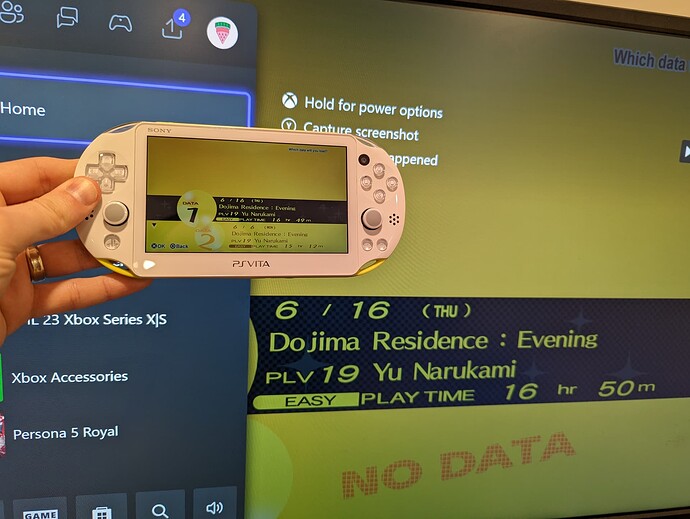