It was a little over ten years ago when I first picked up a Persona game, Persona 3 Portable (“P3P”) to be exact. Developed by ATLUS’ P-Studio and now published by SEGA, this version of one of the PlayStation 2’s highlights was developed for the PlayStation Portable and does exactly what it set out to do—try to fit the original Persona 3 experience onto the handheld’s 1.6GB proprietary UMD format, while also offering a new experience by implementing a new female protagonist option to convince returning players to pick up the game.

Although I picked up P3P first, I had actually stopped playing it to play the game’s ‘definitive’ edition, Persona 3 FES, and would later come back to P3P during my commutes. So, to see this version of the game coming to consoles, and particularly Xbox platforms, for the first time is bittersweet. Not because of what Persona 3 is, but because of what’s missing and how that impacts the original experience of the game.

Now don’t get cold feet—Persona 3 is a fantastic game and is, in my opinion, one of the best in the series. What Portable gives console players frustrates me, but that doesn’t change my opinion on the game. A mash up of dungeon crawling, social/life simulation, and demon (monster) management, Persona 3 blends these experiences into this perfect and unique JRPG that I can recommend to just about anyone. Its storytelling left its mark on me in ways future Persona entries never did. I love Persona 3 and that’s why this Portable release leaves me middled.

The story of P3P has the player assuming the role of either a male or female protagonist, enrolling in Gekkoukan High in the fictional city of Iwatodai. As the player makes their way off the late-night train and to their new dorms, they notice that their world is just a bit weird—the moon has turned mucus green and coffins float without reason. But like most normal people, you shrug it off and continue to your dorm. Entering the building, you sign a contract by a strange little boy rambling on about the end of the world and not a moment later a girl with light-brown hair runs right into you, a gun in her hand.

Persona 3 is all about its moment-to-moment interactions with the main cast of characters, side interactions and social links, and its main story. In this world, there is an extra hour known as the ‘dark hour’, where ordinary people become coffins and anyone outside of them become food for Shadows—dark entities that wander about and your primary enemies throughout the game. The player character awakens to their powers and, overtime, strengthens their bonds with friends, partners, and strangers alike which will be key in exploring Tartarus. Tartarus is this giant and hideous tower that replaces the school building during the dark hour, and at night your entourage explores this place in hopes of finding answers to this mystery.

As a student, you have a lot of free time, but it needs to be spent wisely. Who you meet up with after school to increase your bond level, whether to study for exams, and especially when you want to explore that hideous tower. As someone who is able to wield multiple Personas (your ‘power’), some bonds will offer bonuses to Personas of different types. Getting some of these bonds to occur may require you to improve your social stats and improving those takes time. Said time is limited as each full moon brings about a boss that you need to prepare for and that’s done by going to Tartarus and grinding away at floors. Spend too long in Tartarus and you’ll get tired or sick which will impact your future ventures into the dungeons. Spend too long on a floor and you’ll run into a freaky boss that’ll have you scrambling out in no time. 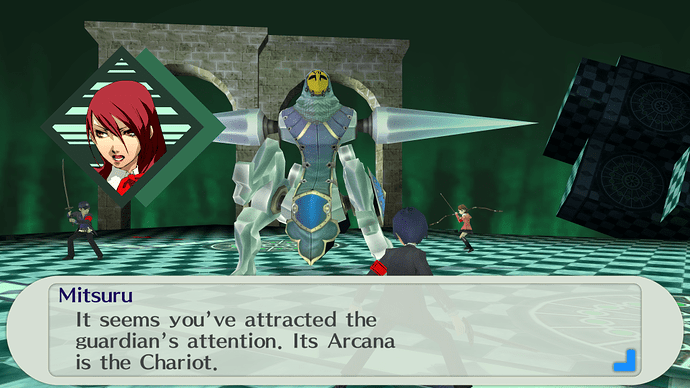 How this game combines its life simulation and its combat in conjunction with a limited timeframe is just so good. It puts a lot of weight on what you should be focusing on during your downtime to make battles against shadows easier. Ultimately, your goal is to get to the top of Tartarus but it’s so easy to get lost in someone’s bond story or your own personal goals such as leveling a social stat. And then there’s fighting in Tartarus and collecting new Personas to eventually fuse together to create even stronger ones for the challenges ahead. Neglect that and you’ll find yourself in quite a pickle, even with all the equipment you get for yourself and your team.

Battles against shadows are turn-based and finding your enemy’s weakness is key and that’s because exploiting weaknesses gives you a free turn. Each of your party members have their own Persona that they can summon and have their own particular elemental affinity, which will cover you in the event that the Persona you’re using doesn’t have the right skills to do the job. Of course, this also means that shadows can exploit you and your team’s weak points and, in turn, netting them an extra turn to one-hit kill you with a random critical. After all, it’s not Shin Megami Tensei if you don’t die to random chance.

I think this combat system is a lot of fun—finding and taking advantage of weaknesses helps keep the pace of battles quick and you’ll know if you’re just not ready for a fight. Just make sure you never ever let your party members act freely and you’ll find that grinding away in Persona 3 isn’t bad at all.

What I love about Persona 3 is how it tells its story. Characters don’t just develop in their social bonds like future games do but alongside the main narrative, as you’ll see them become frustrated with their situations and one-another. The atmosphere is tense and bleak but there’s just a bit of hope—the themes that this game conveys and how well it does it make it one of my favorite ATLUS games. You won’t see many of its story beats in gaming today and even from the company’s later releases. The game’s music is phenomenal, featuring Meguro Shoji’s signature blend rock ‘n pop but with that early 2000s underground flair alongside piano compositions that greatly complement the game’s narrative.

I think I’ve firmly established Persona 3 as my favourite game in the series and why I can wholeheartedly recommend a playthrough. But unfortunately, I have to face the uncomfortable truth and that is what Persona 3 Portable strips away from the original releases. Due to the PlayStation Portable’s storage medium capping at 1.6 gigabytes, the once grandeur Persona 3 had to be stripped down to the bare minimum to run. That means no more fully animated cutscenes or explorable 3D environments of Iwatodai. Weapon types for the main character have been reduced to just being able to use the sword. Gone is the epilogue found in the FES version of the game.

When you play P3P, you are playing a game that was designed to be played on the go. But now that it’s on console and PC, I’m less forgiving of the shortcomings. The lack of cutscenes were replaced by very rudimentary visual novel scenes that pan the camera on what are now very low-resolution images. Losing the ability to explore the world outside of a cursor and icons makes for a less immersive experience. No more weapon types aren’t the end of the world, true, but now you have less options to tackle enemies. And while some might not be fond of The Answer, that’s a good chunk of alternative content that is no longer accessible. Adding the option to play as a girl is a nice addition but it simply isn’t enough to change my mind: Persona 3 Portable is an inferior experience to the original. 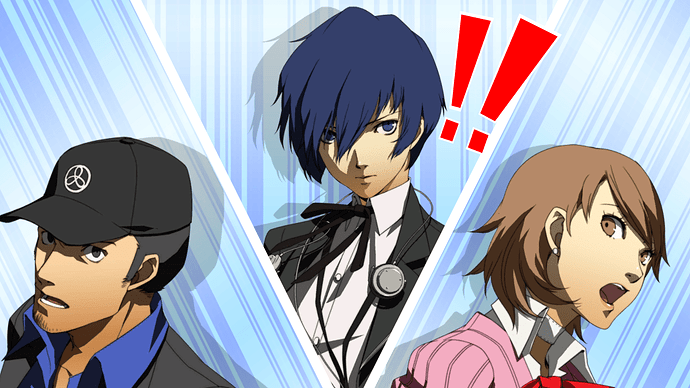 But all that doesn’t make this a bad game. Persona 3 Portable is still a good way to experience what made that PlayStation 2 game so special. This port adds some new features, too. Namely custom difficulty options that can be changed on the fly, new language options, and a quick save feature (not needed for Series owners). Dual dubbing between English and Japanese, too. PC controls are fine, but the UI is a bit cumbersome to browse. Play Anywhere works great, per usual, and I loved how I could jump between my console and laptop when I was out and about.

For Xbox players, Persona 3 Portable is an amazing game. And despite this version’s flaws, I implore you to give it a go.