NORCO was developed by ‘Geography of Robots’ and originally released on PC and macOS in March of this year.  Eight months later it has made its way to consoles and has been included in the current library of Game Pass titles.  This niche old skool point-and-click adventure game is not exactly expensive to buy at £12.49 but will undoubtedly receive a lot more interest via the subscription service than it might have received otherwise.  Having garnered generally positive reviews on PC this game already has something of a reputation so let’s see if that praise is justified in the XboxEra review of NORCO. 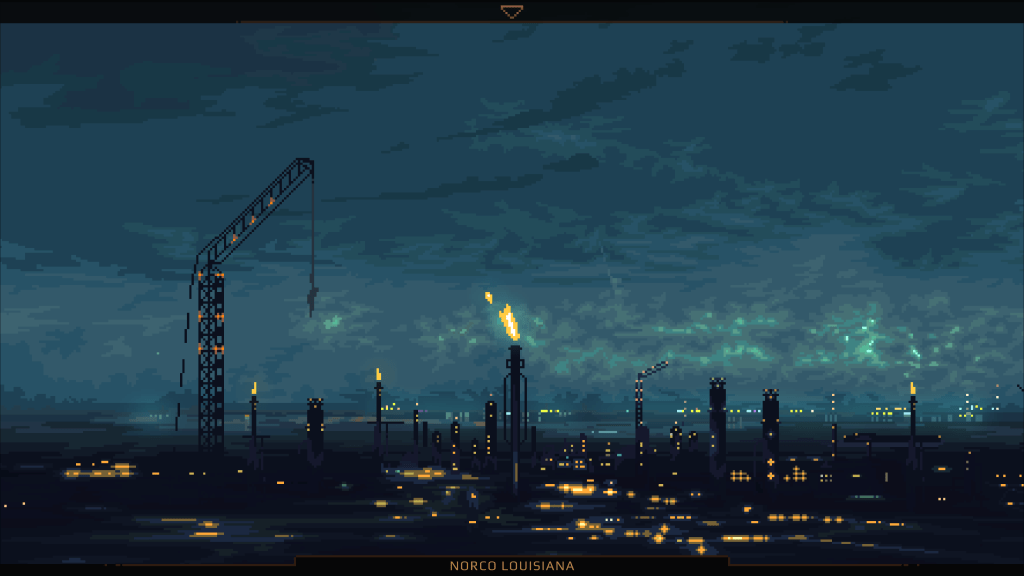 This review will be spoiler-free as usual but the basic premise here is that a woman returns to her hometown in southern Louisiana after her mother’s death from cancer.  Learning that her troubled brother is missing she journeys from the suburbs to the rotting swamplands via a landscape that includes a decaying mall and giant petrochemical works as she attempts to find him.

Entering a gothic heart of darkness she comes across a range of characters that she has to interact with in order to work out what her mother had been investigating shortly before her death and the possible links with a local refinery where large industrial accidents have occurred in the past.  Where the game ends up is something else altogether but more about that later.

What are we looking at?

The game is presented in a style that is well-established in adventure games but the big difference here is the pixel art visual design.  It is strange to admit that even a petrochemical landscape can be made to look magical using this type of approach.  Other games with a similar aesthetic such as Backbone are blown out of the water by what has been accomplished here. 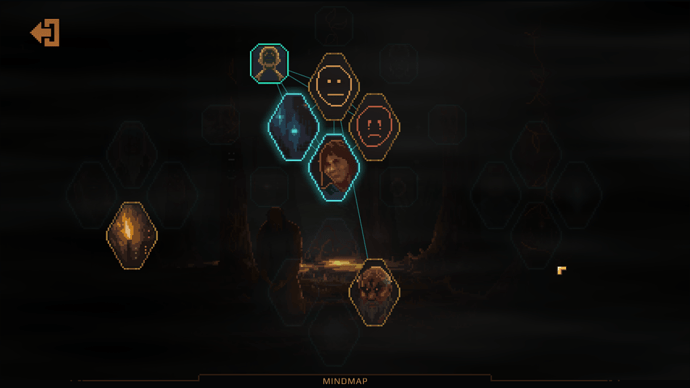 Trains rattle past while a woman’s disembodied eyes peer down from the sky above, a woman and a robot take a trip on a motorcycle and a shadow puppet Alligator performs in a street theatre and it all looks stunning.  The fact this has been achieved using one of the most basic forms of presentation possible is praiseworthy.

Having an electronic soundtrack in an early eighties style was (I must admit) one of the reasons why I chose to review this game and as expected it was the highlight of my experience, even outdoing the impressive graphical presentation.  If you have ever seen the film ‘Risky Business’ the soundtrack by Tangerine Dream, particularly during the train sequence is what I was constantly reminded of.

Moving from location to location I interacted with people, took on tasks for them and upon completion was rewarded with knowledge that could eventually be tied together using a ‘Mind Map’.   Questions posed within this area could eventually be answered through the linking of different people and information gained about previous events. 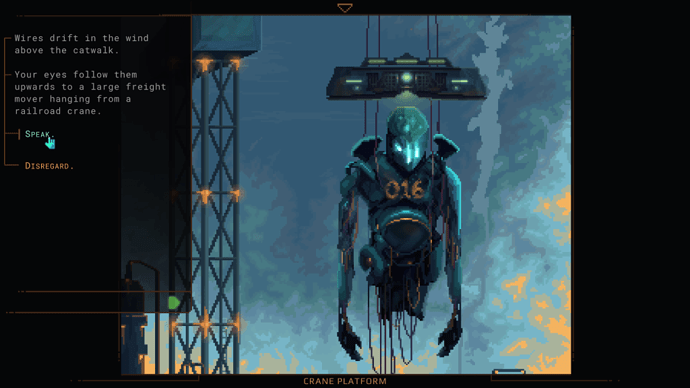 The gameplay is presented from the perspective of two different characters over three acts.  Both have limited inventories of items that are discovered and then used to progress but the most important of these is a mobile phone.  As well as containing background information in the form of texts this is also used to hire taxis to traverse the map and to take advantage of a couple of truly unique specialist apps as the story progresses.

What is coming next?

QTEs pop up regularly during the journey (including during boss battles) and all manner of surreal mini-games and puzzles have also been crammed into NORCO.  If you have ever wanted to pilot a small boat through swamps to dive for hidden portals this is your chance.  Climbing stairs to the correct floor and shaking hands with strangers in the dark is the basis of one puzzle and if you think that sounds weird that’s because it is.

The overexcitable cat challenge was my personal favourite and I am not even going to explain that one here.  Sometimes I did wonder what the game designer was smoking when they came up with this stuff but it is certainly unique.  On a similar subject, one particularly bizarre achievement that I stumbled across involving a toilet was like nothing else I have ever witnessed in an Xbox game. 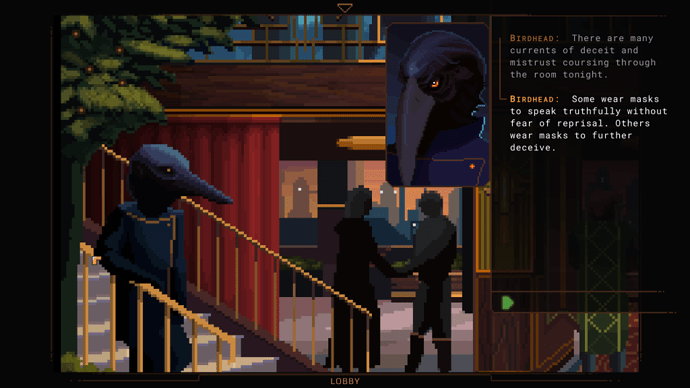 The story is presented as a modern-day noir and presented me with an intriguing mystery playing out within the confines of a decaying landscape.   This was an interesting experience for the first two acts, as the narrative twisted and turned and I was unable to tell what type of mini-game I would be presented with next.  Then things changed.

What is going on?

Clever writing is always welcome but sometimes it goes too far, almost as if it has become self-aware of its cleverness and loses the plot completely.  After starting with a level of randomness that could be compared with the original series of ‘Twin Peaks’ by the end of the game that level was off the scale like a Nineteen Sixties LSD-inspired B Movie.

After the first two acts concerning missing people, robots, detectives, monsters, pirates, research, cats, dogs, the internet, heavy industry and environmental damage, by the third act, all meaning is lost in confusing quasi-religious claptrap.  I guess I got the ‘bad’ ending considering the finale I experienced but if there was any message to be gained from the story it was certainly lost on me. 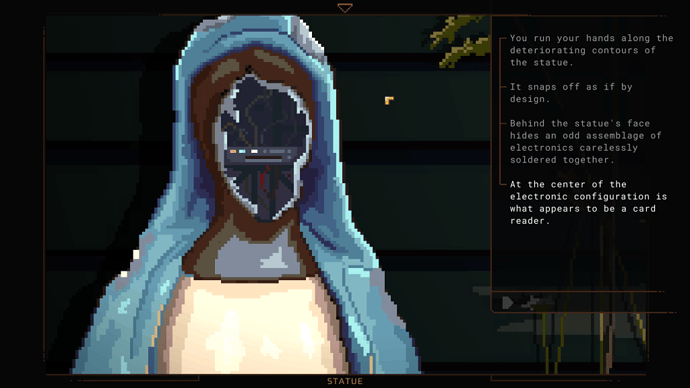 The game got so heavy going that I had to play the final third in small chunks as it had become such a slog.  The pretentious nature of the writing changed my opinion of the story so much that I was bored and indifferent by the time it finished and I can honestly say that I was glad when it was over.

After all, it is very hard to be interested in a character when you no longer like or have any empathy for them.  The annoying vocalisation effect used throughout the game did not help matters either.

I have no doubt that some players will absolutely love NORCO, but I am sure that an equal amount of people will have the same experience as I did (if they can bear with it until the closing titles.) 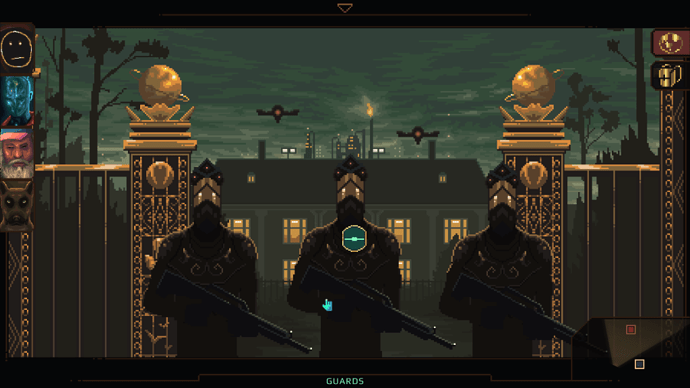 In conclusion, NORCO is a bit of a mixed bag.  Whilst it looks and sounds stunning it is let down by a story that pushes itself so far out there that it has no way of coming back.  Although already critically acclaimed this could be one of those games that is far more beloved of reviewers than the people who actually play it.  Only time will tell.  At least its availability on Game Pass means that it can be picked up and easily dropped if it turns out not to be your cup of tea.

This pretty much exactly describes my experience. Though, I played with the auto-complete gameplay setting toggled because I didn’t want to bother with minigames and turn based combat stuff however sparse it appeared.

Oh Damn, I just started act 2 and have been enthralled. The animations are creepily hypnotic and I have been loving the characters.

Sounds like its not going to stick the landing though.