A surprising email hit my inbox yesterday. Would you like to review the new Nickelodeon Kart Racers title, it releases tomorrow!  Being a glutton for punishment I said why not and spent the rest of my day playing the game. Featuring dozens of characters and tracks that star a heck of a lot of Nickelodeon properties the game is a hefty-looking package at first glance. They’ve even chucked in voice acting for the first time and boy do I wish they hadn’t. Nickelodeon Kart Racers 3: Slime Speedway attempts to morph the Sonic & All-Stars Racing games with Mario Kart and ends up being a pale imitation of both titles that costs $50, but it’s not all bad. 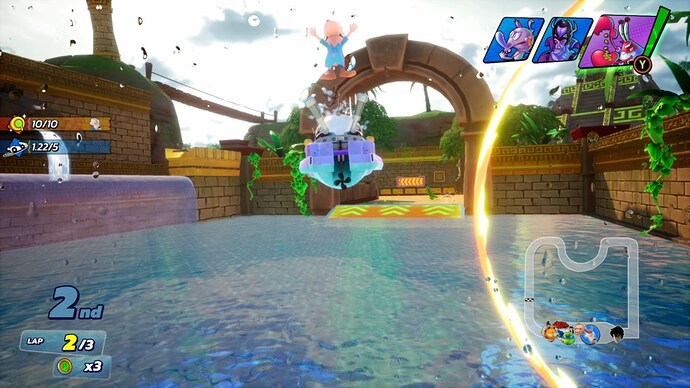 For the Love of God, Please Stop Quipping

The biggest thing here is the IP present as characters, tracks, and crew members, so let’s list it all first.

With more supposedly on offer as they touted “over 40 iconic Nickelodeon characters” in the marketing.

For crew members, there are over 90 and they cover three categories.  You have your Chief who is tied to your slime meter. To fill up your slime meter and go faster you need to acquire slime coins during a race. Once the meter is full you can use Y to unleash a chief-specific ability. There appear to be ten different Nickelodeon characters as Chiefs in total.  Next up is your crew engineer, they offer a passive bonus such as gaining a shield whenever you acquire an item and there is a very large number of them to unlock. Finally, you have your crew mechanic who offers up another passive from the same character pool as the engineers. You’ll choose from either a kart or a bike, then customize your tires, tailpipe, and paint job to match your preferred look and playstyle.

You’ll use these characters and vehicles across thirty-six tracks featuring a decent number of new ones alongside a bunch of returning tracks from previous entries. The main progression system is earning slime tokens after each race and spending them on whichever racer you want. The grind is real, and you are going to have to play a lot of this game to unlock everything in it. The modes are a mix of a few online ones that I couldn’t test as no one was playing yet and numerous mediocre offline ones. 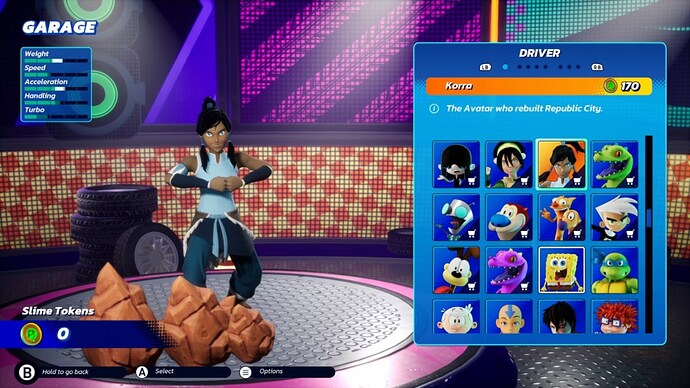 For the online modes, you have local and online options. Locally, you can play with 2 to 4 players in split-screen and when trying this out with four controllers the performance was surprisingly awful on my Series X. Constant judder and framerate drops made it difficult to both see what was going on and control my vehicle well. You have various head-to-head and more arcade/combat-focused ones available that I’ll get into in a bit.  For online, there is either matchmade or private races on offer, but as the game isn’t out yet I couldn’t get into any

It’s a decent smattering of modes, but none of them feel complete. Everything about the presentation of the game comes off as well-intentioned but lacking in the scope or budget afforded to the better titles in the genre. Finding out that the game costs $50 US at launch was shocking, as everything about this feels like a budget title.

The saving grace would have been a solid control scheme, but sadly there too the game feels off and unfinished. It’s a familiar setup with either right bumper or right trigger as your gas, left bumper or left trigger as your hop into a power slide as well as the trigger for performing stunts during a jump. A is used to activate any power-ups you drive over during the course of a race and the number of those felt small. I got the same few power-ups over and over again during my time with the game and outside of a weird bowling pin one that covered the entire track they were boring to use.

One constant source of frustration was the hop into the powerslide as it felt too loose and too slow to activate the slide itself. Physics are all over the place as you bounce wildly when hitting walls or magically make jumps you otherwise shouldn’t have by instantly teleporting back onto the track. Vehicles can turn into boats whenever you go over a body of water and unlike Mario or Sonic these transformations didn’t make the game’s handling feel any different. It ended up feeling more like a visual gimmick to me than something that actually changed up a race. 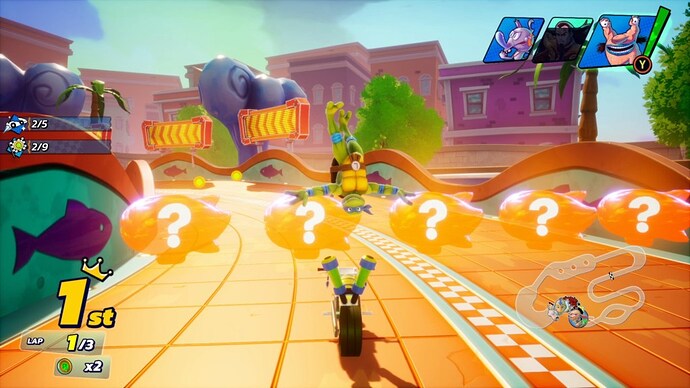 The soundtrack of the game is inoffensive at best. If any music from the Nickelodeon IP was used I didn’t recognize it, and the pre-race silence was odd. Once a race is going or you’re in the menus there is a constant and short jaunty tune playing that was always immediately forgettable. One of the big new features is voice acting for the first time in the series. Still, the soundalikes often sound nothing like their real-world counterparts and the constant repetition of the few voice lines available becomes frustrating after a few minutes. I understand that a smaller budgeted title isn’t able to even use voice clips from the shows without having to pay the bigger name actors but I ended up preferring silence and turned the sound off because of how poorly it was handled here.

Graphically the game looks clean most of the time, with decent texture work and a nicely varied track selection. What is shocking is for a game that looks like it could run easily on an Xbox One or PS4 it struggled mightily to keep a steady framerate for me on Series X. I’m not sure about the resolution but the sixty frames per second target was rarely hit mid-race when the effects were flying and it made things feel far worse to try and control. This title doesn’t look so good that it should ever struggle to maintain decent performance, so I hope it’s patched up quickly at or post-launch.

I didn’t run into any major bugs while playing but I did fall through the track a few times only to be instantly teleported back to it after a few seconds. 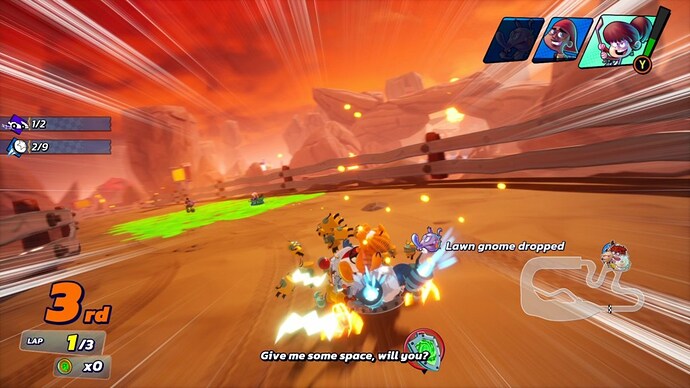 I simply cannot recommend Nickelodeon Kart Racers 3 at its launch price of $50 US. The controls are mediocre, performance is surprisingly inconsistent, the voice work is grating, and it’s a budget package on a nearly AAA price. 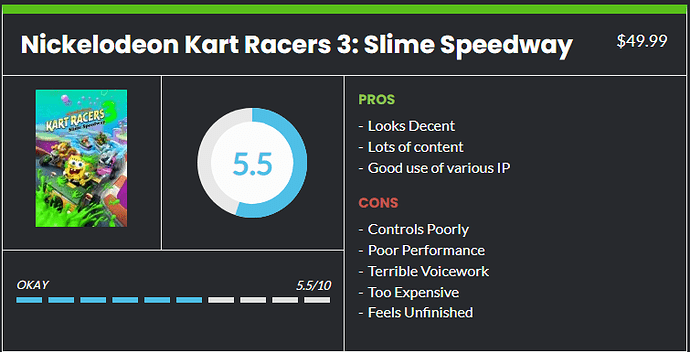