MADiSON is the first title from the incredibly named Bloodious Games. It’s been in development for a very long time with an original demo hitting over 4 years ago. There is a crazy killer on the loose, who is it, what do they want, and what is your character Luca’s role in it all? I’m not 100% sure because a patch completely destroyed my game just a day before this embargo. With that in mind,let’s head down this path full of catholic madness, the occult, and some of the most hilarious voice acting from a protagonist I have ever heard. 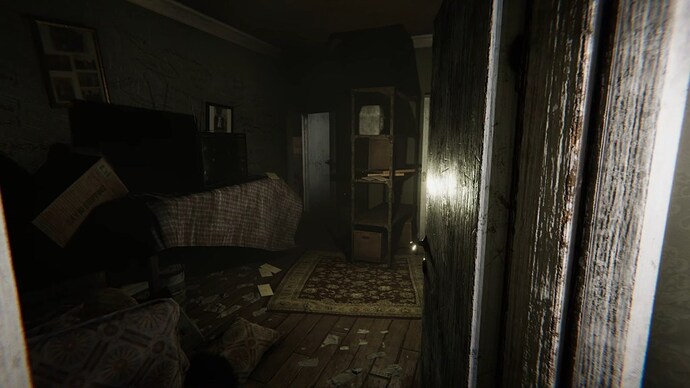 “Door creaks as you walk past it, the game”

Hideo Kojima’s PT demo has inspired a genre and MADiSON is firmly rooted in the “crazy things are going on in a small area first-person horror game”. As the aforementioned Luca, you can only do a few things in this house of horrors, the first is using your camera to interact with the world. Both in normal and hard difficulties you have unlimited polaroid film and if you’re ever stuck (and without guides, you will be) remember to shoot first and ask “how was I supposed to know to do that” later. Xbox code was not available for this title pre-launch, so I played through it on a decently powerful PC. Control-wise things felt heavy with both a mouse & keyboard as well as a controller. You move slowly by default, with a thankfully unlimited sprint available. You mainly interact with a few objects per room while trying to figure out what you should take a photo of. Taking a photo will at times lead to the game’s favorite thing, jump scares.

This is labeled as a psychological horror game but between the mediocre writing, predictable plot, and at times quite poor voice acting it isn’t. The only times I felt the hairs on the back of my neck raise up was during some of the well-done jumps scares. Harsh stringed music stings are effective alongside the brief flashes of potentially scary-looking individuals. Once you actually look at a still image of the game’s few character models though you can see why the choice to only shows them in incredibly brief flashes with non-stop strobing lights. They look really goofy and animate poorly. The environments on the other hand look quite nice. Featuring decent textures, a lot of detail, overall they are far better looking than the NPCs. The main house area does its job of making you feel like you’re in a place where a lot of bad things have happened.

Through either delusions or potentially time travel, I’m not sure because as I said at the beginning my game completely broke leaving me with only my hands and nothing else on screen, there is a variety to the locations as well which is very much needed. I wouldn’t be surprised if the first run-through of this game is at least 10 hours for most people because of one of the worst aspects of it, the puzzles, which is bad because it’s 95% of the game. 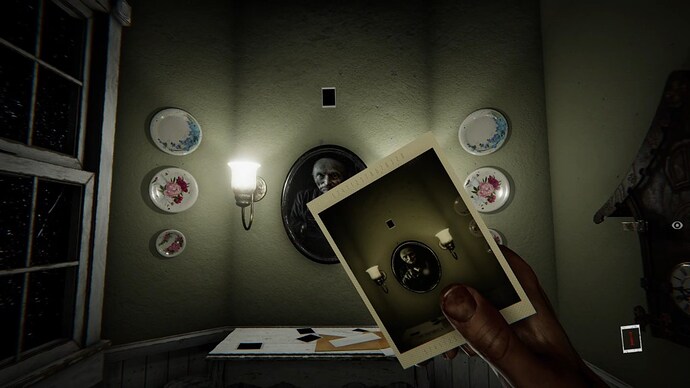 The puzzles in MADiSON aren’t terrible, the main issue is the lack of logic behind them at times. Far too often I found myself with no clue what to do for 30+ minutes at a time. Invariably the answer was “take a random photo of this thing” or “follow the roaches on the ground that you can barely see because it’s so dark”. I do think that bigger fans of the genre may be used to this more than I am, but the better first-person horror games were tough because they were legitimately scary and not just confusing all the time.

There is a limited inventory where you can have up to 8 items at any given time. With your camera, childhood journal, and photos you’ve taken always having to be on you along with certain puzzle solution items it’s more like an inventory of three to 5 slots at a time. There are a few safes in the game from which you can deposit and take out items and running back and forth to them can get tiresome after a very short while.

One aspect of the game that is both one of my favorites and perhaps the worst is the voice acting of the main antagonist. You can tell the voice actor is trying really hard to convey the horror that Luca is experiencing, but his tone and the lines he has to deliver made me laugh or cringe every single time. There are tapes you can find throughout the house that have actors more properly cast for their roles but even there the backstory given is constantly predictable and the writing feels flat. I felt like I knew where the story was going about an hour in and after 10 I hadn’t experienced a single real surprise. The main experience of the game is walking through the house and having non-stop ambient noises going off such as creaking floorboards, or items dropping to the ground to try and scare you into feeling like someone is there with you. After the 400th time of the same sound effect hitting as you walk past the same area the effect completely wears off, though. 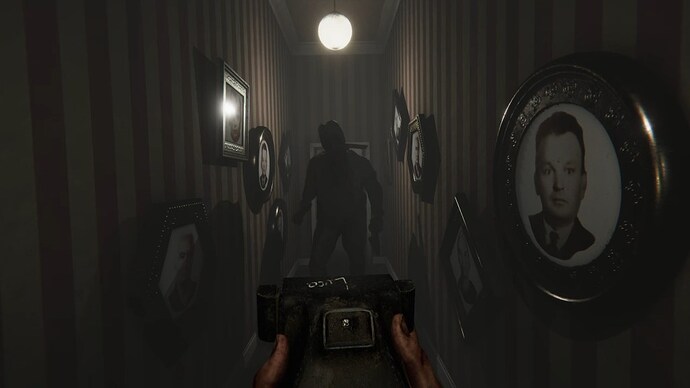 The only real music in the game as far as I experienced was the short hit of a music sting during a jump score or a slightly longer string-heavy sting during a “tense” encounter. There are a few actual enemies in the game, but the only ones I faced were of the “turn around and run” variety as there are no real gameplay mechanics outside of taking pictures or clicking on things until they do something. The game was constantly being patched as I played through with the initial 0.1.5 build being by far the most stable and best performing.

I was averaging between 150 to 400 FPS for most of my playthrough with that initial build but it dropped to 100-300 after patch 0.2.1. The final patch before the embargo hit completely broke my game, having only my hands render while holding the camera. This did net me a solid average of 2500 frames per second though! I had multiple crashes while playing and the game’s checkpoint system is not generous. I had to repeat multiple sections thanks to its complete lack of a manual save and reluctance to autosave as often as I would have liked. 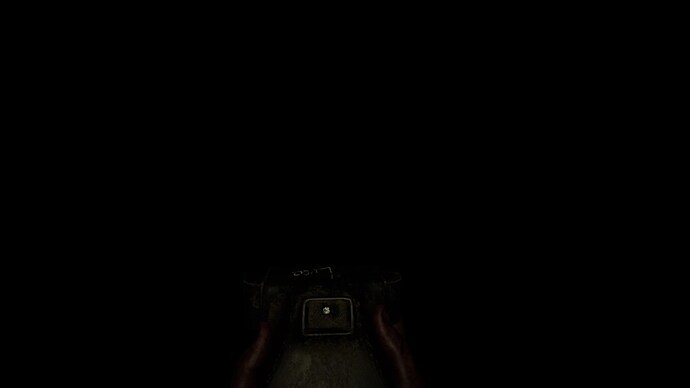 MADiSON is a psychological horror game without any psychological horror. It has jump scares galore, and at least on PC, it’s also a completely broken mess for me before launch. I’d advise taking a wait-and-see approach for both PC and Console due to all of these issues. Priced at $35.99 US it’s a steep cost for something that isn’t very good even when it’s working. If you love yourself a good horror game I’d give this one a little time post-launch, and take a look at it eventually on a deep sale. 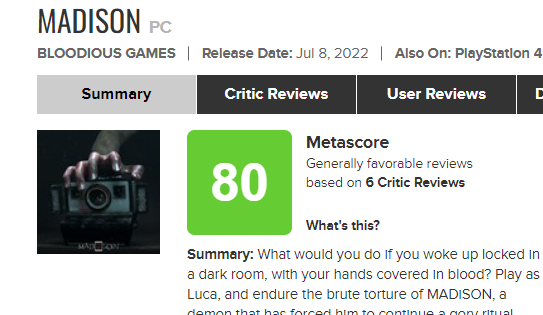 I seem to very much be in the minority on this one, I’m surprised. The entire time I was playing it I would never have thought it would get 9.5’s and 8’s all around to start with.

I seem to very much be in the minority on this one, I’m surprised. The entire time I was playing it I would never have thought it would get 9.5’s and 8’s all around to start with.

Surprised to see such high scores from some of those places. However you’re not far off from the PushSquare score of 50 on MetaCritic.

Is the FOV as horrible in the entire game?

That…is not how human vision work. I hate it, gives me motion sickness. Another reason to avoid this crap I guess, thanks for another great review!

I’m a sucker for these types of games so I pre ordered it, hopefully I like it more than the reviewer did. But I’m glad Xbox Era is doing these in depth reviews for games that are not super block busters

I’m a sucker for these types of games so I pre ordered it, hopefully I like it more than the reviewer did. But I’m glad Xbox Era is doing these in depth reviews for games that are not super block busters

Some reviewers have really loved it, a few of us haven’t. I hope you enjoy it!

My save file is still completely broken, but I looked up the ending on the game. Even if they fixed my game, if I saw that ending before embargo it’s staying at a 4.0 and maybe going even lower

Surprised to see such high scores from some of those places. However you’re not far off from the PushSquare score of 50 on MetaCritic.

I mean it has 6 reviews. Better to judge to score when it has dozens.

I mean it has 6 reviews. Better to judge to score when it has dozens.

I think it’s up to 12 on Opencritic, not sure it’ll get dozens

Ive only played a few mins as I heard it has some serious bugs that wipe saves. Ill wait for a few patches before I play anymore.