Underneath a thin veneer of mediocre platforming, decent combat, an at times off-putting story, and surprisingly wonderful music lies a creepy and uncomfortable art style. This weird sexualization of characters who both look like and by the game’s end appear to be minors gnaws away at the very heart of what is otherwise a decent, relaxed take on the Metroidvania genre. The title features mostly female characters, rarely fully clothed, who often transform into giant monsters with massive swaying breasts. I don’t have a slick intro to the main review, so uh yeah this is Lost Ruins. 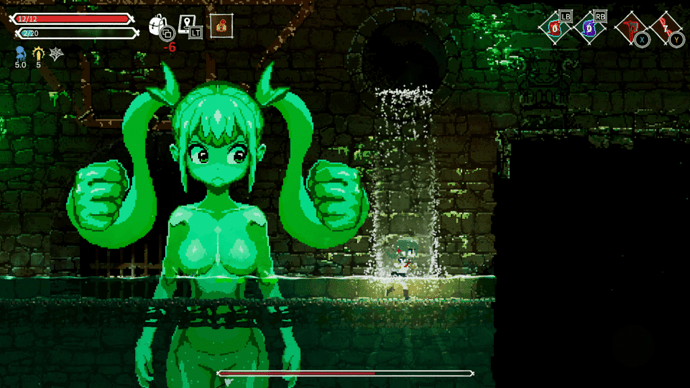 Originally a Kickstarter from South Korean developer Altari Games and published by DANGEN Entertainment which is based out of Japan, Lost Ruins is described by the devs as a survival action game. I take that to mean that they feel you will be required to constantly use menus to heal up, change out your spells, armor, and weaponry and that by default it can be rather difficult. It is certainly not a “survival” game as defined by the west. This is a pretty typical 2D action platformer with areas gated progression-wise by items you’ll find throughout your playthrough.

You are the “heroine”. Her memory is gone and her stomach is always showing no matter what angle she’s shown from. You’ll start viciously killing goblins before you meet up with a witch who helps you on your task to stop the summoning of the “Dark Lady”. It is the standard anime trope of a normal human being transported into a fantastical world with some amnesia thrown on top and little to no clothing for any ladies involved. Best I can tell, as stated in the intro, no one here outside of perhaps the witch you meet (who is more clothed than the rest) is close to out of their teens. You’ll run into various zombies, demons, undead, ghosts, and more as you work your way through a grid-style series of rooms. It’s standard fare with a mix of checkpoints and save hubs alongside teleporters that help you backtrack when you invariably find yourself stuck progression-wise.

Combat consists of two weapon slots, two magic slots, a jump (never a double jump though), and a generous combat roll. You will come across an impressively wide variety of weapons, spells, and wearable items that allow you to hone a playstyle that suits the area and your preferred approach. There are also relic items, the first of which… is a pair of “striped panties with noticeable yellow stains”. I was ready to quit the game after those came up, and maybe I should have because just typing that sentence renewed my anger. You see the boss that I defeated to get those panties, which for some reason gave me +1 on my inventory slot, belonged to someone whom it would appear is in their early to mid-teens at the most. The non-stop perviness really killed any interest I had in the story, and I pushed through the title more out of a sense of duty for this review than anything else. 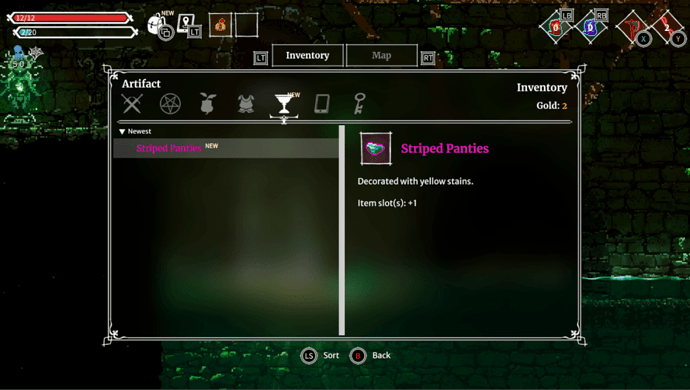 It’s so much more of a shame because the game looks nice, the sound is great, and I really did enjoy changing up my gear setups to match areas. The magic system feels far more powerful than the melee weapons but until you have a few specific items your use of it is also far more limited. Most attacks are really damned slow, and enemies are not. This did lead to a lot of frustration until I found a rather OP chain lightning magic setup that could kill most enemies in one or two casts. There are numerous difficulty options available, though the “true” ending of the game is tied to either playing on the hardest or making sure you never open a single chest in your playthrough. After completing the main story once you’ll unlock three more modes including one that greatly adds to the story (and gives a backstory that makes the sexualization of its characters all the worse).

Technically the game was fine. It’s not complicated, nor is it well balanced, but in my 5 hours beating it I never once ran into a bug or crash. At $20 this game is also overpriced. If you’re a 14-year-old and it goes on sale it might be worth spending an evening on, but not at more than $5 at the most. I feel the need to restate just how flipping good the music is.  If anything just load up the soundtrack on YouTube and imagine this in a game that didn’t make your skin crawl when you played it. 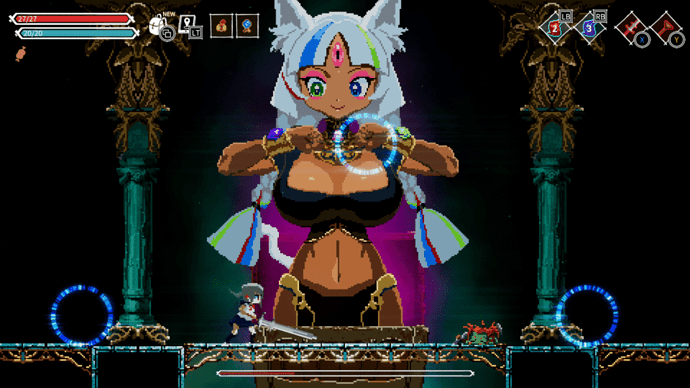 In a Very Bouncy Conclusion

Lost Ruins should be an OK game for fans of the genre, as it stands though if you play this game and are ok with its art style then as the zoomers would say, that’s sus. A fun gear system, rather nice graphics, and great music are massively let down by a paint by number, creepy as hell story. Technically I might have been interested in what this dev can do in the future, but God damn man. This game is gross.

Yeah this is obviously VERY creepy, but even in more normal games the sexist and creepy stuff is disturbing. It’s also a bit disturbing how it is somehow ok? Imagine a big western game with these things… Twitter would implode. I can’t help but think there is some sort of double standard in some places.

Yeah sadly South Korea has a huge problem right now with anti-feminism and mysogyny, so this issue will unfortunately continue.

Review is getting downvote bombed with plenty of rotten comments I’ve had to hide. Knew it would happen, but still annoying to see it.

Dangen published great games like Bug Fable or Crosscode. Somehow they found that this game is a good choice to publish. This game also managed to get past Xbox certification process, but games like Gal Gun failed.

And I’m fine with it, if the people depicted are adults.

My first thought was this maybe is the same developer of the game Momodora: Reverie Under the Moonlight

The art style and especially the “massive swaying breasts” on the enemies is what I remember from playing that when it was on Game Pass.

This is 6 minutes of you crying over drawings

The “Drawings” that you play reductionist on are vital parts of the game as a whole, and his complaints about them are even more valid when characters can be easily perceived to be underage. Those unnecessarily pervese drawings and creepiness of the writing combined are perfectly justifiable reasons to be uncomfortable with the game and thusly give it a lower score. I myself have 100% dropped games and anime over their egregious “fan service” and attitude towards women, as those actions are such a put-off that it makes it difficult to enjoy the rest of the game, no matter how good the other aspects may be, depending on the frequency of their occurrence. 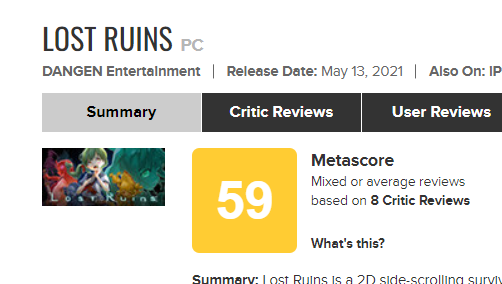 Still surprising how many angry messages I’m getting for giving this title a bad review, it’s simply not good even if you take out the other stuff. It’s a poor playing/unbalanced metroidvania

Still surprising how many angry messages I’m getting for giving this title a bad review, it’s simply not good even if you take out the other stuff. It’s a poor playing/unbalanced metroidvania