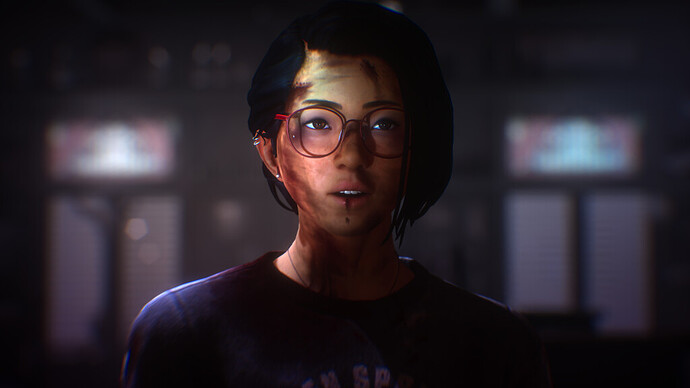 Originally released in September 2021 ‘True Colors’ is the third mainline title in the Life Is Strange series.  Unusually (and some might say mercifully) this time around, the standard five chapter game was delivered fully realised.  Lessons have obviously been learned from the heavily criticised release schedule of Life Is Strange 2, which was ridiculously drawn out and caused some players to lose interest in both the title and the franchise.  Having recently joined the roster of Xbox Game Pass there really is no better time to hang out with some angst ridden Millennials, so let’s swagger into the Xbox Era review of Life Is Strange: True Colors.

This time around we play as Alex Chen, a troubled young woman brought up in foster care after the breakdown of her family unit eight years before.  We join her travelling by bus to the incredibly picturesque Haven Springs, Colorado where she is to meet up with her long lost brother Gabe.

I get so emotional baby

After an emotional reunion, exploring the town and meeting some locals, Alex not only lands herself a job in the local bar but also gets the keys to a rad flat above it.  Things are certainly looking up, but as any long standing fan of this series knows, it is only a matter of time before things go south and we are left to try and pick up the pieces.  Chapter one ends in tragedy as expected, a mystery unfolds and Alex is required to investigate.

Cursed (or possibly gifted) with psychic empathy powers, Alex is able to read people’s emotions.  Strong emotions such as fear, anger, and happiness are displayed as different coloured visible auras around those conflicted by them.  At the start of the story Alex can be easily infected by the anger around her, causing her to lose control and unleash her ultra-violent tendencies at the drop of a hat.  This is handy in certain situations such as when saving her brother from an unnecessary beating ‘Mike Tyson style’ but has caused her to be regarded as an unstable troublemaker.  The realisation that with some effort she can control this type of emotional infection, makes it possible for Alex to choose whether to take on the turmoil of others to help them or leave them to suffer, if she feels that they deserve it.

In the original Life Is Strange the main character had the ability to rewind time to, let’s face it – ‘manipulate’ those around her.  Empathy can be used in a similar manner and is possibly the next best mechanic in the whole series.  Studying objects near a highly emotional individual uncovers their history and uncovers clues as to why that person is experiencing such a strong emotional response.  This makes it possible to get what you want by putting their mind to rest using this insider knowledge.  Alternatively, you can choose to leave them to their suffering, depending on how much of a sadist you are.   I will admit that I found this mechanic to be slightly confusing at first but soon got the hang of it and was ‘helping’ people left, right and centre. 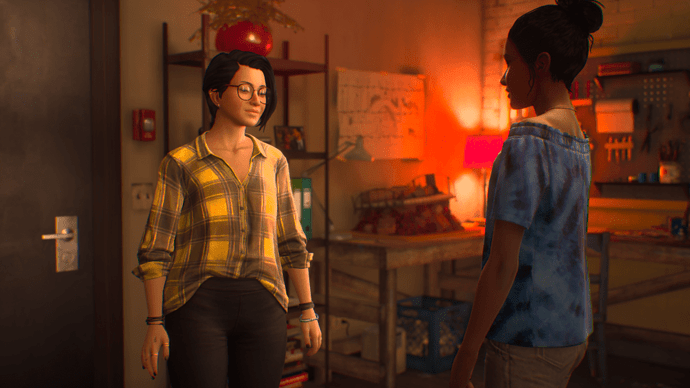 Every time I think of you

The game is made up of activities that fans of the series know well such as exploring the environment, studying objects, completing tasks, interacting with NPCs via conversation trees and solving fairly easy puzzles.  Through these actions we develop the personal life of the main character, build friendships, investigate a mystery and through learning about the past, uncover the dark shadow looming over Haven Springs future.

The five chapters that make up True Colors are all structured to offer players a slightly different experience.  While one revolves around personal background and getting to know Haven Springs, the focus of another is on the paranoid mindset of certain characters.  This resulted in a complete change of atmosphere and tone from that point onwards and I found myself starting to have doubts regarding the friendly small town image being presented to me.  It is funny how the suggestion of possible undercover corporate surveillance can do that to a person. 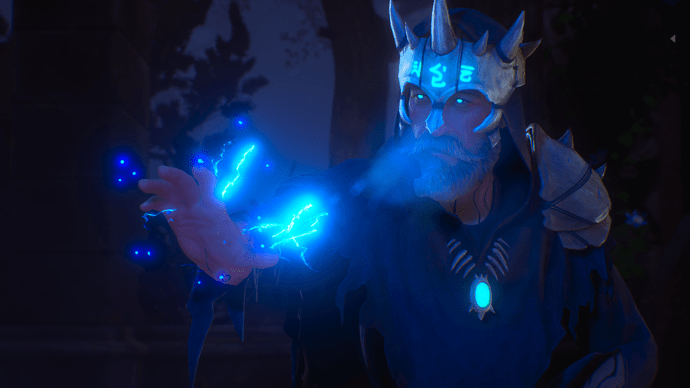 The mid-section of the game is spent taking part in a community wide, Live Action Role Playing event.  This starts in a fairly cheesy manner but surprisingly develops into a fully realised turn-based combat experience.  Although short, the boss battle sequence at the finale of the quest impressed me greatly and suggests that the developer ‘Deck Nine Games’ could easily produce a top quality title in this genre.  Previous players of Yakuza: Like a Dragon will no doubt enjoy having the opportunity to unleash their acoustic guitar fighting skills once again.

The key Life is Strange concept of making important choices at certain times is still alive and well in this latest instalment but seems to have been watered down somewhat.  It is usual to have numerous choices that are not that important, but the number of big decisions which supposedly drive the story in one direction or another seemed to be rather light on the ground.   This was disappointing as it begs the question why bother? if in the end the choice selected makes no real difference to what happens afterwards. 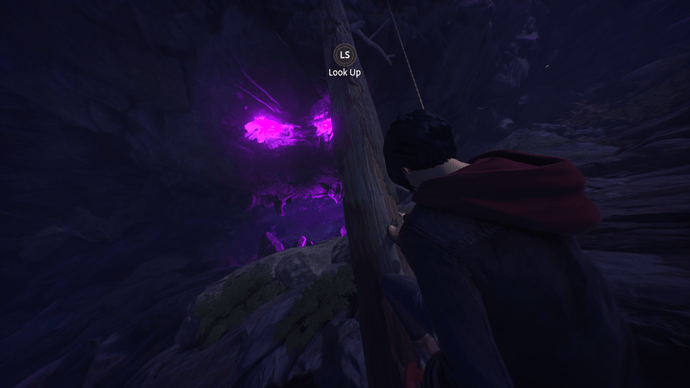 Standard series tropes such as opportunities to sit and ponder while the camera roams around the vicinity and music plays are in abundance as usual.  This time around though I could not help but notice that more has obviously been invested into music licensing.  Rather than relying on good low key indie artists, bigger bands such as Kings of Leon are featured, although unfortunately for them this occurs during a particularly cringeworthy ‘broomstick air guitar freakout’ cutscene.  Fortunately, ‘Blister in the Sun’ by Violent Femmes is treated with the respect it deserves when Alex and Steph perform a cover version at the ‘Haven Springs Spring Festival’.

Several playable smaller games have been included by the developers to test our skills, some of these are played as part of the story and others are purely there to distract us.  Ranging from table football to various old skool arcade games these all play well and are worthwhile mid-game bonus content. 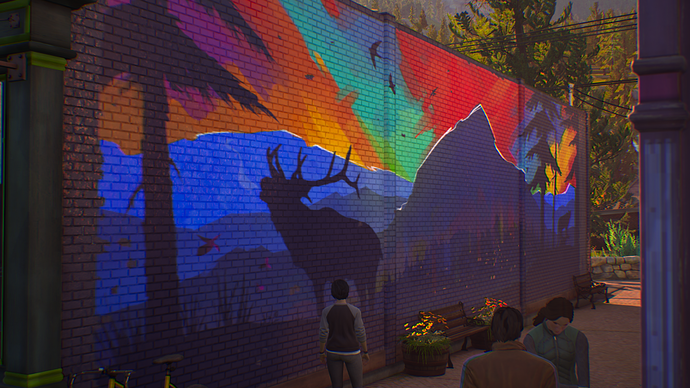 Although the story is slow paced to begin with, once it got going, I found myself wondering where it was going to take me next.  The mystery components were some of the stronger parts of the first game, with very dark subject matter being revealed as hidden in plain sight.  This entry in the series goes the same way with several shocking twists coming out of left field when I least expected it.  The writing like the voice acting is particularly strong as I would expect from these games.  Multiple narrative threads are all tied up nicely by the conclusion of the story and this game was much more satisfying to complete than the aforementioned Life Is Strange 2.

As well as having a broader range of accessibility settings than most games, the developer has done well to bring another taboo health issue into the spotlight.  Alex’s encounter with a character suffering from the onset of Alzheimer’s disease is not only dealt with compassionately, but effectively portrays how horrific the symptoms must be.  The game is worth checking out for this experience alone.  It is not a long section by any means but is the first time that I have personally come across this subject matter in a video game and it has stuck in my mind ever since. 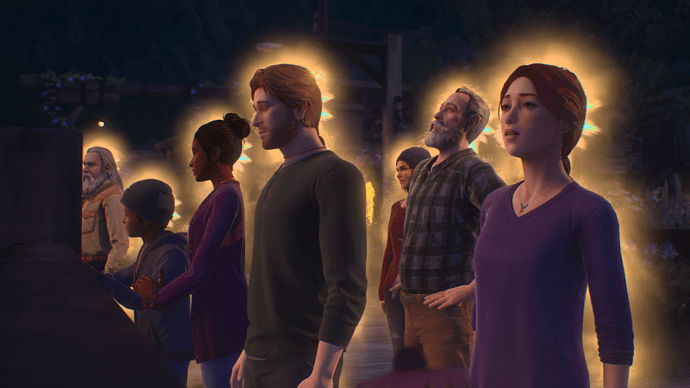 What love can do

My biggest complaint about playing as the very likeable Alex would be the way personal relationships are offered to her.  An acquaintance of mine commented that during their playthrough they felt like they were being forced to have a romantic relationship with a particular male friend, a particular female friend or no romantic relationship at all.  I am inclined to agree with her on this point.  For a game series that has always dealt so well with LGBTQ issues this did seem like a rather binary set of choices, Him or Her?  Why couldn’t Alex be with one of them and then the other before deciding between them, or even have an ongoing relationship with both of them?  They are after all extremely close friends, so why does one have to be devastated by the rejection of the other two?

Upon game completion I had enjoyed the experience and have no major complaints about it.  This is in my opinion one of the better entries in the Life Is Strange series.  The game performed well on my Series X, the artwork, music and voice acting is of the usual high calibre and fans of the universe will find this entry as enjoyable to play as any of the others that have gone before it.

Strangers to the series should also check this out while it is available on Game Pass because let’s face it, they have much to gain, nothing to lose and life is indeed strange.

Ultimately I thought this game was just okay. I had fun while playing it and Alex is great, but after the fifth episode was over I just had a feeling of… “That’s it?” Like the setting and story just ultimately didn’t amount to much. It’s nowhere near as memorable as LIS1 and even Before the Storm.

Looking forward to playing this soon.

Ultimately I thought this game was just okay. I had fun while playing it and Alex is great, but after the fifth episode was over I just had a feeling of… “That’s it?” Like the setting and story just ultimately didn’t amount to much. It’s nowhere near as memorable as LIS1 and even Before the Storm.

Yep, same. I’m replaying the first one and it’s still a gem.

True Colors had a great premise, but they wasted it, probably because it would have been too much work making all the many paths you could take by influencing people’s emotions. It would have been interesting.

And it’s also the shortest game in the series, so it’s really disappointing all around.

That said, their engine and graphics are top notch. The jump between Tell Me Why and this, is big. Face animations are also a big improvement. It really set things up for their next game.

I agree that LIS and Before the Storm are without doubt the best games in the series.

Life Is Strange blew me away.

The Boss battle made it worth it.