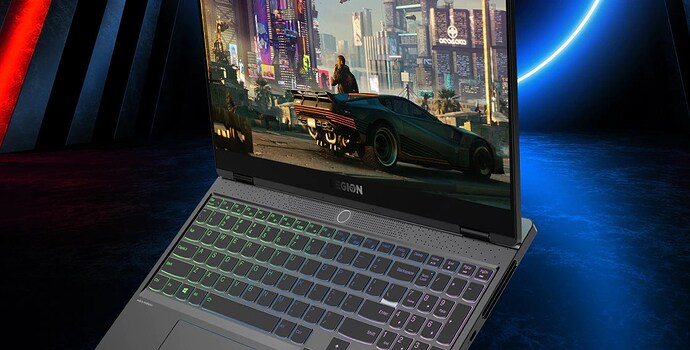 All-in-one desktop replacement laptops used to be my go-to for years. Before building a beast of a rig thanks to our fine patrons I used a mid-tier Lenovo for years. After reaching out to multiple hardware companies the fine folks at Lenovo sent me two of their newest laptops to check out for review. I’ve spent nearly a month with the Lenovo Legion Slim 7 (Gen 7) and it is hands down one of the best laptops I have ever used. From its vibrant and bright display to its excellent performance this machine is a beast of a “thin” laptop. Let’s break down its specs and how it feels to use in practice. The unit I was sent for review was equipped with the following.

The speakers are an ok, but tinny overall sounding set of 2W Harman Speakers. The chassis simply isn’t big enough to create a booming bass. The power button doubles as a fingerprint reader, and the keyboard’s white backlight option was set. You can get an option per-key RGB lighting setup on the keyboard as well if you want to spend a little extra.

My unit also came with the biggest you can still bring on a plane 99.9Wh battery as well. When doing light office work I saw upwards of 8 hours per charge and I clocked in around 2 and a half hours of gaming time in Forza Horizon 5 on a single charge. My laptop’s listed weight is 4.9 lbs with the larger battery and the aluminum chassis was the Onyx Grey variant which looked mighty slick (though it showed fingerprint oil off far too well).

I love a 16:10 display and this is one of the best IPS panels I’ve used. You lose out on the inky blacks of an OLED of course but it holds up well in every use case I tried it out on. For office work, I did have to turn down the brightness a bit for applications that do not support dark mode as it can get quite bright. Editing work in DaVinci Resolve was a breeze as the extra height afforded me more room for my timelines. Having such a powerful CPU and GPU helped take advantage of the 165 Hz refresh rate on the panel. One issue is the HDR mode. While it can reach 500 nits in SDR it only gets to 400 in HDR which isn’t good enough. Trying out games and movies in both modes I stuck with SDR as it looked way better in every scenario.

To test out performance I installed multiple games available through Xbox Game Pass that offer up benchmarks and then ran each one through five times to see how sustained performance would hold up. The marketing materials show off the “Legion ColdFront 4.0” software and hardware combo. With our powerful AMD setup’s Ryzen 9 6900HX CPU and RS6800S GPU, this “quiet” machine did get reasonably loud under load. Thankfully the fans appear to be of high quality as it wasn’t an unpleasant whirring and as I play games while wearing a headset it was a non-issue. All benchmarks were performed while plugged in and running at the max performance setting built into the laptop.

First up for benchmarks we have Forza Horizon 5: 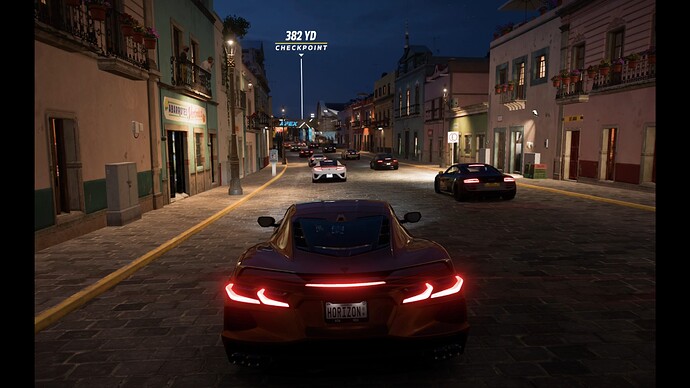 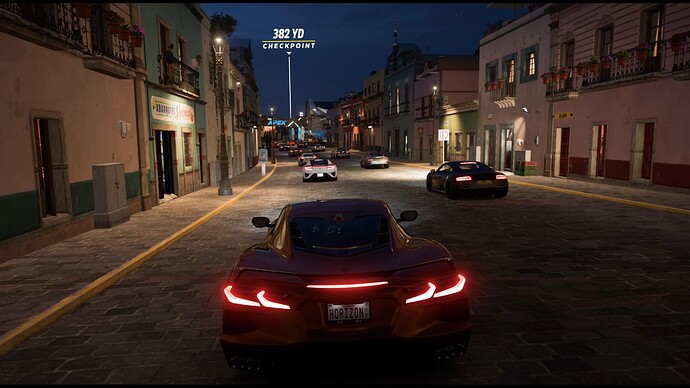 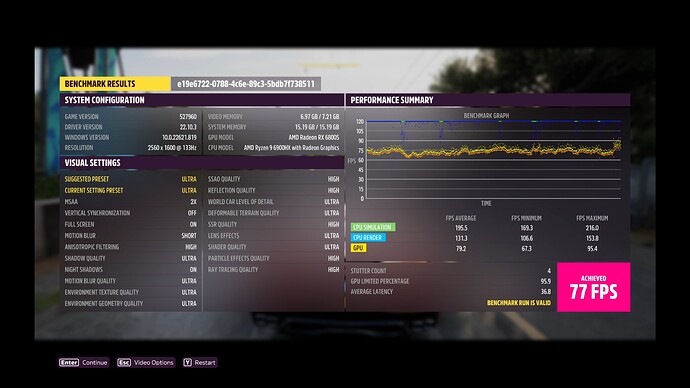 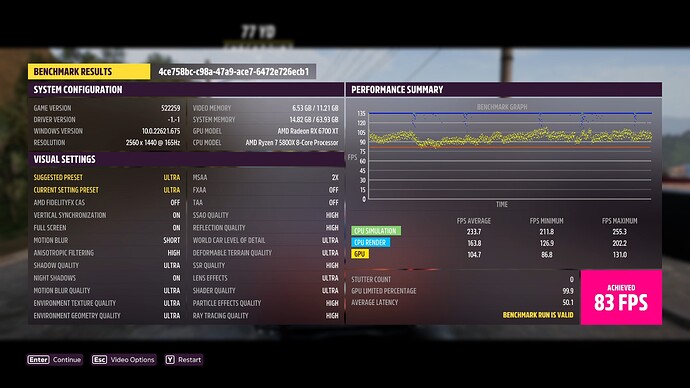 Running a mix of High and Ultra settings with Ray Tracing enabled saw an impressive 77FPS on the benchmark. Later runs hit 100 easily with Ray Tracing disabled and a few of the more demanding Ultra settings lowered to High or Medium with little discernible difference in picture quality.  Comparing this to my Desktop PC running an AMD Ryzen 5800x and RX 6700XT there is a significant performance gap.  I spent roughly the same on building this PC as the Legion Slim 7 costs at MSRP.  While my desktop did easily outperform it, I was extremely impressed by Lenovo’s showing here. Even after 5 straight runs there was no drop in the benchmark numbers. 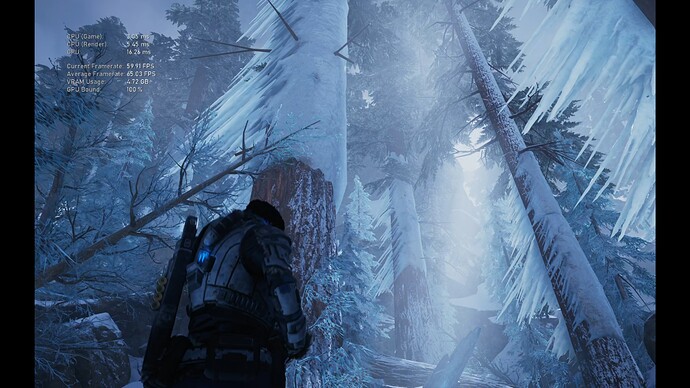 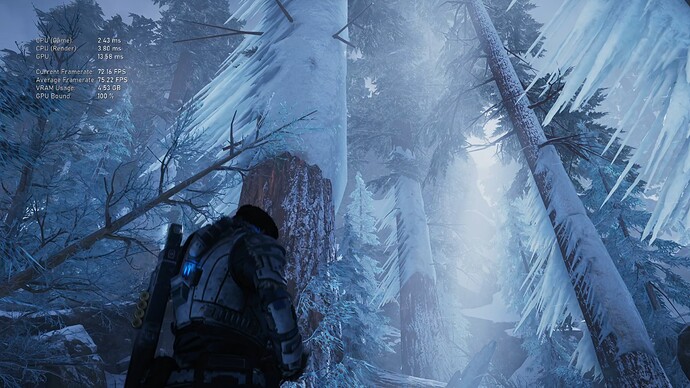 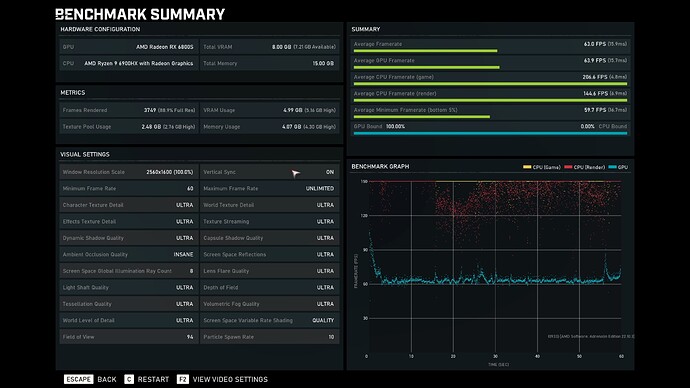 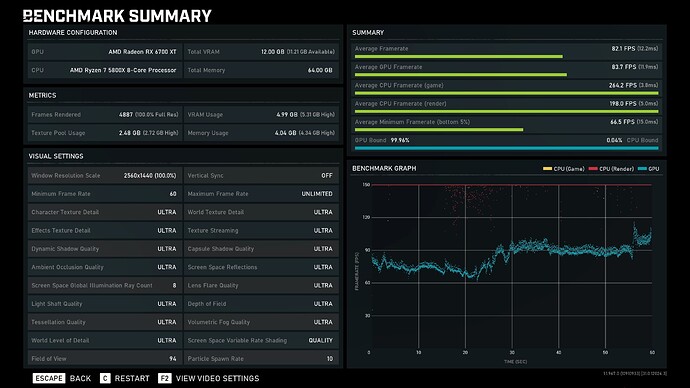 Next up is Gears 5. Running at Ultra settings we see an average of 62 FPS and this did drop by run 5 from my first few runs which averaged 65. The similarly priced desktop crushed it performance wise averaging 82 FPS at the same settings. A respectable showing but one you’ll need to lower the graphical fidelity a bit if you want to take advantage of the high refresh rate of the display. 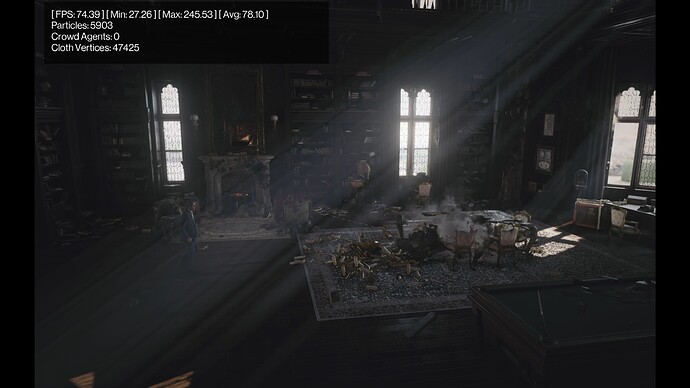 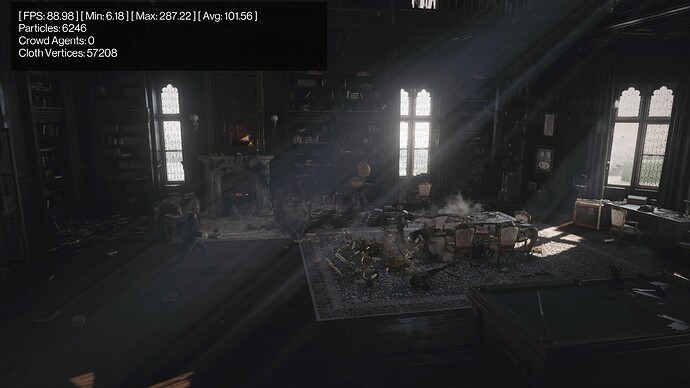 Our final benchmark is Hitman 3’s Dartmoor Scene. Running at max settings and ray tracing disabled the Slim 7 scored a respectable 81 fps average. On PC it’s a similar story to Gears 5 as the desktop scored a dominant 105 fps average at the same settings.

I also played Halo Infinite which sadly doesn’t have a benchmark so I just fooled around in the open world and opening level. My averages on the Lenovo were hovering around 100fps at max settings in the corridors of level one. It did drop down to the mid-50s at times in the open-world sections though. On PC at similar settings, I averaged roughly 150 indoors and 80 outside. With all of these games, it is worth tinkering around with your base settings and taking advantage of tech such as FSR 2.0 (fidelity fx super-resolution) in supported titles. I didn’t get to test it much in Forza Horizon 5 after it was added prior to this review. Still, I did see a noticeable uptick in performance at the cost of some clarity and shimmering in thin lines by running the game at a lower native resolution and then upscaling it with FSR 2.0.

The Lenovo Legion Slim 7 is a tank. Try as I might, I couldn’t get its deck to flex at all across the entirety of the keyboard. Speaking of the keyboard it’s a short throw, a slightly clicky design that was comfortable to type on accurately. It features a full 10 key number pad on the right and a large trackpad surface so that my wrists could easily rest while typing this review on it. The trackpad itself is big, smooth, and has a satisfying click. One issue I did have was accidentally clicking while using it. After a short adjustment period though I found the right amount of pressure and it was fine. For the heavy-fingered out there though it may be an issue.

The webcam features one of the best additions to any laptop, support for Windows Hello. After a painless setup every time I opened my laptop it instantly recognized my ugly mug and logged me into the local account I had set up on it. The I/O is listed above and it is fantastic. I did not have the right plug to test it out but you can use a USB-C port as a DisplayPort cable. One of the USB A’s on the back is a fast charging port as well for plugged-in devices and overall it has everything I could ask for out of an AMD system. MSRP starts at $1,949.99 at the monster they sent us but you can build your own on the site and I’ve already seen deals popping up around the holidays chopping off as much as 22% on their site.

The display is great (in SDR), and performance is fantastic in basic tasks and gaming alike. The sound quality is fair though the bass is a bit weak, and the keyboard/touchpad combo is excellent. With all this power does come a cost and despite its massive battery capacity, you’re not getting all-day use out of the machine unless you dim the display a lot and put it in a more eco-friendly mode. If Xbox Era ever becomes big enough to start traveling to game studio press junkets this is the on-the-go editing and gaming rig I want to bring with me.

Image compare works great on the site but not the forum

I use a Lenovo as my daily traveler, and I’ve really been won over by the brand. When I look for an upgrade I think I’ll be returning, and this looks great.

I use a Lenovo as my daily traveler, and I’ve really been won over by the brand. When I look for an upgrade I think I’ll be returning, and this looks great.

Yeah this thing is a beast. I have a mid-spec Intel version I’m going to do next. Already ran all the benchmarks, just need to use it for a few weeks or so