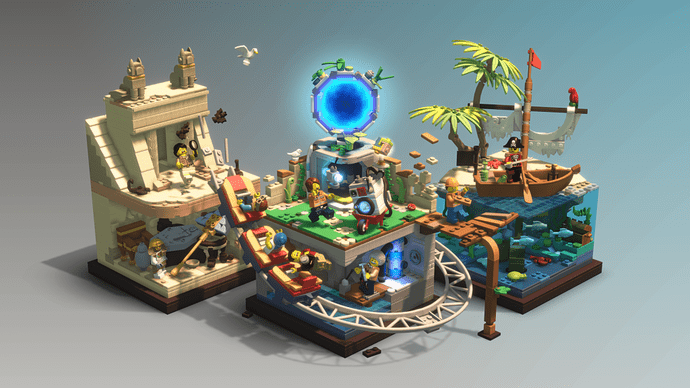 As a child, I loved LEGO – I have very fond memories of building my own awesome spaceship, in competition against my younger brothers far less cool, more boring one – I’d always win all the space battles at any rate. As a parent, I got to fall in love with LEGO again, watching my son play with all his new Minecraft themed sets, as well as the very same bricks from the 80’s and 90’s sets from my childhood. (I even found my old spaceship, or parts of it at least, buried deep in the LEGO bucket)

So we’ve had a pretty fun time with LEGO as he’s grown up, and that includes many of the licensed video games from developer Travellers Tales, which are typically more automated-building, combat driven affairs across a multitude of movie properties. I enjoyed the recent (and absolutely gorgeous) Builder’s Journey, which took a far more relaxing path on playing with LEGO digitally. To me, building is at the heart of LEGO, from the mundane to the extraordinary, and the latest game from the team at LEGO via publisher Thunderful and developer Clockstone Studio tickles that itch in spades. 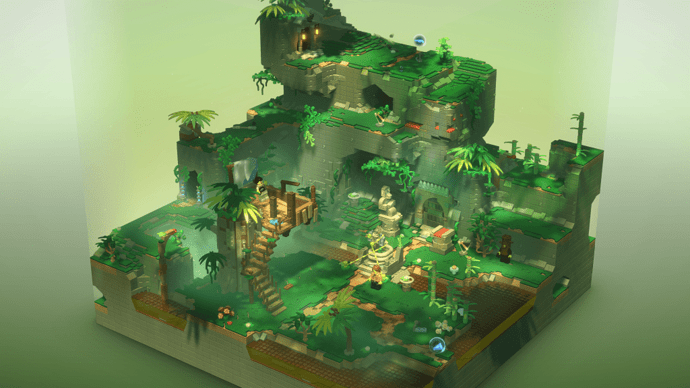 It’s an interesting premise – the game is primarily a physics-based puzzle game with a focus on, you guessed it, building LEGO, but it also has a fun narrative, with hints of a platformer style collect-a-thon and even a sprinkling of metroidvania for good measure.

You play as the grandson of a wacky inventor and theme park owner, whos park is in disarray and obviously requires your help to bring it all back online, or the Mayor will reclaim the land on which it sits. After a great tutorial (that gets surprisingly complex) you’ll befriend a robot companion (one of your grandfathers inventions that got lost in space for a bit, met a bunch of aliens and got himself some sweet upgrades) as you set out across multiple LEGO dimensions to collect ‘Happiness Crystals’, the only true and sensible source of energy one can use to power a theme park. The writing and narrative is great fun, with plenty of silly jokes and a healthy dose of self-deprecation. The game will routinely mock itself when it sends you on a particularly long-winded fetch quest. 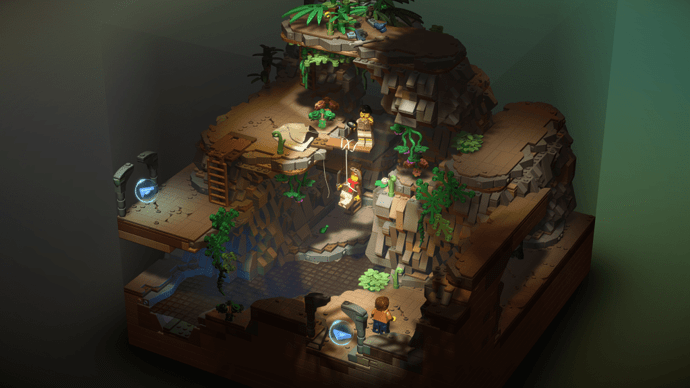 Each dimension is nice and varied, all represented as absolutely gorgeous LEGO dioramas – gorgeous jungles, tropical pirate coves and medieval themed worlds with dragons are just some of the areas you’ll visit as you journey through the games narrative. The main objective is to assist the LEGO citizens of these different worlds, solve their problems and get yourself some pure grade A Happiness crystal. Each LEGO dimension is wonderfully designed, with multiple paths, collectibles and hidden areas and puzzles to explore and solve. Whilst not quite as “realistic” as Builder’s Journey, Brick Tales is a bright and beautiful affair and the ability to pause and zoom out to view each diorama from a distance is a really nice touch.

In order to solve the problems each LEGO dimension is having, you’ll typically be asked to help build things – a bridge to get across a ravine, or a raft to sail to another island. It’s here where the game can be at it’s most zen-like, and also it’s most infuriating.

If you build it…it may fall apart. 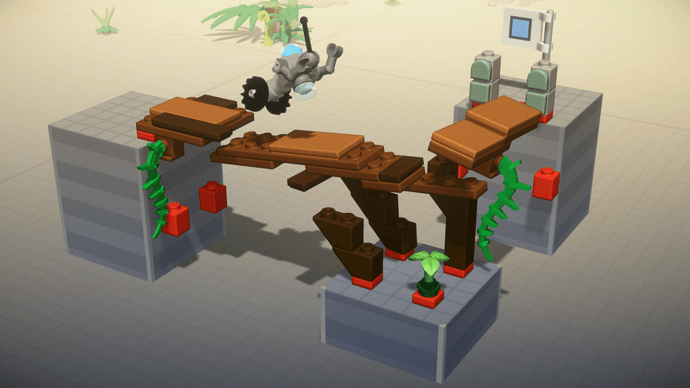 Each build is presented in a dedicated interface; more or a less a digital representation of the manuals you’d get with various LEGO kits but with one key difference – there are no instructions or step-by-step guides to follow. Builds often have to be structurally sound, and you’ll be able to simulate whether your build works with a handy LEGO robot before you can drop your creation back in to the actual game world.

The build mechanics can actually get rather complicated, and on controller, the configuration is serviceable at best, but absolutely frustrating at it’s worst. It often felt like the pad was overly sensitive, and too often I would find myself getting irritated when I thought a brick was dropping where I wanted, only for it to go somewhere else. Coupled with a bit of an iffy camera, the lack of precision can really take its toll.

It’s also in these build sections where the game also sees it’s biggest difficulty spikes, and younger players may want to give up rather than figure out some of the latter challenges. One particular annoyance was a physics based puzzle that required rainwater to be collected. There was one little drop that just surfed on the edge of the barrel every time, and it required a tonne of trial-and-error design. I also curse each one of the build-a-pathway-to-multiple-destinations-at-varied-heights challenges. It would have been nice to see the developers add a hint option to allow more people to enjoy the game of all ages, but alas – the controls and options on offer are pretty rudimentary. 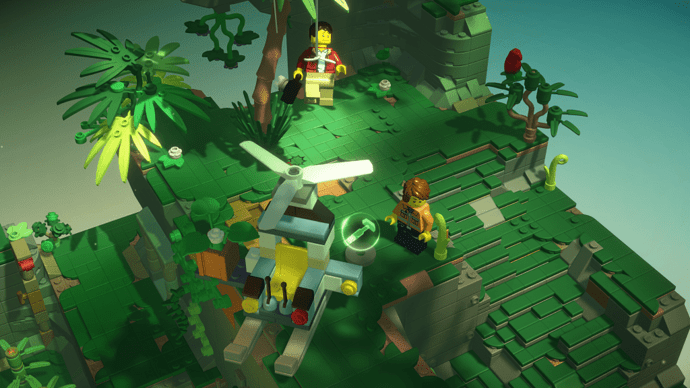 As you progress through the game, you’ll also unlock upgrades for your robot pal Rusty, ranging from a ground smash attack to clear labelled obstacles, a water gun, an all-seeing-eye dimension shifting field, a teleportation-electro blast and my absolute favourite, a cool hoverboard.

I mentioned a dash of metroidvania earlier? There are a tonne of hidden and inaccessible areas early on, that you can only go back and get to once you’ve unlocked the required power or equipment. There are also a bunch of collectibles – mostly animals, with a character looking to collect them for a variety of reasons in each dimension. There’s also a bespoke in-game currency to find (drumsticks, donuts, you name it!) you can collect via treasure chests in each world, where you can buy new outfits for your character (yes, all very customisable) as well as LEGO bricks and colour sets for construction in the sandbox mode.

With Sandbox mode, you’re able to go back in on any previous build (once completed) and take on the challenge of tidying up any of your more hasty constructions – as well as using additional colours and blocks beyond what you’re initially given.

All the extra ‘purchasable’ bits are sold by a Ghost, who also offers to come run all the rides at the Theme Park for you. It’s worth noting, this is all earned ‘in game’ – there are no microtransactions to speak of. In short, there’s plenty of replayability here. 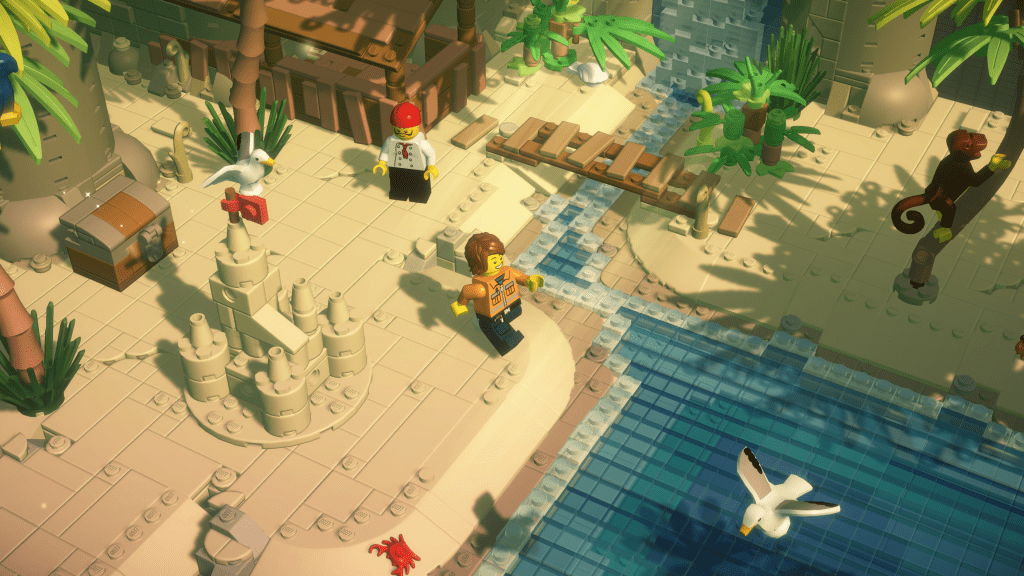 Following the successful collection of a Happiness Crystal from each dimension, you’re promptly transported back to your grandpas Theme Park, where you can harness its energy to repair one of the rides. Of course, you’ll have to help build those too, from Ferris wheels, a swan or a duck for the boat ride, to the design of a rollercoaster and even an awesome Pirate ship.

So LEGO: Brick Tales then – a bright, colourful and certainly more creative take on LEGO in its digital form. While there’s some fiddly controls at times, it’s all quite charming and relaxing – and as the rest of the package is so wonderfully put together, it’s hard to gripe too much about a fussy control scheme. Besides, back in my day, I never used a manual to build my spaceship, and had to spend quite some time searching for just the right brick to make the whole thing work. Either way, it was a great dose of nostalgia.