Kingdom Rush is coming to Xbox.  What a weird, out-of-nowhere release for this classic mobile tower defense game.  After spending a dozen or so hours replaying it I think it’s safe to say that the transition from touch screens to controllers has worked well so let’s get into it. 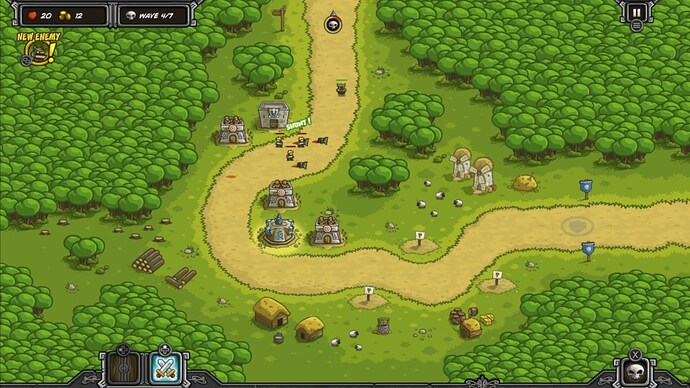 Kingdom Rush has a simple premise.  You’ll set up defensive structures along set paths as various enemy types walk or fly toward an end goal as a series of waves.  You’ll quickly unlock Hero characters who are yours to move in position as they automatically use their attacks and abilities.  Many of the early levels serve as tutorials on how each defensive tool you’re given works, as well as the various enemy types you’ll face.  It’s a tough game, and learning which tower can properly take down each enemy type will be key.

The most basic defensive structure is your barracks, which will put three soldiers in the path of any oncoming enemy.  At first, they’re weak, poorly armed people who deal little damage and die quickly. For damage output, you’ll have archers, wizards, and artillery emplacements.  Knowing who to use where, and how you should upgrade them is 90% of the game.  Upgrading requires coins, of which you’re given a small amount at the start, and will earn more every time you kill an enemy. All of your heroes and towers will automatically attack in a pre-defined area around them. Most of the time you will be setting up choke points so that the most damage can be dealt to enemies as they stop to fight your foot soldiers.

To do this you will need to adjust where your soldiers and heroes stand constantly throughout each level.  This is one of the tougher actions to perform on a controller, in comparison to the game’s original touch controls. Cycling through each building was occasionally frustrating as I would move up but it would push me up and left. After a few hours, I felt a lot more comfortable with the game’s logic on how the analog sticks would move in each level, but it was never quite as fast as the touch controls were when I tried the game on my phone again. This is rough because as best I can tell this is a 1:1 port from the original mobile version.  Every enemy wave seemed to have the exact same layout, health bars, and my own characters dealt the same damage. The game got hard pretty quickly, and I had to replay levels a lot until I felt more in tune with playing on a controller. 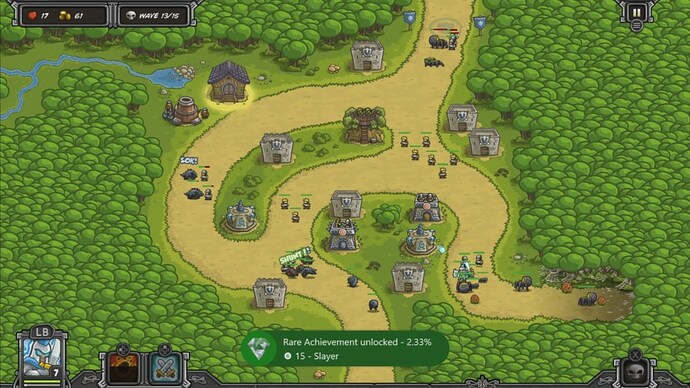 While your hero-types and tower emplacements auto attack you do get two abilities to start with that you have a bit more control over.  The first is the local militia, whom you will rely upon heavily to keep enemy units from moving forward.  They’re weak and do not do much damage, but they are always useful. The big ability is your rain of balls of fire that causes huge damage in a small area and has a very long cooldown. Knowing when and where to use this will be the difference between a 3-star clear and a wipe throughout most of the game.

Those stars are important as they fuel your leveling tree.  Each of the game’s tower structures and user abilities can be upgraded in a linear path, and the more stars you get per stage the faster you can level them up. It’s worth going back to older missions and hitting them up again if you didn’t get three stars once you’re more powerful.  I had one or two stars in several of the first 5 missions, and once I had a hero character and a few upgrades I was able to easily beat them without a single mob reaching my base.

Graphically the game looks exactly like a high-resolution version of its mobile counterpart.  The framerate appears to be a locked sixty, and it was a perfect title for Quick Resume as I could quickly pop in and out without any issue.  There is no online functionality which is the bane of Quick Resume. The audio sounds exactly the same as the mobile version as well, and I had zero bugs while playing. 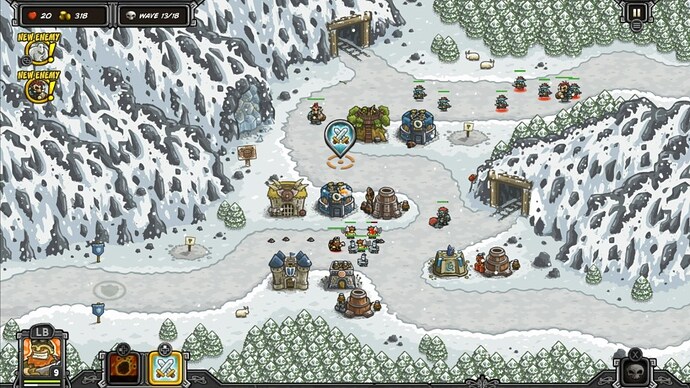 There really isn’t much more to say about Kingdom Rush on Xbox. It is a faithful 1:1 port of the mobile game, for better or worse.  The controls work well in the end but did require some time to get used to. At only $10 at launch, it’s an easy purchase if you’re already a fan or someone new to the series.  Here’s to hoping that this is just the start of the franchise porting over to consoles. 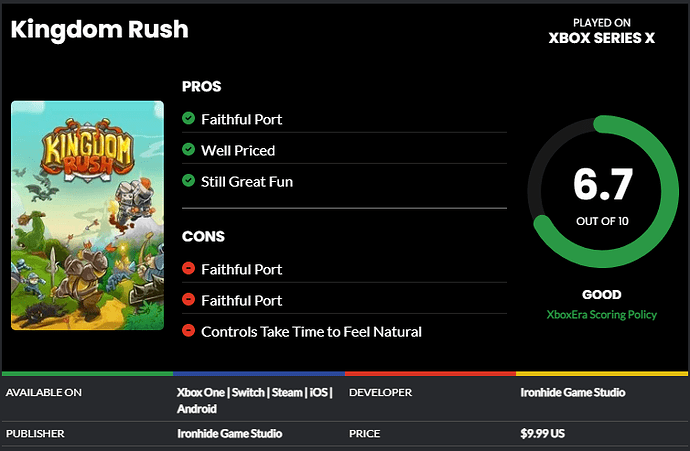 I’ve played this game a lot on my phone, even all the sequels as well. Its a great tower defense game, but surprised to learn its released on home consoles as well. Can recommend it if you haven’t played it yet, but if you own a phone I would go via that route to be honest.

But I still bought it, hoping they will make a new one I guess. Gonna 100% it again for sure.