Hello Neighbor 2 is what I would describe an adventure puzzler slash horror-like game developed by Eerie Guest Studios and published by tinyBuild. A sequel to a game I can only remember as a fever dream of sorts, the player assumes the role of a journalist who, while keeping tabs on everyone, spots a burly man forcefully dragging a little boy, crying for help, right into his home. Before the journalist can take action, the old man goes first, conking you out. After waking up back in your flat, your character becomes dead-set on saving the boy—a mission that will take you across the whole neighbourhood, being an absolute menace to your “neighbours”.

Hello Neighbor 2 follows a similar structure to its predecessor and, in some ways, other games like Five Nights at Freddy’s: Security Breach. Each day and night, the player is tasked with ransacking a house of interest to discover clues, solve puzzles to obtain keys, and use them on the doors of the museum where the boy is kept in captivity. It’s easier said than done, of course—every home has its occupants and they definitely do not want you running around and ransacking their humble abode. This leaves you with a time limit as you not only need to learn your end objective and how to clear it, but also avoid the artificial intelligence (“AI”) who will toss you out and take back items that belong to them. This should work in theory, but in practice leaves a lot to be desired.

But first things first, credit where it’s due, the game’s levels are great. Not just in design but how the neighbourhood and each house has an abundance of detail that really gives each level’s AI plenty of character (no pun intended). Most of them are fun to explore and the puzzle mechanics within them fit the aesthetic of said character. They don’t just look like homes, but they give players plenty of advantages against the computer, such as open vents or holes in the wall that let you keep tabs on the homeowner. The visuals also hold true to the colourful cast of the game and I think some of the best moments of the game for me was simply sightseeing. The whole town is this bright and cheery suburban setting but yet eerie and peculiar—the perfect set up for kids that want to get spooked. The music and ambiance do a good job of being the right amount of pleasant and creepy when needed, too.

It pains me to say this, but despite the good level design, things fall apart once you get to gameplay. The player character sees everything through the first-person and there are virtually no UI icons. For the most part, this game’s implementation of this immersive view is pretty good. It’s out of the player’s way and the inventory system is beautifully simple—I love it and I want more games to implement similar systems. The downside comes down to the puzzles and what the game expects you to pick up and use or break to complete objectives: too often things I thought I could interact with I could not and vice versa. It doesn’t help that the player character controls aren’t very… Grounded, I want to say. Objects you toss, for example, can fly very far distances and sometimes they’re tools that you might have needed to complete other objectives within a level.

Ultimately, while the game did a fairly good job with giving solutions to its puzzles in its level design, the lighting, art, and objectives felt more of a chore to figure out than fun. Remember that note as we delve into the second half of the game: the AI that challenges you. 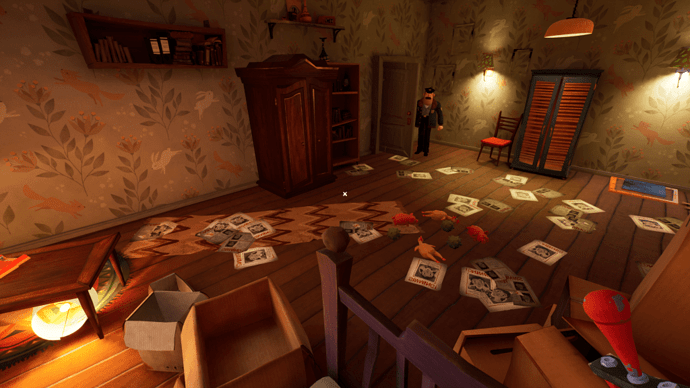 As I’ve mentioned a few times now, Hello Neighbor’s biggest component is its non-player characters: the Cop, Baker, Crazy Old Man, Musician, and the dad-bod Neighbour. Their job is to wander their homes, do ‘home things’, and kick you out. Their intelligence isn’t the best and they’re only as menacing as the game’s level design allows them to be. Ergo, the smaller the house the more of a challenge you’ll have. But not only can you easily outrun them, if you jump onto anything they can’t reach, they’ll give up and leave you alone. And until the final boss, the AI is barely a challenge and serves more as a brief annoyance.

This AI is important because, without it, the player is left with a middling adventure game with simplistic challenges that really depend on the player being chased. That too, is evident in the levels where many a floorboard will creak or the doors with jingles attached to them. I learned this when the game’s AI broke down during some of the levels, allowing me to freely walk around and complete my objective.

Mind you, I actually prefer this game’s enemy behaviour compared to the likes of Security Breach. The computer will try and pathfind their way to you instead of immediately teleporting behind you and they’ll pick up objects you’ve played around with and reset their position. It’s also nice to watch them interact with their environment, adding to that character I was talking about earlier. But the computer has also lost some mechanics from the previous game (a game I had plenty of issues with compared to this) which kept players on their toes. For example, in the first game, depending on how the player entered the home, the AI would learn from this and bolt up the entry point which forces the player to find another path to getting back inside.

Because the AI has little to retaliate against the player with, the game sadly feels more like a home invasion simulator rather than anything scary or even mysterious. 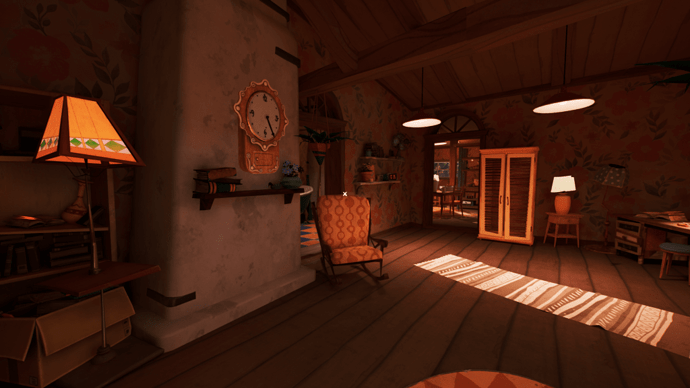 Completing each objective rewards the player with a story that gives plenty of questions and absolutely no answers that I picked up on. There’s no voice acting and the game uses what I’d best describe as ‘Simlish’ for everything written, which works with its aesthetics, but I feel leaves the player in the dark a little too much. The cutscenes are also well-animated and I enjoyed watching them. But because I never got a single answer to the whole town’s motives and why everyone seemed to know more than my character (who lives in the same neighbourhood, by the way!), by the time the credits rolled I felt cheated. Maybe it’s a story for YouTubers to debunk, but as for me, nothing made sense.

Hello Neighbor 2 is a game that features advanced game design, so it’s no wonder things turned out like this—it’s a difficult game to make especially for a small team. But if anything, I think it is a step in the right direction for the game’s inevitable sequel. There’s no doubt in my mind simply because it’s a better game than the first. If the team can figure out how to keep its solid level design and integrate challenges that tie in both the AI and the puzzles within the level, I think there’s a homerun to be had here.

But until then, keeping tabs on your neighbours for a short while isn’t the worst thing you can do with your time.