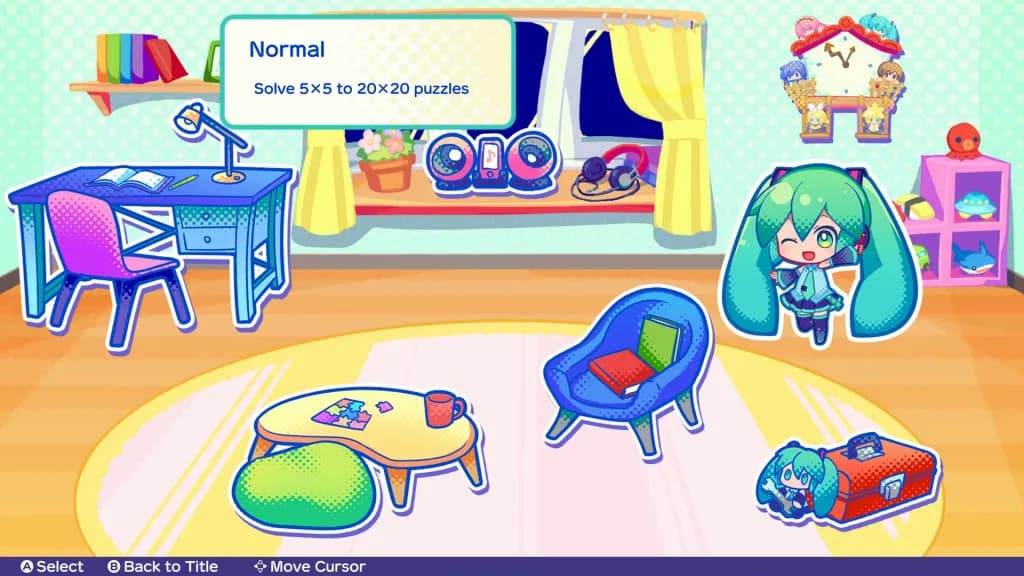 As someone who frequently plays puzzle games and various muscle memory games on console while multitasking – when watching a TV show, or a not particularly intense sports event – the Picross games on Nintendo consoles have served me well, offering my favourite kind of puzzle in a convenient format. I have long lamented the absence of notable nonogram puzzles games on Xbox, and now we finally have one, based on the most famous Vocaloid project, no less. Here’s the XboxEra review for Hatsune Miku Logic Paint S!

Filling in the blanks

I have to admit that I am not particularly familiar with the whole global phenomenon of Hatsune Miku, and to an extent, it surprises me it’s still so relevant to this day. The infectious vocoded anime style songs and the lore around the colourful characters surrounding Hatsune seems to be a hot topic to this day, something I don’t mind at all – these energetic tunes give a fun, light-hearted mood to the puzzles of the game. But personally, I bought this game with the intention of playing nonograms, and a licensed IP is just the icing on the cake. So… how does this game manage said puzzles?

The standard puzzles go from extremely easy 5×5 grids, all the way to complicated 20×20 behemoths, with the most pleasant 10×10 and 15×15 variations in between. Like any fan of said puzzles knows, nonograms feel like a mixture of Minesweeper and sudoku, with players given instructions on how many consecutive filled pixels there are on each row and column and having to use intuition to find common ground between said hints, slowly unraveling a monochrome drawing that turns into a colourful pixel art once completed. There is also a mode where the picture to complete is made of dozens of smaller puzzles, ultimately revealing a bigger unlockable artwork.

That’ll take me a while

The game gives complete freedom over which order players can tackle the over 350 puzzles in the title, what ultimately matters is the stars collected – up to 3 per level if they’re finished without hints and mistakes. Every completed puzzle unlocks the aforementioned artworks, while stars can be used to unlock several songs from the Hatsune Miku vocaloid project, which can be listened to in a jukebox mode or set as background music for the menu and the gameplay alike.

While the Xbox consoles feature no touch screen controls, the gamepad implementation of the title is sound, though the D-pad is recommended as opposed to the left stick for moving around on the grid. With handy buttons for placing pixels, negative spaces, and evoking hints, the gameplay is fast and precise, making misclicks a rare occurrence.

The game doesn’t seem to even attempt to hide its clear inspiration from Nintendo’s decade-spanning Picross franchise, the recent S episodes on Switch in particular. While there are a large number of puzzles and unlockables, there are various features missing compared to the most recent installments in the franchise: no two-player mode, no coloured nonograms, and there are also fewer options for customizing the hints and assists. The low launch price certainly helps mitigate these losses, at least.

I hate to write reviews where I constantly compare the game at hand to one specific existing product, as it may appear that the title’s main strength is being somewhat similar to a more famous game. And while the famous Nintendo franchise definitely did not invent the nonogram puzzles, this game’s whole design, structure and progression is virtually identical to the Picross S series for the Nintendo Switch, with only a handful of additions like avatars and customizeable background music that ties the game to the IP it’s based on. It may lack originality, a couple game modes, and quality of life additions from later chapters of Nintendo’s counterpart, but it’s a polished and fun collection of nonograms with a distinct Hatsune Miku flavour that will keep fans of the genre entertained for several dozens of hours, filling exactly that Picross-shaped hole that’s been missing from the Xbox One and Series X|S library.

While this particular game has nothing to do with Sega I hope Sega brings over a Hatsune Miku Project Diva game some day (Probably the one that came to Switch not too long ago, Mega Mix?). Taiko no Tatsujin seemed like a pretty big hit on Game Pass, I think that showed there is an audience for rhythm games here.

Thanks for the review! I do love Picross and it’s hard to go wrong for fifteenish bucks.