Gunfire Reborn ponders the eternal question. What if we took the roguelike formula, put a bunch of furries into it, and put the most basic looking yet somehow still cool Borderlands-style graphics on it?  The result is a four-player co-op run-based shooter that’s coming Day One to Game Pass that I’ve had a ton of fun with. Don’t let the cute looks fool you, this game has a surprising amount of depth on offer so let’s break down this incredibly weird port. 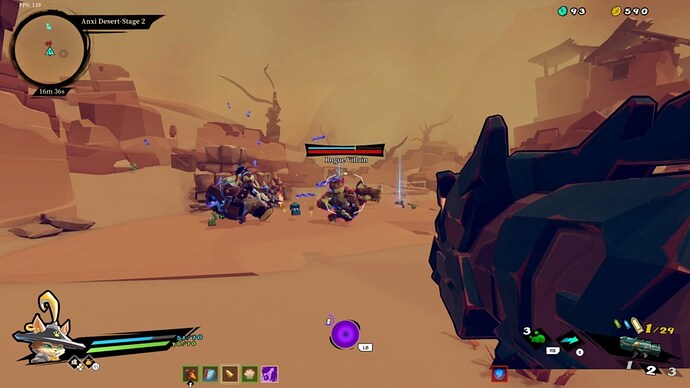 Developed by Duoyi Network in China, Gunfire Reborn was originally released on PC in 2020. You start the game off as a cute cat, quickly learning the structure of each level in Google Translate level still image cutscenes. There is ancient evil and you want to beat it up and take its treasure. To do this you’ll slowly unlock a selection of furry killers, each with their own backstory steeped in Chinese mythology. Heck, quite often the UI will have Chinese characters in it. French, Spanish, and various Southeast Asian languages have cropped up in item descriptions and dialogue at times for me. It’s a barely functional port in a dozen ways, yet I still had a blast playing it.

The game is a very light rogue-lite, with a large leveling tree that offers up a quick and great feeling power ramp. To get these levels you will go on runs through a series of acts that range from underground caves to sandy dunes, bogs, and more. Each act has a set number of procedurally generated levels and features an Act specific boss at the end. The level tiles in each act differ from one another well enough, though the same layouts are repeated often. At the start, you’ll be spending a lot of time seeing the same rooms and fighting the same enemies. Keeping the monotony of this down is the weapon and build varieties that you will quickly unlock.

You’ll need to complete in-game challenges to gain new weapons and scrolls (your character buffs/modifiers). Most of these are “kill x number of this enemy” in nature, and I rarely had a run where I didn’t unlock at least five new items. The dopamine hits never stop, though the amount of weaponry that drops does feel tuned for the up to four-player co-op at all times. Sadly, at the time of this review, the club system had not been turned on yet and every time I attempted to send an invite to one of my Xbox Era co-workers to play together it instantly failed. That is a shame as the game is so darned fun to play solo that I imagine co-op is something special. 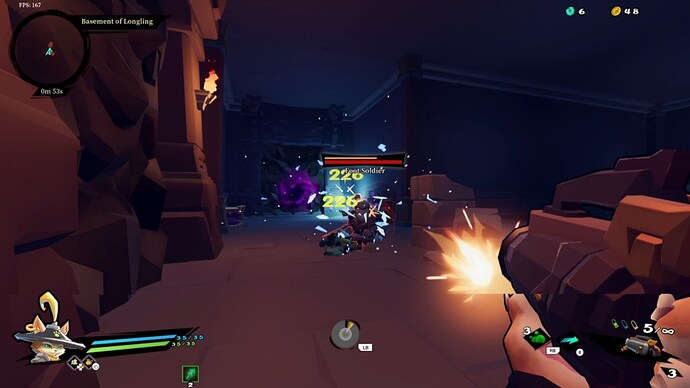 A solid if rarely used soundtrack is met with visuals that would look at home on an Xbox 360 running in enhanced resolution on a Series console.  I played on a Series X and the game hilariously enough has an always-on framerate counter in the top left. In menus, the game averaged between two and three hundred. During gameplay, I rarely saw it drop below One-Thirty, with highs nearing Two Hundred. Everything has a flat and basic cel-shaded look to it, but the art style helps carry it above the typical mobile game fare. Thanks to this insanely high framerate for a console game aiming feels fantastic. It’s a buttery smooth experience movement-wise as well. I rarely felt cheated when I died due to input lag, instead, I knew I had messed up in some easily fixable way for my next run.

You have one main leveling tree that you’ll power up through Spirit Coins that you earn from enemy drops. Each of your characters has a short ability tree to level up as well as a unique set of possible upgrades and a secondary move.  They take a while to level up, and after a week I only had four characters in total unlocked. Movement wise most of them feel similar with B being your dodge, and A as your jump being key in not taking damage. Where they differ greatly are those potential per-run upgrades. The dog character became my favorite as his potential heals after dispatching foes carried me further than anyone else. The per-character abilities all operate on a cooldown that varies based on how powerful they are. The cat’s energy orb that shackles foes doesn’t last very long and has a short cooldown. The dog’s dual wield ability is potent with the right weapon combinations and has a far longer cooldown, as an example.

The best controls in the world wouldn’t matter if the guns weren’t fun as well, and thankfully they’re the best part of the game. You have pistols, throwing daggers, SMGs, shotguns, grenade launchers, missile launchers, and bows…. There are a lot of weapons, various versions of them based on their random attributes, and they are the star of the show. Every weapon has a level, and you can upgrade your current ones at an in-run blacksmith using coin currency that drops from enemies. There are a lot of systems, and the game occasionally does a good job of explaining them. It only fails when the UI isn’t in English, which was a surprisingly large amount of times during my playthroughs.

While the UI and Invite systems have major issues at launch the rest of the game has been rock solid. Performance is steady thanks to its lack of a limit cap, and you can change the Field of View which helps greatly in keeping down motion sickness. Gunfire Reborn is non-stop action, and I did find my hand fatigued whenever using a non-automatic weapon like the crossbow. There are some color blindness accessibility options and difficulty settings to help those who may need them as well. 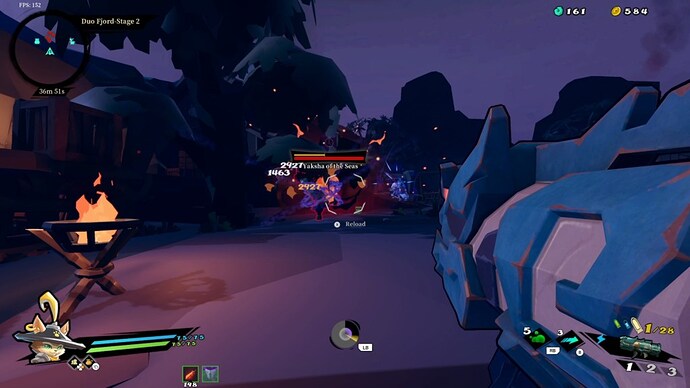 It isn’t the prettiest nor does it feature the best translation, but Gunfire Reborn is stupidly fun to play. The controls feel fantastic, the character and build variety is top-tier, and as someone who adores roguelikes/lites, it had everything I was looking for. It’s out Day One on Game Pass for PC and Console so there’s no reason why you should give this one a try, especially if you’ve got a few friends to play with.

Not a game for me though.

After watching the review I really want to try it!

Can’t wait for this!