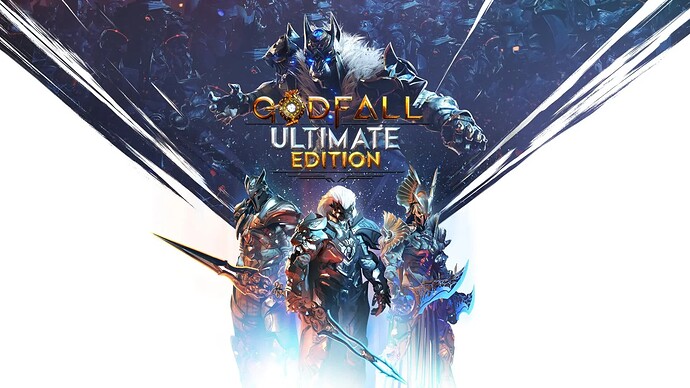 Godfall was originally released on November 12th, 2020 on the PS5 and PC platforms. It was a critical failure cited as a pretty but shallow title. Nearly one and a half years later it is now released on Xbox alongside a massive new update that reshapes many of the game’s systems. Offering a launch discount of 25% is this cooperative melee-focused looter worth checking out? The answer may surprise you! (Because it’s yes). 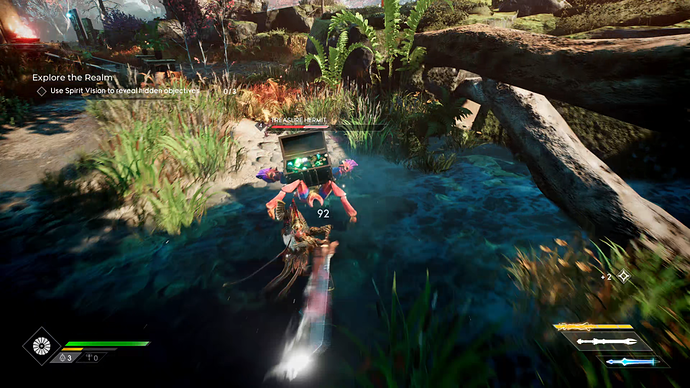 Godfall’s gameplay is extremely fun. I didn’t think it was at first, with a tutorial area that felt repetitive and flat. Things quickly changed though as I began unlocking more moves and weaponry for my character, whose name is Orin. His brother Macros wants to become a god so he attempts to murder his brother to get his way. This is an odd version of earth with various elemental realms and all manner of heavy metal-inspired armor and enemies abound. This game world wants to be cool, badly, but it never grabbed me in any intelligible way. Outside of the weird, throwaway story is a melee combat system teeming with brilliance, three graphical modes offering up a bevy of incredible sites, excellent music, and competent voice acting. Let us get into the gameplay and loot systems first.

Godfall is all about ridiculously cool-looking and tight playing melee combat. The right bumper is your light attack, right trigger is your heavy, left bumper is for using your shield and left trigger is for activating special moves that are tied to the weapon you’re currently wielding. A is for dodging, B is for context-sensitive traversal abilities, X uses your lifestone (rechargeable use-based heal potion), and Y swaps between your two equipped weapons. Combat feels tight, though animations do lock in so you need to be patient and deliberate. Spamming things opens you up for massive damage and you can die quickly if you get greedy. The main ways of avoiding incoming damage are parrying by timing a press of the LB (which is quite generous in the window afforded) and using your dodge with well-timed uses of the A button. Dodge too early or late and enemies will quite often still hit you thanks to a bit of magnetism in their attacks. 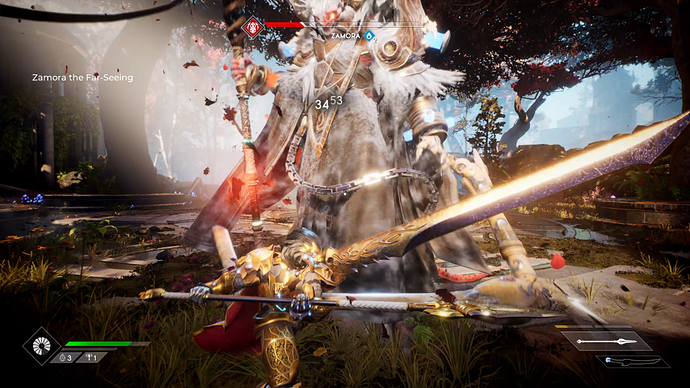 To aid you in your hack and slash mayhem is a deep and rewarding gear system alongside a fast at first but eventually, grind-heavy leveling one. Gear comes in a variety of non-cosmetic slots such as rings and banners to your quite different-looking Valorplates. These are the multitude of different looks you can earn throughout your time playing that each offer up a variety of unique perks. There is a lot new here from previous versions of the game as the Exalted update hit at release and changed a lot of the systems. If you tried this title back at launch in late 2020 there is a lot new here and from what I’ve seen it is being generally well-received by the game’s fanbase. Valorplates offer up various passive and “Archon Fury” systems. Archon Fury is, once you’ve filled up a meter in combat, you click in both sticks and activate a temporary buff for your character. Some may summon allies to fight alongside, while others will build up the Shatter meter on foes near them.

Shattering is one of the main combat mechanics of what is a very dense game. The basics are that right bumper attacks along with various other ones depending on your current setup build up a white “shatter meter” on enemy health bars. Attacks that use the right trigger will then shatter this meter and if it is enough damage to kill the enemy then they will explode. It’s a satisfying mechanic that plays well into the various buffs and passives that you can get on your gear and seems like a great way to get green health orb drops during combat. I could spend 1000 words talking about the combat systems in the game and barely scratch the surface. Just know that it is fun as hell even if you just want to swing like a maniac and can be incredibly rewarding if you dive in a little deeper. 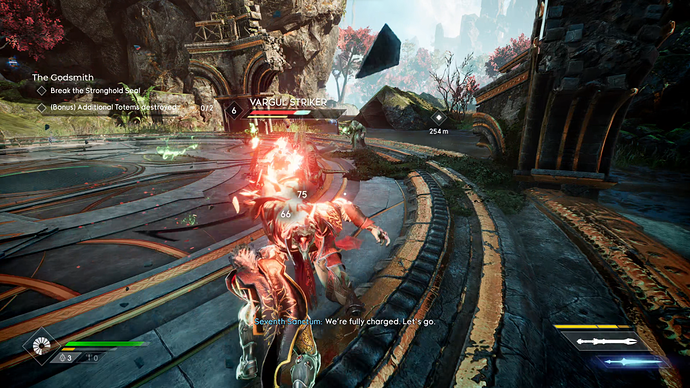 Good God, This Game is Pretty

I played on an Xbox Series X and the game offered up three different graphical modes. First is Resolution which runs at an unlocked framerate that felt like 45fps or so. Performance mode felt like a fully locked 60fps without much loss in graphical clarity. Finally, the (I believe Xbox Series X exclusive, but I’m not sure) 120hz mode was my personal favorite. There was a clear loss in graphical sheen but the combat felt incredibly smooth and responsive running at this higher refresh rate setting. No matter what you’re playing at though Godfall is a very good-looking game. Textures look high quality, animations are fluid, and particle effects are dazzling.

This high bar is matched by the excellent musical score from composer Ben MacDougall. A large number of tracks fill each mission with a sense of grandiose and wonder. The Voice acting is pretty good, but the writing is a bit off. The game does a really bad job of grounding you in what this world is, and I felt like I had been dropped into the end of Act 1 plot-wise after watching the opening cutscene. A fairly large number of names, either for places or people, are thrown at you non-stop and I felt overwhelmed pretty early. This game really isn’t about the story though, it’s about playing through the campaign alone or with up to two friends and then getting to the endgame.

Thankfully, Godfall: Ultimate Edition lets you jump right into a level 50 character if you are so inclined. I spent a very short amount of time tooling around as one and was blown away at how incredible the combat felt and how much there was to do. This newest edition of the game has added in even more content for the most powerful players out there as well.

The performance felt great overall and I ran into only one bug where I did the objective of a mission before the game was ready and I had to load out and back in to complete it. Load times are quite short averaging between 6 and 10 seconds for me. One minor issue was how I couldn’t skip through dialogue in the boring and pointless feeling in-between hub area segments, but they are fairly short. 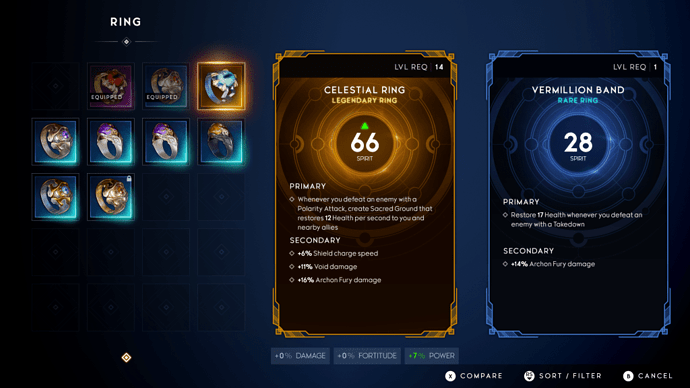 I’m shocked at just how much I have enjoyed Godfall. The melee combat is some of the most satisfying out there and the time since release has been well spent as they’ve rebuilt and tweaked what was a weak new-generation launch title into something far more substantial. It’s a fun title solo, but if you have one or two friends interested in not only the campaign but grinding out the endgame with you then this one is well worth your time.

I didn’t expect this positivity, definitely surprised. I’m not buying it anytime soon, if ever though, that’s just not something I’m planning. If it ever shows up on Game Pass though…

This game intrigues me, Im picking this up as soon it goes on a good sale. Great review!

This game has screamed Gamepass since I saw it. Definitely a missed opportunity for them to try and salvage what little playerbase is left from the PS5 and Epic exclusivity.

Good review! What I saw from you playing it looked nice, if it ever comes to Game Pass I’ll check it out.

Actually really glad Jesse made the time to give this a proper look. I no lifed this game over it’s opening weekend and never noticed the hours flying by. And was still fairly entertained throughout the following week. Though I’ve slowed down on it a bit now, I still got MORE than my moneys worth out of GF. I’ll say here as I told many online…if you had interest at any time before, feel free to give it a try. If not, maybe wait for gamepass (PRAYING this gets a chance on the service for greater exposure).

My only REAL knock personally is the unlock conditions behind exalting your valorplates. On the one hand it’s locked PURELY behind gameplay requirements. But on the other, calling it time consuming is SERIOUSLY under selling it. Will just leave it at this…if anyone plans to exalt even just ONE valorplate, you have a good month of on and off again grinding awaiting you.

Side Note: I wasn’t sure about it myself because I don’t use vrr. If anyone can confirm, is the 120 mode a LOCKED 120 or does the fps dip or drop at times? I tried it briefly myself but it FELT like it was chippy so I just went back to the 60 frame mode.

I mean I played it. I found it incredibly dull and generic. Level design was uninspiring and I regret forking out 30 bucks on it. It does look amazing and if you can look past the monotonous structure and play with someone you may have a good time.

I didn’t expect this positivity, definitely surprised. I’m not buying it anytime soon, if ever though, that’s just not something I’m planning. If it ever shows up on Game Pass though…

I’d be interested to play it if it came to game pass so long as it’s not their odd “skip the story and jump straight to the end game” edition like was on PS+. I know the story is supposed to be the weaker part of the overall game but it still reflects the core of the experience to me, I can’t imagine just jumping to any games end game straight away.

I mean I played it. I found it incredibly dull and generic. Level design was uninspiring and I regret forking out 30 bucks on it. It does look amazing and if you can look past the monotonous structure and play with someone you may have a good time.

Yeah the story is real bad, missions are just an excuse to keep fighting but I really enjoyed the combat a lot.

Very nice review! I definitely want to check it out but I’m selfishly waiting for a deep sale or game pass. The backlog is too big atm

Just a heads up today is the last day to grab this at a discount.