Forspoken has launched on the Windows Store with full achievements.  It’s an action RPG from Square Enix that PlayStation purchased at least two years of exclusivity on, but we’re covering it for our PC fans.  It is not a good game, in any single area, and it feels underbaked throughout.  Using the classic regular person transported to a magical land trope, you are Frey, a wisecracking career criminal from the worst depiction of New York I’ve ever seen.  Using magic PARKOUR and pretty but terrible feeling combat you’ll work your way across the world of Althia.  How does it run, is it any fun, and is the dialogue as bad as it seems?  Let’s find out.

I played this review on PC.  The windows store and steam versions of the game seemed identical and I mainly played on Steam as I had that code first.  Performance on my 5800x/6700 XT/64 GB of ram system was atrocious with how the game looks.  Running at 1440p and medium settings I rarely broke sixty frames per second while in cutscenes and routinely dropped to forty fps or lower in combat.  Those cutscenes are my biggest issue with the game.  You start off in New York, your character Frey is in legal trouble again and the world’s least believable judge lets her off with only community service for her third felony.

This version of New York is empty, ugly, and full of theater rejects masquerading as gang members.  Every time you get to walk for fifteen feet you’re pulled into another cutscene.  Sometimes they start with a fade to black, sometimes you stand in place for 3 seconds waiting for them to kick in.  It is jarring through the entirety of the game’s 8 to 9-hour-long runtime.  For the first two hours of my playthrough, I barely touched my controller, once I got it to work properly.  After stumbling around New York you randomly find a vambrace that transports you to a mysterious land full of Game of Thrones rejects. You are a chosen hero and it’s all entirely predictable plot-wise. Forspoken has the trappings of something much larger, with many predicting a 30+ hour campaign before launch.  It feels like so much was cut for time, with most of the open world being barren of anything interesting.

The fact that the engine can’t even go from outside to inside for most locations during cutscenes and instead does a slow fade to black/short load/fade back in is ridiculous.  This happened in one scene where a door was being blown off the hinges.  The door was hit, the game faded to black, came back a few seconds later, and resumed outside.  There is something fundamentally wrong with the Luminous Engine as this game looks and performs far worse than Final Fantasy XV did on far weaker hardware. No part of this game feels fully formed especially the combat.

The main thing I remember from the original teasers of Forspoken was the magical parkour movement system.  It looked fast, cool, and fun as hell to dash around like a methed-out wizard.  In practice, it is constantly frustrating, slow, and hindered by terrible world design.  The combat fares no better with an emphasis on flashy spells but your actual control in combat feels minimal at best when things get frantic.  On your right trigger are offensive spells.  You either hold it down and let go or press it quickly to change things up slightly, and it never feels responsive.  Your left trigger controls your support spells and they start with maddeningly long cooldowns.  To access new and more powerful spells you’ll need to level up or, and this drove me crazy, find puddles of magic on the ground.  Getting these ticks up a number with which you can unlock or upgrade spells.

It feels like the experience-based leveling system wasn’t working, so they got together and decided to just throw a bunch of ugly swirling white textures out into the open world and call it a day. These mana fonts are one of the few things you’ll find in the world, which you’ll traverse by holding forward and B.  That activates your parkour in the open world and pressing or holding B during combat is an “I win” card for free never-ending dodges which massive invincibility frame numbers. Playing on the normal difficulty I rarely felt close to dying, and the few times I did the game gave me a get-out-of-death-free card on a short CD where your sentient vambrace automagically blocks the killing blow.

Combat wise the game becomes you constantly using the bumpers to scroll through your spells, tossing them out, then holding B to dodge a bunch.  It never feels tight, fun, or satisfying in any way. The fact that it takes so long just to get through the 3 or so hours of cutscenes to then be stuck playing something so poor feeling only added to my frustration.  Perhaps the biggest thing Forspoken has been known for is its dialogue, though.

Frey has a potty mouth, and her go-to words of choice are sh!t and f*ck.  She says them a lot and at weird times.  I’m no saint, and I swore quite a bit while playing this game too.  The issue with the dialogue isn’t just that it is routinely awful, it’s that the direction behind each cutscene is even worse.  Odd camera angles, constant fades to black, a jarring lack of music at times, and truly terrible ambient sound/crowd noise team up to make something dreadful to watch.  I streamed the first half of my playthrough and I had lost my voice by the end of it. It’s an extremely frustrating experience, to constantly lose control of your character. Even in the open world while running around with the magical parkour system I would constantly get stopped for a tutorial or cutscene and I never once cared about the story.

Character motivations and their abilities constantly shift to serve the narrative. In one scene things were going bad, something very important was on the ground in front of me but Frey refused to pick it up for an insane reason.  Next thing you know I can’t go back because that important thing has been destroyed when it was completely avoidable logically.  This game was delayed a lot but it still feels like so much was cut to make launch. That goes for the graphics and music as well.

Graphically Forspoken is an ugly game, due in large part to its terrible lighting system and inconsistent texture quality.  Main character models can look odd and wooden then a side character comes along and she’s damn near lifelike.  Bloom on PC feels completely out of whack with you the outside of a house being completely blindingly bright while you’re inside. Once you head outside and the game adjusts it feels dreary and overcast.  The skyboxes are all low resolution, hideous textures full of rainbow barf.  The one area that can look great are the particle effects, but they’re terribly optimized and brought my decently beefy rig to its knees even when I was running at 1080p medium settings.  The soundtrack doesn’t match the tone of the dialogue well, where it is deadly serious but the story isn’t. The same few main themes play through almost every time, with a woman moaning “yaaaaaaaaaa” being in nearly every damned track the exact same way.

I came into Forspoken unsure of what I would find. Its initial teasers promised a gorgeous magical world full of incredible sites. Instead, we’ve been given something boring, that runs terribly and has a story full of overused tropes. The combat fares no better, and it’s retailing for $70 at launch. Do yourself a favor and only sate your curiosities once this game is on a deep sale. 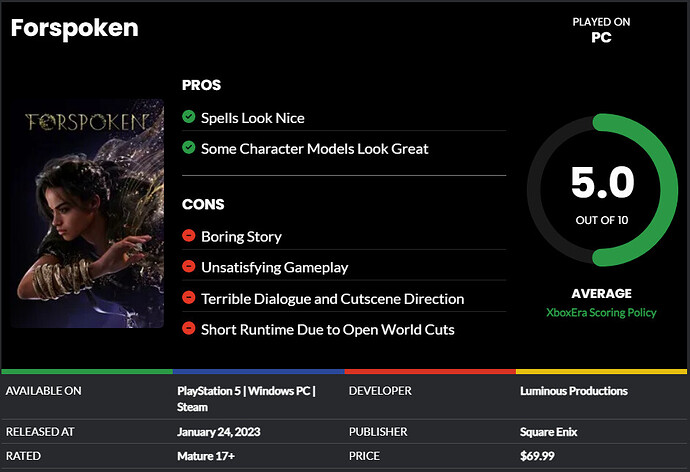 main review has screenshots, no clue why discourse doesn’t pull them in

main review has screenshots, no clue why discourse doesn’t pull them in

Probably because they were added as galleries in the article, so Discourse ignores them during the import.

Probably because they were added as galleries in the article, so Discourse ignores them during the import.

If anything 5/10 feels like a generous score after reading the text of the review!

Seems like kind of a shitshow, which is a bummer. Like the review said, it certainly is a move to have it retail for 70 USD…

Great review as usual, albiet generous giving it a 5!

Your livestream was highly entertaining (for all the wrong reasons). 5 seems generous. I got the impression of a game in early alpha stage where you can play from start to end but the gameplay loop and other stuff still needs lots of polish end refinements.

I’ve only seen a few seconds of dialogue and I can stand quite a few things, this however I wouldn’t be able to stand for a long time. Good lord what horrible dialogue this is. The bullshit she says during these fights, ridiculous, who says these things? Nobody. Geralt in Witcher 3 talks during combat sometimes too but at least it makes sense, lol.

I know this isn’t a Sony exclusive, but they sure love their overly chatty characters, jesus. And I see some people online saying this is like Marvel. Nah, Marvel dialogue is miles better than this, lmao.

Looking through other reviews of this title, it seems like some of them were given a game-save that was already 3 hours into it, or possibly later where they were even more leveled up and further along.

Looking through other reviews of this title, it seems like some of them were given a game-save that was already 3 hours into it, or possibly later where they were even more leveled up and further along.

whaaat? where have you seen this?

I mean i watched the first 3 hours on Xboxeras stream and if i were the publisher i would absolutely do this. But come on!

whaaat? where have you seen this?

I mean i watched the first 3 hours on Xboxeras stream and if i were the publisher i would absolutely do this. But come on!

I’m not saying that is the situation, or that it absolutely happened, or that any of them said they had a game-save 3 hours in. I’m only saying “it seems like that”.

Mainly, I’m going off other reviews that said the game was fun. I don’t know how anyone can go through the first 2-3 hours of that and not have the experience be negatively impacted. So to me, it seems like they somehow skipped that entire section.

I hope that clarified things.

I encountered this clip on Twitter and this gave me weird “Xbox 360 game you found in the bargain bin in 2006” vibes. It’s somehow reminding me of a game like that. 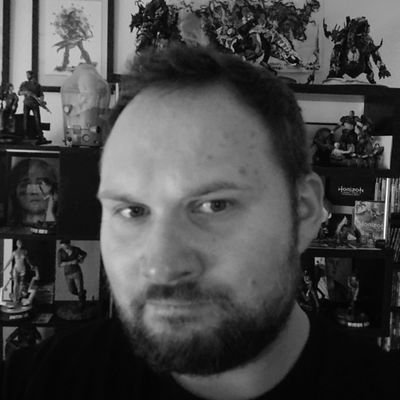