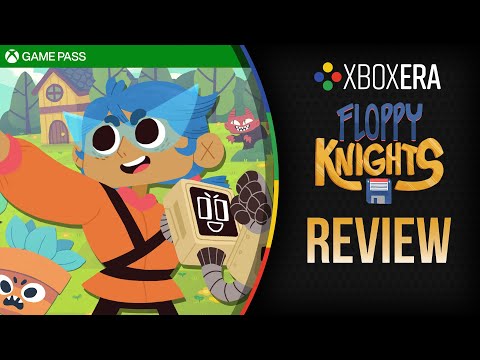 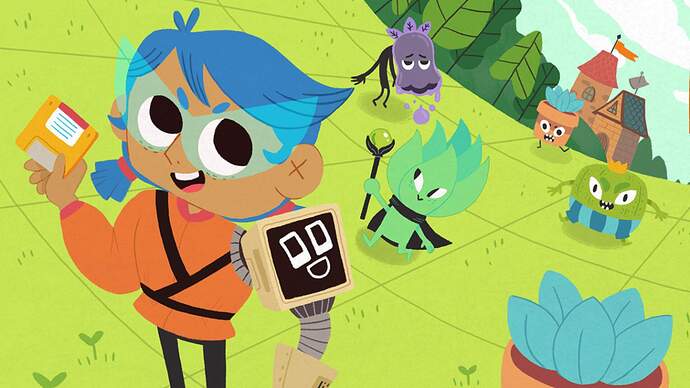 Floppy Knights follows the story of Phoebe and her hyper-intelligent robot arm named Carlton. She is an inventor and her latest creation are the eponymous Floppy Knights. These digital creations help her beat up goblins, stop volcanoes from erupting, beat up a monstrous tree that is shooting out fog, and try to win science fair competitions with never-ending violence! Using a smartly crafted and well-balanced card-combat grid-based system, is this day one Game Pass release worth a download? Yes, if you have a lot of patience. 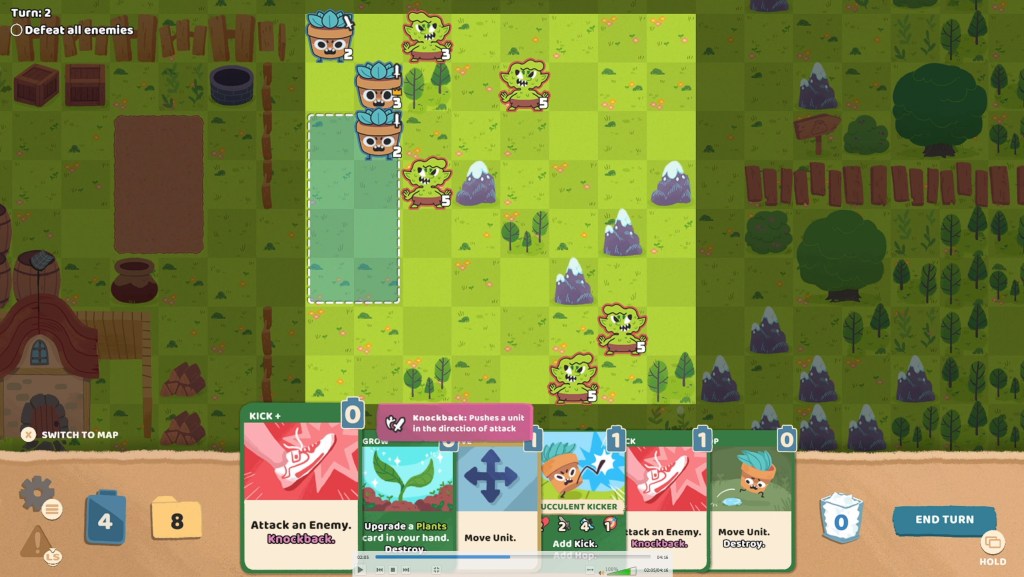 Throughout your time in Floppy Knights you will be working through a few slow to animate and load menus as you build up various decks that best suit each level’s unique challenge. This game requires a ton of patience as it is not only quite difficult at times but everything is slow-moving. Each deck has a similar setup with a Captain at top, who if they are defeated ends the round, a handful of “must be in the deck” cards, and then a choice of however you would like to set the remaining empty slots until you have a full deck of 30 (or less if you so desire). As you progress through the game’s 27 story and 24 challenge missions the amount of choice you have over just what your deck can be is staggeringly dense. There are multiple decks to unlock throughout the campaign which you can then take in to the challenge levels, which are even more difficult to try and complete. Just what are these decks though and how does this game play?

The decks are a collection of character, movement, buff, and attack cards that come in a massive variety. The characters span a vast selection of plant, monster, and goblin types with various focuses on melee, ranged, and support characteristics. You will need to learn what each of your characters can do to find the proper combination for the more challenging levels or you will slam your head against the wall time and time again. I spent nearly 3 hours trying to beat a mission with my favorite plant deck, only to win on my first try with a monster-themed one that was all about taking damage and building up my attack stats. Each character in your deck has a different set of stats such as how much damage they deal, how far away a target must be for them to attack, how many grid tiles they can move per movement card played, and their total health and armor levels.

Again, I cannot overstate just how much you need to read and remember in this incredibly defensive-minded game. Your captain can go down in a single turn quite easily if you put them in too much danger. Everything is turn-based, with the player character typically going first. A wide variety of different mechanics are introduced and built upon as the well-written narrative goes along. This game is quite deliberately paced, and that includes how you are expected to play if you want to win. A few scenarios dictate aggression, but overall every turn needs you to focus on keeping your cards alive, or else you can quickly become overwhelmed and lose 30+ minutes of progress because this game has no checkpoints during a match. 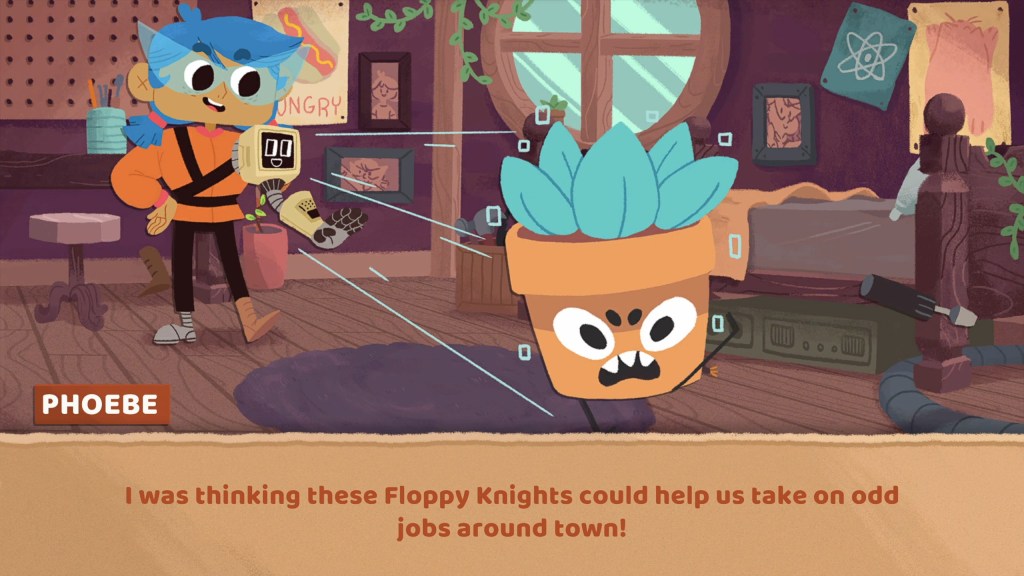 Let’s Do The Time Warp Again

That ultimately has been my biggest frustration with Floppy Knights, its’ lack of respect for my time. As it is a turn-based system you must sit and watch as the computer takes its turn each time, and it’s not fast. Nothing in the game is, from the menus loading to the fact that if your captain dies at any point of a match, even ones that can take 45 minutes to an hour, you lose and must restart from the beginning. This game is tough and learning the right deck for a match can take a while, so this is incredibly frustrating. The matches are simply too long sometimes as you’re learning them, and in one of the toughest end of level missions, I spend just over 3 hours finally beating it in a match that took 55 minutes. One of the best things about a game like this is jumping in for a quick session, but it’s not designed like that. If you’re doing something new you must be ready to truly commit yourself to it or rely on quick resume with the Xbox Series consoles. There are a lot of positives to the game, though.

Through the use of monster spawners on the playing field designed to keep you on your toes and not be too aggressive. Every few turns a new monster will pop up and start heading toward your team. Finding combos to instantly take them out when possible was quite fun and really made me vary up my tactics. Floppy Knights has a lot of smart ideas, and I found it well-balanced overall. The mission length was far more frustrating than figuring out the best way to beat each one, and the various decks play differently enough that I never grew tired of the rather basic gameplay. The energy system will be familiar for fans of the deckbuilding genre, though this is not a roguelike. You have a set deck but there are no random elements for each run, just a straight narrative with levels that behave the same every single time. 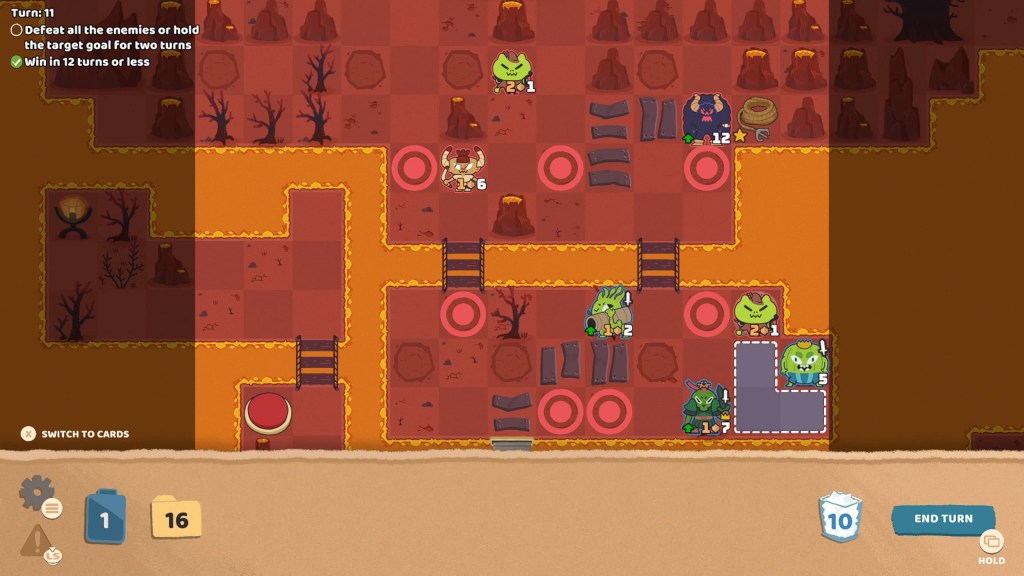 Knights of the Round Table

The controls took some getting used to before I felt comfortable. You’ll be using the left bumper and your triggers a lot to jump between the board and your hand, and remember that you must choose a card and then use it on the character THEN you click where on the board you want them to go or attack still gets me even as I start clearing through the challenge section. I pressed the wrong buttons a lot and it took me a while to learn exactly how the range system worked, but I’m pretty sure that was my fault as the game’s tutorial is well made.

The main mechanic is you click a card in your hand, click the character on the board that you want it to affect. If it’s an attack card the board will gain red lines on squares at which the character can attack (set by their range stat), if it’s a movement one then white tiles are shown and you can click them to indicate where you want to move to. Buffs or heals will be used instantly and all of this is dictated by the energy system. Each card has a set energy cost and you begin each turn with a set energy amount. Some cards can return energy to you, and so on. It’s all pretty standard for the genre if you’ve played almost any other deckbuilding game, of which Game Pass has many excellent ones.

The music is pretty good but really energetic and loud, so I ended up turning it down to a quarter of the max level in the settings. Writing is as previously noted quite good, with some genuinely funny lines mixed in. I didn’t find the narrative too engaging overall, but it was just enough to keep me going. I quite like the graphical style of things, especially the various ridiculous faces that Carlton makes depending on what he’s saying, but technically it’s pretty basic. I didn’t run into any bugs at all during my playthrough on a Series X, and a patch from the devs promised to fix up most of the balancing issues I had noted during my playthrough before full launch. 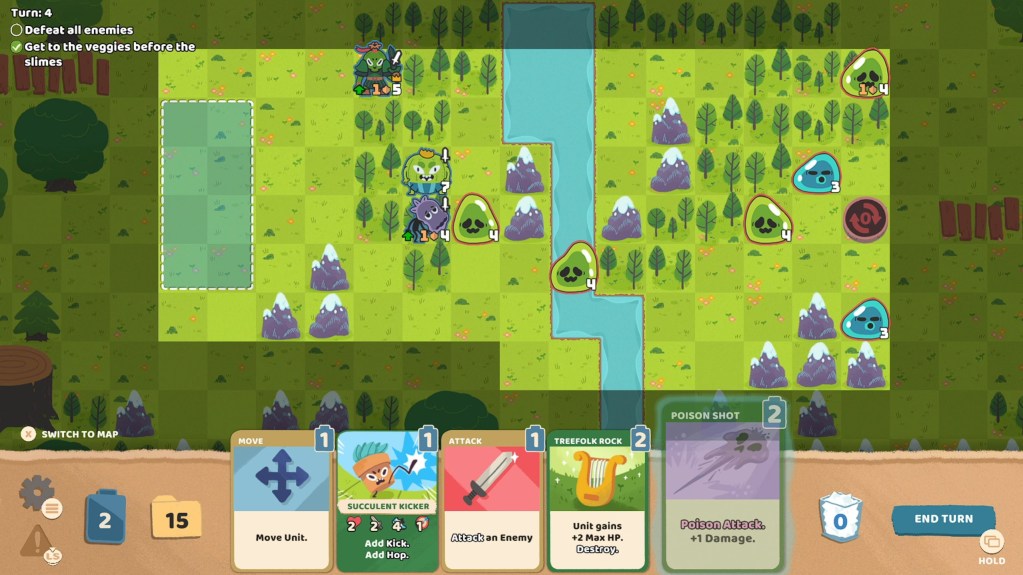 Floppy Knights is a fun game that is really close to being a great one. Its major flaw for me is how long everything takes. From mission length to waiting on enemy turns, and the slow loading of the menu system it can be a drag. If you’re able to get passed all that though there is a clever deck builder here, with real challenge, great writing, solid music, and it’s available at launch on Xbox Game Pass.

This game is not for me and the informative review helped me reach that conclusion, as a good one should. Keep up the good work!

Mort is correct, the same methodology that seems to think .0 or .5 is better than anything else. In the end it is just a feeling, no science behind it, and the bonus is that it annoys certain people