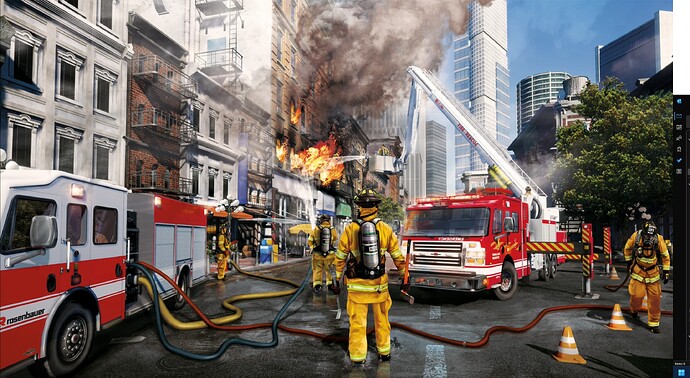 Firefighting Simulator – The Squad is the latest in our series of reviews covering the surprisingly popular “Simulator” genre. Unlike the rest this one almost feels like a modern video game, both graphically and performance-wise. Let’s get our hoses out and spray down the walls together as we break down the almost decent game that is Firefighting Simulator: The Squad.

The first thing you’ll notice in this title is that graphically, it’s almost good-looking. That is high praise for the simulator genre, which tends to live in a “these graphics were mediocre 20 years ago” bubble. FFS: The Squad looks decent most of the time, and has a sixty frames per second target that it manages to hit more often than not. It is the classic simulator setup, where the story is non-existent and each new first serves to teach you, game mechanics, early on. You’ll be able to choose if you drive to the fire or spawn in already there. The driving feels awful, and I skipped it every time after the first few trips.

There are a large number of tutorials to help you learn how each system works, though I didn’t find them necessary. Once you have spent a little bit of time with your truck and know where the equipment is stored things are easy enough to figure out on your own. Basic things like “grease fires need co2 and not water” are told to you mid-mission, and learning how to hook up your hoses is simple enough once you’ve done it a few times.

This isn’t the most realistic game, as the fire physics system needed for that would be far beyond the budget here, but it does try to at least make sense most of the time. Where it fails to make sense is how fire behaves, both in how it spreads and how you extinguish it. The fire in the game is pretty ugly and is obviously confined to specific zones that can vary in shape depending on the material. While quenching the fire you’ll see multiple fire icons that get smaller as you put it out. Where to aim your oddly gelatinous stream of water can be tough to discern and the main act of the game never felt satisfying.

I found myself enjoying setting up and preparing to put out the fire by diking around my truck to be my favorite part of each mission. The act of hosing down fires with my mighty spray was hit or miss, with a loose aiming mechanic. Smashing in doors & windows, or carrying unconscious people to the same ambulance over and over again became boring as well. Sadly, everything surrounding this mediocre gameplay is varying shades of bad as well. There isn’t enough variety in the types of missions, though there is a large number of them.

A big part of the game is its four-player co-op. My first attempts saw me matchmake into a few games and it ran so horribly that I gave up within a few minutes. They were lag-filled, stuttering messes that were impossible to clear in time. After that I got into a full match with 2 other people who seemed to live at least somewhat close to me and it was a decent experience. If you have a group of friends who all have a fetish for wearing flame retardant suits and spraying each other down when things get too hot then I could see this being a good time for an hour or two.

Thankfully the game is entirely playable while solo, as three ai powered companions will clumsily do almost nothing that you ask them to. In the end, I would give each of them a hose and have them follow me around, where I’d get to see them spray the wrong walls or walk in circles as I took care of all the fire. In the outdoor environments, they could get some things done, but indoors they stumbled around like drunk babies most of the time. 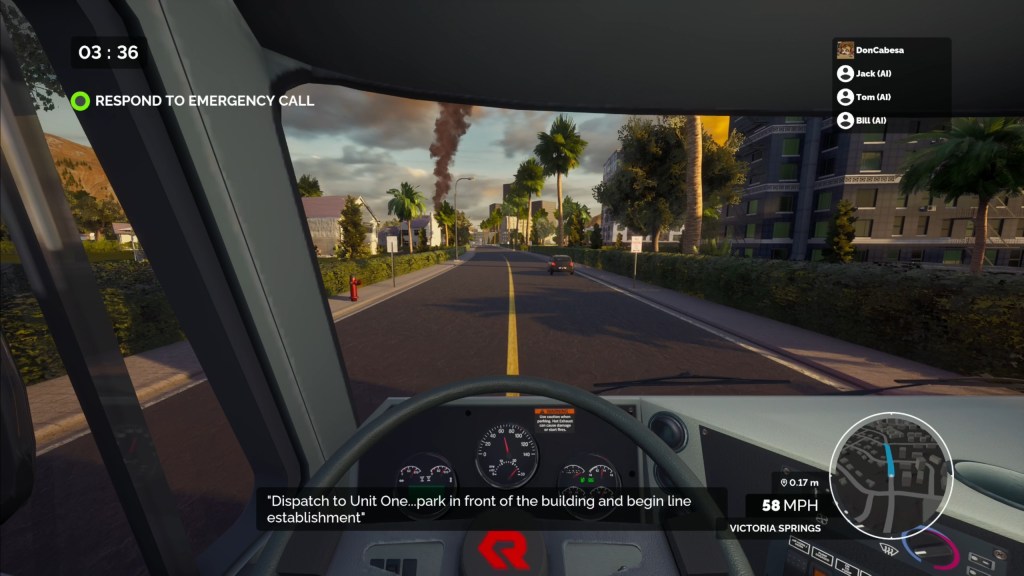 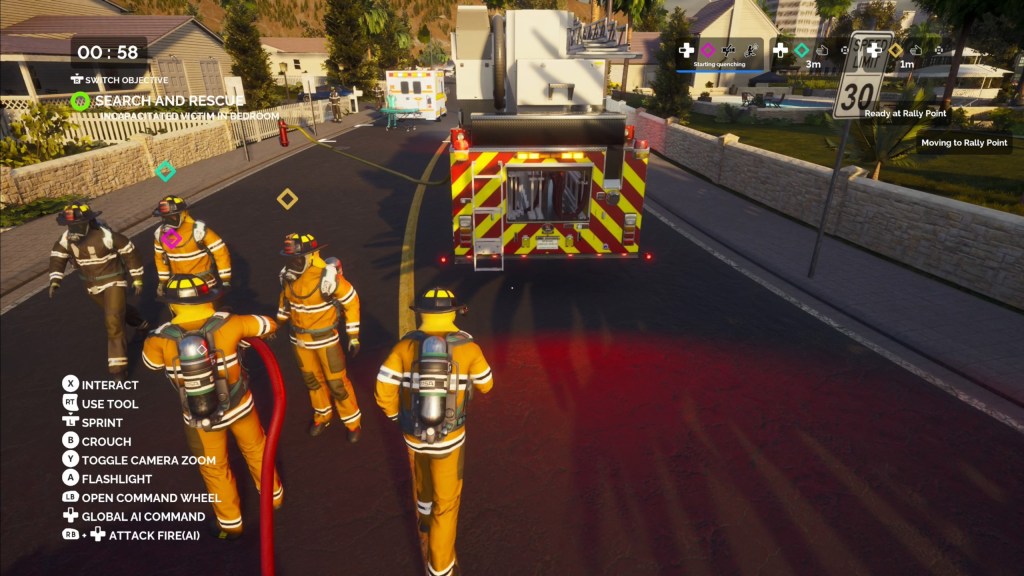 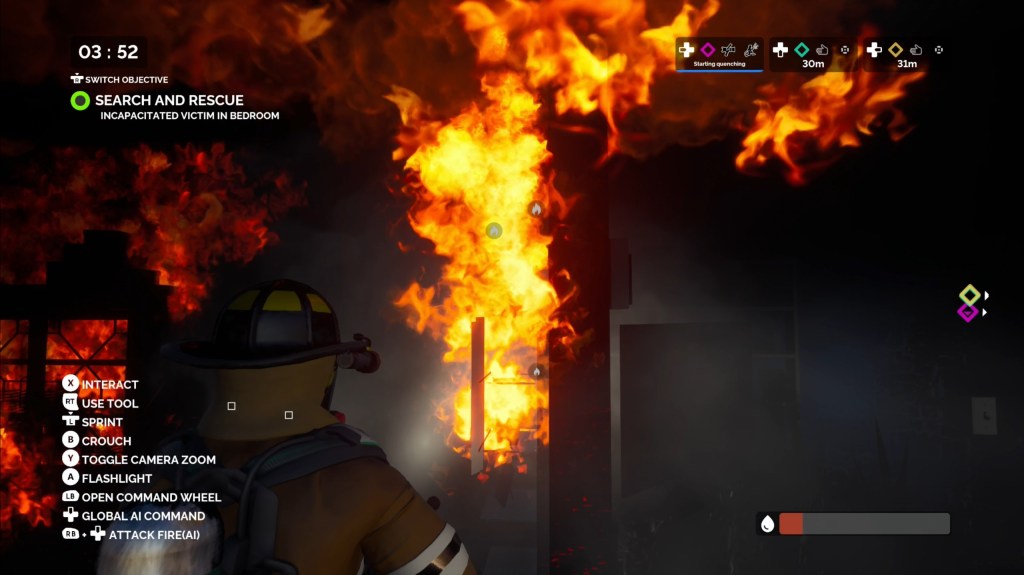 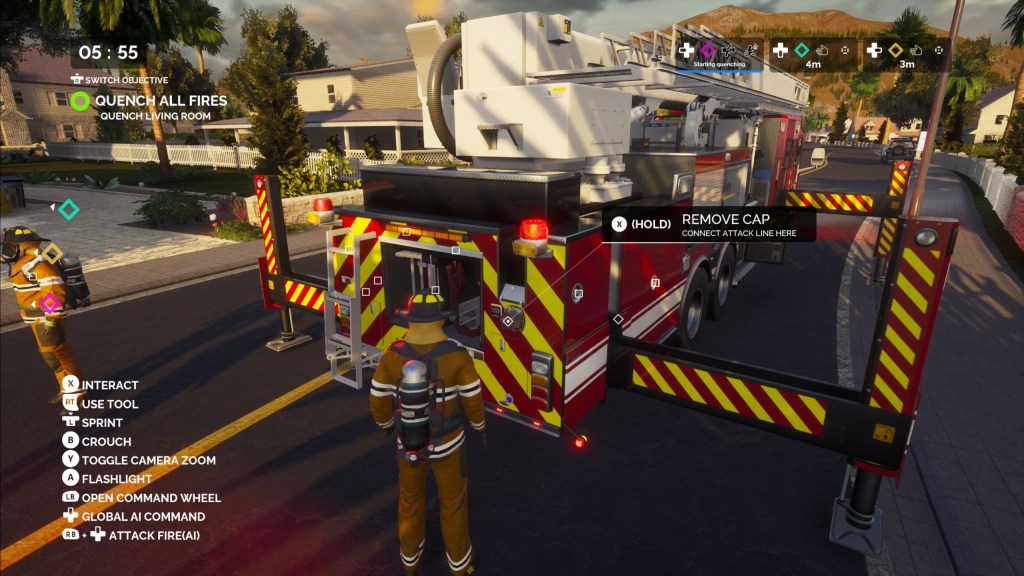 The graphics overall are a step above the typical simulator genre fare. The game doesn’t look good compared to most modern titles of any quality, but it’s on the low end of mediocre. Compared to most games with Simulator in the title it’s damned gorgeous. The framerate suffered immensely when a large number of particle effects hit the screen, and a few times I had it dip into what felt like the teens for an extended period of time. When that wasn’t the case though the sixty fps target was a smooth and clean-looking experience. Music in the game is minimal, and there is no voice acting or writing of any sort. You go to houses, save people, and then the mission ends, rinse/repeat. The game is also $30 at launch, so you’ll want to make sure you really love the idea of a mediocre firefighting game before dropping that much on it. 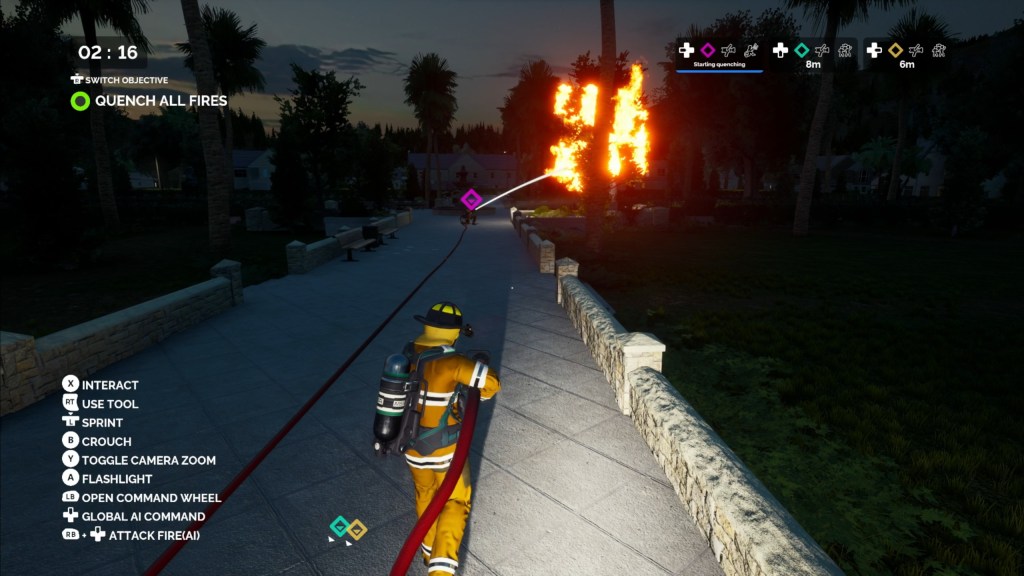 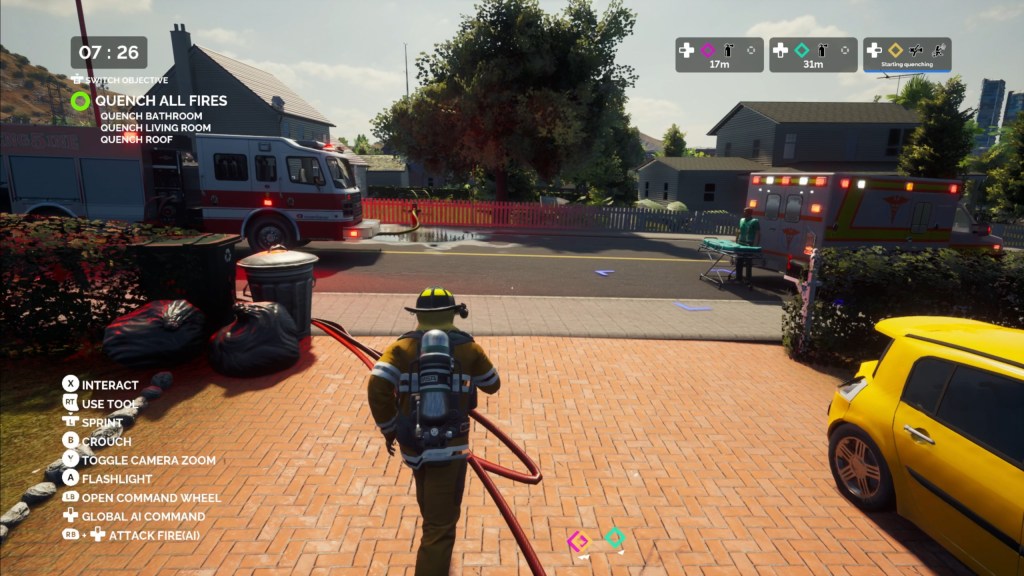 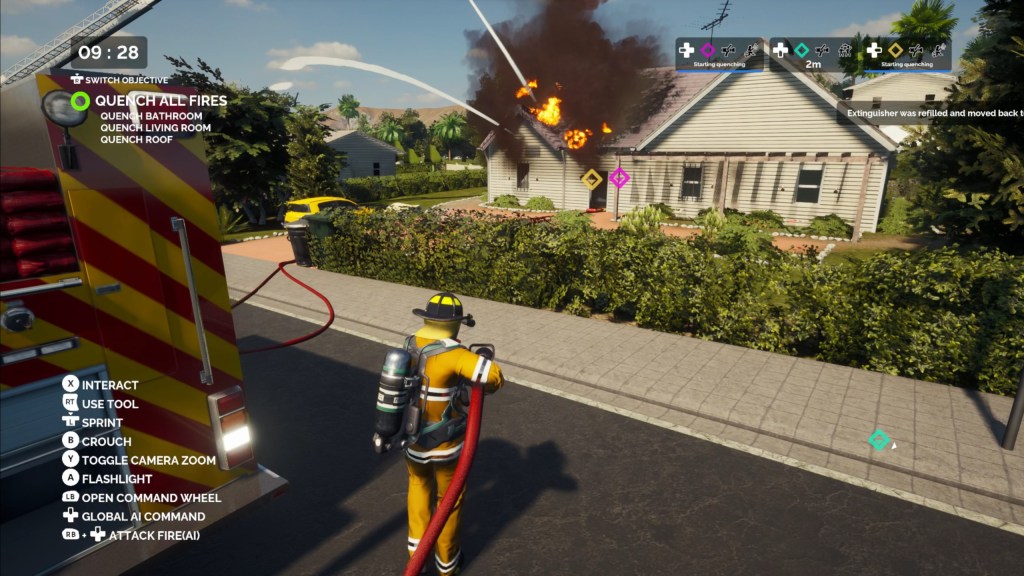 If you love the idea of taking a floppy tube, pointing it at something hot, and spraying all over it until everything is cold and you’re filled with regret then FireFighting Simulator: The Squad can be done alone, but it’s far better with some friends. 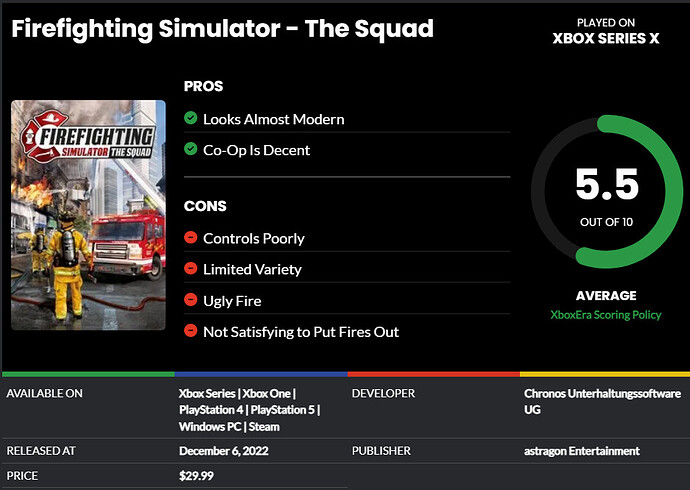 Nothing beats the OG firefighting game. (Okay I barely actually remember if it was even good or not) 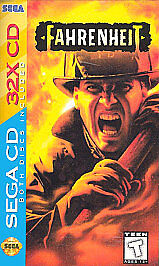 Kind of a shame. I’d never thought of it before but I bet a firefighter game could actually be pretty good/intense.

Kind of a shame. I’d never thought of it before but I bet a firefighter game could actually be pretty good/intense.

Yeah, it just requires really good fire physics and this one doesn’t have that.