Fallen Legion: Rise to Glory is a sidescroller roguelike developed by YummyYummyTummy and published by NIS America. The game takes place in a war-torn Fenumia where Princess Cecille is left to take the throne after her father falls in battle. “Gifted” with a talking grimoire that was once a part of her father’s cabinet (there is a pun to be had here), players will help Cecille progress through the various stages that take place across the country, battling foes with the help of Exemplars—manifestations of heroes brought to life by the pages of the Grimoire.

On the other side of the story tells the tale of the general Laendur, who seeks to usurp the throne from the princess in a bout of betrayal. Players can choose to start with either side of the game’s story, but the gameplay will largely stay the same. With the way the narrative is presented, the game hopes that the players will decide who is good or bad, but it doesn’t do the best job of presenting context for such morality. Despite that, there is fun real-time sidescrolling engine here that really carries the game alongside the visuals and limited voice acting,

The meat of the game is Rise to Glory’s gameplay, which I can best describe as a Final Fantasy ATB-like system, where players command multiple units to attack so long as they are available to do so. These units are called Exemplars, and there are quite a number of them throughout the game that the player will battle and eventually unlock. Exemplars all have unique skills that, in conjunction with gemstones imbued with power and other various game mechanics, let players build a dream team of units they feel comfortable with.

Things do get a bit more involved than that, however—Players will also have to time blocking incoming attacks from enemies, who will attack at random and sometimes hit very hard. Taking damage resets the combo bar that fills as you attack, preventing you from unleashing your Exemplars potent skills known as Deathblows—specials that can afflict enemies with debuffs and/or deal a great amount of damage. On the flip side, blocking as soon as your foes strike will usually leave them defenseless, leaving them open for a good thrashing.

This combat system flows really well because it punishes button mashing and forces the player to observe enemies. When you attack or defend can really turn the tide of battle for either side of a combat encounter. Enemies generally telegraph their attacks well, with easy to identify opening attack animations and sound effects, ensuring that fights don’t feel cheap. Of course, if the player wishes to and is capable of blocking at the right time, they could button mash through encounters. But it’s better to wait and decide which attacks from specific Exemplars to dish out for maximum damage and fewer button presses.

A downside to the overall gameplay is that stages more or less play the same, with differences stemming from mob variety and order in which they appear. It can get repetitive, even in the game’s optional one life mode. 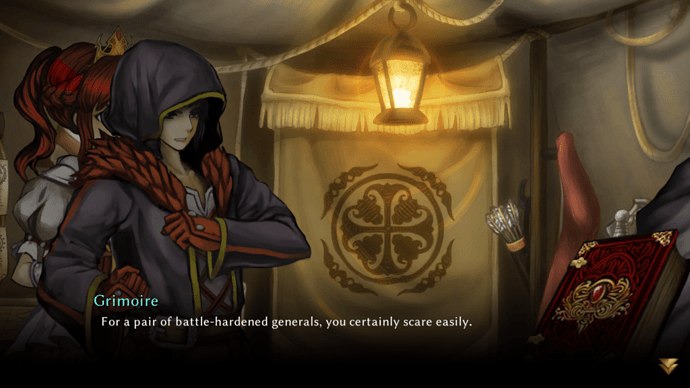 Foreign Affairs are a Head Scratcher

Another effector of combat are story choices made throughout stages that effect the people of either the general or the princess: timed options that correlate a specific scenario to a bonus that can be applied to your party during the stage. These can be great boon at the cost of or benefit to morale, which can provide health bonuses to your Exemplars. Characters will also appear during said stages to explain the consequences of your choices.

I found this to be the weakest aspect of Rise to Glory, as the game thrusts the player into the midst of a story and then asks them to read plenty of story logs to understand what’s going on. Thankfully they’re not on the level of Blazblue’s lengthy encyclopedia reads, but neither do they really help contextualize the choices you make, and I often found myself either choosing a choice for its bonus over the consequence and still found the morale of my people going up. Without setting up the proper 5 Ws and presenting them overtime, good story telling is basically a lost cause. On the bright side, the moment to moment dialogue is short, sweet, and to the point—even if I didn’t feel attached to the characters.

Fallen Legion: Rise to Glory features a solid arcade-like gameplay engine, even if the repetition and poorly told story weigh it down. Still, I’d be hardpressed to find something similar that can scratch the same itch that this game does: an advantage I think the developer YummyYummyTummy should build and iterate on for future instalments.