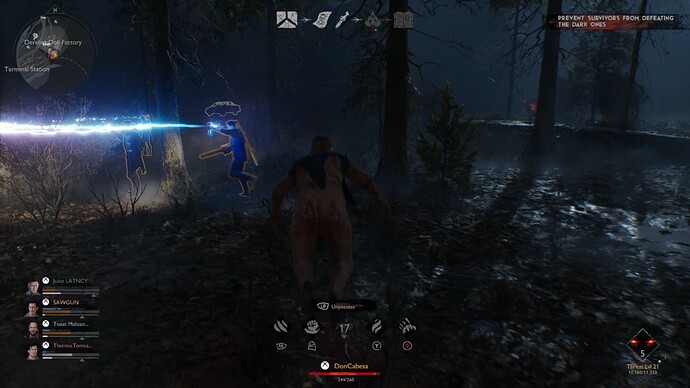 Saber Interactive has finally released Evil Dead: The Game. It features the 4v1 player-versus-player gameplay that recent titles Friday the 13th and (especially) Dead by Daylight have made so very popular. With more of a focus on combat, both of the ranged and melee variety and brilliantly using the Evil Dead IP to its fullest, they have managed to make something pretty damned fun. There are a few missteps along the way as well, so let’s get into the good, the bad, and the groovy. 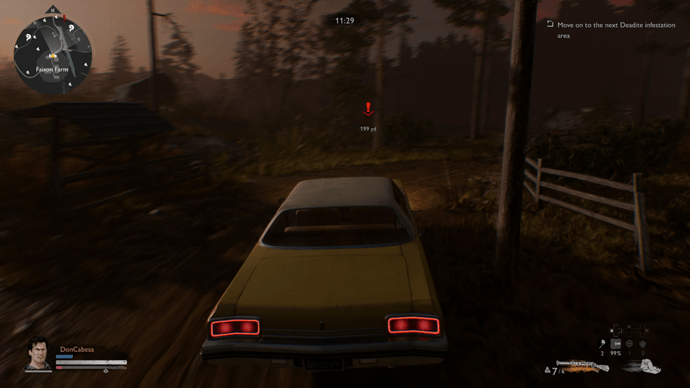 Evil Dead was originally released back in the age of the dinosaurs (for today’s Zoomers at least) a.k.a. 1981. Throughout 4 movies (with a 5th due later this year) and a Mid 2010’s TV show Sam Raimi and Bruce Campbell introduced us to at first a very scary and then more focused on comedy world filled with demonic possessions, talking decapitated heads, evil hands, and more walking deadite than you can shake a stick at. Evil Dead: The Game smartly makes use of all the movies and the show outside of 2013’s franchise reboot. Bruce Campbell’s Ash Williams is the main attraction here both in the single-player missions (more of a tutorial mode to unlock the entire roster), and the game’s main attraction which is that 4v1 PVP mode.

The roster ends up featuring 4 different versions of Ash, one for each of its roles. Those roles are leaders who focus on taking and dealing damage while buffing those around them in various ways. Warriors who can pack a wallop against the hordes of the undead. Hunters who rely more on their wits to banish the dark, and finally support who… support the team! With Ash, you get a version of him from Evil Dead, Evil Dead 2, Army of Darkness, and Ash vs. Evil Dead (tv show). There are 13 characters total once unlocked through the game’s missions mode, and more are purported to come along with a new map in the future through DLC.

The survivors will face off against three potential enemies. First up is the Warlord group of demons. Henrietta and her grotesque and naked form is joined by a bevy of zombie-looking demons with a focus on traps and direct deadite damage. The puppeteer is a toothy, gimp-looking group who focuses on possessing both demon and survivor alike. Finally, and seemingly most popularly, is the Necromancer group led by Evil Ash from Army of Darkness. Skeleton hordes who can be raised by Evil Ash constantly deal damage and add to the survivor’s fear levels throughout each round. Just what is the setup for all of this though? 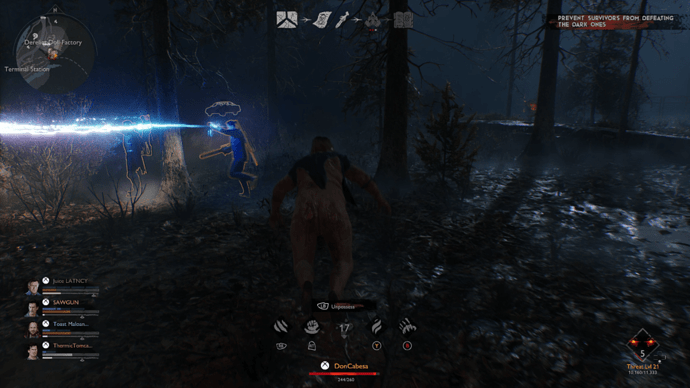 The main focus of this game is the four-player survivor team attempting to defeat the single-player demon horde. Rounds always have the same goals. First up is finding the three pieces of a map with the only clues being the name of the location you can find them in on the map. After finding those map pieces you’ll then have to procure the lost pages of the Necronomicon in one area and the Kandarian Dagger in another. This is done by running up to them, activating the event, and staying close enough to them so that a meter slowly fills up over time. While all of these goals are happening there is a generous timer ticking down. If this ticks down to zero before you have the pages and dagger then the survivors lose. If you get these two items then you will need to use the dagger to banish the “Dark Ones”. A group of demons protecting the Necronomicon. If you can successfully hold down Y near them long enough to essentially Ghostbusters beam them back to hell then you must protect the Necronomicon until the short-timer reaches zero and the book’s power sends all of the Demons back to whence they came!

It sounds like a lot but it’s always these same goals so you quickly get used to the flow of a map. Playing almost entirely with matchmade groups the matches themselves generally played out a few ways. If we stuck together we could quickly find the map pieces while stocking up on the weaponry and use items littered around the map. If all 4 players ended up running in different directions the player-controlled demon could far more easily harass us until our fear meters went high enough that we were able to be possessed and things would get really ugly. To lower that fear meter you need to both stay close to your teammates and find or create sources of light.

The map is filled with houses and businesses that can have a mix of ranged and melee weapons, along with amulets that refill your shield, or soda that refills your health meter. There is also a per-run upgrade system for demons and survivors alike. Demons gain levels from performing actions and players need to find supply crates that will drop upgrade points for each survivor. Each character has things they excel in and finding a good group comp can make the early game a breeze if you’re facing off against a low-level demon player. In my roughly 15 hours so far, the survivors only failed to win 3 times, though those all did come against demon players who had leveled up their characters at the meta-level outside of the matches.

Every matchmade or fully private match you play will earn you spirit points which can be turned into upgrade points for whichever character you want. The overall leveling system at the outside a match level is well organized and easy to understand, something I’ve noticed is very much not the case in Dead by Daylight, the current king of the genre. I played a lot as the demon and after a few upgrades, my Henrietta-led horde became noticeably more capable at both dealing damage and raising fear levels. Matches tended to last between 20 and 30 minutes and the grind for meta-levels was a bit long but still felt rewarding. If every survivor dies then you lose, and the game can be played with four human survivors vs. ai as well, though this doesn’t gain you experience. 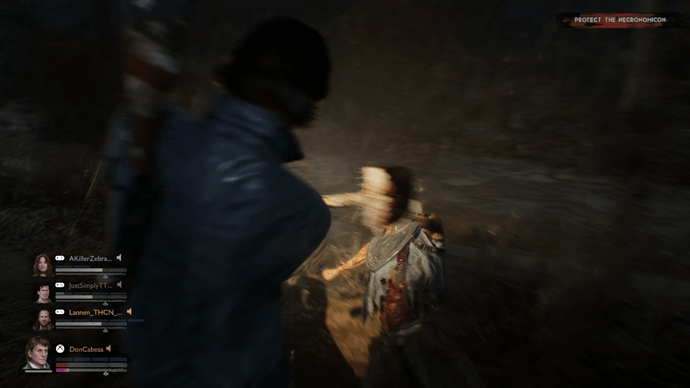 Gameplay-wise this is much in the style of Evolve with its emphasis on action, at least as survivors. The demonic entity is generally in a wraith form, straight out of the movies. Playing as a demon you’ll fly around the map at a rather high speed, and invisible, as you pick up infernal energy and set a LOT of traps. My best strategy as the demon would be to ignore the survivors in the early game and instead trap every single place I could around the book pages and dagger. These traps can both deal damage and scare the survivors so that their fear meter rises quickly, and they become susceptible to possession.

On the survivor side of things, it’s a 3rd person action brawler. You’ll pick up various ranged weapons from revolvers to boomsticks, and melee weapons such as hatchets and chainsaws (Ash only on the latter). Combat is deliberate and at first, your ability to dodge is rather limited. You want to main a character as the upgrades will make an enormous difference as time goes along and the player pool is filled with more and more high-level characters. I wouldn’t say the combat is great at any point, but it’s better than average for the genre and feels fine most of the time. It can be frustrating though in the missions.

The single-player-only missions feature five (at launch) missions which can unlock multiple characters and voice recordings. As of the time of this review I still haven’t finished them and unlocked the last two characters as they’re long, feature no checkpoints, and can be wildly unfair at times. Hopefully, they are patched into a more enjoyable state soon, because the characters they unlock are all really fun to play as. The game features either the actors themselves or soundalikes voicing lines which is great fun until you hear the same sound drop for the 400th time (that round!).

Graphically the game looks average at best. It is a muddy and grimy-looking affair. The lighting system works well for the dark settings but a lot of the texture work for the environment and some of the enemies look last gen. The deadite deformation tech is appropriately horrific with limbs and chunks of flesh flying off in all directions as you deal damage to them. The music is appropriate for the Sam Raimi led part of the franchise and I never grew old of the main menu theme despite it being rather short and on a constant loop. The game also features crossplay between Xbox, PC, and Playstation which is happily becoming the standard nowadays. 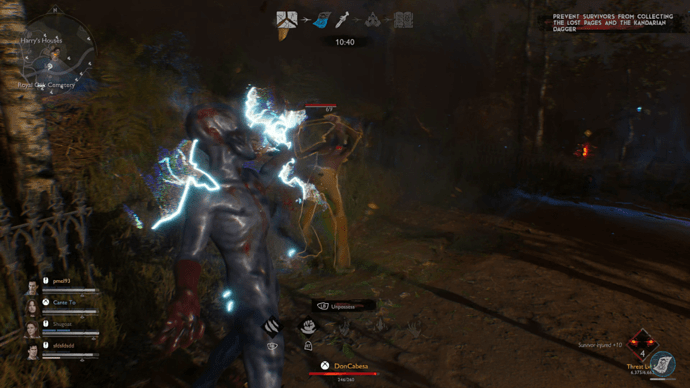 Evil Dead: The Game is pretty damned fun. For how long I’m not sure, but at $39.99 retail at launch, I think it’s well worth the price if you have anyone to play with. Even solo I love playing as the demon and terrorizing at least 2 and sometimes 4 versions of Bruce Campbell. Post-launch support will help this title sink or swim in the long run, but at launch, this Deadite by Daylight is a damned good time.

One thing I am surprised about, the graphics not being all that. I remember gameplay footage a year ago or so and that looked really damn impressive. Sounds like some kind of downgrade has taken place. Also surprised this wasn’t a surprise Game Pass drop.

One thing I am surprised about, the graphics not being all that. I remember gameplay footage a year ago or so and that looked really damn impressive. Sounds like some kind of downgrade has taken place. Also surprised this wasn’t a surprise Game Pass drop.

It’s not ugly, the graphics keep the atmosphere nicely but everything does seem grimey/smeared over.

picked this up today (after a week of hearing good things about it, including this review) and really enjoying it. great use of an IP. though, i would hesitate to recommend it if you didn’t have friends also playing it.